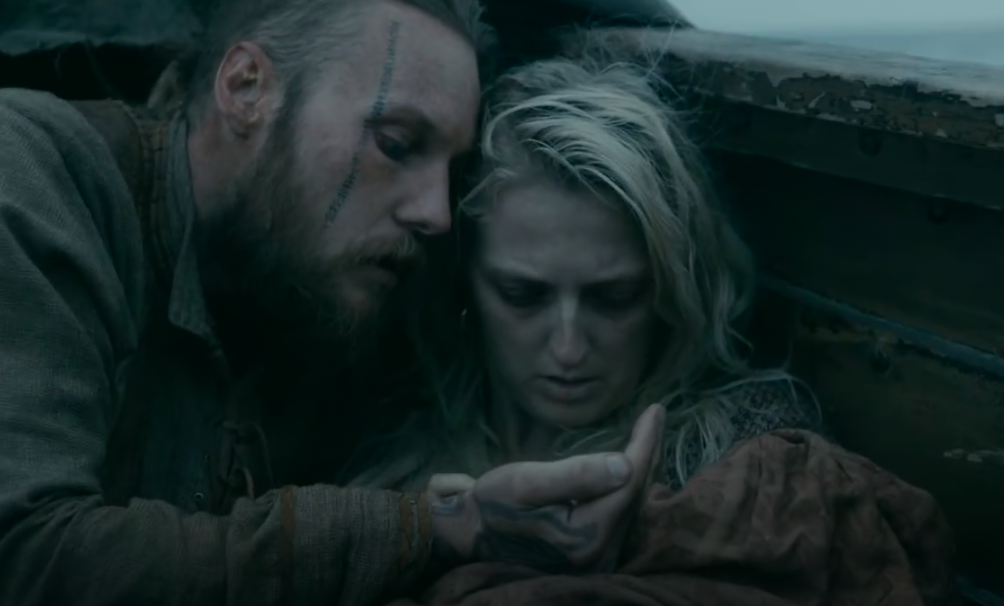 “Of course I do not trust them; they lie about everything.”

While there’s little question it’s King Harald’s mission to conquer Wessex that garners the bulk of our attention in this episode, it’s the final gasp of Ubbe and the Greenland survivors that captures the indomitable spirit of the Vikings. During Vikings six year run, we’ve witnessed unspeakably horrific acts both on the battlefield and behind closed doors, but “The Raft of Medusa” demands we glimpse another dark side of the human condition that transcends the physical plane and puts on display the human cost of the desire for greatness.

It’s easy to forget the consistent excellence Vikings displays in both its extended battle sequences and individual combat fights, and while the brief three minute skirmish between Ivar’s troops and Wessex’s soldiers continues that trend, it’s time to recognize the outstanding work performed by the makeup crew. The first glimpse we get of Ubbe (Jordan Patrick Smith), Torvi, and the others as they drift helplessly at sea, retains its emotional power because we’re struck by hollowed eyes and discolored skin of both the living and the dead as they lie huddled in the boat.

While it has certainly experienced some narrative high points, Floki’s tale has, for the most part, felt like an afterthought as the settlers struggle to get along first in Iceland and later in Greenland. However, it’s the mercurial behavior of Kjetill that forces Ubbe to orchestrate an unplanned escape from the inevitable chaos that shapes a storyline searching for meaning. The theological issues that Ubbe and Othere contemplate become central to the arc as both men desperately call on their god for help. Though neither man will admit it, the thought that they’ve been abandoned makes this struggle almost impossible to bear.

At this point in the series, the stakes for all the characters rise exponentially, so it would come as no surprise to see this aspect of the story tragically end. However, when Ubbe spies land off in the distance, Torvi’s failure to confirm his assertion momentarily leaves viewers with the idea that it’s a hallucination. But the spirits of those left alive rise as land is indeed within striking distance, and Ubbe begs Othere for forgiveness in an especially moving exchange. Is this the “golden land” predicted by Othere, but more to the point, where exactly do they find themselves?

So while Ubbe’s settlers pray the gods have answered their prayers, Harald leads the men and women of Kattegat to Wessex for a showdown with King Alfred. Ingrid (Lucy Martin) proves to be much more capable than she appears, and when she questions whether Harald has any intention of returning alive, the political intrigue ramps up. To the end King Harald Finehair (Peter Franzén) stands as a character difficult to read. Once seen as exceptionally ambitious, he now senses “things are coming to a conclusion,” and in a somewhat shocking maneuver assigns Erik and Ingrid to rule in his absence. One of the shadier characters to join the Kattegat community, Erik’s (Eric Johnson) desire for power and for Ingrid to share his bed sets up one of the more satisfying developments in the episode.

It’s rarely a good idea to underestimate a witch, but that’s exactly what Erik does knowing full well she won’t think twice before using her power on the self-proclaimed kingmaker. “I make myself king, and you will be my queen,” he tells her, seemingly assured Harald will never return to Kattegat. Ingrid’s beauty is now eclipsed by the force of her sorcery, and watching her forage for roots and herbs before sensually brewing a spell to remove Erik from her path, reminds us of the valuable role the supernatural plays in Vikings. When she asks her goddess and the potion to “do your work,” it’s not initially clear what she seeks. Harald dead? Erik? Both?

Before we feel too sorry for Erik, let’s remember he previously sold Ingrid into slavery, and it’s certainly reasonable to consider that she perceives his current proposition as simply another form of bondage. Watching Erik stumble around the room unable to see neatly sets up Ingrid to take control in Harald’s absence. She’s learned a lot from the men in her life, and it will be fascinating to observe how she decides to rule the town. Will her reputation as a witch hinder or aid her ability to govern? With Erik now on the sidelines, it’s not clear whether she has anyone left in her corner to protect her now that she’s alone on the throne.

Vikings returns to Wessex, and King Alfred (Ferdia Walsh-Peelo) must once again fight to save his kingdom from the heathen army led by Harald and Ivar. This time, however, he doesn’t have the level-headed Ubbe at his side providing tactical advice and emotional support. Set against an Alfred who has not yet grown into greatness, Harald and Ivar sail up the river while Wessex’s king picnics in a meadow laying the groundwork for a battle that could be over before it even begins. Like her Norse counterparts Ingrid and Torvi, Elsewith (Róisin Murphy) is not afraid to challenge her husband, and interestingly challenges his manhood when he decides to abandon the family villa. She’s not wrong to ask what kind of message it sends to the people, but we’re also not sure whether a retreat to Chichester marks a tactical mistake or victory.

On the other hand, Queen Elsewith vocalizes her concern about an issue the people of Wessex must cope with on a daily basis – the threat of another pagan invasion. “Even when they are defeated, they win,” she tells Alfred who can arguably be blamed for giving up too much to broker the uneasy peace that continues to hold. Why does she see what Alfred either can’t see or refuses to acknowledge? “They [Norse army] don’t care.”

There are times when Michael Hirst forces connections between the parallel storylines, but the scene in which Ivar spots the deer in the field is brilliantly executed and speaks to the Elsewith’s concerns. Even though deer presages a trap the English set, it’s still valid to view Alfred as that deer up against the ever evolving Ivar Lothbrok. And it doesn’t take long for Ivar to reveal that he has an enemy other than Alfred. “Seems to me King Harald’s days are probably numbered,” he tells Hvitserk, setting up what could be a dangerous two front war. Will the Norse follow the sons of Ragnar or their duly elected king?

Of course the episode’s title “The Raft of Medusa” makes a not so subtle allusion to the 19th century French painting with a similar name, but the interlocking themes extend well beyond Ubbe and the Greenland refugees. All the major players search for a renewed sense of purpose as they flounder in their present circumstances. The battle lines have been drawn in Wessex and Kattegat, and we wait to learn whether Othere has truly found his “golden land.”