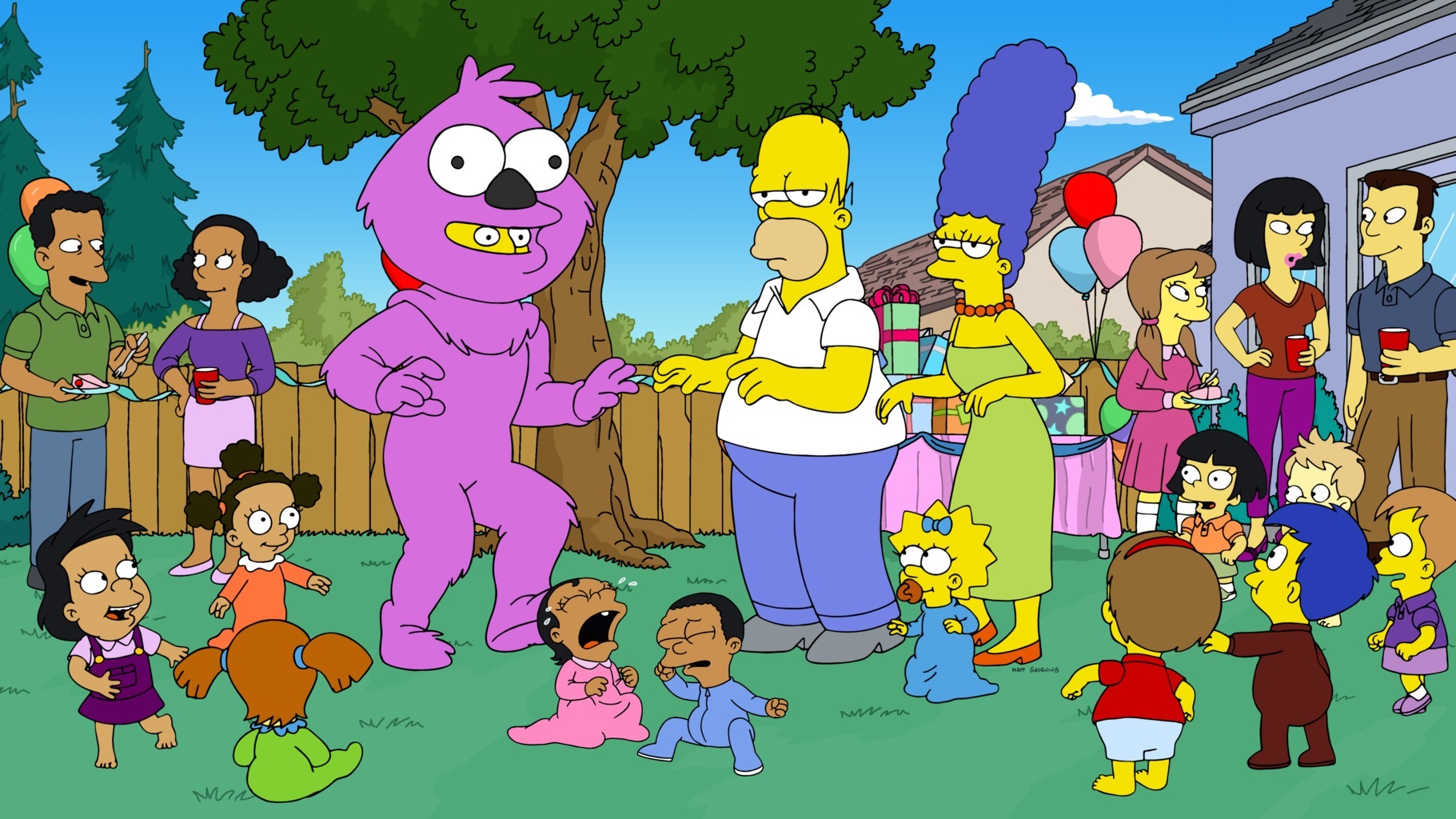 This The Simpsons review contains spoilers.

The Simpsons goes back to the past to make way for the future on Season 32, episode 11. “The Dad Feelings-Limited” is an origin story, revealing the sad and lonely tale of Comic Book Guy. No, it isn’t done in panel layouts, and his super strength turns out to be his greatest weakness.

Comic Book Guy, diversely voiced by Hank Azaria, is a fairly one-dimensional character. He critiques everything he sees, and has no stomach for outside criticism. He’s already got a bellyful of tacos (breakfast burritos on a workday). He doles out droll insults to children too young to understand them.

Like many of the origin stories on The Simpsons, the first order of business is to explain the particular limits of the character. Professor Frink had the Nutty Professor for a dad. Comic Book Guy’s father was Postage Stamp Fellow, played by Dan Aykroyd.

The sequence is slightly reminiscent of the Taxi episode where we meet cab driver Jim’s family. Christopher Lloyd’s presence even looms over this episode in the film parody. But the main difference is that here, it is the one dimensionality of the character which adds dimension to him. The very thing which pushed him into the comic book netherworld is the information he gleans from it, like reading a Classic Comics adaptation.

“The Dad Feelings – Limited” skips not only the couch gag, but the entire opening theme sequence, which is always an early indicator of a good episode. This means there is more meat to the story. We find ourselves in Comic Book Guy’s apartment, right above his store, where he has prepared scones for his mangaka muffin, his wife Kumiko Albertson (Jenny Yokobori).

She has fashioned his five breakfast burritos into a Voltron. They are nerds. They met in the Season 25 episode “Married to the Blob,” when she was visiting Springfield doing research about America’s saddest cities for an autobiographical manga. It was a match made in “Bi-Mon-Sci-Fi-Con.”

They are now living what seems to be the perfect life. And for that they will pay. Their mornings are spent wandering as aimlessly as the plots of the upcoming Avatar movies. They go to Miyazaki marathons. They revel in a happy, carefree life. More than one, if you count their cosplay universes. Meanwhile, Springfield families like the Simpsons are circumnavigating the heedless waters of children’s birthday parties — intolerable, mal-nutritious events where every bouncy castle is a death trap — in the hopeful dreams of visiting parents. After a day of it, Homer and Marge need adults.

The first adult we see is Ned Flanders, and already eyes are rolling across the country, but he is dispatched in a particularly malicious maneuver, with no regrets nor even a pang of conscience. They know they’ll be forgiven. He’s in the left-handed forgiveness business. The grown-ups are gathering at Moe’s, and they’re playing games. Not even adult games, regardless of how much Moe grasps at single entendres for dirty jokes.

It’s Trivia Night at Moe’s and every question is so specialized it looks like the game is fixed. The Simpsons pair up with Kumiko and Comic Book Guy, and of course between the geeky young couple and the domesticated Simpsons, the disparate couples fill in every gap. It works not only as a contrivance, but as a gag in itself.

Kumiko gets the biggest laugh of the night. She actually commands and gets it on demand. The premise of the show is the discussion of having children, but this joke is brilliantly executed. After Kumiko spends time with baby Maggie, we can see her maternal instincts kick in. The transition is expertly muted, and there is a sweetness and innocence in the build-up. Kumiko is timid with Maggie, afraid to do anything wrong, but is brought into the child’s world completely.

Then things turn a little dramatic, what with all the discussion of bringing children into a General Mills cinematic universe starring the Hamburger Helper critter. But in the end, the “Great Resistor,” a hero Comic Guy thinks up in the heat of the moment, is able to frustrate his sexy Greenland gremlin’s deepest desires. Although I don’t for one minute believe she’s been keeping that particular fetish from him.

The discussion at the center is a new one for The Simpsons. Apu’s children came organically, although Marge’s advice also played a big part in that transition. But with Comic Book Guy, we wonder whether a person who spends his entire life dealing with children should actually deal with children. Is he prepared to heat formula when he can’t even cool Kumiko’s baby fever?

The best part of the episode is how the “right” things are set in motion for the wrong reasons. Marge pushes to uphold Springfield’s community standards, but appeals to Homer’s base side to manipulate it into action. The young, unfettered couple can sleep in. They don’t have to lug car seats on airplanes. Even their cosplay sex is good. They can do it anywhere, on a kitchen or bathroom floor, on a new microwave popping popcorn. It is a Simpsons twist to have Homer vow to do “anything to destroy their paradise.” The concept gets two “fehs” for emphasis.

At least Homer and Marge get to “see how the other half dies” in a model crypt. The bit about comparing decomposing in adjoining coffins to “snuggling for eternity” is very goth, and the “Til death, do each other” line is poetry. Bart, however, gets credit for the best couplet of the evening: “Our parents are undead, our dad will eat your head.” Being Mrs. Dracula is all fun and games until you get trapped in a crate full of smooth jazz.

The segment pokes fun at the generational divide. Bart and Lisa put away their cell phones to watch the cemetery showing of “Forward to the Past.” Comic Book Guy points out that a movie screen is “unswipable.” This is also where we see the weakness-as-strength in Comic Book Guy. He realizes he can experience a movie he’s seen a million times for the first time again through the eyes of children, He also realizes “little ones love useless knowledge.” This is the one scenario where his superpowers actually come in handy. It is also his kryptonite.

“Living with your folks, the beginning of the end,” Groucho Marx said in Animal Crackers (1930). “Drab, dead yesterdays shutting out beautiful tomorrows. Hideous, stumbling footsteps creaking along the misty corridors of time.”  Kumiko calls it a place where there is no hope, and Comic Book Guy finds it’s also a place where his sheets haven’t been changed.

Aykroyd throws just enough SNL-consumer-probed-toy-manufacturer-Irwin-Mainway-intrigue into his introduction as Postage Stamp Fellow to pepper it with Ghostbusters suspense. One written gag which works very well is when a crawl explains that a philatelist is a person who specializes in philately. Comic Book Guy comes from a long line of collectible-collectors, from cruel bird houses to antique cricket cages. The house he grew up in displayed everything but love. The sequence also contains a very Rocky and Bullwinkle moment where the narrator, Bob Balaban, breaks the second wall by arguing with a character.

That’s not the only curveball in the episode. We learn Comic Book Guy tried to pitch at his school baseball team and had one devastating specialty throw. It’s what separates the men from the boys and ultimately the villains from the jugheads. The minor trauma of his “worst day ever” is basically a misunderstanding based on the expectation of a disappointment so great even “the left hand of god,” Hall of Fame pitcher Sandy Koufax, could only walk it home.

The Simpsons season 32 has been a standout because it is moving forward into new territory while updating the attitudes of their early seasons. The series is no longer as sloppy as it used to be but they are still putting the Springfield community under a microscope, and looking at the microscope through a telescope. It is as subversive as it has even been, but buries the subterfuge in plain sight, whether it’s well-lit or not.

The “Radioactive Man Re-rises” poster which frames Comic Book Guy and Kumiko as they mingle to create the “interracial nerds in the future” is a subtle double entendre in a pro-family themed entry; Bart and Lisa have to be bribed to act like desirable youngsters. “The Dad Feelings-Limited” is a very warm installment of the series, but it’s got a devious heart. What makes it so funny is how good it looks worn on their sleeve.