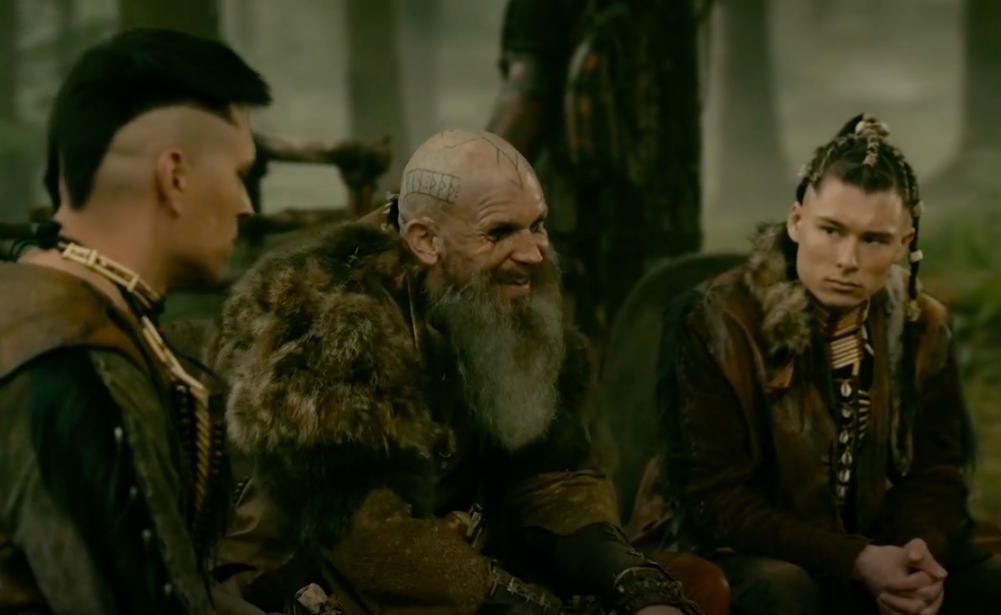 “I left when the sadness became too much.”

There’s a certain sadness that accompanies the moment we must say goodbye to the beloved characters of a television series that captivates so much of our emotional capital and also demands we examine our own spirituality and moral principles. Vikings has reached the end of its run, and while some may find the conclusion somewhat dissatisfying, the acknowledgement that the past must be left behind resonates powerfully not only throughout the series finale, but the entire back half of the season as well.

Some fans of the series left after the death of Ragnar Lothbrok arguing that the writing suffered and the remaining characters lacked the ability to carry the narrative. I am not among them. As a reviewer, I tried to judge each episode on its merits within the context of the overall series, not against the historical accuracy it may or may not have achieved. That said, like many series’ finales, “The Last Act” brings with it a bittersweet close to the glimpse we’ve had into the gradual transformation of the Vikings during the latter stages of the first millennium. Nevertheless, Vikings creator and writer Michael Hirst leaves viewers with three story arcs that reach natural and compelling closures.

Even though viewers have much more investment in the exploits of the sons of Ragnar, the situation in Kattegat bears examination and a bit of praise. With Harald, Ivar, and Erik now dead, Queen Ingrid’s rise to power is now complete, and if the cries of “Long live the queen” are a true indicator of the people’s feelings towards their new leader, we can only speculate what changes lie ahead in Kattegat. We have no doubt that Gunnhild would have successfully led the village into the future, but the question we’re left with is whether the witch Ingrid not only deserves to wear the crown but possesses the wherewithal to carry out the duties the people deserve. Will she rule through fear or love? Have her experiences and those of her freed slave partner given them the insight and compassion to rule for the good of the people? I guess we’ll never know.

We don’t really need to go to the history books to know how the battle in Wessex is going to turn out, but this chapter of the Vikings saga is as much about the growth of King Alfred as it is about Ivar the Boneless and his brother Hvitserk. When Ivar requests a parley with Alfred and admits “we are still fighting like our fathers did,” there’s a brief moment when we think this might turn out differently than expected. Interestingly, before giving his answer to Ivar, Alfred looks to Elsewith as if he’s not certain how to respond. She’s made plain her feelings about her husband’s apparent weaknesses, and whether her steely stare buoys his spirits or not, his refusal reminds us that this is the man who eventually carries the label “the Great” along with his name.

A good portion of the episode is devoted to the battle with Alfred’s Saxon army, and while there’s nothing new here, Hirst, once again, delivers a solid action sequence that makes judicious use of slow motion and quick flashbacks that provide a call back to pivotal moments in the characters’ lives. However, it’s the moments of doubt both Alfred and Ivar struggle with that stand out as they question whether their god is truly with them in this life and death encounter. Ivar remembers the pain of Hvitserk’s desertion to Ubbe only to have his older brother jump ship at the last moment to stay with him in Kattegat. Though he fears the All Father has abandoned him here, we see he still holds out hope that the tide of the battle will change with Divine intervention.

The Lothbrok brothers have enjoyed a tenuous relationship, but as both sense death just around the corner, we’re given a moving exchange when Ivar tells Hvitserk to leave the battle and save himself. This simple gesture is likely the catalyst that propels Hvitserk onto his new path, but it also appears to give Ivar the strength to make his last stand. As he cries out “I will live forever,” it’s difficult to forget the similar ravings of Prince Oleg just before his death at the hands of his nephew. And even though we really don’t need the explanation, it’s a nice touch to have Hvitserk recount that “one day everyone will know of Ivar the Boneless.”

Entering this battle we are fairly certain King Harald doesn’t plan to return alive to Kattegat, and while Ivar’s death doesn’t come as a complete surprise, it’s narrative execution does. We see his leg and will give way several times during the battle, but it’s his final stand that’s a bit puzzling as he allows a young Saxon soldier free rein to kill him. “Don’t be afraid,” Ivar tells the man, but the complexity of this brief scene also includes Alfred who witnesses the event from mere yards away. Despite viewing the Vikings as savages, Alfred watches the tender scene as Hvitserk holds his dying brother in his arms. “Just leave me here with my brother for a moment,” he tells the now kneeling king, who is so moved by what he sees that he immediately crosses himself.  As the camera zooms out to an aerial shot looking down on the three men and Alfred’s burning cross, we can’t help but view this as the Christian God and the Norse gods looking down on these brave soldiers.

However, the larger twist to come out of the Wessex battle occurs when Hvitserk talks to Ivar’s grave and tells him to “enjoy Valhalla, brother, while it still exists.” While leaving the old ways behind has clearly been a central theme of the episode, this statement acknowledges that even their religious beliefs may need to be re-examined. We get our first hint that something’s afoot with Hvitserk when we see him brought to Wessex on a cart after his wounds have clearly been carefully dressed by Alfred’s surgeons. The flash forward to his decision to embrace Christianity and leave the Norse gods behind fits nicely with his father’s curiosity of faith. And how perfect that Alfred tells Hvitserk that from now on he’ll be known as “Athelstan, our brother in Christ.” The call back to Ragnar’s relationship with his Christian friend just works.

And while matters in Wessex and Kattegat get settled, at least for the time being, it’s Ubbe’s new world that holds the most promise moving forward and ends up as the most compelling aspect of the saga. We finally learn Floki’s fate, and while there were likely logistical reasons for Gustaf Skarsgård’s (Floki) absence during the last season, Hirst comes through with a perfectly acceptable explanation while at the same time giving Ubbe a hand in learning to live with the Native American tribe that welcomes them. However, it’s once again the tie-in to Ragnar that can’t be overlooked. “This is what he [Ragnar] was searching for,” and Ubbe understands that they cannot continue in the old ways.

Nevertheless, when Naad asks about gold, we know where this is headed, and Ubbe’s response to the murder of the young tribe member is sure and unambiguous. What’s left to ponder is how the leader Pekitaulet (Carmen Moore) will react to this violent act. There seems to be no question the punishment will be swift and severe, but the initial choice of the Blood Eagle contradicts Ubbe’s desire to move forward rather than look to the past. Had he carried out the punishment, its savage brutality and cruelty may have had the opposite effect Ubbe intends. Fortunately, he changes tact and slits Naad’s throat instead, calling on the “eye for an eye” system of justice. It’s a wise decision.

With Ubbe and Torvi at the helm, it seems likely that the two groups will not only peacefully coexist but actually thrive as they openly share their collective knowledge. Still, it’s wise that Pekitaulet explains her stance in no uncertain terms. “When we said you were welcome to this place, we did not mean you were welcome to possess it.” Even so it’s what happens next that shows the untapped potential inherent in this land. So moved by her words, Torvi hugs Pekitaulet with such emotion that it’s clear, not only do the two women understand each other, they’re in total agreement. It’s a truly beautiful moment.

We knew Vikings would eventually bring an end to its various story arcs, and has typically been the case, “The Last Act” seamlessly blends the three Viking tales into a coherent whole. Perhaps Floki’s advice to Ubbe says it best: “Let the past go.” And so we shall.