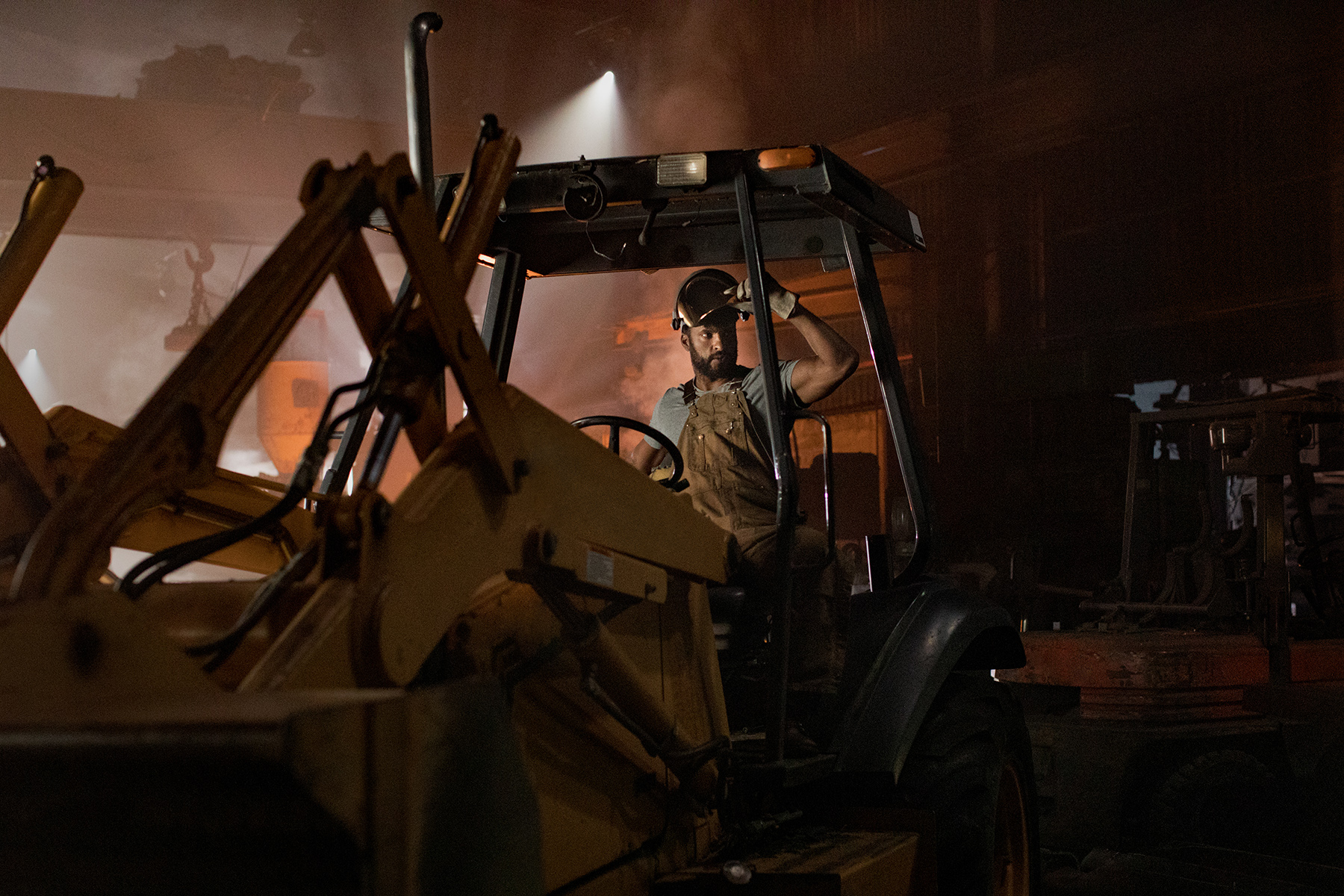 To call the production of American Gods’ first two seasons problem-plagued is to put it mildly; Old Testament Egypt had fewer problems with plagues.

After a successful first season, showrunners Bryan Fuller and Michael Green departed, followed by actors Kristin Chenoweth and Gillian Anderson. In February 2018, Jesse Alexander and original series author Neil Gaiman were announced as co-showrunners for the second season, but Alexander was removed in September 2018 and the lion’s share of the second season was guided by directing producer Chris Byrne and line producer Lisa Kussner. Season 3 now brings new showrunner Charles “Chic” Eglee (Dexter, The Walking Dead), who reunites with Gaiman and deals with another big cast turnover: New Media (Kahyun Kim), the Djinn (Mousa Kraish), Mad Sweeney (Pablo Schreiber), and Mr. Nancy (Orlando Jones) have all departed from the show, with the lattermost cast member doing so in explosive fashion.

When Jones’s option was not renewed in December 2019, the actor released a video on social media in which he accused Freemantle Media and new showrunner Chic Eglee of having racist motivations. Later on in February 2020, Jones criticized American Gods star Ricky Whittle (who plays Shadow Moon) for not supporting him in his view and leaked screenshots of the pairs’ DMs. For Whittle, it was a serious accusation to level. The actor departed The 100 in 2016, publicly accusing showrunner Jason Rothernberg of bullying and unprofessional behavior. Whittle’s brother-in-law, West Ham United forward Michail Antonio, has faced racial abuse throughout his playing career, from youth leagues to the Premier League. As such, it is important for Whittle to share his side of the story.

“I’m the lead of the show, and I’m a person of color who very strongly stands with anyone who’s been unjustly treated,” Whittle says. “I have a strong past of standing up against racism, like my brother Michail. I stand up for women, LGBTQ rights, everything. If I don’t stand with someone, then there is a reason. People should pay attention.”

Whittle goes on to clarify the differences between his departure from The 100 and Jones’s departure from American Gods. Rather than any animosity on the part of Freemantle or new showrunner Chic Eglee, Whittle says that Mr. Nancy leaving the show is driven by the needs of the story.

“It’s a shame. For me, it’s very different to leaving The 100. That was a show that I left for personal reasons. I had a contract and I chose to walk away. This is just story. If you follow the book, you know this story is about Shadow Moon. Mr. Nancy would have definitely have come back, because he wasn’t fired. When someone’s option is not renewed, it doesn’t mean you’re fired. It just means you have a change of contract, and it is up to you to renegotiate that in a different way. We’d have loved to have had him back, but unfortunately things have changed.”

Things have indeed changed behind the scenes of American Gods, and that’s for the better, according to the actors. Whittle, in particular, is pleased by the show’s shift back towards Neil Gaiman’s original book and in a growing sense of stability behind the scenes thanks to the author’s improved availability.

“It’s like any relationship. You work with things, and then something just clicks. This was the most efficient season yet,” Whittle says. “We have had problems trying to figure out what the show was, and how to make it work, because it’s a monster. It has a huge budget, a lot of moving parts. It’s a roadshow, so we’re constantly moving locations. I feel that season three really is a true return to form, with the help of Chic Eglee and Neil Gaiman coming together. They had a lot more time before the season started to really piece together this story of season three and into season four.”

Technical Boy actor Bruce Langley, concurs with Whittle’s judgement, adding, “This season has been incredibly smooth, which has been lovely. Part of that is because we fell back in line with the narrative structure of the book. We knew where we were going, at least in a broad sense. We’ve had Neil there as a constant throughout the whole thing. There’s never been an email that I’ve sent, there’s never been a phone call that I’ve requested, there has never been any part of correspondence that I have requested with Neil, that hasn’t been responded to in a timely fashion.”

If nothing else, having Gaiman back and more available behind the scenes seems to have filled the actors with a sense of confidence in the direction of the show.

“We’ve had probably one of the most priceless gifts in that we’d have the creator of this world, Neil Gaiman,” says Yetide Badaki, who plays goddess of love Bilquis. “And we have had him consistently from season one until now, and that has been such an important anchor. And that has been just a gift because you have this originator so close, and also so open and accessible.”

Part of the Herculean task set before executive producer Gaiman and Eglee is guiding American Gods through its future, including a possible ending point. No show lasts forever, and no tale is complete without an ending. For Whittle, that renewed focus pays off in more efficiency in all phases of production.

“As an actor, we now know our beginning, middle and end, until the end of the story, which is unique for a TV show. Neil and Chic were able to formulate everyone’s story arcs. It just became so much more efficient, because you knew where you were going to take your character. Then production and set design and all the writers knew exactly what they were doing a lot sooner, which for me just makes a more stable ship.”

The increased stability of the HMS American Gods has given the actors a little more freedom in developing their characters, and filling in the blanks left in the bigger picture crafted by Gaiman, Eglee, and the show’s writers’ room. The collaboration that goes into a good scene in front of the camera is buoyed by increased collaboration behind the scenes.

Says Langley, “The writers’ room made a real, real effort to bring us in early and get to know us, and get to know how much we know about our characters. We have been with these characters for four years and as the actor, there are things you are going to know that other people just aren’t. In terms of the broad strokes and the broad arcs, they were outlined, so I knew in a broad sense where we were going. But there were still these lovely tasty little surprises along the way in terms of the specifics of how they got there.”

Whittle echoes the praise for Eglee and season 3’s writing staff, adding, “He brought me into that writing room before the season started, which I’m grateful for, because he wanted to hear my voice. He said, ‘You’re our lead. You’re our hero. What are your thoughts? What is Shadow feeling? We have such an incredible cast with so many voices; I need to hear all these voices.’ You can’t have diverse, authentic voices on camera without having them in the creative process.”

According to Whittle, Eglee created a writing room that was 10% straight white male, but also consisted of Black, Latinx, biracial, LGBTQ, and formerly incarcerated writers because he wanted to hear authentic voices telling truthful stories.

“You’re getting the truth in season three, because we’re all involved. That was down Chic Eglee and Neil Gaiman wanting authentic diversity on screen, which people at home can look to and relate to.”

That focus on diverse people telling diverse stories fits neatly into the universe of American Gods, in which the melting pot of people from around the globe mixed and mingled with indigenous populations in a way that is uniquely American, and is now uniquely represented by American Gods as a television program. When a show involves everyone, it can be anything to any number of people, which to Ricky Whittle, is a selling point.

“Trying to describe this show is impossible. It’s every genre possible. We’ve got comedy, action, drama, mystery… It’s hard to explain, but what it does is provide a great platform to showcase the talents of so many diverse actors, and people behind the camera as well.”

As Badaki says, “The wonderful thing about getting to play gods is that they’re really a distillation of human belief. We get to go into the extremes of human thoughts, of human emotion. The immigrant story about coming from one place into another and trying to find how you as a thread fit into this larger tapestry. If you pull on one thread, you can unravel the whole, and the importance of every part within that definitely resonated with me as an immigrant and a third culture kid.”

A tapestry, from a micro view, is just a bunch of strings. When examined from a distance, those colorful blurs form pictures and tell stories. Story is the driving force behind American Gods season 3, and in order to tell the story, sometimes threads are cut short. Even popular threads, like those woven by the spider Anansi.

“Everyone’s allowed to have their favorites, but at the end of the day, this is a show about American Gods and Shadow Moon,” maintains Whittle. “I loved so many characters in the past where options were renewed or not renewed: Pablo Schreiber, Mousa Kraish, Jonathan Tucker, Betty Gilpin, Kristin Chenoweth. They come and go in this story about Shadow Moon. That’s the most important thing. A lot of things have been said, but I just ask people to watch the trailer and to watch the show to see the truth behind the story of diversity that we have showcased on this show.”