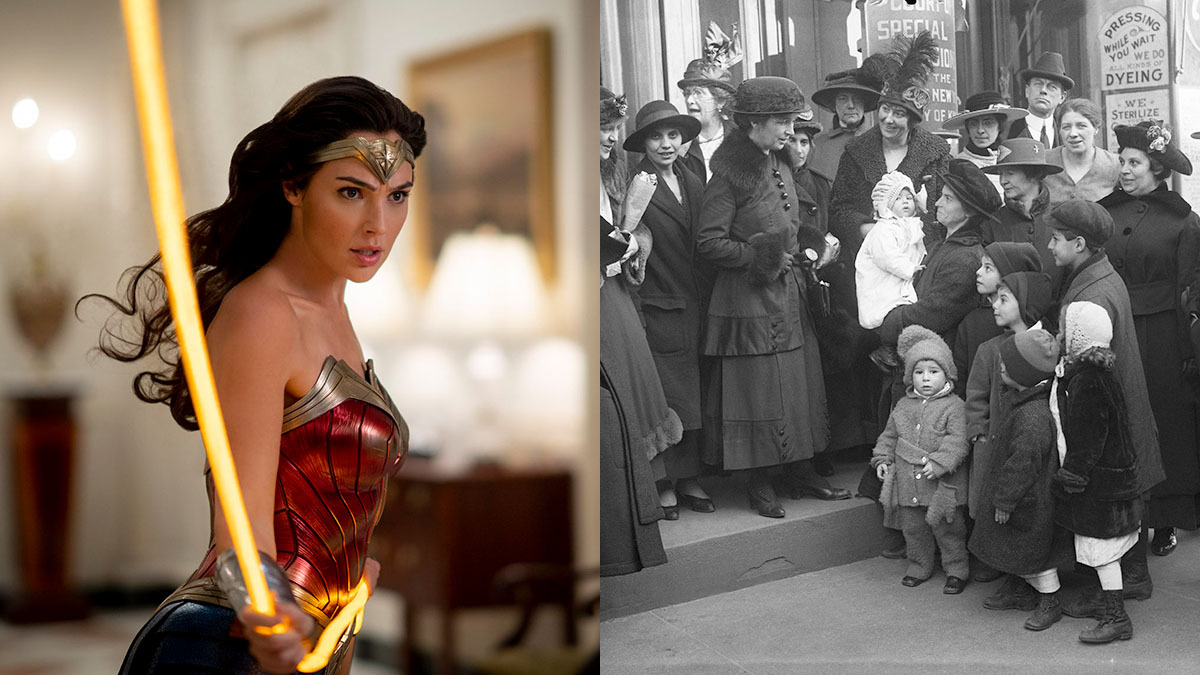 This holiday season, one of the few bright spots for families unable to go to theaters—and even those who did—was Patty Jenkins’ Wonder Woman 1984. An ambitious and vibrantly colored celebration of heroism in all its forms, including those that don’t end in fistfights, it’s a superhero movie that’s won as many fans as detractors. But while basking in the new spectacle is well and good, it’s also worth considering how it came to be. For even in this HBO Max tentpole, one can still see how the feminist movement of the early 20th century is grafted into the very DNA of the Wonder Woman character, her origin, and even her most contentious iconography… something that rarely gets acknowledged in the broader comic fan community.

The character of Wonder Woman was created by Dr. William Moulton Marston in 1941. A psychologist with an eclectic career, Marston went from inventing the lie detector test while still an undergraduate at Harvard in 1914 to being essentially blacklisted from academia by the age of 33. But of course his most enduring legacy came afterward; it came when he engineered a superheroine intentionally designed to be a great role model for girls and boys.

As Marston famously said, “Frankly, Wonder Woman is psychological propaganda for the new type of woman who, I believe, should rule the world.” However, the actual political and sociological influences on Marston and the women who helped him create Diana are often overlooked, even as the character has come to dominate pop culture.

Marston, rather infamously nowadays, lived a polyamorous lifestyle with his wife Elizabeth Holloway Marston, and a second partner named Olive Byrne. Byrne is often credited in the 21st century as the inspiration for Wonder Woman (instead of a wedding ring, Marston gave her two bracelets that are identical to those worn by Diana Prince). Yet it is very likely that Holloway Marston had just as much influence. After all, she was a lover of Greek antiquity and until her death kept a book of Sappho’s poetry from the island of Lesbos within reach.

Still, it is Byrne’s influence that historian and esteemed Harvard professor, Jill Lepore, most untangles in her riveting portrait of the Marston family, The Secret History of Wonder Woman. Lepore, who holds the title of David Woods Kemper ’41 Professor of History at Cambridge, zeroed in on Byrne’s relation to the early feminist movement at the turn of the century and its impact on Marston, recasting Wonder Woman as a bridge between the suffragist movement and the generation who grew up reading Wonder Woman comics before fighting for the “women’s liberation movement.”

Olive Byrne was born in 1904, the daughter of Ethel Byrne and the niece of Margaret Sanger, the latter of whom founded what became known as Planned Parenthood (Margaret also coined the term “birth control”). In 1916, Ethel and Margaret opened in Brooklyn the first United States birth control clinic, and received jail time at a workhouse for their trouble. There Ethel nearly starved to death while going on a hunger strike. During this time, a 12-year-old Olive Byrne was being raised in a Catholic orphanage because her father and grandparents had died, and Ethel Byrne was not interested in raising her daughter.

Despite their absence, Olive held her mother and aunt’s politics in high regard. And those ideals would reverberate in Wonder Woman comics too. They were thoughts informed by the circle of New York intellectuals and early 20th century socialists Margaret and Ethel interacted with in Greenwich Village. Among their contemporaries were Upton Sinclair, Emma Goldman, and a very notable Lou Rogers.

Lou was actually named Annie Lucasta Rogers, but because she was told she couldn’t get work as a woman cartoonist, she initially submitted her work as “Lou” via the mail. Her historic drawings of women being able to finally break off the shackles of patriarchy by using the right to vote are echoed throughout Marston’s Wonder Woman comics, just as much as the author’s own fascination with male and female domination and submission.

In the 1910s, feminists and suffragist literature was rife with Amazonian imagery that would live again in the pages of DC. For example, Max Eastman published in 1913 a book of verse called Child of the Amazons and Other Poems. In it, an Amazonian girl must confess to her queen that she has fallen in love with a man. Yet Amazonian law forbids any warrior to marry or bear children until she has produced significant change in the world. Thus the young Amazon abandons her romance, stating she won’t seek love again until “the far age when men shall cease / their tyranny.” This is echoed in Wonder Woman comics as Diana repeatedly, and flatly, refuses to marry Steve Trevor.

In one classic Marston story, a dopey Steve whines, “Angel, when are we going to be married?” Diana coolly fires back, “When evil and injustice vanish from the Earth!”

More appropriate still is Inez Haynes Gillmore’s Angel Island. Published in 1914, after Gillmore co-founded the National College Equal Suffrage League, Angel Island envisions five American sailors who are shipwrecked on an island that’s crawling with “super-humanly beautiful” women with wings. Driven mad by lust, the men capture the women and cut off their wings, leaving them helpless as none has ever walked with their feet. But eventually one of the angels leads a violent revolution “with the splendid, swinging gait of the Amazon.”

This too echoes early Wonder Woman stories of the heroine being chained or rendered powerless by men who would wish to dominate her in every sense of the word. It is, after all, the fate her mother Hippolyta had to free the Amazons from in bloody battle.

Men trying to chain Diana or rob her of her powers by either bounding her bracelets together or removing them was also a common occurrence in ‘40s Wonder Woman comics, particularly those authored by  Marston. In one memorable Marston story, a man unaware that Diana Prince is Wonder Woman even chains her to a stove so she cannot leave the kitchen. Diana retorts with a smirk, “How thrilling! I see you’re chaining me to the cookstove. What a perfect caveman idea!”

The year of 1915, meanwhile, saw the publication of Charlotte Perkins Gilman’s Herland, another feminist tale of an uncharted utopia of only women. For thousands of years, this lost paradise’s women have reproduced asexually, not unlike how Diana is born to Hippolyta in the comics after the Amazonian Queen sculpts her out of clay. These women of “herland” know nothing of fear, war, or even basic concepts of property. Unfortunately, three male American students find them and fall in love, each marrying one woman. But then each is thunderstruck that they cannot consummate their relationship whenever they want. In this thinly veiled allegory about the need for birth control, two of the men are banished when one tries to rape his wife, and another expresses confusion as to how rape can be a crime in marriage.

“The women [of Herland] are Amazons because, in the nineteen-teens, reporters routinely used the name to describe suffragists,” Lepore said in a recent article in The New Yorker. “So did suffragists themselves in both the U.K. and the U.S., including Elizabeth Holloway.”

The writers of these stories were also contemporaries and even sometimes neighbors of Olive’s mother, Ethel. And just as Olive helped introduce a worshipful admiration for her aunt Margaret Sanger and Planned Parenthood to the Marstons, with whom she built an unorthodox home, so too did she seemingly inform (along with Holloway Marston’s love for antiquity) what became the Wonder Woman origin story, which was recently given new life by Jenkins and Gal Gadot in 2017’s Wonder Woman.

There is of course the question of whether the new movies fully embrace these legacies. Lepore, for one, is skeptical, writing in 2020 that “Patty Jenkins seems to be interested in history… But she’s apparently not at all interested in the history of women: it’s got no place in either of her two ‘Wonder Woman’ films, even though they both take place during major inflection points in that history.”

However, the hard-won victories of that history, and how Marston seeded the ideals of its first wave into his comics, is still inextricably linked to Gadot’s Wonder Woman. We see it when she stands with a near divinity over Chris Pine on a beach in the 2017 movie, unaware and undisturbed by the preconceived limits a patriarchal society would place on her; and we see it when Wonder Woman can defeat villainy and greed in Wonder Woman 1984 without having to throw a single punch.

So for whatever bondage iconography that also clearly seeped its way into Marston’s creation, there is a definite through-line of a century’s worth of feminist ideals that connect the fantasies of the suffrage movement to the icon of female empowerment that the women’s liberation movement claimed Wonder Woman to be when she was placed on the cover of Gloria Steinem’s Ms. magazine in 1972. And a hundred years later, it lives on like Amazons and angels on the big screen.