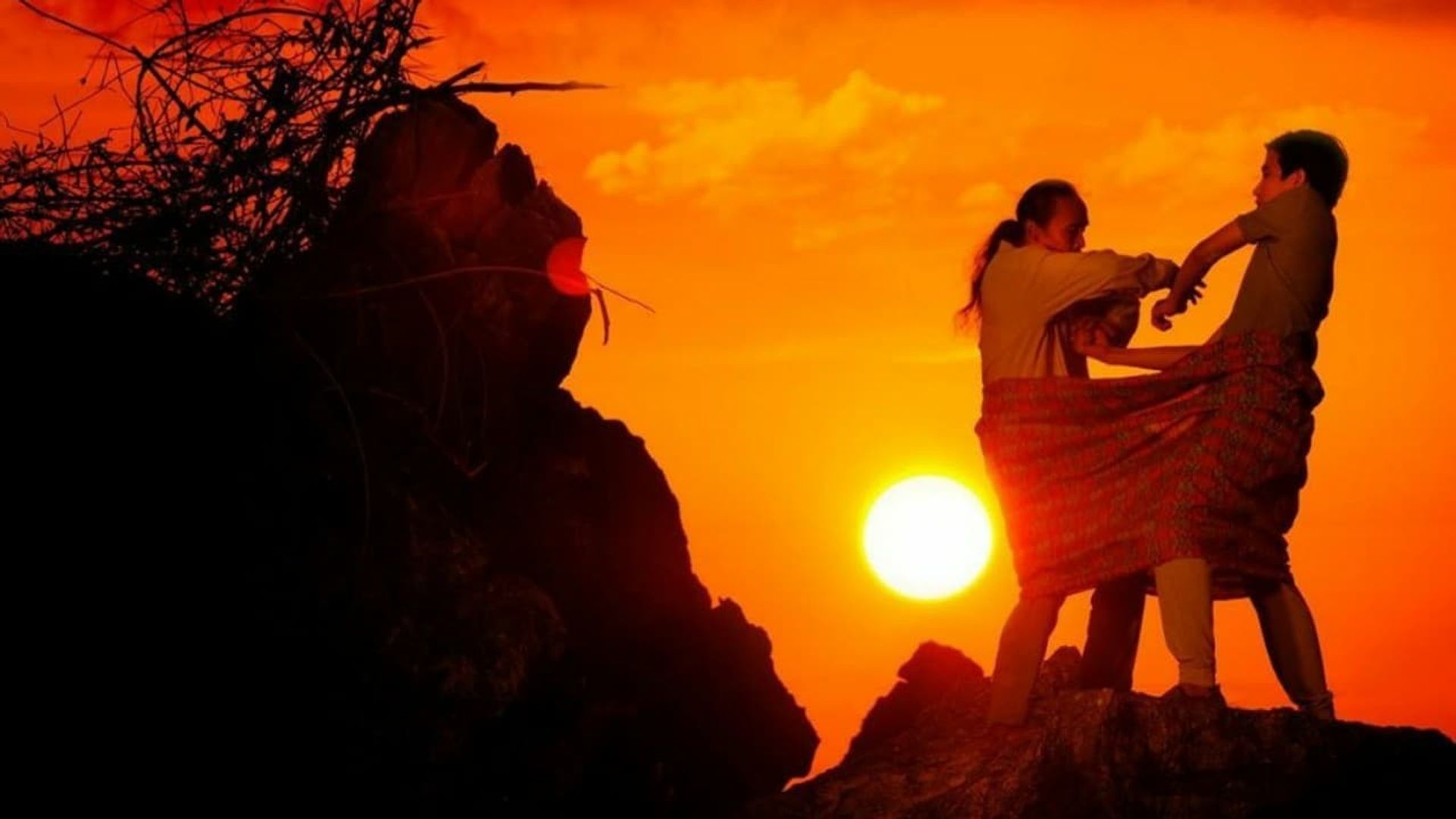 Cobra Kai season 3 is the first major streaming hit for Netflix in 2021. With each of the 10 episodes having running time of around a half hour, it makes for a quick binge overall. Dedicated fans inhaled the show in the first weekend and craved more.

Unfortunately, Netflix carries only one other film from the original Karate Kid franchise and it’s the outlier. The Next Karate Kid was Pat Morita’s final appearance as the venerable Mr. Miyagi. The film also introduces two-time Oscar winner Hilary Swank in her first lead role as Julie Pierce. However, The Next Karate Kid was a flop. Morita is the only connection to the three previous films and despite Swank’s impressive breakout performance, Julie fails to carry the chemistry that Daniel-san (Ralph Macchio) had with Miyagi.

So where on Netflix can fans get their next Karate Kid fix? How about Indonesia?

Netflix exclusively released Tarung Sarung on New Year’s Eve, one day prior to the Cobra Kai season 3 premiere. The movie was originally slated for Indonesian theatrical release in April 2020, but it was postponed due to the global pandemic like so many other films last year. Tarung Sarung is a loving homage to The Karate Kid. It follows the story of Daniel and Miyagi, with some regional twists. Deni Ruso (Panji Zoni) is Daniel. Get it? Deni Ruso is Daniel LaRusso.

Just like Jackie Chan and Jaden Smith’s redux of The Karate Kid, Tarung Sarung mirrors the major plot points of the original but includes many deviations beyond being set in a different country. Instead of being a poor kid from New Jersey, Deni is among the entitled rich, the heir to the third richest family in the country that runs Ruso Corp, a major capitalist development firm. However, he’s a spoiled bully who flaunts his wealth and abuses his position.

As punishment, his mom, Dina Ruso (Imelda Therinne), the family matriarch, sends him away to Makassar. Deni is stripped of his bodyguard and no longer has access to his credit card, but is given two bumbling assistants played by an Indonesian comedy team, Gogo (Doyok SuperDJ) and Tutu (Jarot SuperDJ). The excuse is that Deni is supposed to oversee the controversial Ruso Corp development project to convert a local beach to an amusement park. There on the beach, Deni meets a local gal named Tenri (Maizura). Upon seeing that she is protesting the Ruso Corp development, he hides his identity for a prince and the pauper subplot. Tenri invites Deni to a beach party, and from there, The Karate Kid takes over.

Deni meets Tenri on that beach and is confronted by Tenri’s suitor, Sanrego (Cemal Faruk), who is the local sarong fighting champion. Tenri is Ali (Elizabeth Shue) – both with an ‘I’. Sanrego is Johnny (William Zabka). Sanrego is also the name of an Indonesian herb used for male fertility and this character has clearly overdosed on it as he constantly harasses Deni.

Tarung Sarung means ‘sarong fighting.’ A sarung – or as it is more commonly spelled ‘sarong’ – is a traditional piece of fabric worn wrapped around the body in much of southern Asia and parts of Africa. The style used in this film takes the shape of a cloth tube that is folded and worn like a kilt for men. Tarung Sarung depicts a unique form of one-on-one dueling where two combatants step into a single tubular sarong together and beat the crap out of each other. It’s not the ‘Karate’ Kid. It’s the Sarong Kid.

From there, references to The Karate Kid come fast and furious. Deni goes on to get revenge on Sanrego, but not by hosing him down while he tries to roll a joint. Nevertheless, it’s still in a bathroom – an outdoor platform over a pond used as an outhouse. As Sanrego goes to relieve himself, Deni kicks down the platform causing him to plunge into a cesspool pond.

After that, Sanrego’s thugs chase Deni and beat him again, but he is rescued by Pak Khalid Rewa (Yayan Ruhian), who trains him in the esoteric ways of sarong fighting. Instead of wax on wax off, its mosquito catching, water carrying, and sandal rearranging. There’s even ‘balance on the bow of the canoe’ training just like Daniel did.

What’s more, Deni makes a blatant nod when he spies some original posters for The Karate Kid at Tenri’s home. She tells him it was her favorite film, and Deni asks if Jackie Chan was in it. Tenri retorts by asking how a movie called The Karate Kid could be about Kung Fu (For the record, Jackie’s redux was retitled Kung Fu Dream in China). Ultimately, Sanrego and Deni agree to settle their differences at the titular Tarung Sarung tournament, which is where the finale fight takes place. However, the tournament goes a little farther off the deep end than Daniel’s crane kick win.

From Star Wars to John Wick

For fans of the martial arts genre, keen eyes will have dialed into the actor cast in the Miyagi role. Yayan Ruhian has been a leading martial arts star since Indonesian cinema caught global attention with The Raid: Redemption. This cult classic, along with the sequel The Raid 2, put Indonesia on the map when it came to brutal sanguineous martial arts mayhem. It earned Ruhian a cameo as Tasu Leech in Star Wars: The Force Awakens.

More recently, he brought the fight to John Wick: Chapter 3 – Parabellum as Shinobi #2. Ruhian is a genuine master of the martial art of Pencak Silat and it shows. He moves with a lethal grace that can only be achieved by an authentic master.

Indonesia is the 4th most populous nation in the world, and their indigenous cinema has been steadily growing for years, mostly in the wake of The Raid. But for most westerners, it’s just getting onto their radar. Ever the cinematic avant garde when it comes to global distribution, Netflix has been bringing over a fair amount of Indonesian content lately. The production values on most Indonesian films are good and Indonesia makes for some intrinsically interesting and colorful backdrops. The Makassar village setting of Tarung Sarung is bursting with seaside color and local charm. However, many Indonesian film plots are derivative of Chinese, Japanese, and Korean cinema. When Tarung Sarung steals an entire script from Hollywood – ‘80s Hollywood at that – you know they aren’t above poaching stories.

Uwais and Rahman were also in The Force Awakens and Rahman was in Parabellum. As the protagonist in The Raid, Uwais has made the most progress with lead roles in Stuber, Mile 22, and the Netflix original series Wu Assassins. He will also appear as the “Hard Master’ in the upcoming Snake Eyes: G.I. Joe Origins.

Taslim appeared in Fast & Furious 6 and Star Trek Beyond, along with a key role in the Cinemax original series Warrior. He’s cast as Sub-Zero in the upcoming redux of Mortal Kombat.

Rahman and Estelle have remained mostly in Indonesia. Rahman is spearheading the convergence of an indigenous superhero comic series to film. The first installment was Gundala. And the next chapter, Satria Dewa: Gatotkaca, also stars Ruhian.

Estelle is the only one who learned martial arts for movie roles (the others fell into acting after being successful martial arts champions and teachers). She’s more of a scream queen having starred in several Indonesian horror films like The Chanting trilogy, Macabre, and the martial arts infused The Night Comes For Us. Indonesian martial arts films have been the cutting edge of ultraviolence for the last decade with visceral and complex fight choreography and these actors have led the charge.

The most engaging aspect of Tarung Sarung is its Indonesian perspective. There are a lot of moral lessons that engage issues of environmentalism, class separation, capitalism, and Islam. Sarong fighting is portrayed as a duel of honor, one-on-one, not like the gang fights in the big city.

With Ruhian’s influence, it is based on Pencak Silat, which is an umbrella term for a wide range of martial art styles from across South Asia. Here it is intimately connected to Islam. Khalid is a religious leader of a mosque, and just like Shaolin monks espouse Buddhism, Khalid’s martial lessons are intertwined with Islamic wisdom.

As Khalid teaches, he preaches, and his sagacious words are accompanied by a soundtrack of Islamic chants. Even Tenri contributes lessons in Islam. Tenri wears a hijab, and in one scene, she defends her tradition to Deni, who claims to be an atheist. When Deni is first presented with Islam, he regards them all as terrorists, but soon learns otherwise. Deni’s martial epiphany isn’t a crane kick. It comes from his faith.

Tarung Sarung takes some liberties in stating that sarong fighting will be included in the 2024 Paris Olympics. It’s complete fiction – sarong fighting isn’t even in consideration. Ironically, the next new martial Olympic event will be Karate. Karate was slated to be included at the postponed 2020 Tokyo Olympics, which will hopefully be held this summer. Nevertheless, with the Olympic fabrication, Tarung Sarung teases a sequel.

The Karate Kid is a tough act to follow. Even Jackie Chan and Jaden Smith with a $40 million budget could not eclipse the popularity of the original. Tarung Sarung falls short too. The fight choreography is mediocre, but then so was the choreography in The Karate Kid. Yayan is solid in his scenes but he doesn’t fight nearly enough.

Despite its shortcomings, Tarung Sarung offers a nice slice of Indonesian life and Muslim philosophy. But with a nearly two hour running time, that might not be enough to sustain it for newbies to the Indonesian cinema. Nevertheless, it stands as a testament to the universal appeal of The Karate Kid. And if you really need a Cobra Kai fix, Tarung Sarung is a dose of some Karate Kid methadone.