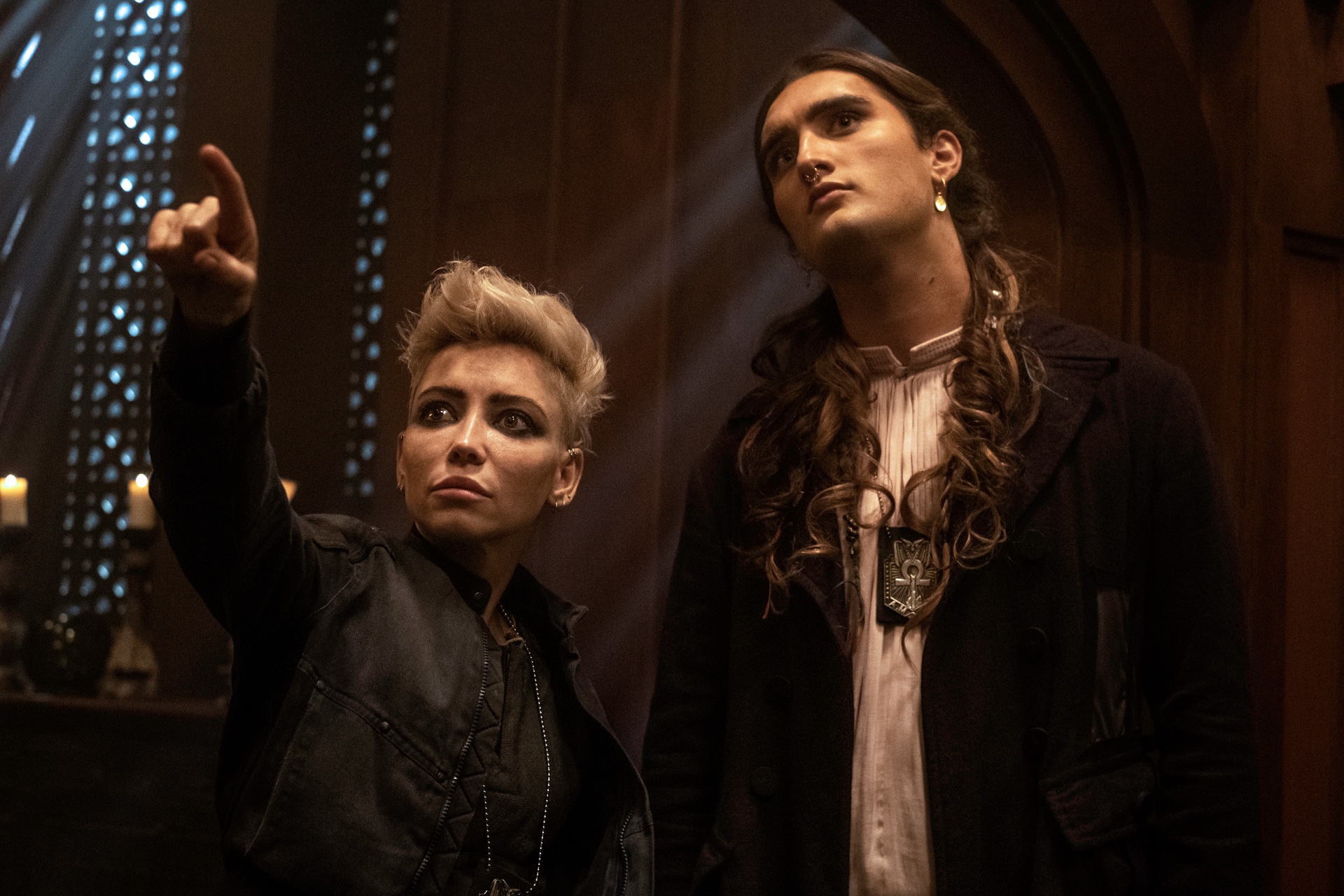 The newest episode of The Watch takes the departure from the original Terry Pratchett Discworld series even further, so that only the names of the characters and some slight bits of characterization resemble the books at all. Instead, it sends viewers down the plot toward what looks like an eventual showdown between the villainous and driven Carcer and his one-time friend, now Watch Captain Sam Vimes.

Previously, Carcer stole a book from the Unseen University Library that enables him to summon a dragon—but not control it. Now, both Carcer (with the help of a female, self-taught wizard, who formerly worked as a servant at Unseen University) and the Watch are after an artifact that allows its user to control the dragon. Carcer intends to burn all of the sprawling urban Ankh-Morpork to the ground. The Watch intends to stop him.

At the end of episode 2, we find out that Lady Sybil Ramkin—a vigilante who has been capturing and reforming criminals, as well as illegally raising a dragon—has some past dark history that prevents her from officially joining the Watch. In the books, Lady Sybil has an uncomplicated backstory. She’s a larger than life character throughout, to be sure, but she has no dark secrets or hidden trauma. When “The Wat” begins, we see that in the alternate universe of The Watch, Sybil’s parents were inhumed (legally murdered by the Assassin’s Guild). She witnessed the inhumation, remaining hidden (the Assassin’s Guild leaves no witnesses); when she turned to the Watch for help, she was assured it was all perfectly legal. This sets up the motivation for The Watch’s Sybil as an anti-guild activist—but is likely to come as a huge disappointment to series readers, who liked her steadier, stable presence in the books.

In the present, Carcer’s wizard ally casts a spell that allows him to see through Vimes’s eyes—focusing on a strong memory between the two of them. Since the two have an epic falling out in their past, an event introduced in the first episode on which the series hinges, Carcer has a perfectly strong memory to connect them. It’s a fantastic way to spy on the Watch, although since Carcer has been one step ahead of them since the show started, it’s curious why he’d think he needed to know their moves in order to find the artifact.

The Watch, meanwhile, is forming a plan, with the help of Sybil. They’ve uncovered that the artifact in question is likely to be in the basement of the Assassin’s Guild, and Sybil volunteers to infiltrate. She has an assassin’s mask, which would allow her to waltz into the building unchecked, and she can let the Watch in through a basement entrance to the adjoining building.

CHEERY: So we need to get into the building next door.
ANGUA: Who would be stupid enough to base themselves next door to the Assassin’s Guild?

The reveal to that question is a nod, but only a very shallow one, to the book series, where the Fool’s Guild is located in the adjacent building. Here, however, it’s the Musician’s Guild, and the only way for the Watch to get access to the basement is to join the guild themselves.

What follows feels more like an excuse to show off the capable musical talents of the cast than anything related to the plot. Cheery’s Jo Eaton-Kent is a capable rocker, and if Adam Hugill as Carrot is actually playing the drums, he could have a second career in music. The show absolutely stretches the boundaries of disbelief, asking viewers to accept that this group of four coppers could not only pass themselves off as musicians (in amusingly punk costumes, which Richard Dormer’s Vimes looks as uncomfortable in as one would expect), but rock out together with such aplomb. It’s funny, but so silly it’s hard to stay engaged in the story.

Inside the Assassin’s Guild, after Sybil engages with another assassin about his mask in one of the episode’s actually funnier moments, she spots the assassin who murdered her parents and abandons the plan to get the artifact. Instead, she decides to take her revenge, staring down her crossbow at the villain. When Death shows up to ask her if she’s actually going to kill him (she’s being indecisive, and he’s on a schedule), she ends up almost losing her shot. She follows the killer back to a different room, only to discover he’s been taking jobs on the side—thus committing tax evasion, one of the crimes the Watch can actually arrest an assassin for. Sybil rejoins the Watch, who’ve found their way into the basement on their own, bringing the assassin (Inigo Skimmer, whose name is taken from an assassin from the books but shares no other qualities) with her. They discover the artifact has already been stolen, Vimes discovers that Carcer’s spying on him with magic, and they get out of their encounter with the Assassin’s Guild alive (relying on a technicality of the law to do so).

This episode spends a lot of time establishing a dark, unnecessary background for Sybil—which, to be fair, Lara Rossi plays beautifully, with rage and anguish and badassery—and solidifying how the Assassin’s Guild works. There are plenty of attempts at humor, but because the characters are all so serious and wounded, the humor doesn’t really come from them; the show relies on the world to give silly cues that the characters fall into. An “ass” joke (Carrot uses the abbreviation Ass Guild) falls flat, and sound effects meant to provide the feel of satire don’t quite deliver. The best gag, in which the assassins throw three subsequent bricks-with-notes through the Watch’s windows, because they forgot details on each note, feels quite Pratchetty, but has no in-series reference. A hallway fight scene between Carrot and an assassin, which could have been remarkably cool, ends abruptly without any cool stage-combat moves. And a final conversation between Vetinari and Vimes undermines the relationship readers expect from those characters, with Vetinari showing her manipulative hand, and Vimes understanding that he’s being manipulated—and not minding.

I was cautiously optimistic after watching the first two episodes that the show would find its stride, but episode three has not done it, both by moving further away from the source material and by failing to flesh out its own world. There are several episodes remaining in the season, which means The Watch may yet find its strength, but this episode is likely to lose Discworld fans who were trying to give it a shot.