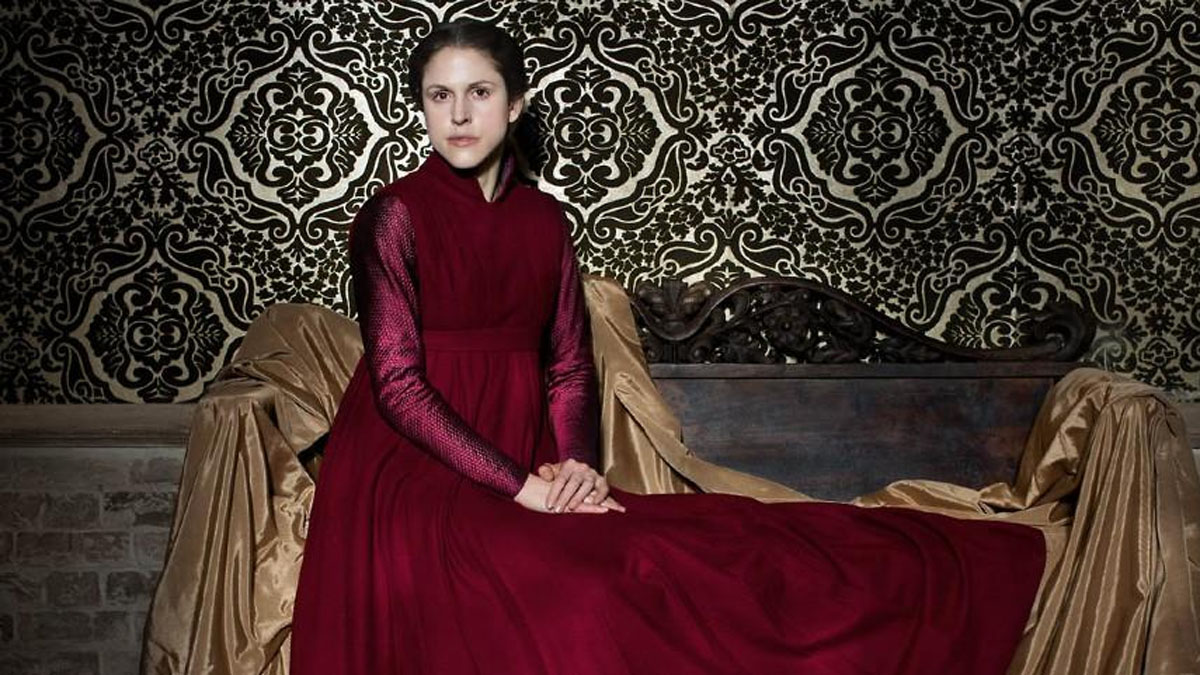 Alongside the sulky real-life Elizabethan playwrights and gruff spymasters of A Discovery of Witches’ second season shines one leading light: Mary Sidney. Styled the Countess of Pembroke following her 1577 marriage to Henry Herbert, Mary Sidney was a celebrated figure in Tudor society with several published works to her name, and close connections to the royal court of Queen Elizabeth I.

Played in the series by Amanda Hale (The White Queen, pictured above, Ripper Street, Star Wars: Episode IX – The Rise of Skywalker), Mary Sidney becomes Diana’s ally during her and Matthew’s Elizabethan time-walk. A beneficiary of the fashion for aristocratic women’s education in the mid-sixteenth century, the Countess is Diana’s intellectual equal, and makes a useful companion for the history of science professor. Born in 1561, Mary Sidney would have been around Diana’s age when they meet in 1590. She conducts alchemical experiments with ‘Mistress Roydon’, aids in her search for the Book of Life, and prepares her for an audience with Queen Elizabeth I.

Mary Sidney’s family had strong ties to the English throne. Her uncle was Sir Robert Dudley, widely rumoured to have been Queen Elizabeth’s lover. Mary’s father was Sir Henry Sidney, who grew up in court as a companion to Prince Henry, later King Henry VI. Sir Henry was later instrumental in the brutal Tudor campaigns on Ireland, and his family spent time in Dublin and Wales while Mary was growing up.

Following the death of Mary’s sister Ambrosia in 1575, Queen Elizabeth I invited her to court and it was there, at the age of 15, that Mary was betrothed to the 38-year-old Count of Pembroke. His first marriages had produced no heirs and he sought a new wife to give him a son.

Mary Sidney had two sons and two daughters with the Count. One daughter died at the age of three while another survived until her early twenties. Both boys, William and Philip, survived into adulthood and in 1623, had Shakespeare’s First Folio dedicated to them as an “incomparable pair of brethren”. The Sidney family were patrons of the dramatic arts and it’s likely that the very first performance of Shakespeare’s As You Like It was staged by The Lord Chamberlain’s men at their family seat, Wilton House, near Salisbury in Wiltshire.

Though shown dressed in a laboratory smock and conducting her own experiments in A Discovery of Witches, Mary Sidney was better known for her work as a poetic translator. An accomplished linguist and scholar, she became acquainted with a circle of poets and writers through her older brother Sir Philip Sidney, who died in 1587, three years before Diana and Matthew’s fictional arrival. Philip died of gangrene after being injured in battle fighting for the Protestant cause in the Netherlands. That same year, Mary also lost both parents.

Before he went to the Netherlands campaign, Philip Sidney was sent away from Elizabeth’s court in disgrace after he publicly expressed disapproval of her plan (very likely a political one she never intended to carry out) to marry the French Duke of Anjou. He stayed with his sister’s family where he introduced her to his circle of literary friends including poet Edmund Spenser, writer of ‘The Faerie Queene’. Mary had several poetic works dedicated to her, and after her brother’s death, published a revised version of his poem ‘The Countess of Pembroke’s Arcadia’. Her French-to-English translation of Robert Garnier’s Marc Antoine is thought to be the first play translated by a woman to be published in England.

A scholar who went on to translate works by Plutarch, as well as the Psalms, Mary Sidney lived almost to the age of 70. She spent her later years in Belgium (where she’s rumoured to have had a relationship with physician Matthew Lister) and died in 1629. Her funeral was held at St Paul’s Cathedral in London, and her body was taken by candlelit procession to its final resting place at Salisbury Cathedral, close to Wilton House. A fitting end for a remarkable woman.

All episodes of A Discovery of Witches are available to stream on NOW TV in the UK, and Sundance and Shudder in the US.