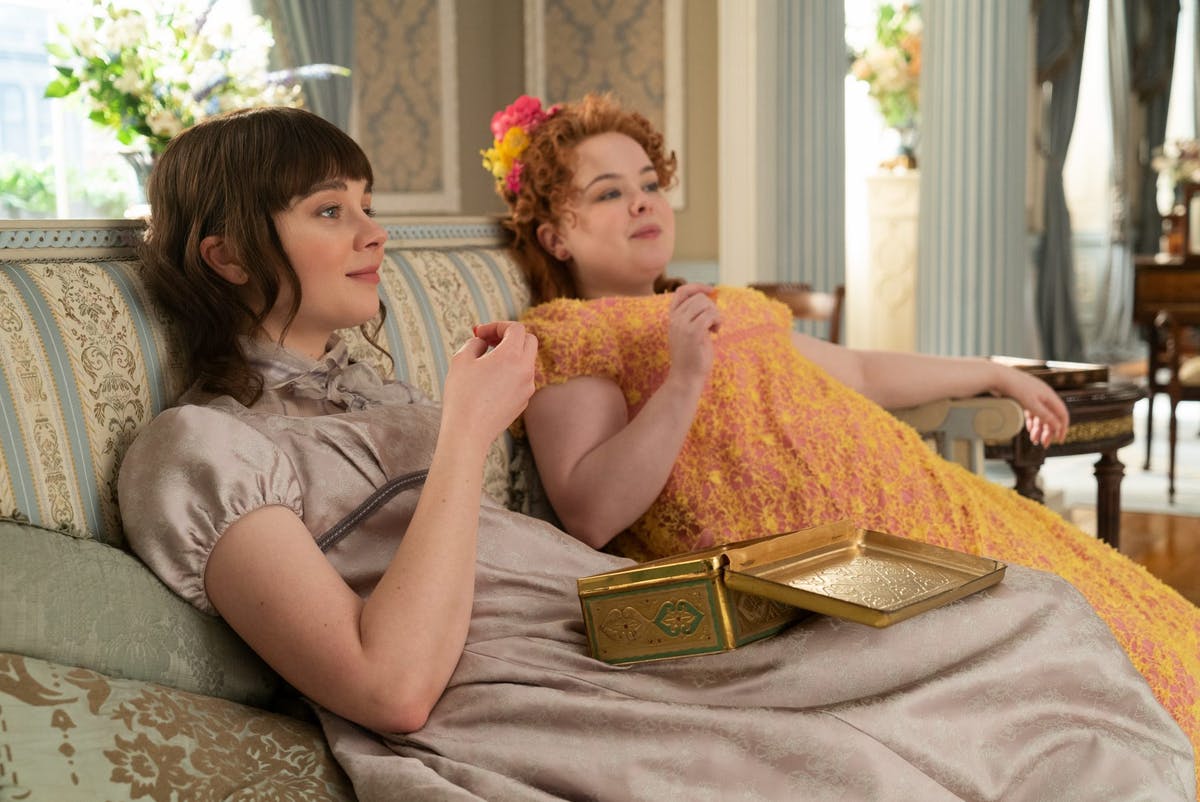 This Bridgerton article contains major spoilers for the season finale.

Netflix’s Bridgerton is, at its heart, a story about finding your person, whomever they may be. And while viewers naturally swoon over the romance between debutante Daphne Bridgerton and roguish duke Simon Basset – and their many, many steamy encounters backed by instrumental Taylor Swift tracks – the show is about much more than the will they/won’t they pull of a specific courtship.

In fact, Bridgerton is full of love stories of multiple varieties, and the show unabashedly centers the affection that exists between parents and children, siblings, and friends as much as it does romantic attachment. But no relationship is as purely enjoyable to watch as the friendship between Eloise Bridgerton and Penelope Featherington, two misfits who feel like outsiders within their own families and find strength and affection through their bond with each another.

In a romance and marriage obsessed world, Eloise and Penelope’s connection stands out because of its refreshing normalcy and easy joy. In short: The pair are simply fun together, and they model a much-needed kind of female intimacy that often gets short shrift in period dramas or that is shoved to the side once an eligible man enters the picture.

Though they literally grew up across the street from one another, the two girls come from very different families. The Bridgerton parents married for love and, as a result, their family is warm and open with their affections, even when poking fun or squabbling with one another. The Featheringtons are colder and more distant, and, thanks to their apparently frequent financial struggles, Lady Featherington often seems to see her daughters as little more than commodities to be bartered on the marriage market. No wonder none of her girls have much in the way of self-esteem.

Despite their differences, Eloise and Penelope’s friendship is firmly grounded in the fact that they accept one another for who they are, oddities and all. Eloise loathes the society trappings that will necessarily accompany her coming out and isn’t particularly interested in marrying well or having children. She covets the opportunities her older brothers enjoy and longs to travel and tell everyone exactly what she thinks of them. Penelope, by contrast, very much wants the exact things her friend disparages but despairs of ever achieving them as a youngest daughter who is often overlooked. (Not to mention constantly dressed in unflattering colors.) Neither has the agency to truly change their circumstances, so it makes sense that they would find comfort in their respective situations together.

Unlike many similar period stories, which often default to placing women in direct competition with one another, Penelope and Eloise’s complex relationship in Bridgerton isn’t based on a shared desire for the same man. Instead, their innate bond stems from the fact that both are girls who fit poorly in the world they currently live in. They each long for a different sort of society, one that allows smart girls like Eloise access to a future that doesn’t involve marriage and motherhood and quiet girls like Penelope a shot at the spotlight on their own terms.

Rather than mooning over boys, the pair spend most of the first season mocking the fripperies of life during the London season, trading stories about their latest familial dramas, and attempting to uncover the secret identity of popular scandal sheet author Lady Whistledown. (Which is a whole other thing we’ll get to in a minute.) At one point the two even put their heads together to try and suss out how babies are made – important information for young women of any era to know, but perhaps a more pertinent question than ever in Regency England, when a whisper of such scandal can ruin a girl forever. See also: Poor Marina.

Importantly, however, their friendship is not presented as perfect or without its trials. Bridgerton smartly gives Eloise and Penelope’s relationship natural flaws, all of which are grounded in their individual life experiences.

Eloise takes Penelope for granted, assuming that her friend will always be willing to listen to her latest crazy Whistledown theory and ignoring the warning signs that she’s spiraling emotionally during the announcement of Colin’s betrothal. Penelope lashes out at Eloise for failing to recognize her own privilege as a Bridgerton daughter who faces less pressure to conform when she has a sister like Daphne breaking the proverbial glass ceiling for all of her female siblings. (The fact that Daphne is now a duchess means that Eloise automatically has more freedom – and, more importantly, social protection  –  when it comes to her own future match.)

Though it stings the heart to watch these two girls at odds, viewers might want to steel themselves for more drama between them in the future. Because Penelope is the same infamous Lady Whistledown that Eloise has spent the entirety of Bridgerton’s first season both idolizing and searching for, and her decision to keep that information from her best friend will likely be hard for Eloise to forgive.

True, we don’t yet know what Pen’s motivation is for assuming the Whistledown identity in the first place, but the embrace of a secret persona does feel like a natural choice for a girl who seems to spend much of her own life afraid to use her own voice. Her secret identity allows her not only to speak boldly for once but also to wield genuine influence in a way she has never had the chance to before. And to her credit, Penelope is at least somewhat judicious in the rumors she chooses to print – for example, she only reveals Marina’s pregnancy to stop Colin from marrying her on a lie.

It’s doubtful that any of this will soften Eloise’s reaction, who will surely be betrayed and hurt that her BFF kept such a secret for so long. And, honestly, she has every right to feel that way. Especially since Penelope was well aware not just of Eloise’s determination to figure out Whistledown’s identity but her idolization of the mysterious woman and the life she’d carved out for herself. It’s possible – maybe even likely – that Eloise will be in awe of all that her friend has accomplished. But it’s hard to picture a version of this reveal that doesn’t drive something of a wedge between the girls.

Yet, Bridgerton obviously trusts the strength of this relationship, and values the affection the audience has invested in this duo. The cliffhanger that leads us all into Season 2 is not a romantic one, after all – Daphne and Simon are happily loved up with their new baby and all three elder Bridgerton brothers end the first season single. Instead, the pairing whose future we’re most concerned about is a friendship, one that’s come to be just as important within this fictional world as any love match. Long live Peneloise, no matter what trials await them in the future.