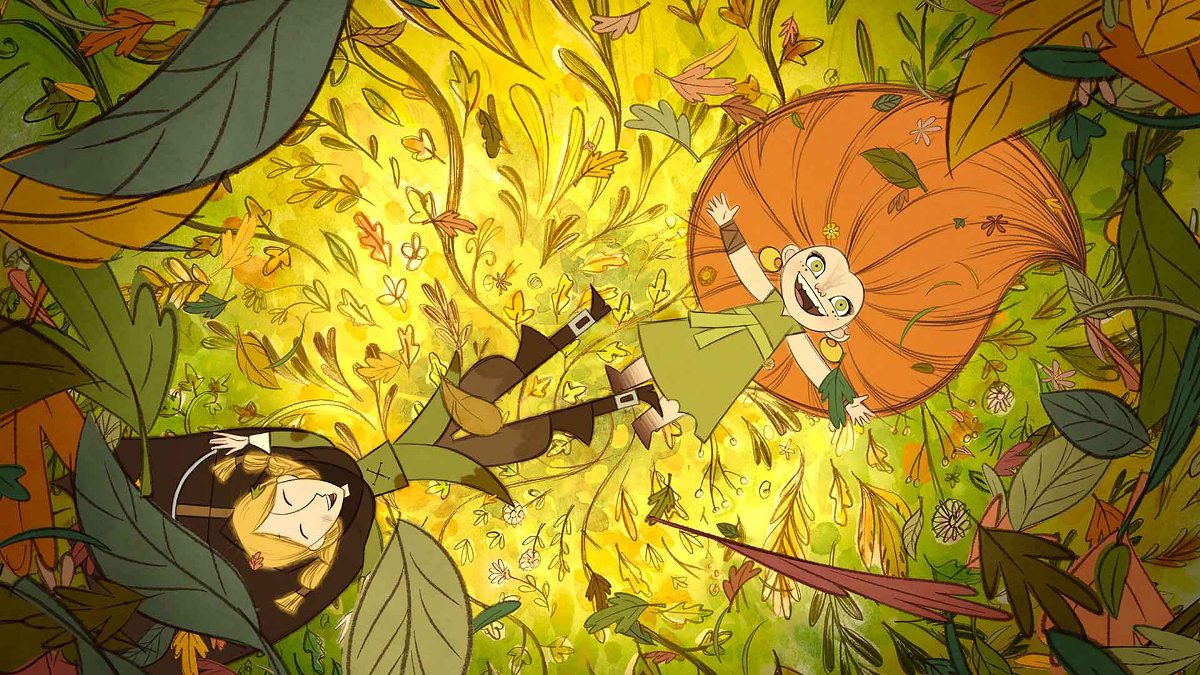 Robyn and Mebh, the two protagonists of Wolfwalkers, first meet like most unlikely allies do: as misinformed enemies. Robyn is a lonely girl, trapped in a town that hates her, whose solace and coping mechanisms rely on the love of her father and the desire to prove herself capable to him by killing some of the wolves that seemingly terrorize the town. Mebh, a “wolfwalker,” is wild, rambunctious, and free, and she doesn’t trust Robyn, but does save her from one of the various traps around the forest; deep down, Mebh is deeply earnest and trusting.

Robyn and Mebh bicker and fight at first but soon become fast friends, as is cliche in such storylines. But there’s more. The two clasps hands and gaze into each other’s eyes–deeply. The personal space between them is close and, at moments, more intimate than you might expect. The two roll about in the grass, laughing and playing. It’s reminiscent of a certain scene in Moonlight: of young children, at a singular point in living, as directly themselves… but together.

Transformation has long been a powerful allusion in queer narratives. The great documentary Disclosure spends some time discussing transformation narratives, of scenarios or situations where characters become something else, their “true” selves, and entertain a sense of freedom that they never before had, that they never before knew they desired. Disclosure features specifically trans people discussing trans narratives. But its sentiment can be applied to the queer subtext in Wolfwalkers, which posits itself as a straightforward transformation story, like The Princess and the Frog, or The Emperor’s New Groove. But Wolfwalkers hits deeper. Its tale of transformation possesses more than the theme of humility and ingenuity. It’s about an awakening. A revelation. It’s specifically a queer narrative for Robyn and Mebh’s evolving relationship, through which the lupine transformations is the means.

Robyn, for the most part, isn’t questioning herself. She’s pretty confident in her ability to hunt and fight wolves. Her father is, in his own way, accepting of her desire for a non-traditional role: a (male) combative protector as opposed to the (female) housewife. Their relationship is good, loving, and deep. But the Irish town they live in is much more restrictive and biased. Its people abide by its leader, the Lord Protector, and listen to his every word. It becomes clear that Robyn and her father are outsiders to this town, essentially English immigrants who are intensely distrusted and disliked. The father’s only job is to protect the town; Robyn’s is to stay out of the way. To stay hidden, under the radar. To stay, essentially, closested.

This becomes visual text after Robyn disrupts her father’s current attempt to catch the wolves. The Lord Protector appears—looming, fat, serious. He scolds and threatens Robyn’s father, and sends Robyn to the scullery, a drab, cold place of cleaning, scrubbing, washing, and dusting. Robyn is forced to dress halfway between a nun and a maid, strict-female symbols of repression and domesticity combined. The use of dry, oppressive colors in the scullery, as opposed to the bright, rich, freeing colors of the forest and Robyn and Mebh’s not-so-platonic tryst is telling. As mentioned above, theirs is a relationship of laughter and physicality and eye-contact, opening up the theme that this is, in many ways, a story about Robyn finding and coalescing a new side to herself that she previously never knew existed.

The actual transformation from human to wolf can be read in many ways. There is, perhaps, a much more thorough trans reading here that could be sussed out, to which a trans writer is much better equipped to explore. In a broader sense, the transformation, and the exploration of a free, open, wooded space as a wolf doubles as a space to explore a new found sense of queerness. The transformation itself is the result of a wolfwalker bite that isn’t healed in time. In that sense, the bite is a literal “taste” of new queer experiences and wonder that isn’t papered over or quickly ignored. The taste festers, and it hurts–in the sense that it’s deeply uncomfortable in its new-ness. But the wolfwalker heals it in a show of welcoming solidarity, and then Mebh acts as a queer guide for Robyn in her new lupine body. Robyn takes to it immediately, and loves it. Later in the movie, she tells her father and others that this is who she is.

It’s a long, torturous road to get to that point. That taste of queer freedom is now inside Robyn, and she can’t control it, she can’t repress it, she can’t hold it back. It awakens when she’s asleep, and her father sees it, but he cannot recognize her. So he attacks, leaving the wolf side of her rushing and running through the town, with the hostile, angry “townies” on her heels. The pleasurable freedoms of exploration in the forest are transformed into fear and danger as she scurries about the town; again, the dark, oppressive colors become reflections of the mood.

In this state, Robyn learns new truths about her world. She learns the Lord Protector has Mebh’s mother trapped in a cage, in her wolf form (imprisoned for outward queer appearance?). She discovers the extent of her town’s desire for hate (reflections of today?). She learns of the inevitable public execution of Mebh’s mother (the public, accepted killing of a queer figure?), and, perhaps most devastatingly, the absolute lack of options she has, forced to suppress this lupine side of her.

The most harrowing part of the movie is not the climax, filled with burning foliage, explosive gunfire, and vicious sword fights. It’s the scene of Robyn forcing herself to stay up all night, a montage of Robyn shivering in absolute fear, trying to stay awake. Every time she falls into a slumber, the wolf side bursts out, and she has to suppress it even more, and the movie takes the time to show the intense anguish of just staying conscious.

That fear of exposure, of outing herself and her truth, is the true thematic nature of the film. Robyn tries to explain her experience to her father, and he absolutely refuses to hear it. But it’s not of malice or hate of what wolfwalkers are, but of deep, repressed fear of what the town, and what specifically Lord Protector would do in retaliation. Robyn’s father pushes hard on her daughter to remain quiet and obedient, certainly because he is afraid for her, but the truth is that he is afraid for himself and his own ability to protect her.

It’s a lesson about a parent letting his child go and grow, but it’s also a lesson about allowing his daughter to embrace the freedom of her true self, to be a wolfwalker and stop being afraid of a society that’s hostile to her truth. It’s powerful stuff, made even more rewarding when Robyn’s father is also bitten and becomes a wolfwalker himself. His journey doesn’t have the full roller-coaster, exploratory nature that Robyn’s has, but he too gets a “taste” of just being free, of escaping the fears that have driven him all his life. Mebh’s mother, like Mebh herself, brings a temporarily ashamed, newly-transformed father into the pack: he, too, is welcomed.

This all contrasts with the Lord Protector, who edicts strict rules and proclamations of “taming” the forest and ridding the town of its wolves. The Lord Protector rules with an iron fist but has also convinced the town of the inherently vicious nature of wolves, in a bid for control and manipulation. Robyn and Mebh disrupt that control. The town hates them (in wolf form, the embodiment of their queerness), but their antics and actions during the near-execution of Mebh’s mother, weird but harmless, elicit laughter from the audience.

It’s a quick scene that nevertheless stands out. Prior to this moment, the Lord Protector plays tough, to make a show of the execution, but the embarrassment of the laughter forces him into a darker, angrier place (much has been written about how men react to being laughed at). The movie had kept his religious fervor in the background, as implied subtext, but afterward, it becomes direct, demanding to burn down the forest and kill all the wolves, specifically, in the name of the Lord. In his final moments, he nearly is bitten himself, but instead of allowing that bite to occur, to fester, he commends his spirit to God and kills himself. He would rather die than experience even a taste of what queerness has to offer.

Wolfwalkers ends with Robyn, Mebh, and their respective parents heading off to an unknown place, collectively and happily together. In the wagon, Robyn and Mebh are notably lying together in bed, they’re faces extremely close together. Personal space is all but gone; they are not close friends, or pseudo-step-sisters. They are lovers, fully in tune and comfortable with their queer sides, no longer trapped in the town that not-so-subtly is laid out and walled off like a prison. Wolfwalkers tells its story with the narrative beats all so familiar to audiences, solidly if repeatedly told through Disney, Dreamworks, or Sony animation, but this film plays its queer themes so hard that they’re practically text, and it makes a deeper, richer, more socially relevant, and honest film.

Wolfwalkers is currently available to watch on Apple TV.