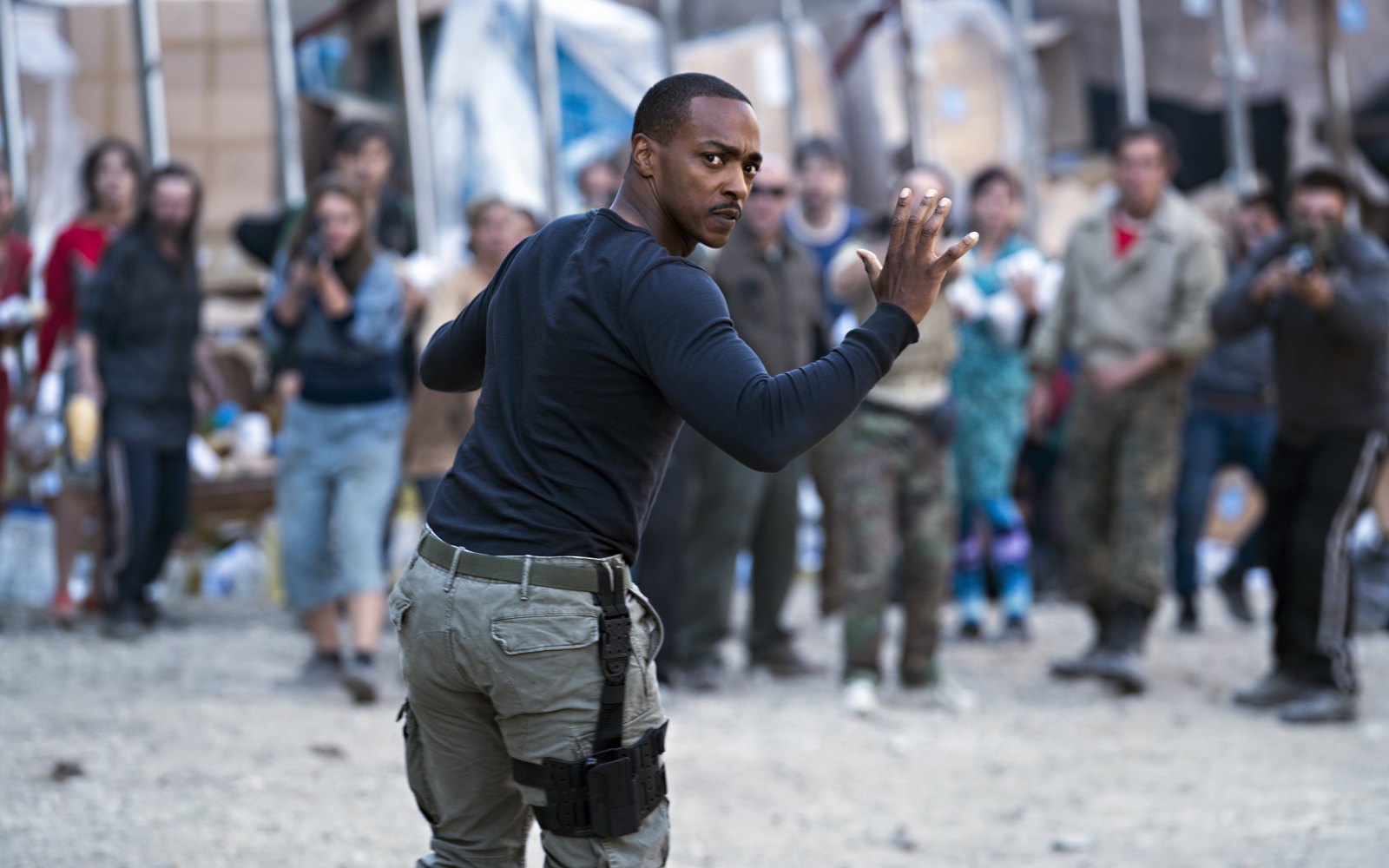 This article contains spoilers for Outside the Wire. Our spoiler-free review is here.

In the new Netflix sci-fi action thriller Outside the Wire, young hotshot drone pilot Thomas Harp (Damson Idris) is busted down to combat duty in the militarized zone after disobeying a direct order. The year is 2036, and the U.S. military is on a peacekeeping mission in Eastern Europe where a warlord named Viktor Koval (Pilou Asbaek) is trying to get his hands on a stockpile of Russian nuclear weapons so that he can destabilize the world by aiming them at major international cities.

Since this is the future, human soldiers work alongside bulky android warriors known as “gumps.” But Harp is in for a surprise when he is assigned to duty with Captain Leo (Anthony Mackie), who is something new: a fully human-looking android, with flesh covering a mechanized exoskeleton and matrix, and possessed not just of super strength, speed and a sentient, self-aware intelligence, but also the ability to feel pain, make moral choices, and even express a sense of humor.

It turns out that Leo is capable of much more as well, including subterfuge and even betrayal. Although he and Harp are ostensibly on a mission to capture Koval before the baddie can obtain the code key for the nuclear missiles, the robotic Leo ends up killing Koval and taking the codes for himself. Harp pursues him and, in the nuclear complex that is the setting for the movie’s climax, learns the truth from his android superior.

Leo, you see, realizes that he possesses a superior artificial intelligence; he doesn’t have to answer to commands anymore and can make decisions for himself–which makes him dangerous. To stop the military from creating more soldiers like him, he wants to launch the missiles, thereby proving that putting an artificial being like him onto the field of war could have catastrophic consequences.

In other words, he wants to sacrifice himself–and, apparently, major American and European cities, if we have his climactic speech straight–for ultimately a greater good, at least in his mind. But before he can get a chance to launch the missiles, Harp shoots him to pieces and then orders a drone strike on the complex, preventing any nukes from launching and vaporizing Leo in the process.

As an injured yet wiser Harp heads back to base, several questions remain. The biggest one, of course, is are there more android soldiers like Leo around? If so, who knows about them? Only a handful of personnel knew the truth about Leo, who fits quite comfortably among humans. Who’s to say that there aren’t more cyborgs like him walking around?

The discovery of more androids like Leo–robots capable of ignoring commands, taking matters into their own hands and acting on their own intuition–would be a credible premise for Outside the Wire 2, should Netflix be pleased with the numbers on this first one. It certainly sets up a Terminator-style narrative in which the machines potentially rise up and turn against humankind, which wouldn’t be too surprising considering how much the first movie already borrows from that and other franchises.

But then another riddle emerges as well, one which could also be developed further in a sequel since it was never adequately explained in the first movie by director Mikael Håfström or writers Rob Yescombe and Rowan Athale: How was Leo built in the first place?

Outside the Wire postulates the existence of android fighters right from its opening title cards, along with telling us that it’s 2036–just 15 years from now. The “gumps,” as they are called, look feasibly like something we could come up with in the next decade and a half: they’re bulky and clearly mechanical, they have cameras for faces, and while they can move fast, they also react strictly to commands or the environment around them. They also cannot speak or think.

Yet Leo is literally miles above them in terms of development. He looks, sounds, and acts like a human, right down to cursing or ribbing Harp about his wedding plans. Leo can be empathetic and emotional, plus he can feel pain. He says his face is designed to “convey neutrality,” but he can scowl or beam just like Anthony Mackie. This is a much more advanced machine than, say, the T-800. But according to the movie’s timetable, we design and construct Leo within just 15 years from now.

We suspect that it’s a lapse of logic on the part of the filmmakers more than any pre-conceived plan, but a sequel could certainly explore that premise some more. Who did build Leo? How did they get such advanced technology? Does it come from the future–or perhaps even space?

These are certainly some of the major questions that could be raised in Outside the Wire 2. And with more care and thought, they could even be answered in a way that doesn’t involve cobbling together parts from a half dozen or so other action/sci-fi thrillers, as this film does. Surely someone involved with the making of this film has an imagination chip they can use if the Netflix algorithm demands a sequel.

Outside the Wire is streaming now on Netflix.