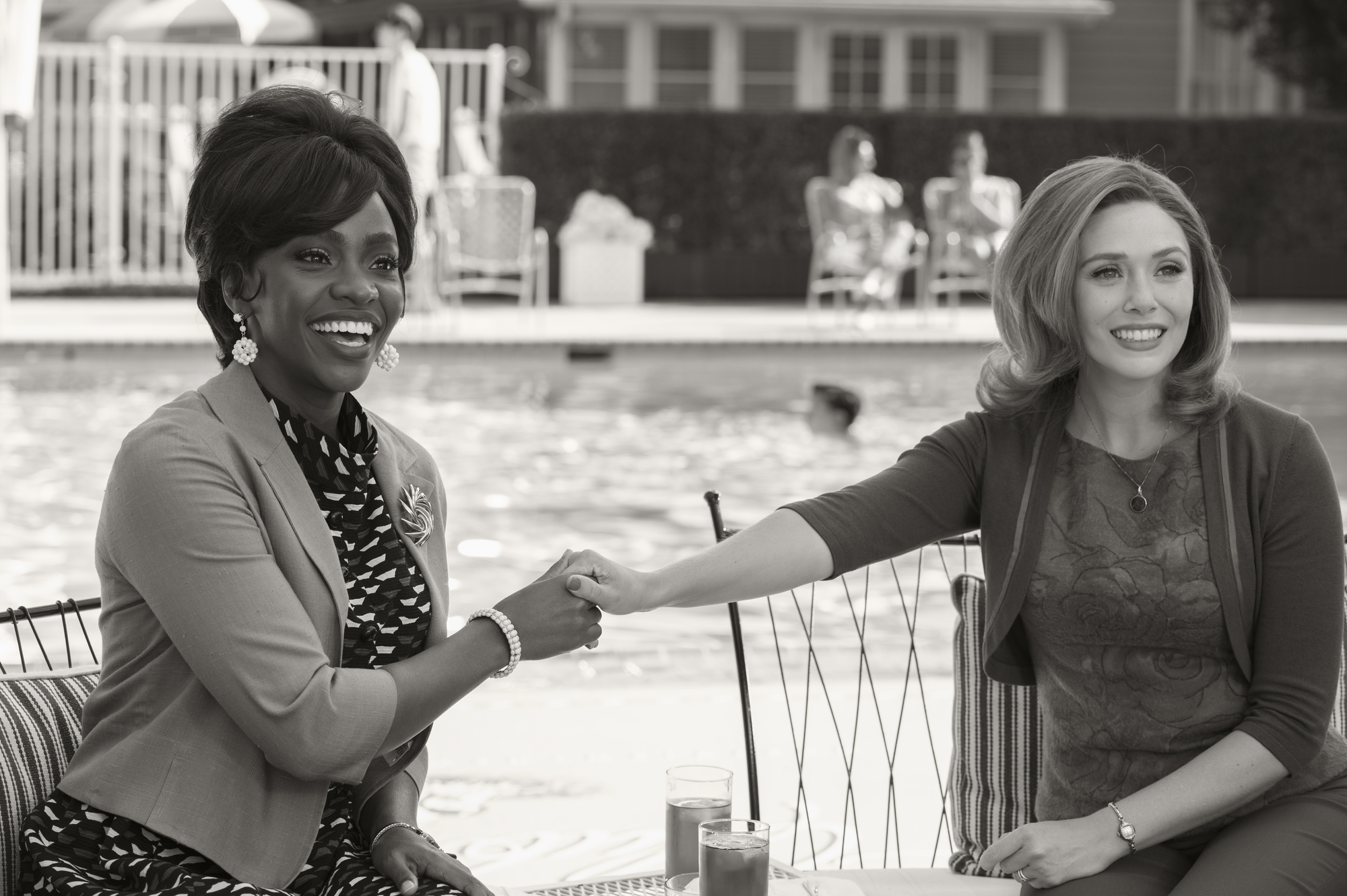 This article contains WANDAVISION Episode 1 spoilers, and potential spoilers for future episodes, the wider MCU, and Marvel Comics. We have a spoiler free review here.

NOTE: This is our reference guide for WandaVision episode 2! If you’re looking for episode 1, click here instead.

And you thought this show couldn’t get weirder? WandaVision episode 2 moved its sitcom-flavor a few years into the (still black and white) future, introduced a few new characters, and started leaning a little harder into the MCU than we saw in the first episode.

Let’s see what we found…

The idea of a regular suburban couple needing to do something goofy like put on an act for a talent show seems like classic sitcom fodder, but things get even more specific in this episode.

The sharp-eyed Ed Duffy spotted a carton of “Bova Milk” in the opening animated segment of the episode.

Bova is a cow evolved to walk and talk like a human, a gentle old soul who served as a midwife at the birth of Wanda and Pietro Maximoff. Well, at least in the comics. We’re not counting on seeing Bova’s lovely bovine countenance on this show any time soon, but hey, you never know!

Also visible in that animated intro is the Grim Reaper’s helmet, apparently underground at their house. The Grim Reaper is an extremely annoying Marvel villain who constantly popped up in stories dealing with Vision and Scarlet Witch. He was the brother of Simon “Wonder Woman” Williams, was a stupid racist, and was really angry all the damn time.

Watch everything Marvel and more on Disney+, right here!

The actual location of that helmet could be a subtle callback to the events of Tom King and Gabriel Hernandez Walta’s Vision series, which is an absolute masterpiece that you should read as soon as possible.

Wanda and Vision live in the fictional town of Westview, which despite looking very much like a Burbank backlot, is likely supposed to be in New Jersey. There’s two reasons we’re going to place Westview in New Jersey. First, Herb makes a reference to Hackensack, NJ later in the episode. But more importantly, in the comics, Wanda and Vision made the real life bedroom community of Leonia, NJ their home in the 1980s Vision and the Scarlet Witch comics.

Wanda and Vision’s stage magic act name has them going by the name of “Illusion” (Vision) and “Glamor” (Wanda). In the Vision and the Scarlet Witch comics, Illusion and Glamor were characters of their own, famed stage magicians Ilya and Glynis Zarkov, who were friendly neighbors of our favorite weirdo couple. What the public didn’t know was that their stage magic was actually REAL magic (kind of like what we see with Viz and Wanda later this episode). And what even fewer people knew was that they were also international criminals. Anyway, don’t expect Ilya and Glynis to show up on WandaVision or in the MCU now that their names have been used.

Also…is it us or does Wanda’s “Glamor” bathing suit thingy feel like a reference to some of her original, skimpier costumes?

That would be Teyonah Parris as “Geraldine,” who it has already been revealed is in fact the grown up version of Monica Rambeau, the young girl we met in Captain Marvel. While we’re on the subject, is it us, or does Geraldine’s brooch look a little like the logo she wore when she took on the mantle of Captain Marvel in the comics?

Wanda finds a toy helicopter, in full color, in her bushes. For one thing, the helicopter is in Iron Man colors (or Vision colors?). For another, it has the #57 on it. Vision made his first appearance in the comics in the pages of Avengers #57 in 1968. But perhaps most importantly, that helicopter bears the logo of SWORD (which we wrote more about here) on it.

So here’s the uncomfortable question: is this just Wanda’s subconscious playing tricks on her, or did she actually bring down a SWORD helicopter not knowing what she did?

The weird and disturbing beekeeper is an agent of SWORD based on the logo on his back. Or…is he?

The creepy, cult-y repetition of “for the children” certainly can’t be foreshadowing for Wanda’s own struggles with starting a family, can it? Of course not. Nothing to see here…

The watch comes from a company called “Strucker.”

The Strucker watch matches up with one of the themes of the rest of the episode. Baron Wolfgang von Strucker showed up as part of Wanda and Pietro’s origin in the MCU, but before that, he was a comic book foe of Captain America’s, a Nazi who had a mystical artifact that gave him powers: his Satan Claw. With all the devil mentions elsewhere in this episode, this is likely intentional.

“He’ll make time for you,” the slogan from the commercial, likely hints at another aspect of Wanda’s story here. In the comics, she was discovered to be a Nexus of Realities, an entity with a lot of explanation that amounts to “she’s important to the multiverse.” The person who discovered this about her (and nurtured it, and protected her because of it) was Immortus, the far future version of Kang the Conqueror.

The same two actors from the Stark Industries Toastmate 2000 commercial from episode one are back here. If they become a recurring theme, do they have greater significance?

Spot anything we missed? Let us know in the comments!