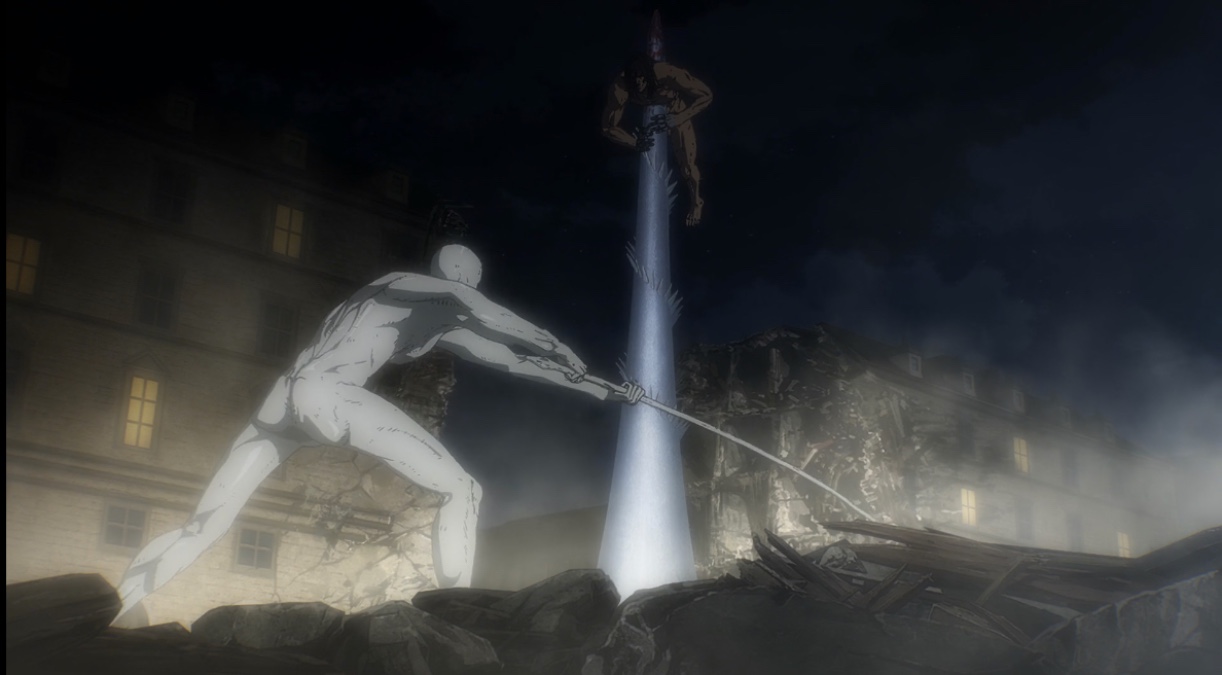 Attack on Titan straddles many genres, but its premiere episode embraces horror tropes more than anything else. That first episode is scary, not just when the Titans first appear, but with the manner in which they terrorize Shiganshina District and devour so much of their population.

It’s a destabilizing and overwhelming experience and the beginning of “The War Hammer Titan” doesn’t only remember the anime’s horror roots, but it delivers carnage that’s even more frightening than what’s seen in Attack on Titan’s first episode. And Eren is the one that’s responsible. The immediate destruction that plays out from Eren’s Titan transformation is horrifying to witness. The fear of the community becomes so palpable that citizens trample over each other and claim more lives in an effort to get as far away from Eren’s destruction as possible.

“The War Hammer Titan” intentionally lingers on terrified faces and the bodies of corpses that needlessly lose their lives as collateral damage. Attack on Titan wants the audience to recognize that there are people behind the lives lost in Eren’s decision. There’s a moment later on where a quiet opportunity for reflection turns into a chance to chastise Eren for his reckless disregard for innocent civilian lives, which includes the death of children. Eren is motivated and involved with what at least has been presented as a good cause (but at this point, who really knows), but his drive appears to have reached a point where the goal justifies massive casualties, which is an attitude that’s absolutely new for Eren. It reflects how he’s become more hardened and it’s honestly fascinating.

Eren kills dozens of people in this episode while he’s in his Titan form and as far as we know he kickstarts just as many revenge origin stories from the suffering survivors. Eren’s officially reached a point where he’s no different than the monsters that killed his mother and put him on this path in the first place. This symmetry has been present in Attack on Titan for a while now and is even explicit in this season’s marketing materials and poster, but that doesn’t weaken how powerful it is to picture a relative of Udo or Sophia stare up at Eren’s Attack Titan somewhere and scream that they’ll “destroy every last one of them!” as the cycle repeats itself. It’s already beginning to happen with Gabi.

After five episodes of setup, “The War Hammer Titan” is largely just the explosive payoff. Willy Tybur’s sister transforms into the amazing War Hammer Titan, which gives Eren some serious competition. There’s been a general style to all of the significant Titans so far and the War Hammer Titan is the first one that feels like a deviation and more like some kind of antagonist from a Silver Surfer comic. As the Titan’s name suggests, it wields an incredibly powerful hammer that’s made out of a strength that’s at least as durable as the Titans. What’s more impressive is that this new Titan can will massive spikes to burst out of the Earth as a secondary form of attack.

It’s stunning to watch this play out, especially after Eren’s Titan gets impaled by one of these spikes and then get his head clean knocked off courtesy of the War Hammer Titan’s weapon. It’s a fast battle, but still one of the most thrilling showdowns from the series. This Titan duel could easily fill the episode, but it’s instead just the first act to an even larger fight that reaches greater heights. Anyone who has ever truly loved this show should have an extremely difficult time to not cheer out loud when Eren signals Mikasa to attack with Thunder Spears and the rest of the Survey Corps. That’s right. Mikasa and the freaking Survey Corps are back.

Out of the many sublime moments that fill “The War Hammer Titan,” the return of Mikasa and other familiar faces is easily the most satisfying. Attack on Titan’s restraint over featuring its primary characters makes their surprise assault here carry even more of an impact. The audience is kept in the dark that all of this has been going according to Eren’s plan and it effectively creates the same terror and tension that’s felt within the Marleyan citizens, even if Eren actually has all of this under control.

It’s surprisingly cathartic to hear the zip of 3D maneuver gear as the Survey Corps begin to soar through the air and provide backup for Mikasa and Eren. Mikasa gets an introduction that’s worthy of how bad-ass she’s become over the years, but it’s also gratifying to see Jean, Connie, and Levi seamlessly pull off a mission like they’re some anime Ocean’s 11. However, it’s the moments where the Survey Corps come face-to-face with Gabi and Titan’s new breed of characters which hit the hardest. This season’s structure is already beginning to pay off whenever the worlds of Eldia and Marley crossover and collide.

The abnormalities that surround the War Hammer Titan are the biggest obstacles for Eren and the Survey Corps. Their precise strategy doesn’t work as intended since the Titan’s human doesn’t appear to occupy the nape of the neck, but is instead underground near the feet. Another fascinating revelation around this Titan is that the user is linked via a fleshy umbilical cord that’s straight out of eXistenZ or Videodrome. There’s no time to appropriately deal with this new information, but it’s easily one of the coolest/grossest Titan developments in some time.

The combat in “The War Hammer Titan” is highly suspenseful, but it transforms into an epic free-for-all between multiple Titans where everyone tries to eat each other in order to take over the dominant abilities. It’s an act that would look completely bizarre at the start of Attack on Titan, but it’s crazy how this strange Titan ouroboros is now completely logical. No one gets to consume their Titan targets in this episode, but as even more Titans enter the fray there are suddenly even higher stakes present.

On an aesthetic level, there were initially some reservations over MAPPA taking over animation duties from WIT Studio for Attack on Titan’s final season. Any differences so far have been largely negligible, but it’s also been a reasonably calm and contemplative season up until this point. “The War Hammer Titan” is nearly entirely action as scenes of combat, chaos, and destruction play out. It’s the first time where the audience gets a better idea of MAPPA’s ability to handle Titans’ more intensive moments and this is fortunately an episode that looks fantastic.

Mikasa’s surprise attack is a little CGI-heavy at moments, but it doesn’t dwarf the action. The battle between the Attack and War Hammer Titans, the Survey Corps’ siege on Marley, and the constant panic that’s present in the citizens all come to life in a satisfying manner. The animation is able to match the gravitas of these moments and there’s a grandiose score that amplifies these pivotal scenes even more.

Attack on Titan is now in that amazing, glorious sweet spot that’s only rarely achieved by a high-quality piece of programming after it enters its endgame. Suddenly every new episode immediately becomes the series’ best installment. Last week’s “Declaration of War” defied expectations in every regard and set a new high mark for Attack on Titan, but it looks like the next handful of entries are all going to operate at this level after considering the events in “The War Hammer Titan.”

There are literally close to a dozen individual moments here where if just one of them were to occur in an episode it would become an all-time classic, but instead “The War Hammer Titan” practically trips over its repeated moments of immense awesomeness. This episode doesn’t just maintain the momentum that “Declaration of War’ established when it threw down the gauntlet, but it increases the tempo in a manner that’s almost exhausting. “The War Hammer Titan” is the type of Attack on Titan episode where you need to repeatedly remind yourself to breathe because you’ll be holding your breath in anticipation from the moment the installment begins until when the credits roll.

“The War Hammer Titan” is a masterpiece that brings the band back together, which leads to some extremely enjoyable and long overdue teamwork from old and familiar faces. The note that “The War Hammer Titan” concludes on is the biggest thing that’s ever been attempted in the series and it somehow makes the final moments of “Declaration of War” seem tame in comparison.

Eren and company have fought in plenty of battles and faced undesirable odds, but there’s a newfound urgency to this battle. Both sides know that their time is nearly up and after episodes of Attack on Titan throwing more gasoline into this fire, it’s now finally ready to enjoy the flames. This season has put in the work to humanize both sides of this war in a way where every casualty will be felt and any winners are set to have their hands stained in blood.