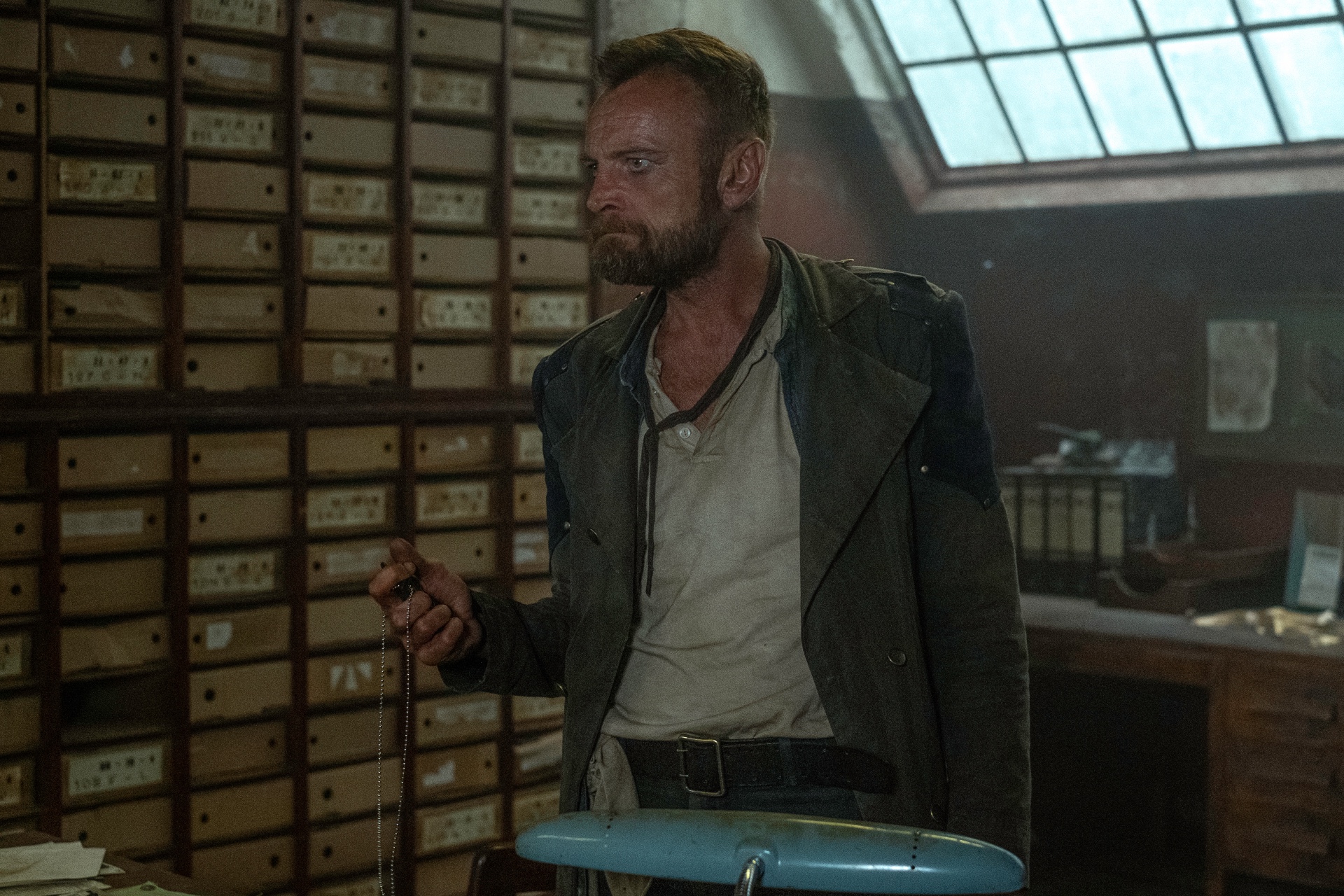 “Twilight Canyons” embraces The Watch’s theme of being “inspired by,” but not adapting, Pratchett’s Discworld novels through its blink-or-you’ll-miss-it references to several of the books less closely related to the adventures of Vimes and company. In that, it progresses its own plot much further, and only delves into the over-the-top silliness of the previous episode briefly, making it feel as though this series may come into its own in the next few episodes.

At the end of the last episode, Carcer, his union-forming goblin entourage, and female wizard companion Wonce, had realized that the key to controlling the dragon was a sword in the hands of a former member of the Assassins’ Guild. Vimes and company, having not yet connected the dots, are a step behind. Lady Sybil, used to vigilante work, has gone on her own to track down Wonce and managed to snag some of the woman’s hair, but not much else. Knowing Angua’s keen sense of smell could lead them to Wonce, Sybil joins up again with the Watch, who follow the lead. Unfortunately for them, Wonce has laid a trap, and several “drag goblins” (which seems to be a reference to the makeup worn on top of the underfunded prosthetics donned by the actors) nearly do them in. They’re only rescued by a smaller goblin to whom Cheery was kind earlier in the episode.

Meanwhile, Carcer and Wonce have traveled to Twilight Canyons—a place of grave danger and rage, according to Wonce’s contact. But when they enter, Carcer and Wonce are surprised to find that it’s a retirement home, full of elderly people with various states of memory loss. They find Jocasta Wiggs, the former-assassin who stole the dragon-controlling sword from the Assassins’ Guild. Now aged, her memory faded, she can tell them nothing—but they discover a mural the woman once painted on her wall, telling the story of how she and another woman stole the sword and traveled the world with it, finally reaching the very edge.

“What magic is so powerful that it can drive two women to the edge of the world?” Wonce asks. She and Carcer interpret from the mural that Jocasta was betrayed and the other woman took the sword for herself. When Jocasta says a single word—Perpetua—the villains realize that it’s the name of the woman, who was buried above Jocasta’s empty tomb in the cemetery for traitorous assassins. They retrieve the blade and head to the area where children are “thrown away” to a life on the streets, intending to summon the dragon—but nothing happens. The sword’s hilt has been swapped out.

The Watch are out of leads, until retired Sergeant Swires (no relation to the novel watchman of the same name), sends them a lead from Twilight Canyons, where he now lives. Through Carrot’s continued use of real detective work (mainly looking at actual files for information), he realizes that Perpetua is the one who put Jocasta in Twilight Canyons, leaving her with a cane. When the Watch interprets the mural, they see it differently: they see two women traveling the world, seeing all its wonders, even as they run from the assassins pursuing them. The missing hilt, they realize, is the handle of Jocasta’s cane, which she entrusted to Swires once she stopped walking. Sure that Carcer and Wonce will realize their mistake, Vimes makes a plan to trap the two, battling over the sword. When Swires begins to raise an objection, Vimes interrupts, standing his ground, insisting that the others follow HIS plan for once instead of going off on their own.

But of course, things don’t go as planned. When Vimes and Carcer begin to battle (at the same time that Wonce and Sybil face off), the magical security system traps the two pairs of combatants, locking them in a dance number (to the disconcerting accompaniment of Wham’s “Wake Me up Before You Go-Go”) the ends with Carcer being teleported elsewhere and Wonce losing the sword to Sybil and retreating. With the sword and hilt now in the possession of the Watch, Vimes has Jocasta place her hands on the hilt as they put it back together, only for the sword—Wayne, stage name Gawain—to inform them that it doesn’t remember how to control the dragon. It does, however, reveal that only lovers can hear its voice (to the resounding protests of all the Watch members who aren’t Cheery, who seems to view herself as a lover).

The Watch brings Jocasta to Unseen University in an attempt to restore her memory of the sword’s abilities. Meanwhile, Carcer is in the interdimensional space of the auditors, a group of seemingly omniscient and extremely powerful beings who support order and science—and none of that dream or hope nonsense—who view Carcer’s dimension’s Watch, who are beginning to believe in themselves, as a cosmic threat. They send him back, saying it’s his last chance—and he and Wonce enlist the disgraced head of the Thieves’ Guild to steal the sword.

The episode features a number of nuggets for Pratchett fans. Early on, Vimes, irritated that Sybil has taken matters into her own hands instead of letting him do his job, gives her a rousing rendition of the “Captain Sam Vimes Boots Theory on Socioeconomic Unfairness,” including this gem:

VIMES: Eyes closed, I know just where I am in this city just by the feel of the stone beneath my toes.

This direct reference to the novels is one of the few in this episode, though there are smaller nods throughout. Cheery admits that when all the Watch lost their eyebrows, it wasn’t the “little blue men” at fault (a reference to the Nac Mac Feegle introduced in the “Tiffany Aching” books). The villainous (though not imaginative enough to be evil) Auditors of Reality play a role in several Discworld novels. The loudspeaker in Twilight Canyons mentions the name of resident Cohen the Barbarian, Discworld’s greatest warrior hero. And the name “Twilight Canyons” is a reference to an unfinished Pratchett project, in which the aging community of a retirement home, many in states of memory loss (a subject close to Pratchett’s heart; Pratchett had early onset Alzheimers and was vocal in raising community awareness).

The episode also nicely refers to “The Wat,” featuring Vimes playing guitar to Good Boy, Sybil’s small dragon, during the episode’s opening. Should the musical skill of the members of the Watch continue to be relevant in future episodes, some of my previous complaints about “The Wat” may diminish.

While “Twilight Canyons” does a lot to move forward the season plot, with Vimes in possession of an artifact, a reveal about other artifacts that Vetinari wants under her control, and with the big reveal about the powers behind Carcer’s reappearance, the episode also has a strong internal theme about love. Opening with Carrot trying to ask Angua if she’d be interested in doing something social (and abjectly failing), the episode moves to Vimes almost recalling to Cheery his vision from “The Wat,” in which he was married to and happy with Sybil. Gawain—Wayne—the talking sword can only be heard by lovers.

The secret behind unlocking Jocasta’s memories is in helping her remember the love she shared with Perpeuta. And Cheery, revealed as fully a romantic, encourages Carrot’s feelings for Angua, referencing her own lost love as a reason not to delay. (Jo Eaton-Kent’s Cheery is really the star of this episode all together; their fantastic comedic delivery throughout reduces the overburdened earnestness of the previous episode and allows some of the humor to come from the characters themselves, not rely on the world’s delve into sheer absurdity.) Even Death is revealed to be someone lonely who’d love a friend to have drinks with—much to Carrot’s surprise when the offer is made.

While the silliness of the dance number in “Twilight Canyons” works less well than it was clearly intended, the interplay between the characters and the forward momentum of the story raises this one above its predecessor. The makeup work remains atrocious (possibly even worse than in previous episodes), and despite references to Koom Valley reenactors, we’ve still seen none of Pratchett’s numerous dwarf-sized dwarves in Ankh-Morpork. (The Librarian curiously looks slightly more like an orangutan in this episode.) Though the characters remain departures from their book forms, the clear reference to other versions of the Watch by the very strange and ominous auditors pulling Carcer’s strings seems to be a justification for this very different version of Discworld.

If it can find its stride in the next couple of episodes, the series will be worth bingeing once it’s complete. But the key word here is still “if.”