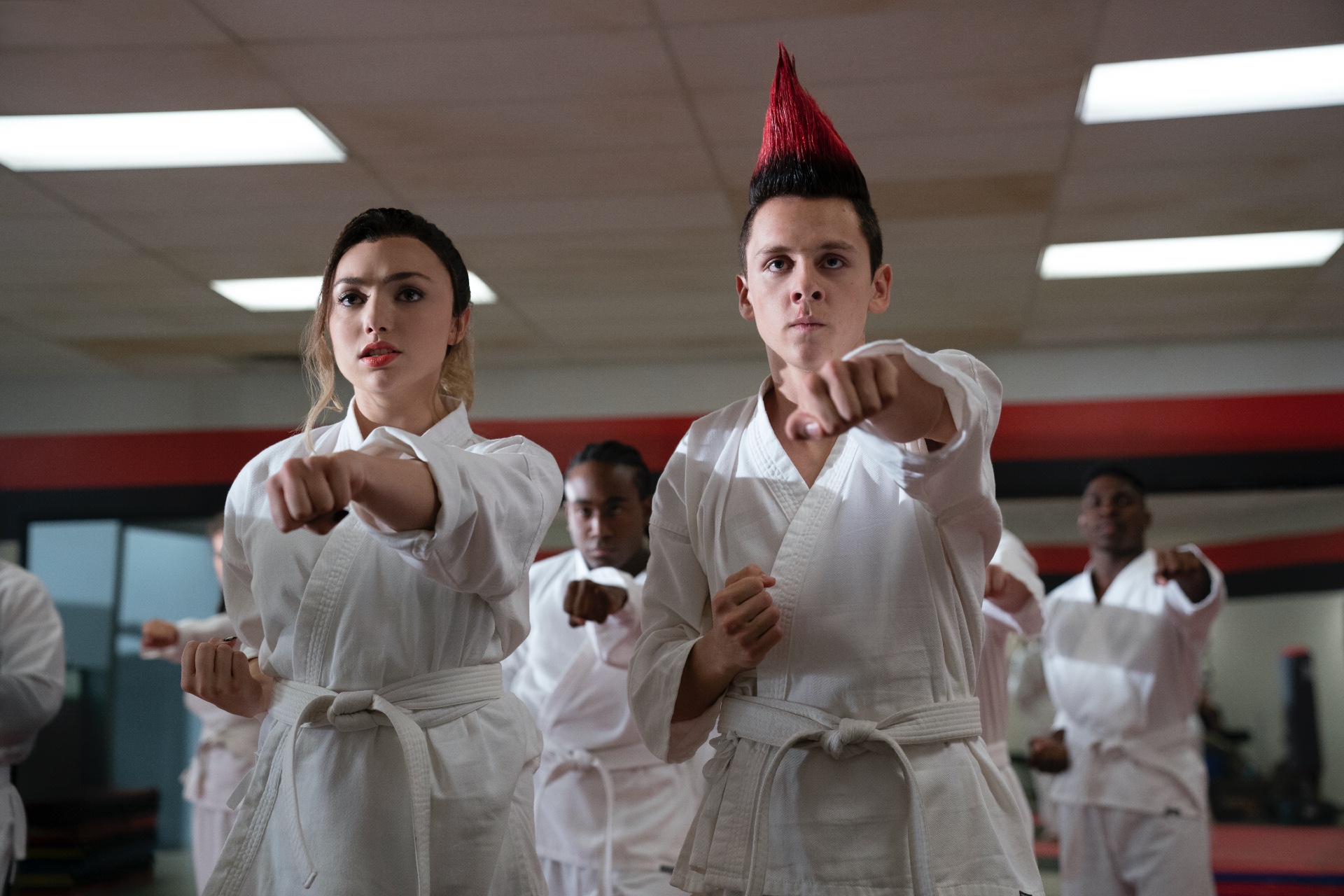 Why aren’t there more Asians in Cobra Kai?

Since Cobra Kai first premiered on YouTube, The Los Angeles Times, Vanity Fair, and other publications have called out the series for its lack of Asianness. The series also scored poorly on UCLA’s 2020 Hollywood Diversity Report. Miguel (Xolo Maridueña) and Carmen (Vanessa Rubio) are the only non-white main characters. This was exacerbated when the recently-released season 3 excluded Aisha (Nichole Brown), a major character of color who was a fan favorite.

Granted, Cobra Kai does have a few non-white actors in reccurring roles. They just aren’t leads. Nate Oh plays Nathaniel, but he is a minor character with minimal development. Kyler (Joe Seo) was the first bully to appear in Cobra Kai constantly harassing Miguel. To their credit, the writers made him a wrestler instead of a stereotypical martial artist, just because he’s Asian. Cobra Kai has revealed character backstories for nearly all the show’s bullies, including Kreese (Martin Kove), but not Kyler. He remains a secondary character, but has potential to emerge as a major villain next season.

Season 3 also enjoyed some added Asian representation during Daniel’s trip to Okinawa with heartfelt cameos from Tamlyn Tomita (Kumiko) and Yuji Okumoto (Chozen) from The Karate Kid Part II. While both characters figure largely in the canon, their Cobra Kai appearance was too limited to be as Asian inclusions to the main cast. Perhaps they’ll return in season 4. Maybe Johnny (William Zabka) needs to learn Chozen’s pressure point technique too. (I would love to see Johnny in Okinawa.)

This is all to say that Cobra Kai is not as diverse or Asian-centric as one might expect a property about martial arts to be. But that just makes it the latest in a long line of Karate Kid properties that has had to grapple with the reality of how karate operates in a globalized world.

In some ways, The Karate Kid was groundbreaking for Asian representation when it premiered in 1984. Daniel’s (Ralph Macchio) crane kick inevitably degraded into a mocking anti-Asian gesture. The pose is iconic, but mostly as ridicule. Even Will Smith took a poke at it when Morita made a guest appearance on The Fresh Prince of Bel-Air. And yet, Mr. Miyagi’s (Pat Morita) remarkable backstory in the film brought attention to the plight of Japanese Americans like never before.

In Miyagi’s poignant drunken scene, we discover that he was a veteran of the 100th/442nd Infantry Battalion (a.k.a. the ‘Purple Heart’ Battalion) and his wife died during childbirth in a WWII internment camp. The scene was almost cut because the filmmakers felt the tangent interrupted the momentum of the action. In retrospect, it was likely that this very scene sealed Morita’s Oscar nomination. Manned completely by Japanese Americans, the 100th/442nd was the most decorated unit for its size and service in U.S. history.

Japan was the enemy, so the Battalion was constantly confronted by racism from surrounding ranks. The Army didn’t quite know what to do with them. They were sent on suicide missions in Europe, but they prevailed and kept coming back for more. They were awarded 18,143 individual decorations including 52 Distinguished Crosses and 21 Congressional Medals of Honor. The Medal of Honor is America’s highest award for combat valor. Miyagi has one. Recognizing the Purple Heart Battalion gave The Karate Kid a lot of soul, but Miyagi’s medal was historically awkward. The real story exposes deeper racial discrimination.

The Next Karate Kid begins with Miyagi attending a 442nd commendation. In a respectful cameo, appearing as the Senator at that event was Daniel Inouye, an actual veteran of the 442nd who lost his arm in combat. He was the first Japanese American to serve in the House and Senate, and was a recipient of the Medal of Honor. However, The Next Karate Kid came out in 1994, six years before he received it. Twenty of the Medals of Honor that 100th/442nd vets received were upgrades awarded in 2000 after Congress rectified the oversight. The only one prior to that was given to Pfc. Sadao Munemori posthumously. He gave his life jumping on a grenade to save his comrades. When Daniel met Miyagi, no living Asian vets had a Medal of Honor.

On a personal note, my grandfather was Captain Taro Suzuki of the 100th Battalion. Like so many of his comrades, he was wounded in action. His right hand was permanently crippled, and he still had so much shrapnel in his body that he couldn’t pass through a metal detector. I inherited his Purple Heart which I cherish like the LaRussos treasure Miyagi’s medal. I heard his war stories growing up. The Karate Kid was the first time I saw his battalion represented in a movie. Miyagi’s drunken scene is still intensely moving and personal for me.

Morita died in 2005 so Miyagi only appears in Cobra Kai flashbacks culled from the original movies. Although the series goes to great lengths to honor him, the lack of any Asian leads does give credence to those accusations of cultural appropriation and whitewashing. The thing is, much of the martial arts scene in the Western world has already been, for lack of a better term, whitewashed. And one character’s journey (and the real life figure he’s based on), helps illustrate martial arts’ approach to worldwide growth.

In Cobra Kai season 3, Young Kreese’s journey mirrors the real-life experience of the action choreographer of the original films, Master Pat E. Johnson. Kreese learned martial arts from his Caucasian commander, Captain Turner (Terry Serpico), who learned it while serving in Korea from Master Kim Sun-Yung. It was actually Korean Tang Soo Do, not Karate. Johnson learned Tang Soo Do from Master Kang Lo Hee while stationed as a U.S. Army chaplain in Korea. This is how Tang Soo Do spread westward. Many of the leading American martial arts proponents are not Asian.

Today, martial arts belong to the world. For generations, Asian traditional martial arts have striven to propagate themselves globally. Judo and Taekwondo have become Olympic events and Karate was going to be added in the 2020 Tokyo Olympics. It’s still on track when the games are rescheduled this summer. International organizations are found in every major martial arts style now and they are continuing to spread. So, it’s not entirely fair to begrudge the diaspora’s non-inclusivity.

While The Karate Kid brought martial arts to the San Fernando Valley, other films and shows have spread the martial diaspora globally. The Blaxploitation genre glorified martial arts with its own unique take on the culture. Netflix’s Seis Manos is a Kung Fu based adult animated series set in Mexico. Although it does have a leading Asian role in Chiu (Vic Chao), is this cultural appropriation? Indian movie stars like Tiger Shroff and Akshay Kumar have brought martial arts to Bollywood in force with films like Commando, Baaghi, and Khiladi. That’s not Asian cultural appropriation, even though India is a different region of Asia where we don’t typically associate martial arts.

Nevertheless, the international spread of Asian martial arts does not give filmmakers carte blanche to deny whitewashing and cultural appropriation. We must not go back to the days of Remo Williams: The Adventure Begins where Joel Grey played Chuin with slant eye makeup.

Whether Cobra Kai culturally appropriates Asian culture or not, it can certainly increase its diversity. The setting, West Valley High School, is attended by students from Encino and Reseda. While Encino is over 80% white, Reseda is over 50% Hispanic and over 11% Asian. Statistically, the inclusion of Miguel and Carmen isn’t enough. The Karate Kid franchise was pivotal for representation. Conversations about appropriation and whitewashing aside, Cobra Kai can at least honor the franchise’s tradition and increase its diversity next season.

Cobra Kai season 3 is available to stream on Netflix now.