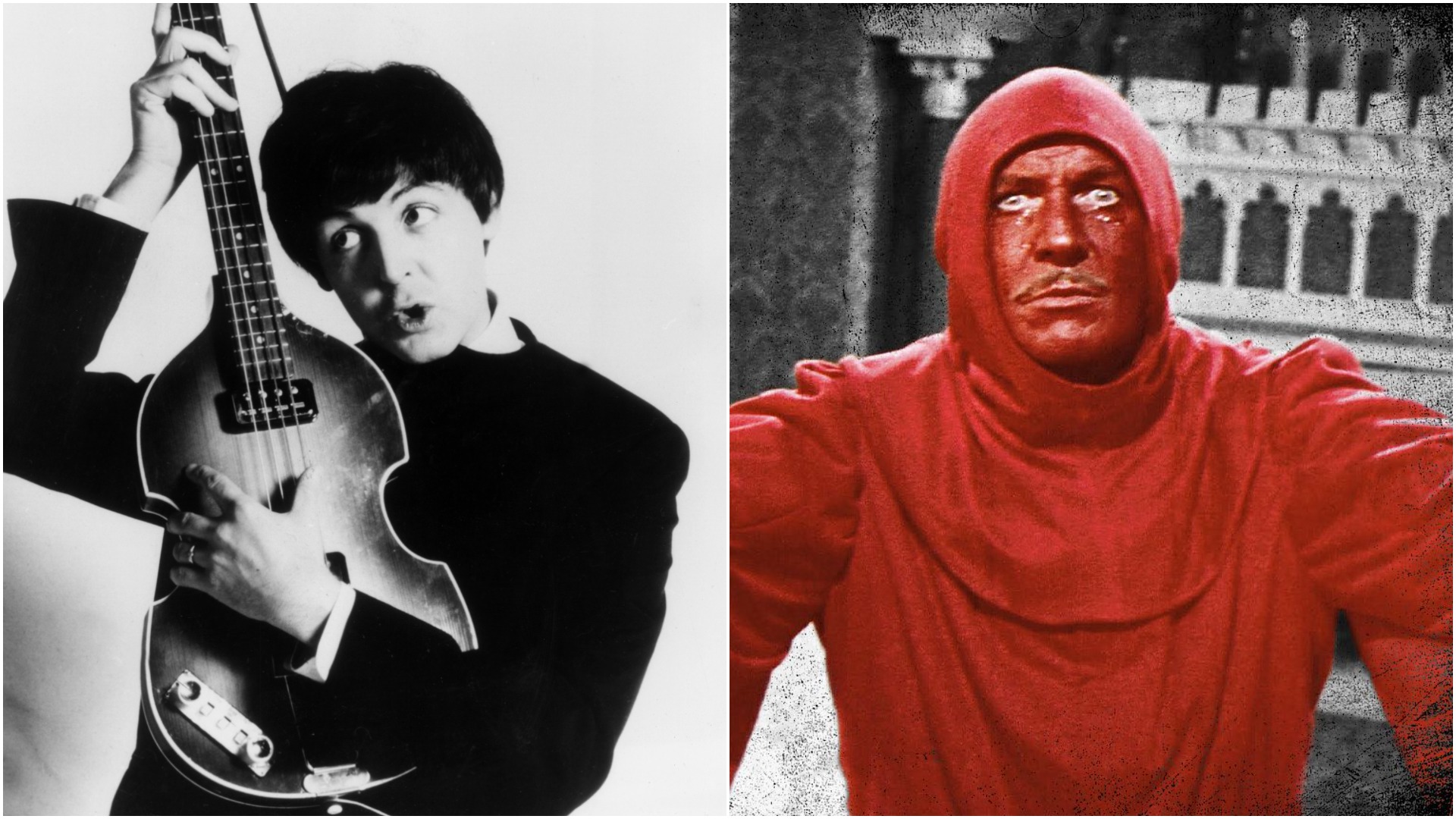 Jane Asher is as well-known for acting as she is for dating an ex-Beatle, and in 1964 she brought Swinging London to the canteen of Roger Corman’s The Masque of the Red Death.

Based on the gothic short story “The Mask of the Red Death: A Fantasy,” the film remains the most ambitious installment in Corman’s Edgar Allen Poe cycle of movies, contrasting the bleak landscape of a dying village with the psychological torment of six rooms of color, and one with no color at all, just a deep black with a blood red crimson glow cast on it. Vincent Price stars as the sadistic and satanic Prince Prospero, whose darkness reigns over his dominions.

Price wouldn’t be this malignant again until 1968’s Witchfinder General, which was retitled The Conqueror Worm, even though it had nothing to do with the Poe story. In Masque, he throws decadent orgies to distract himself from the catastrophes which rage out of his control around him. The Masque of the Red Death came out in 1964, but shot in London during the titillating Profumo Scandal of 1963, and the pampered and entitled characters Hazel Court (Hammer’s Curse of Frankenstein) and Patrick Magee (Dementia 13, A Clockwork Orange) played could have stood in for unholy political unions. The 19-year-old Asher, as virginal peasant girl Francesca, personified the bright lights of the other side of town.

Asher was an iconic face of Swinging London and the emerging youth culture of the early 1960s. Probably best recognized as the little girl who makes friends with the astronaut in The Quatermass Xperiment (1955), she was a child actress who first appeared on screen in the 1952 film Mandy. Before Jefferson Airplane warned about chasing “The White Rabbit,” Asher played the title role in Argo Records’ productions of Alice in Wonderland and Through the Looking-Glass in 1958. While her parts in films like The Greengage Summer, and the 1962 Disney production of The Prince and the Pauper increased her visibility, it was a spot on the BBC’s Juke Box Jury which forever tagged her name with the pop revolution which was swinging through London in the wake of the racket coming from the seaport of Liverpool.

Asher was 17 in 1963 when the British magazine Radio Times assigned her to cover a Beatles concert at the Royal Albert Hall. “Now these I could scream for,” she declared in the story when it came out. Asher’s onscreen persona and public profile personified hope and helpful activism which may have seemed naïve to the Prosperos of the older generation but lurked outside their castle walls. Asher’s flame-red hair promised as much of a danger to the old guard as the Red Death. And he brought that optimism to the set of Masque.

“Jane Asher was wonderful to work with,” Roger Corman tells Den of Geek while talking about the restoration of The Masque of Red Death. “She was a very young girl. She had worked on the stage. I think she was in the Young Shakespeare Group. And I don’t know if it was her first picture or not, but she was very good. She was an excellent actress and very good and easy to work with.”

Asher’s Francesca is so accommodating, she tells Prospero’s mistress Juliana, “I will do what I must to save my men. But if they die, I will die — and so will Prince Prospero.” Asher’s performance is fragile and courageous, giving the character sensuality and dignity. As part of “the Resistance,” she is a worthy opponent for Price’s dark prince. Although she is uneducated, she can counter his Satanic philosophies and self-serving moral relativism. She is also the stand-in for the audience to relate to as she ventures through the colored rooms with her eyes wide open, occasionally in shock.

Offscreen, Asher was just as fresh and friendly as her character. The actress was also dating a very famous musician, who happened to write a big hit for the band her brother, Peter Asher, was in. Den of Geek asked whether Asher introduced Corman to any of the other players in Swinging London.

“A little bit,” Corman says. “Jane and I used to have lunch together in the studio commissary. And on a Thursday, she said a friend of hers was traveling through, on his way to London the next day. Would it be all right if he came and watched a shooting during the morning, and we could all have lunch together? And I said, ‘Sure, fine.’

“So, I got a director’s chair, sitting next to mine, during the shooting. And it was a nice, young guy, and we talked during the shooting. And I explained to him a little bit between shots, how it all worked. And then we all, Jane, and he and I, had lunch together. And it all went very well. And at the end of the lunch, I said, ‘Jane tells me you’re going to London. What are you going to be doing in London?’ He said, ‘Well, I’m with a singing group from Liverpool, and we’re going to be making our debut tomorrow night in London.’”

Yes, it was Paul McCartney.

By that point, Corman had already made the jukebox movie Rock All Night, which featured the music of The Platters, and would go on to produce the 1979 punk movie classic Rock ‘n’ Roll High School. That film starred The Ramones, who got their name from Paul McCartney when he tried out the stage name Paul Ramon. But Corman had no clue who he was talking to back then, and the Mersey musician kept up his part in the masquerade of red sauce.

“He was very cool,” Corman says. “He knew that as an American, I didn’t know who The Beatles were, or what he was. And as he left, I said, ‘Well, good luck, Paul, on your debut in London tomorrow night.’ And I remember he was very cool. He understood, and he didn’t want to say, ‘Listen, buddy, we’re the number one group.’ He just said, ‘Well, we’re a singing group.’”

Whatever show it was Paul’s singing group was in town for, the band apparently passed the audition. “Then I saw the paper Sunday morning headlines, ‘Beatles conquer London,’” Corman remembers.

While McCartney never came back to the set again. It wasn’t the last informal encounter the two legends had. “We were at an Academy Award party, which was I think the Vanity Fair party, and I saw across the room Paul McCartney,” Corman recalls. “And I said, ‘Oh, there’s Paul over there.’ And my wife, Julie, said, ‘Let’s go over and talk to him.’ And I said,’”No. I had lunch with him 60 years or so ago. He isn’t going to remember some guy he had lunch with 60 years ago, and I don’t want to intrude’ because he was in a conversation.

“And Julie said, ‘Well, I want to meet Paul McCartney.’ So, she went over and talked to him, and he came over to see me. As he approached, he said, ‘Masque of the Red Death.’ He knew exactly where we’d met.”

Shortly after the filming of The Masque of the Red Death, McCartney moved into the attic of Asher’s parents’ 18th-century London townhouse. McCartney and John Lennon wrote many of their signature songs in a music room in the basement, including “I Want to Hold Your Hand.”

Asher inspired McCartney to write classic love songs like “All My Loving,” “And I Love Her,” and “Here There and Everywhere.” Their relationship also drove him to pen the equally classic “We Can Work It Out,” “You Won’t See Me,” and “I’m Looking Through You,” which McCartney says, in the biography Many Years From Now by Barry Miles, “I seem to remember after an argument with Jane.”

Jane’s mother, Margaret Asher, taught McCartney to play the recorder, which was used on the song “The Fool on the Hill.” That song was written about Maharishi Mahesh Yogi, and Asher was part of the Beatles’ entourage on the band’s meditation retreat to India.