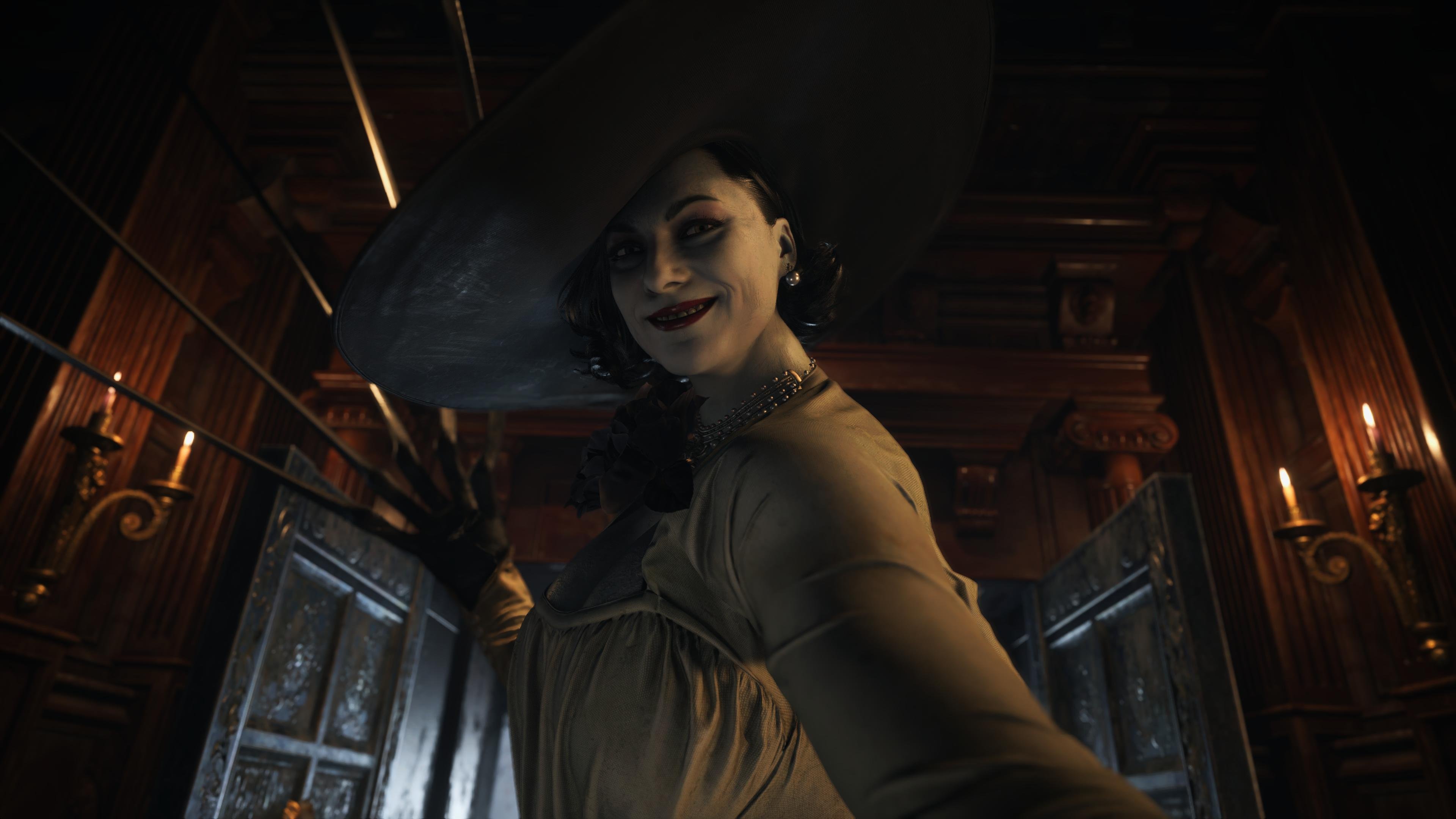 While the recently released Resident Evil Village demo (“Maiden”) can easily be completed in around 10 minutes, it still offers an intriguing look at one of 2021’s most anticipated games as well as the processing power of the PS5.

More importantly, the demo is loaded with references, Easter eggs, and clues that enhance its short length by expanding the upcoming game’s world as well as our knowledge of what the mysterious Resident Evil Village is really all about.

So whether you haven’t had the chance to play the PS5 demo (likely due to scalpers buying all the next-gen consoles) or you’re just looking to dive a little deeper into what it all means, join us as we take a look at some of the things you may have missed during Village‘s “Maiden” voyage.

Something…Big Locked in a Cage

While you’re wandering through the basement at the start of the Resident Evil demo, you’ll likely hear a frightening noise that sounds like it’s coming from something rather…large. I actually scrambled to get out of the basement as soon as I heard this noise as I assumed I was being followed.

However, a closer look reveals that’s not what’s happening. One of the cells in the basement has been boarded up, and it seems to house whatever the source of the noise is. You can’t quite make out what’s in the cell by peeking through the hole in the panels, by my first thought is that this may be one of the “werewolves” we’ve seen in previous trailers.

Early in the demo, you find a letter from an unknown individual that seems to have been summoned to work in the house. We’ll dive into the contents of this letter in a bit, but one of the most interesting elements of the letter is the year that it was written: 1958.

This letter seemingly implies that some very weird things were happening in this house as early as 1958. While it doesn’t outright state that anything “supernatural” was occurring at that time (even if it hints that the manor’s residents fear the outside), that date raises serious questions regarding how what we’re seeing in Resident Evil Village fits into the larger Resident Evil timeline.

If you look at the record player in the room just above the dungeon, you’ll find a record player loaded with an album called “Danse Macabre.” It’s one of those classic compositions that you’d absolutely recognize as soon as you hear it.

While that song was likely chosen because it’s spooky, it’s potentially worth noting that the song itself is meant to convey the narrative of Death using its fiddle to make the dead dance. Could that be taken to mean that resurrection factors into Village‘s plot?

One of the easiest items to miss in the Resident Evil demo is a bone necklace located on a table in one of the first rooms you enter after escaping the basement. If you examine the necklace, you’ll find that it belongs to the demo’s protagonist and was intended to ward off evil.

That superstition is pretty common, but the necklace does tend to again suggest that this demo takes place long before the more modern events of Resident Evil Village. It would also strongly suggest that the demo character could be a villager as those beliefs have historically been more common among lower societal classes.

The Statue Behind the Locked Door

There are a few locked doors in the Resident Evil demo that you’ll likely be able to explore sometime during the full game. Look through the window located near one of those locked doors, though, and you’ll catch a glimpse of a statue seemingly presented like a shrine. It’s hard to tell exactly what the statue is, but it appears to be a female form surrounded by people kneeling near her.

Could this be the “Mother Miranda” character referenced in the latest trailer? Even if that’s not the case, the design and placement of the statue strongly suggest that the figure is being worshipped somehow.

Look at the table next to the fireplace, and you’ll find a list of names separated into “Candidates” and “Rejects.” At a glance, this seems to just be a list of people that the mansion’s residents have kidnapped.

However, that idea doesn’t seem to hold up the more you think about it. If this is just a list of victims, how could some be candidates and rejects? Is it possible that this is a list of people who could somehow be converted into whatever the manor’s residents are?

Ever since the first Resident Evil Village trailer debuted, people have been referring to the castle residents seen in the Resident Evil demo as “vampires.” They certainly check most of the vampire boxes.

However, there are a couple of elements of the demo that cast doubt on the idea that the story is really that simple. The extent of the creatures’ powers certainly seems to go beyond vampires as we know them, and the torn remains of the bodies in the dungeon (and spread across dinner plates) would almost suggest that they’re after more than just blood.

In the room you unlock at the top of the stairs, you’ll find a note praising the Dimitrescu family wine and the flavor of a particular vintage called Sanguis Virginis (“maiden’s blood”). The note says that the family’s winemaking techniques date back to the 15th century and involve a “technique used to enrich the wine’s flavor intensity and bestow it with a thick bouquet.”

The implication that human blood is being used to enrich the wine amusingly reminds me of the chili from Texas Chainsaw Massacre 2 (“There’s no secret. It’s the meat.”), but the more interesting implication here is the idea that this family has been blending blood into wine for quite some time now. That again raises questions about how long whatever is happening in this home and village has really been happening.

Is Dimitrescu a Tyrant?

While there were early rumblings that Lady Dimitrescu is actually a tyrant given her internet thirst friendly size and the appearance of an umbrella logo in one of Village‘s early trailers, that idea initially felt closer to a fan theory.

However, the end of the Resident Evil demo which sees Dimitrescu shoot Freddy Krueger-like claws from her hands puts that theory into a new light. Not only do those claws look similar to the ones we’ve seen in Resident Evil tyrant designs of the past, but as we previously discussed, there are elements of these characters that strongly suggest that they’re much more than vampires.

“So We Finally Meet”

When you encounter Lady Dimitrescu near the end of the Resident Evil demo, she knocks you back with the door that you’re trying to escape through and says “So we finally meet.”

It’s a specific way to greet someone. The implication is that Lady Dimitrescu knew you were in the home but you two just haven’t seen each other yet. That would also seem to imply that you’ve been here a little while and that she has somehow been away.

Put it all together, and there’s a strong chance that you were one of the servants hired to work in this home that was referenced in the letter you found near the start of the demo. For that matter, it’s entirely possible you’re the one who wrote the letter.