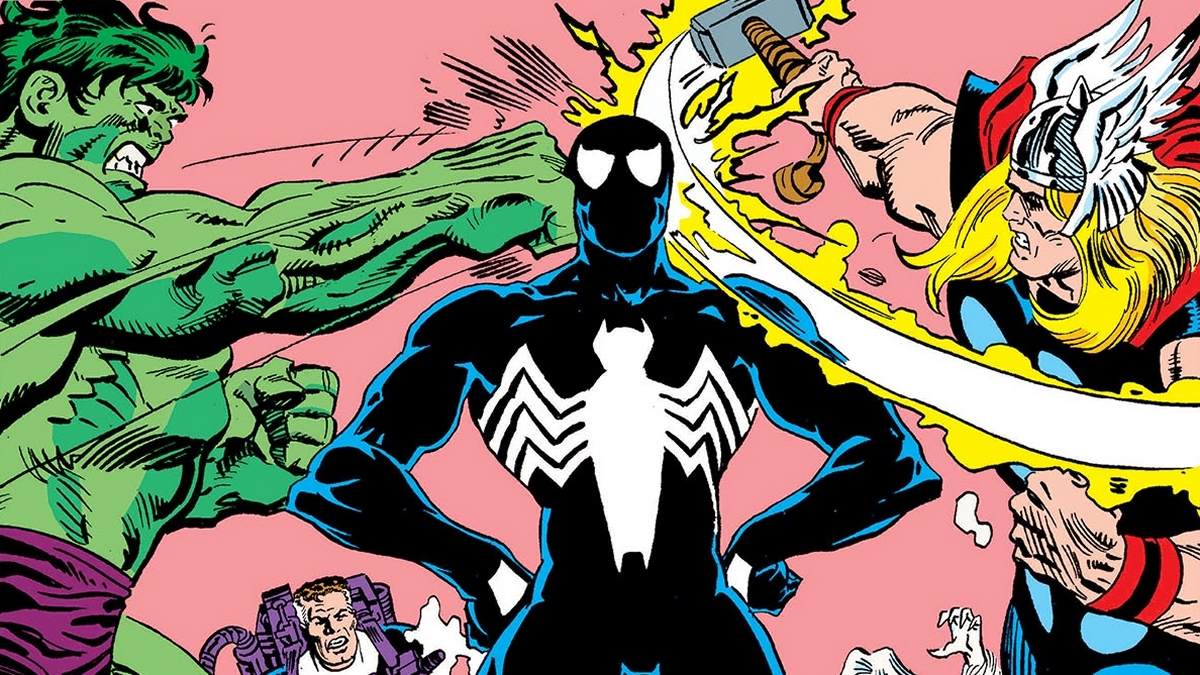 If being Venom was like being in the Beatles, then Peter Parker would be Pete Best. His stretch of time in the late-80s wearing his living, black costume is a staple of his history. Before it turned Eddie Brock into a box office giant, the symbiote made for a badass variant look for Spider-Man that still holds up to this day. It’s the ultimate story of how we can lose ourselves to power, even if a loved one beat you over the head with lessons about responsibility.

Over the years, Spider-Man did rejoin with the symbiote a few times, usually in the name of heroism. In Venomized, a Venom symbiote from another reality bonded to him for a little while. At the end of Dan Slott’s lengthy Amazing Spider-Man run, Eddie Brock let Spidey borrow the symbiote so he could fight the Red Goblin (Norman Osborn as Carnage). These days, Parker and his former tights at least have an understanding.

Yes, we see Peter Parker intentionally bond with what would have been known as the Venom symbiote and keep on keeping on with the crime-fighting. What happens when such a pure-hearted hero goes all-in on wearing clothes that constantly tell him to bite people’s faces off? Guess we’ll find out soon enough.

Then again, Peter holding onto the symbiote is an idea that’s been visited time and time again. Not only has it popped up in issues of What If?, but also in other forms of Marvel media.

WHAT IF THE ALIEN COSTUME HAD POSSESSED SPIDER-MAN?

In the fourth issue of What If?’s second volume, Danny Fingeroth and Mark Bagley jumped onto the then-recent introduction of Venom by doing an issue about what would have happened had Peter Parker taken too long to figure out what the deal was with his black costume. He couldn’t get in touch with the Fantastic Four, so he instead met up with Dr. Connors, which was a fruitless venture. By the time Reed Richards was able to investigate, the symbiote was already bonded to Spider-Man and wouldn’t be removed so easily.

Puppeting Parker’s body, the symbiote escaped captivity and hid in the city for several days. Spider-Man eventually came across a rampaging Hulk, which convinced the symbiote to leave Spider-Man for this upgrade of a host. Abandoned, Peter Parker appeared as an old man due to how much the creature sucked him dry. Using his final hours to design a sonic gun that could destroy the symbiote, Peter’s body finally gave out.

The symbiote eventually left Hulk for Thor. Interestingly enough, Banner was left cured of being the Hulk while the symbiote claimed what happened to Parker was a mistake. Whether it was telling the truth or not, it still took over Thor’s body and tried to hide out in Mount Rushmore. Luckily, Reed Richards had Black Bolt’s epic voice on speed dial and that took care of that.

Well, except for Black Cat getting the kill shot thanks to that aforementioned sonic gun.

The final issue of the second volume of What If? took a look back at the original Secret Wars event and wondered what would happen had the heroes and villains been stuck on Battleworld for a generation. This Jay Faerber/Gregg Schigiel collaboration had Galactus and the Beyonder kill each other, meaning that all the survivors were stranded. Much had happened in those 25 years, but for the most part, the heroes and villains put their differences aside. Sure, there was something in there about Dr. Doom shacking up with the Enchantress, only for her to leave him for Thor and Doom killing her because of it, but otherwise you had the Wrecking Crew chilling out with Hawkeye and She-Hulk like old friends.

The stars of the one-shot were the offsprings, like the daughter of Captain America and Rogue or the son of Human Torch and Wasp. Spider-Man only had a couple moments, but they were incredibly interesting. He seemed colder to everyone and there was a curious debate over whether anyone had seen him eat anything.

During the climactic battle, Klaw blasted Spider-Man with some sonics. The symbiote pulled away to reveal nothing underneath but Peter Parker’s skeleton. This turned out to be far from a surprise to the heroes as Human Torch saved him and moved on without a second thought.

Straying away from the Venom symbiote, there was a time in the comics where Ben Reilly – back when he took over being Spider-Man – was the host to the Carnage symbiote for a few hours. Nothing really happened with it, but he looked rad as hell and it made for a cool cover image.

The 90s Spider-Man cartoon ended the series by doing its own prototype version of Into the Spider-Verse. The final two-parter took place in “I Really, Really Hate Clones” and “Farewell, Spider-Man.”

In an alternate reality, a version of the Clone Saga storyline happened, only in this one, Peter was more of an asshole to Ben Reilly instead of treating him like a brother. When Peter found out that he was possibly the clone, he got extra pissed about it right around the time when the Carnage symbiote was nearby. He became Spider-Carnage and created a plan to destroy the multiverse.

A team of Spider-Men from different realities came together to stop him. After visiting a world where Spider-Man wore armor and was successful and happy in every way, the cartoon’s main Spider-Man realized that Uncle Ben was probably alive in that universe. That Uncle Ben confronted Spider-Carnage and got through to him. Although the man within wasn’t strong enough to expel the symbiote, he was able to sabotage his own multiverse-destroying plans via sacrificing his own life, all the while begging for forgiveness for all the horrors he committed.

WHAT IF? THE OTHER

Peter David and Khoi Pham did a one-shot where the Venom symbiote returned to Peter at the absolute worst time. The Other was as storyline where Spider-Man seemingly died, but survived in a cocooned form. After getting in touch with his inner spider, he was reborn with more primal abilities that unfortunately didn’t last too long. This alternate version had Spider-Man refuse the rebirth. Everyone already mourned him and he didn’t want to have that happen all over again. He remained in his cocoon, choosing to let nature take its course over time.

At that time, Mac Gargan was Venom’s host and the symbiote could sense Spider-Man’s situation. Knowing Peter was ripe for the picking, the symbiote left Gargan and consumed the husk of Peter Parker. With the symbiote in full control, he was neither Spider-Man nor Venom. He was Poison.

Poison confronted Mary Jane and Aunt May, but realized they wanted nothing to do with him. Poison instead left and spawned a new symbiote child in order to bond with and reanimate the corpse of Gwen Stacy.

Yeah, lot of laughs going on in that story. Sheesh.

WHAT IF? AGE OF APOCALYPSE

Age of Apocalypse was already a bizarre alternate universe. Rick Remender and Dave Wilkins made it even more batshit insane by having Legion accidentally kill both Xavier and Magneto. In this reality, Nate Summers joined with a superhero resistance team to take out Apocalypse and there’s all sorts of crazy stuff going on.

At one point, the team came across a nest of Peter Parker clones engulfed in a giant black web of symbiote. A horrified Captain America (wielding Mjolnir) had them destroy all the brainless Spider-Man clones before moving on to the next big challenge.

Back in 2008, Activision decided to go all in on the whole symbiote thing by making a Spider-Man video game based entirely around a symbiote invasion and symbiote-possessed versions of different heroes and villains. A fight with Venom led to Spider-Man getting some of the goop onto himself, allowing him the option to become Symbiote Spider-Man. Venom’s symbiote started expanding and latching onto hundreds of other New Yorkers, overwhelming the city with chaos.

After teaming up with and/or fighting lots of Marvel characters, Spider-Man took on a kaiju version of Venom and convinced Eddie Brock to fights its influence. Depending on factors, Venom would either die from heroic sacrifice or Spider-Man’s hands.

There are various endings based both on how much time you’ve used the symbiote and how much of an overall dick you’ve been. Too much of the black costume could at best cause Mary Jane to break up with you. At worst, it could cause you to conquer New York as leader of the symbiotes.

Since Marvel did the Spider-Verse comic event, Cullen Bunn and Iban Coello did a natural knockoff of sorts called Venomverse. While it had no real connection to the Spider-Man story, the gist was similar: various Venom hosts from the multiverse had to team up to face a threat that was hunting them down.

The mainstream Venom was the only Eddie Brock host involved as the rest of the crew included the likes of Mary Jane, Captain America, Dr. Strange, Rocket Raccoon, Deadpool, Gwenpool, and so on. There was also a Spider-Man in there and while they didn’t go too far into his background, he was the only one who seemed to recognize Eddie and harbored unexplained resentment.

The threat came in the form of Poisons. These tiny, white creatures on their own didn’t seem to be much of a threat, but when one would make physical contact with a symbiote and its host, it would engulf them and completely take over. The Poison, the symbiote, and the host would turn into some kind of white, armored creature permanently.

Spider-Man was one of those to fall victim to the Poisons. This led to a rather cathartic fight to the death between Venom and Poison Spider-Man that Venom won.

Now, you might be saying, “Didn’t you JUST talk about a story where Spider-Man was a symbiote monster called Poison already? Isn’t this confusing?” Yes. Yes it is. So confusing that when they released a Marvel Legends figure for Poison Spider-Man from Venomverse, the profile information on the back of the box described the story from What If? The Other instead. Whoops!