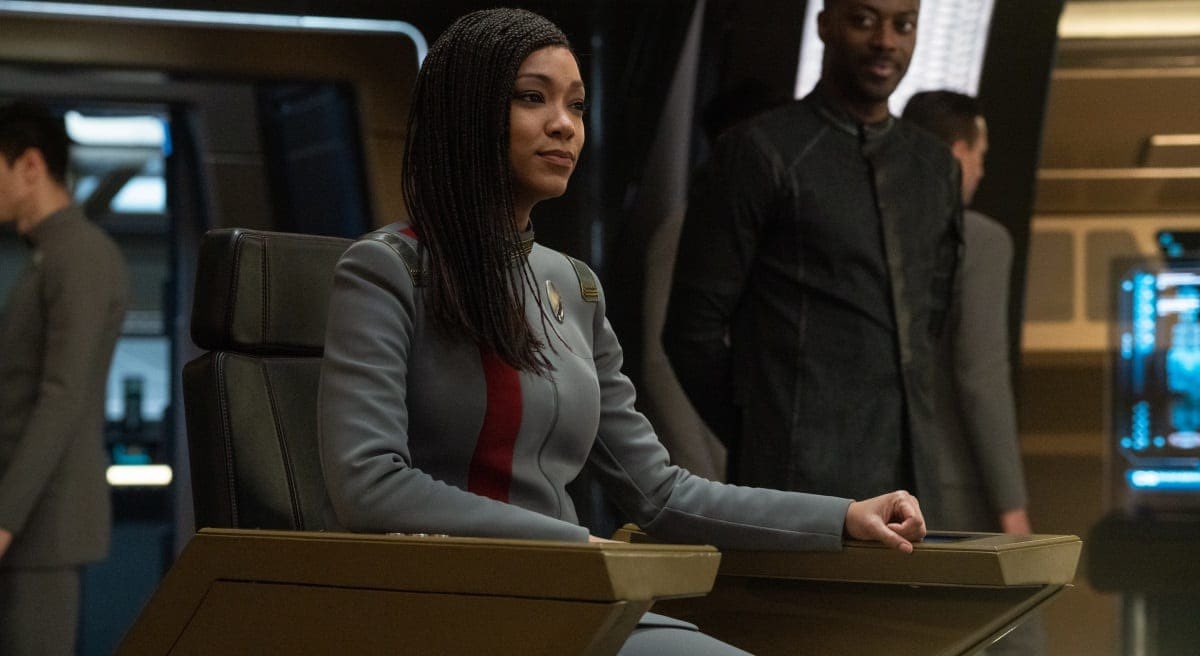 Star Trek: Discovery Season 3 was surprising in many ways. The latest season literally went where no installment of the Star Trek franchise had gone before, flying into an unknown time period that exists so far outside established canon that the series was basically free to do whatever it wanted. And, for the most part, it did.

Break up the Federation as we once understood it? Check. Show us a broken Starfleet that was essentially in hiding, hanging on to a dream of past glory? Also, check. Confirm the eventual reunification of the Vulcans and Romulans? Spock’s dream was achieved, folks. In Discovery Season 3, there are new planets, new relationships, and new rules—all set in a new future that often feels as alien to us as viewers as it does to the characters that have been catapulted there.

Yet, Season 3 somehow still ended with a moment that felt completely expected: Michael Burnham’s promotion to the Discovery captain’s chair.

To be clear, this is not a bad thing. As captain of the Discovery, Burnham makes history – she is, officially, the first Black woman lead to captain in a live-action Star Trek series. (Shout out to Carol Freeman, captain of the U.S.S. Cerritos on the animated Star Trek: Lower Decks.) That’s exactly the sort of representation we need more of as we flesh out what Gene Roddenberry’s hopeful vision for a better humanity looks like. (And work toward a time when there won’t be any more character firsts that need to be recognized because our media will have caught up to that ideal.)

Star Trek is made better by featuring diverse characters and telling stories about the wide variety of people (and alien species, where applicable) who look to the stars with wonder and boldly go forward. Our pop culture as a whole is made more interesting and vibrant by featuring a wider variety of characters in healthy positions of power and exploring the choices and tensions in those lives. These are good things and fans are right to want to both see and support them.

But despite those truths, after the events of Season 3, it’s no longer clear if becoming a captain is the right move for Michael as a character, or for the larger narrative of Discovery itself going forward. And it’s difficult to solely celebrate such a landmark moment when it doesn’t entirely fit with the story we have seen play out on screen so far, no matter how much we might want it to.

Burnham’s promotion does have a certain air of inevitability about it. Discovery hasn’t exactly been subtle about her career trajectory, and most viewers have likely been expecting this since the show’s first season, as Star Trek series leads have, traditionally, been in the captain’s chair. And, for the most part, Michael has earned her shot by virtue of being a compassionate leader who has stepped up when her crew has needed her and saved their lives multiple times over.

Sure, she has something of a colorful professional history – complete with mutiny, insubordination, varying degrees of recklessness, and a general disregard for rules she finds inconvenient or simply doesn’t want to follow. But it’s not like that’s something new in this universe and we’ve certainly seen (usually white) male Starfleet officers repeatedly rewarded for brash creativity and the same refusal to play things safe that she displays.

The problem is that much of Season 3 appeared to be telling a very different kind of story, one that interrogated not just what kind of leader Michael wanted to be but also acknowledged the tension between the identity she left behind in 2259 and the person she’s becoming in the 32nd century. The fact that she spent a year carving out a life in an unknown future on her own has obviously changed her, so much so that a significant subplot this season involved her valid questioning of whether she wanted to be a part of Starfleet at all.

This undercurrent added some intriguing tension to many of the season’s early episodes, as Michael discovers that, on some level, she enjoys living without the institutional guardrails and daily regulations of life as an officer on a starship. Maybe her dream was never to run around the galaxy with Book and his giant cat queen, but it’s clear that Burnham enjoys the freedom of the choice to go where she wants, to act on her own, to not have to answer to regulation.

Though she clearly missed her Discovery family, Michael seems remarkably free and unburdened in her life with Book, in a way she’s never really been allowed to be on the show before. And that’s part of the reason her brief stint as Saru’s Number One is so uncomfortable to watch. For a year, Burnham has been living a life of independence, one in which she has unilateral control over what she does and how she handles problems. Of course, she’s going to have a difficult time transitioning back to a world that was never that fond of her penchant for risk-taking in the first place.

And for a brief moment, it felt as though Season 3 was honestly asking if a life in Starfleet was something Michael even wants anymore, if it is the best way for her to make positive change. Over the course of the season, we watched Michael spend more time trying to figure out ways to flout the system than being a true partner to her captain. Saru has to reprimand her repeatedly, she eventually gets demoted, and even Admiral Vance seems to have serious misgivings about her leadership abilities—all while Michael is making decisions that save lives and that, aside from some interpersonal consequences, she doesn’t regret.

Unfortunately, Discovery seemed so determined to end Season 3 by putting Michael in the captain’s seat that it forgot to truly show us how she got there. How did she make her peace with all the conflicting feelings she had about her place in Starfleet and its role in the 32nd century? Did she talk to Book about what it might mean for their relationship if she’s suddenly commanding a starship?

And, moreover, what changed the minds of other characters like Saru and Vance, who seem to harbor grave misgivings, not about Michael’s ability – she’s clearly proven how capable she is many times over – but about whether such a position is the best fit for her skills. And to be honest, it’s disappointing that Discovery skipped over all that. This is a new future, and none of the old rules have to apply any more. There are different ways to serve, to lead, to help others, and even to hold power than through a position of command. The series posed some difficult, fascinating questions, and then completely dropped the ball on exploring or answering them in any thorough way.

Of course, there’s every chance that Michael Burnham will turn out to be a remarkable captain. She’s saved her crew, her friends, and all sentient life in the universe once already, and she’s nothing if not dedicated. Who knows? Perhaps placing her in an official leadership position will allow other members of the bridge crew to more fully step forward into their own stories as the Discovery explores this new universe. After all, Burnham can’t solve problems in her new role by constantly going rogue anymore. And maybe that will be a good thing, in the end.

For all its ensemble feel, Discovery has always been primarily focused on Michael’s story. The biggest question of Season 4 will be whether the show can square this circle, and find a way to give fans this deserved step forward, but to do so in a way that makes sense for who this character is becoming, not who she was when the show started.