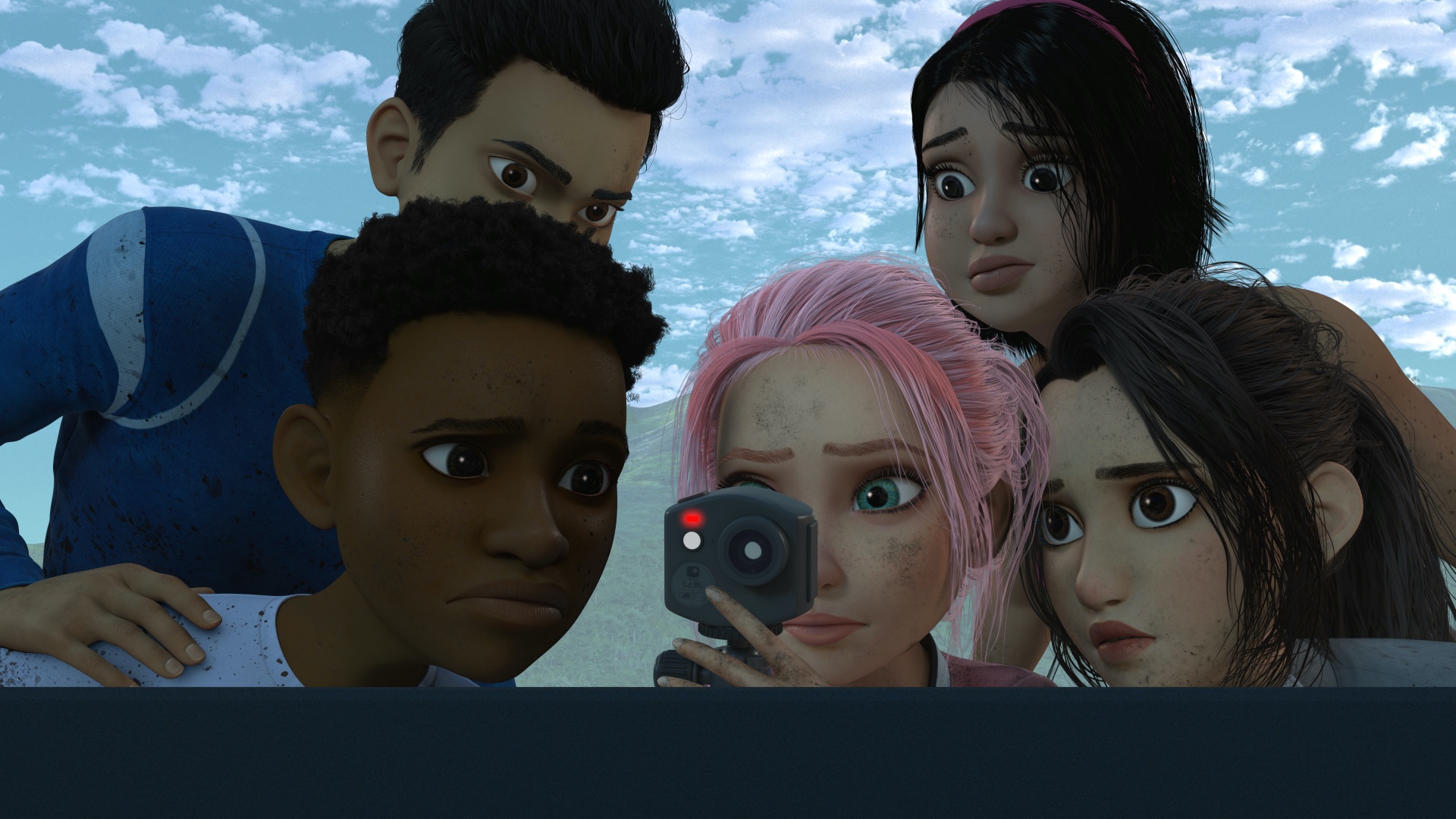 A pack of Compsognathus munches on frozen pizza amid the wreckage of Main Street… Nature is healing.

The second season of Netflix’s animated series Jurassic World Camp Cretaceous picks up soon after the first season ended, continuing the story of six teenage campers who were stranded on Isla Nublar after the Jurassic World incident ruined their chance at a fun camp experience. Even though the Indominus rex is dead (thanks, Ms. Mosasaur!) and the park is closed, Isla Nublar has more danger and excitement lined up for our campers, and several different plotlines converge at the end of the season. Let’s recap them.

What Happens to the Villains?

While the first season pitted the kids against the dinosaurs of the island and the catastrophically failing theme park itself, it didn’t have much in the way of human antagonists like we have come to expect in Jurassic movies. Season 2, on the other hand, introduces us to Mitch and Tiff (voiced by Bradley Whitford and Stephanie Beatriz).

When we first meet possibly the most annoying couple to step foot on an island full of dinosaurs since Jurassic Park III gave us the Kirbys, they claim to be ecotourists coming to document the dinosaurs in the aftermath of the human evacuation. Dinosaur nerd Darius immediately recognizes a kindred spirit in Mitch, and he and the rest of the campers are grateful for their state of the art campground and all its amenities. Mitch and Tiff’s intimidating and frankly kind of scary guide, Hap (voiced by Angus Sampson), on the other hand, has the campers divided as to whom they should trust.

Unfortunately, our self-proclaimed ecotourists end up being big game hunters, on the island to bag trophies before the dinosaurs go extinct again. Not even freshly cooked bacon and the promise of getting the kids off the island can redeem Mitch and Tiff when they threaten the children into helping them find the dinosaurs they want to hunt.

Using park technology to track the dinosaurs (and some herding knowledge gained in the first season), the kids play along but attempt to lead the hunters into a trap: the Tyrannosaurus is building a nest and she’s not afraid to defend it. The plan almost ends in disaster, but Hap proves he was on the kids’ side all along, dramatically sacrificing himself for them. Ultimately, Mitch and Tiff trap themselves. Literally, in Mitch’s case, as he gets caught in one of his own snares. His wife leaves him to become dino dinner, but soon becomes the victim of a pair of Baryonyx, the family of a dinosaur Tiff shot earlier.

You know what they say. Karma is a Baryonyx.

The Fate of Ben and Bumpy

After a terrifying fall from the park monorail last season, neurotic camper Ben and his adopted asymmetrical ankylosaur Bumpy were presumed dead by their fellow campers. The final shot of season one revealed their survival to us viewers, but the rest of the kids have to live with the guilt and grief until Ben and Bumpy come storming back into the story to help save the day. And you almost wouldn’t recognize them.

Thanks to her genetically altered growth acceleration, our little Bumpy is all grown up now and large enough for Ben to ride around on her. She’s big, beautiful and ready for action, lending a hand (or clubbed tail) more than once as the kids break into the tunnels under the park to restore power and save the dinos from the hunters.

But Bumpy isn’t the only one who grew up almost overnight. Though he still has an affinity for hand sanitizer, having to survive in the wild on his own has made Ben something of a wilderness badass. He even defeated Toro, the Carnotaurus! (Defeated, but not necessarily killed. When last we saw Mr. “I have a big head and tiny arms”, he had a new facial scar courtesy of Ben’s spear, and had fallen off a cliff but was still moving. Whether he succumbed to his injuries or will return to terrorize the camp fam remains to be seen.)

The end of season 2 sees all of the teenagers changed in some way or another, albeit not so dramatically. Like the dinosaurs at the watering hole, predator and prey mingling peacefully because of a shared goal, our campers might have personality clashes at times, but they put them aside and learn from each other because the only way to survive is to adapt to your surroundings.

Who Are “The Other Guys?”

With seemingly no hope of being rescued (although the emergency beacon they turned on did say it was received, so maybe someone is coming for them), Darius resolves to find a way off the island himself. Which might not be so hard, seeing as Tiff’s boat stalled out pretty close to shore when the Baryonyx power couple decided to play “I am the captain now.”

And anyway, the kids have basically faced everything the island can throw at them, right?… right?

Well, here’s the thing. All season, social media starlet Brooklynn has been noticing some weird humming sounds and cold spots on the island. Like really cold. Like, freezing a patch of flowers cold. This mystery appears to be connected to Eddie, the lab worker who mentioned “the other guys” last season but was inconveniently eaten before he could elaborate. He had a master keycard to open any electronic lock in the park (which Hap seemed to recognize), and a number Brooklynn found in the lab corresponds to the one on the door that all the cold air is coming from. The door where, unbeknownst to the kids, the cryogenic system has just failed.

What were they keeping under ice in there? Was it something to do with the hybrid program, or might it be a totally different project yet to be revealed in the Jurassic Park franchise, possibly involving the mysterious “other guys” and/or Mantah Corp? And what’s going to happen now that it is warming up? In the first movie, we learned that the gaps in the dino DNA were filled in with frog DNA, inadvertently giving the dinosaurs the ability to change gender like some frogs. Who’s to say a dinosaur made with wood frog DNA wouldn’t be able to wake up unharmed after being frozen just like the frogs?

With any luck, and if life finds a way, we will get a third season of Camp Cretaceous to answer all of these questions.