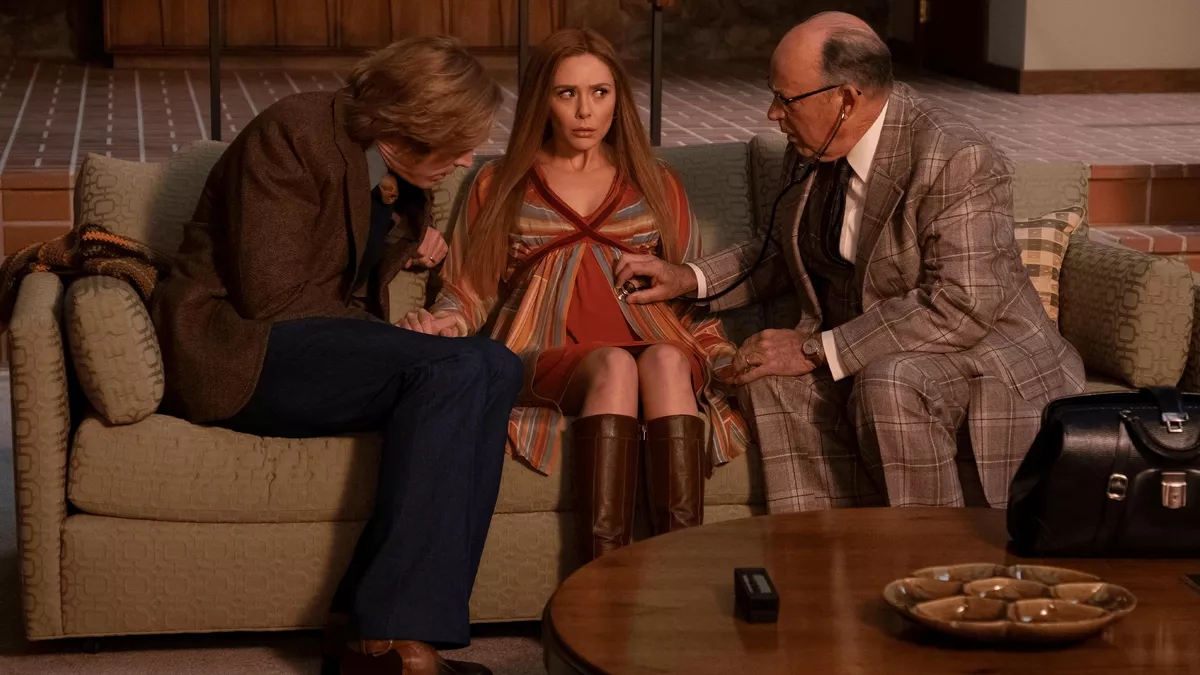 I don’t think I’m overstepping when I say that WandaVision is a weird show. It’s intentionally cryptic and there’s a lot going on. It focuses on two characters who have been in several Marvel movies but never truly got the spotlight. Even their romantic relationship in those movies has come off as forced to viewers at times. For comic fans, it’s an easier pill to swallow because it’s something familiar from the comics.

In the comics, the story of Vision and Scarlet Witch was that of two heroes with complicated backstories who found each other, fell in love, and lived happily ever after…until realizing that the point of serialized comics is to keep going and going. Soon their happily ever after became a horror story that destroyed their spirits and that damage lingers to this day.

Scarlet Witch’s history of triumph turning to torment is alive and well in WandaVision episode 3 as she goes through a full-on pregnancy in merely a day. The concept of Wanda having kids with Vision comes from the comics, and it’s one of the big red flags (scarlet flags?) in their immediate future. While things might end up all right down the line with little Billy and Tommy, we’re about see some dark stuff go down with their parents.

Even getting past the fact that Vision should absolutely be dead and the pregnancy only took about 24 hours, Wanda’s pregnancy should be raising questions due to Vision’s general biology. Vision may be capable of all kinds of feats, but he’s not really a human being and shouldn’t be able to put a bun in the oven. He’s just a pile of synthetic flesh grafted onto vibranium with an Infinity Stone on his forehead and the copied personality of a dead butler.

In the comics, Vision’s origins were just as convoluted. Also a “synthezoid,” the comics version of Vision was a special kind of high tech that was so advanced that he was nearly human in design. Mentally and emotionally, he was human enough, although his brain was copied from the personality of Wonder Man (a character whose only MCU appearance is movie posters in a Guardians of the Galaxy Vol. 2 deleted scene). He truly loved Wanda and was capable of performing under the covers, but impregnating her? That was an awful lot to ask us to buy.

Scarlet Witch’s mutant powers allow her to alter probability, so maybe she could take a longshot like Vision knocking her up and make it work. While they were working on that, they had a little adventure where they were kidnapped by the magical villain group the Salem Seven. During the climax of the battle, Scarlet Witch absorbed a bunch of magic and the ghost of Agatha Harkness (Wanda’s mentor in magic) told her to harness it and use it however she saw fit. Wouldn’t you know it, in the next issue, she was pregnant!

Sorry if that last paragraph was a lot.

Wanda would give birth to twins, Thomas and William. She and Vision would join the West Coast Avengers and things would go to shit. In one storyline, Vision would not only have his entire personality erased, but he’d be dismantled and autopsied to show that he was more mechanical than originally thought. It was writer Jim Starlin’s way of saying, “This is dumb. He absolutely cannot father children. Stop it.”

There was weird stuff going on with the twins too. When Wanda wasn’t around, her kids would just cease to exist. It wasn’t them fiddling with magic. It was the idea that they weren’t truly real and they were part of Wanda’s consciousness. Soon she discovered the truth about Billy and Tommy.

That truth is…um…really, really complicated. There’s stuff involving Mephisto and Franklin Richards and Master Pandemonium, who has the power of baby hands. And not the kind of baby hands that Donald Trump and Teen Titans Go Robin have. I mean that literal babies Billy and Tommy became his hands. It’s wacky.

Wanda did not take this news well and briefly turned villain because of it. It was a whole mess that involved her sexually assaulting Wonder Man. They ended up mindwiping Wanda of the whole incident, including her having kids to begin with. Ah, mindwiping. The superhero trope that never, ever ends well over time. Just ask Dr. Light and Batman.

Vision and Wanda returned to their usual soap opera filler stuff until Brian Michael Bendis decided that he wanted to freshen up the Avengers as a concept. In the big storyline Avengers: Disassembled, Scarlet Witch regained her memories, went a little nutty, and decided to have a whole bunch of stuff go wrong at once by abusing her powers against her so-called teammates. I’m talking alien invasions, She-Hulk losing control of her rage, Ultron attacks, exploding zombies, Tony Stark having a drunken rant at the UN, etc. She was stopped in a very anticlimactic fashion and the Avengers just decided that they were done being a thing.

A new Avengers team (now with mainstream appeal!) would show up months later and in the meantime, a group of teenagers tried to pick up the slack themselves. A younger version of the time-traveling villain Kang the Conqueror came to the present under the name Iron Lad and put together a team of heroes called the Young Avengers. One of these heroes was Wiccan, a boy named Billy with magical powers and reality warping, which were awakened after a mysterious meeting with Scarlet Witch.

At one point, he came across a troubled teen with speedster powers named Tommy who, despite having different parents, looked exactly like Billy but with white hair (white hair and super speed being part of Wanda’s brother Pietro’s whole deal). Iron Lad explained that not only were the two twins, but they were Wanda’s twins.

Yes, it seems that although the babies existed under questionable circumstances, they did actually have souls and those souls found other ways to live on. We don’t actually know the full story of how the connection works. Did the souls overtake existing children? Did the souls go back in time a few years to be reborn?

While unexplained, Billy and Tommy live on as the heroes Wiccan and Speed. After House of M, Marvel started to back away from Scarlet Witch being a villain and eased her back into heroism, including having her connect with her sort-of-children.

Now, we already know that the parenthood in WandaVision is going to end very, very badly for the mother and father. Ignoring Wanda’s desperate control over reality, there’s seemingly some kind of mysterious, cult-like reason for the twins to be born. Yes, there will indeed be tragedy.

On the other hand, Billy and Tommy may see the light at the end of the tunnel. The Marvel Cinematic Universe is not only lining up some torch passing, but we’re seeing various setups for the Young Avengers to take form.

We already have a teen version of Cassie Lang. The Hawkeye series is going to be about Kate Bishop taking up the mantle. The third Ant-Man and the Wasp movie will introduce Kang the Conqueror, which could in turn lead to his younger self appearing. Eventual team member Miss America is supposed to be in Dr. Strange in the Multiverse of Madness. There are even rumors and theories that Patriot will be appearing in some form in Falcon and the Winter Soldier.

Billy and Tommy were born fast and so they might be crime-fighting teenagers sooner than we realize.