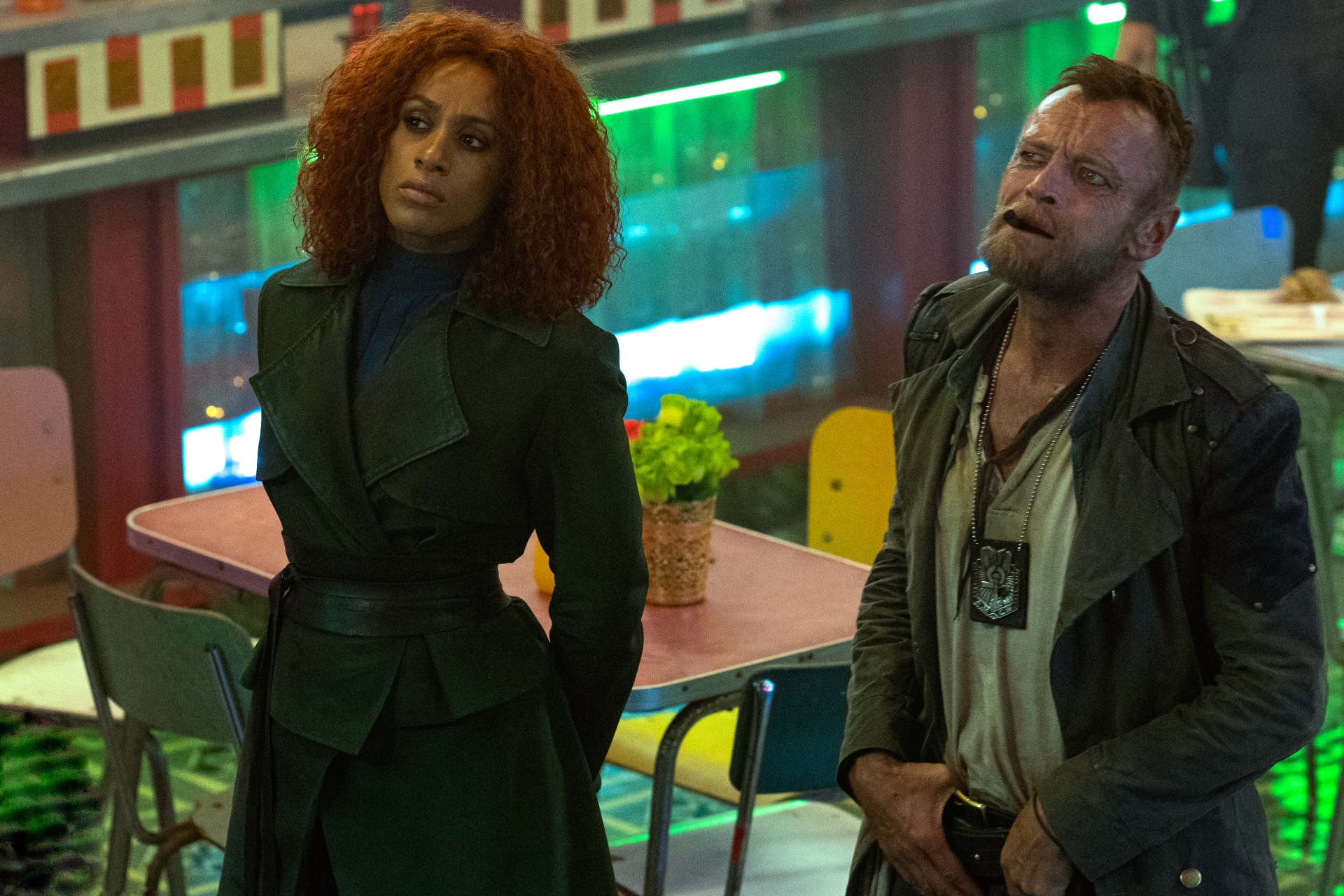 After a funny, enjoyable episode 4, in which The Watch finally got the upper hand, episode 5 shows Captain Sam Vimes taking the decision of whether or not anyone should be able to control the dragon plaguing the city into his own hands. After lying to the other members of the Watch, he takes Wayne the talking sword off to a lake where Unseen University disposes of dangerous magical artifacts, fully intent on destroying the sword himself and keeping the rest of his team from sharing the blame. Acting Captain Angua sends Cheery and Lady Sybil Ramkin following after while she and Carrot debate the morality of destroying a sentient sword—and investigate a Thieves Guild robbery that didn’t happen on schedule.

Meanwhile, Carcer has enlisted the Thieves Guild—which, he reveals, is responsible for the death of his father—to steal the sword from the Watch House. A motley crew of Ankh-Morpork’s best thieves ransack the Watch House, only to find the sword already missing. When random objects from Roundworld start appearing around the Watch House, Wonce realizes that Sam has taken the sword into the area around the lake, which is full of dangerous Thaumic energy.

Eventually, Carrot and Angua discover that Lord Vetinari did not order Vimes to destroy the sword—and that Carcer, Wonce, and the thieves have gone after Sam. This puts the whole team in the wastelands, facing their demons as the Thaumic energy tries to drive them mad.

If traumatic backstories are your thing, this episode is full of them. We get visions of Lady Ramkin’s vigilante attempts to convert criminals to law-abiding citizens, viewing her greatest failures and her belief that she can’t change anything—at least, she can’t without more power. Sam faces visions of his childhood, in which Carcer was the slightly-older child who looked out for him while both of them lived on the streets. These scenes are deeply steeped with guilt, and only Vimes’s conversation with Death, trapped in the body of a dog, lifts the mood. Cheery has a strange vision of a beard taking over her face and preventing her from breathing, a dark diversion from Pratchett’s original Cheery, who, as a female dwarf, proudly wore her beard because it was of great cultural importance. Angua faces the night of her first kill as a werewolf; abandoned in the forest by her grandmother, she’s forced to murder her human friend.

Only Carrot remains unscathed, a choice that both sets him aside as the earnest heroic hero, but also seems to necessitate darker backstories for the others as a contrast. (Even Captain America got a traumatic facing-his-guilt scene in Avengers: Age of Ultron. To let Carrot go unscathed almost undermines his depth.)

To prevent Carcer and the thieves from suffering the same fate, Wonce rigs up a magical device so that the head of the Thieves Guild will bear all their consequences for them. This neatly hand-waves away any concerns about them being able to catch up on Vimes for their epic confrontation.

Playing on a reference that Archchancellor Ridcully makes in the second episode, “Not on My Watch” is filled with the devices Ridcully has managed to bring over from the globe-shaped reality he calls Roundworld. Dated, but clearly based-on-Earth technology, these devices include a treadmill, a “damp garment dehydrator,” and a car with the license plate ARC HANT (which feels as though it must be a reference to something). When the Thaumic energy surrounding the objects interacts with the people traveling the waste, the items teleport to some other location (providing a Deus Ex Machina escape for the Watch toward the end of the episode).

The aesthetic is…even weirder than the show has been to this point, which is saying something. While Discworld’s novels give precedence for moving pictures (in Moving Pictures) and other magically inspired versions of modern technology, the appearance of Roundworld objects is one more element that makes The Watch’s Discworld feel incongruous and hard to navigate.

The appearance of a giant hand in the center of the lake, which prevents Vimes from destroying Wayne, giving the episode a bit of Monty Python and the Holy Grail’s atmosphere. It’s one of the few funny bits in the entire episode, and it’s sorely needed after all the characters facing historical trauma. As Wayne is about to get thrown into the lake, he pleads with Vimes:

WAYNE: I’ll retire to a farm.Get beaten into a plowshare. Toil the land until the end of my days. Just let me go in peace and we’ll say nothing more about it.

In fact, the scene also a brief novel reference; in The Color of Magic, a talking sword named Kring explains that he “spent a couple hundred years on the bottom of a lake once….What I’d really like is to be a plowshare.”

What Episode 4 had in forward momentum and well-used humor, Episode 5…doesn’t. It’s not a bad episode, and had it been surrounded by excellent storytelling previously, it would be an interesting development of character depth. But the series certainly hasn’t yet earned my trust enough to make this episode feel worthwhile.

The brief hints that the next artifact the team must discover is in The Dark of the Dark—a reference to dwarven mines and the sentient dangers therein—and Vetinari’s setting the team up against the guilds, intending to eliminate them for insubordination, aren’t really enough to make me feel like the show knows where it’s going. It make me curious to find out…but not in a way that makes me hopeful I’ll like the result.

The Watch is truly excellently acted, but unless the storytelling finds its niche, it will continue to flounder—and upset the fanbase of the original novels.