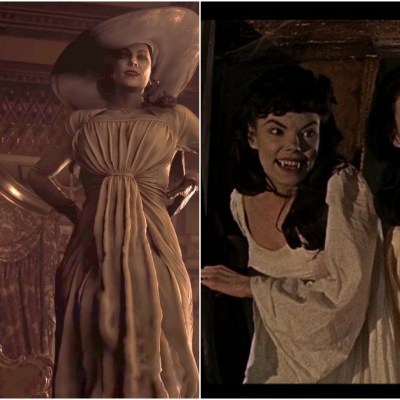 With The Medium, Bloober Team take a clever gameplay concept and uses it to weave a psychological horror story that is one of the most polished titles released by the studio to date but doesn’t quite reach its full potential. Repetitive gameplay elements and issues with pacing bring this game down quite a bit, but espite the game’s needling flaws, it’s still worth playing, particularly for those who have enjoyed the studio’s previous work.

The game is set in ’90s Poland and centers on Marianne, the titular medium who can communicate with lost souls in the “spirit world” by focusing on objects imbued with memories of those who have passed. The spirit world is a parallel version of ours, like a nightmarish reflection, and Marianne has the ability to traverse both realities simultaneously, which allows her to make connections between them in myriad ways. In-game this is conveyed via a split-screen presentation where the player can interact with both worlds at once and solve puzzles by searching for clues in both realities, which are tethered in strange ways.

Unlike Bloober Team’s previous games, which were presented in first-person, The Medium is in third-person, which recalls genre classics like Resident Evil and Silent Hill. The team handles this transition well, and they take full advantage of the split-screen mechanic, which is not persistent and only appears in select moments throughout the story (a tasteful decision on Bloober’s part—too much split-screen would have no doubt been headache-inducing). Overall, the game plays quite smoothly, from using Marianne’s powers to search for supernatural clues in the environments, to the directed camera angles and movements, which are all well thought out and never get in the way of the experience.

The story “starts with a dead girl,” a nightmare or premonition Marianne has of a girl being murdered by a lake. Haunted by this otherworldly vision, Marianne is getting her recently-deceased adoptive father’s house in order when she receives a mysterious phone call from a man who claims to know her innermost secrets, sending her on a grim detective mission of sorts, starting at the sprawling, abandoned Niwa hotel. There, she meets a young girl in the spirit world named Sadness, who helps her uncover the truth behind the man on the other end of that fateful call, as well as some shocking revelations about Marianne’s own past.

Narratively, this is one of Bloober’s strongest efforts. I found the story to be riveting, particularly in the latter half of the game. On paper, the dialogue and plot developments aren’t mind-blowingly good or novel, but the game’s unique presentation elevates the storytelling in a cinematic way. There are several surprising twists throughout the game that propel the story forward in a nice way, but the real strength of the script is its focus. Bloober Team has a knack for zeroing in on the intimately personal elements of its stories and exploring the human psyche in interesting ways both in the content and visuals, and the studio sticks to that philosophy here.

Stories in games sometimes get too mired in plot mechanics and don’t focus enough on the characters and their internal journeys, but Bloober Team never falls into that trap. Marianne’s innermost fears and desires are always the going concern as the story unfolds. Even as other characters get folded into the story (you may even get to take control of them…), Marianne acts as the narrative center of gravity.

The dramatic elements of the story are done very well, with some cutscenes eliciting a physical response from me that I absolutely was not expecting. Without spoiling anything, I’ll say that the story explores some ugly aspects of humanity that haunt us all in one way or another, particularly if you’ve lost someone close to you or have deep-seated familial issues. Bloober Team always aims for poignancy of the dark and devilish variety, and the developers achieve that here.

Another one of Bloober Team’s strengths is art direction, particularly when it comes to creating detailed, evocative environments that reflect what’s going on in the protagonist’s head in fascinating ways. The environments in The Medium are stunning not just for their visual fidelity, but for their interconnectedness with the mood and themes of the story. The deteriorating innards of the Niwa hotel clearly convey that some truly twisted stuff went down in there, and the surrounding forests are creepy but in a way that’s almost beautiful, with the game’s atmospheric lighting (bolstered by ray-tracing if you’re playing on a sufficiently powerful PC or next-gen console) setting the mood nicely.

And that’s just the real-world environments—the spirit world is a fiery hellscape of rotting flesh and viscera, which happens to be inhabited by a lurching monstrosity called “The Maw” whose sole mission is to consume you in violent fashion. While the two realities look distinctly different (Marianne’s got white hair and a glowing arm in the spirit world, a nice touch), they still feel artistically cohesive.

Most of the game consists of puzzles, whether it be scouring the environment for clues that reveal bits of the central mystery, or condensed puzzles that force you to switch between the two realities, changing the environment in the spirit world to allow real-world Marianne to proceed and vice versa. The latter, more traditional puzzles are a bit of a letdown. They mostly consist of you walking around the environment waiting for icons to pop up so that you can collect objects and place them in other objects to proceed. The tedium of this is alleviated by the dual-reality mechanic. For instance, if real-world Marianne is impeded by a powered-down elevator, spirit Marianne can break off and manipulate objects in the spirit world to power up the elevator in the real world.

The dual-reality concept is super cool for a while, but it’s only a bandaid for the deeper issue of played-out puzzle design. Most of the puzzles you encounter are, at their core, as rudimentary as can be. There are a few that forced me to actually use my noggin (one involving a keypad comes to mind), but for the most part, one should have little trouble figuring out how to proceed at any given time, which is a letdown.

I like that the game is more experiential than challenging in the traditional sense, but so much time is spent on these unimaginative puzzles that I found myself getting frustrated, more eager to explore and uncover the story than collect color-coded toy butterflies that I had to arrange in a certain order. The developers try their best to imbue these puzzle sections with storytelling details and dialogue but it does little to mask the monotony of the task at hand.

There are some set pieces later in the game that are exciting and fast-paced and dazzling to look at, but whatever momentum those moments create is stifled by the puzzles. It’s disappointing, because I think if there was a little less focus on the traditional gameplay aspects, the experience would be far smoother and the best parts of the story would shine. I know that many would complain about there not being enough in the way of traditional gameplay if the puzzle sections were reduced, but I think The Medium as an even more narrative-focused experience would be more effective overall.