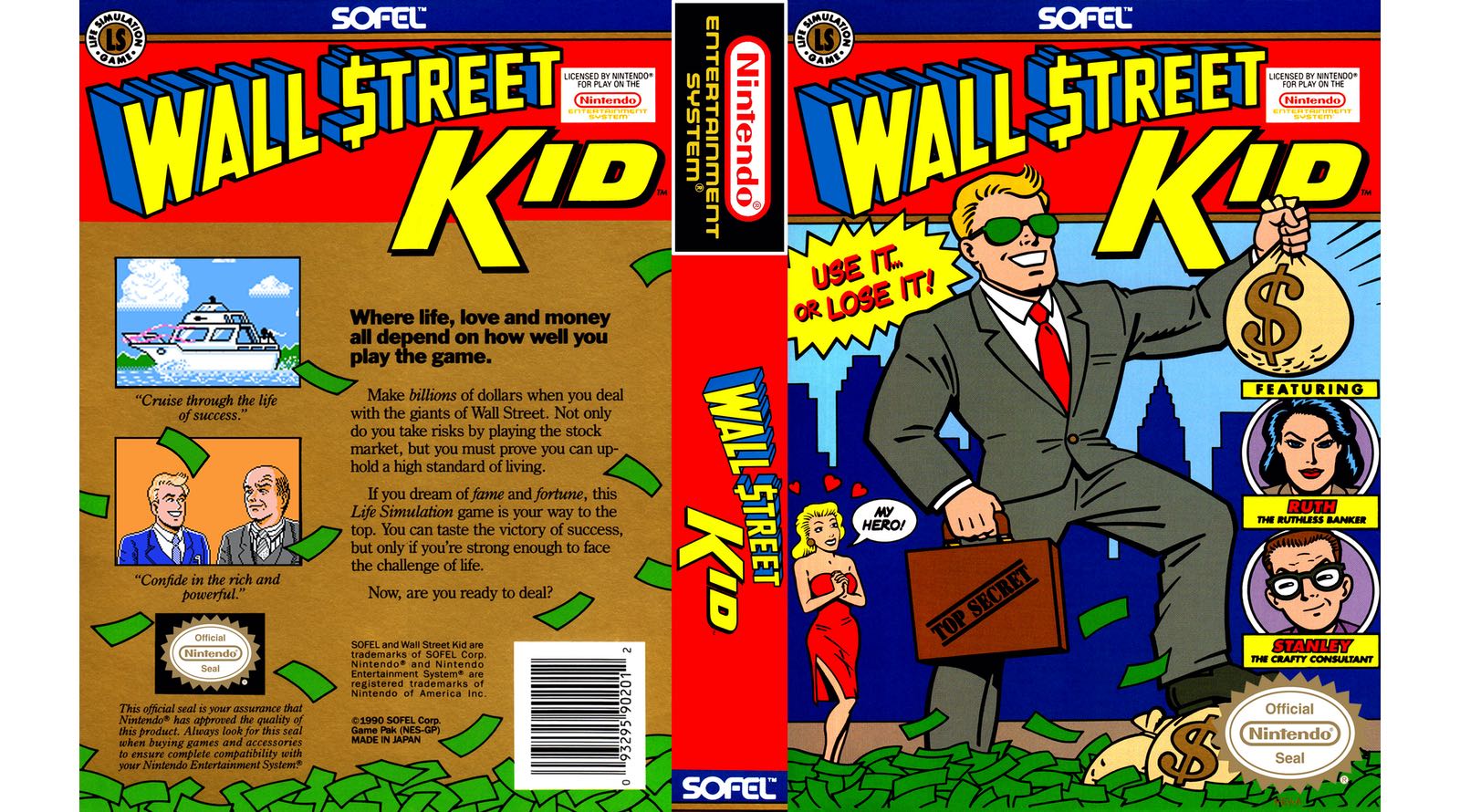 If you haven’t been following the simply incredible story involving the WallStreetBets subreddit using GameStop stocks to beat hedge funds and large investors at their own game (and make a bundle in the process) I highly recommend you start doing so. This bizarre saga isn’t over, and it will likely have repercussions that will be discussed for years to come.

While many of you probably didn’t expect to learn so much about the inner working of the stock market thanks to the suddenly surging stock price of a video game company left for dead, this is hardly the first time that the stock market and video games have crashed at a strange crossroads. After all, 1989’s Wall Street Kid for the NES practically existed to teach young gamers about the stock market.

Yes, there was a stock market video game released for the NES, and let me assure you now that it is somehow far more bizarre than you’re already imagining.

As a tool designed to teach kids about the stock market, Wall Street Kid is lacking. The basic gameplay sees you navigate a series of menus that show you your available funds, current stock prices, advice from industry insiders, and a few helpful hints about the stock market. There’s very little actual gameplay to speak of beyond choosing which stocks to buy and sell each day while occasionally spending your money and making the most of your limited downtime.

The game tries to spice things up by throwing you price curveballs based on what you’ve already bought and sold (thus fulfilling its obligation of being a sometimes unnecessarily difficult NES game), but as long as you stick to a basic “buy low, sell high” strategy and diversify your investments a little, you should be fine.

If Wall Street Kid were nothing but its menu-based gameplay, then I’d honestly be struggling to find a reason to talk about it now even during this unique time. However, the things that make Wall Street Kid so weird and memorable are found in the surprising amount of effort that developer SOFEL put into everything besides the gameplay.

It starts with the story. Yes, Wall Street Kid has a story, and it begins when Larry the lawyer informs you that your distant uncle Benedict has just passed away (thus fulfilling the “dead relative” part of any great RPG origin story). Seconds after delivering this potentially devastating news with a smirk on his mug, he tells you that as his only surviving relative, you now have the chance to inherit over “$600 billion in assets.”

Hold up. How was that the number the developers came up with? According to an inflation calculator, $600 billion in 1989 is roughly equivalent to over $1.25 trillion today. In 1989, the richest person in the world (John Werner Kluge) had an estimated net worth of “only” $5.6 billion. What was your uncle doing? Was he actually the GDP of Taiwan in a coat? How is it even possible that a small army of people wasn’t looking for ways to turn his corpse into a gravy train the moment that he hit the floor as a result of what I’m going to assume were suspicious circumstances or the aftermath of a party on cocaine island?

Remarkably, that absurd figure isn’t the strangest part of this conversation. The lawyer goes on to tell you that in order to inherit the money, you must “prove yourself” by taking $500,000 and using it to turn a profit in the stock market. More than that, though, you’re told you must “uphold the Benedict standard of living” by “pampering your sweetheart” and “moving into a decent $1 million house.” You’ll have one month to buy the house, but ultimately, your goal is to buy a castle worth “several million dollars” that your uncle’s grandfather seemingly lost years ago when he immigrated to America. He then concludes the conversation by telling you to have “a great April Fool’s Day” before informing you that this is “no April Fool’s joke.”

While I have nothing but respect for a man who begins a conversation with “Your uncle is dead” and ends it with an offhanded “happy April Fool’s day,” I have several questions about this premise that the game doesn’t answer.

First off, while I understand that they’re going for your basic Brewster’s Millions premise, that comparison doesn’t really hold up. In Brewster’s Millions, the lead character was supposed to spend a large amount of money in a short time as both a cruel challenge and as part of a lesson about how money alone doesn’t buy happiness. Here, though, the “challenge” is to make money off the stock market starting with a $500,000 loan which, despite the assurances of trust fund babies everywhere, doesn’t seem to be that difficult. If this game wanted to recreate the real challenges of playing the market, it would have started us off with student loans, a resume full of transitional jobs, and lingering anxiety that you’d honestly feel stranger without at this point.

I also have to address those real estate prices. I can only assume that developer SOFEL was trying to use large numbers in order to catch children’s attention because the implication that a $1 million house is “decent” (in 1989 as well, mind you) is a real slap in the face to this broke millennial whose chances of owning a home apparently go down with every avocado sold. While we’re on the subject, how does a man worth $600 billion not find a way to buy a family castle worth several million? For that matter, how far did his grandfather fall to go from a castle in Europe to needing to immigrate to America? That certainly doesn’t sound like he was upholding the Benedict standard.

We also have to address the premise of that “standard” you’re expected to live up to, as whether or not you’re a bad enough stock dude to buy elaborate things turns out to be the driving force of the game. Along with needing to make payments on your loans, you’re constantly asked to spend money on various items for yourself and for your girlfriend. Mostly, though, you’ll need to spend money on your girlfriend, who I honestly believe you also somehow inherited as part of this deal. In any case, young Prisila is constantly asking you for more things, starting with a $1,000 puppy. All the while, there’s the lingering threat that you will lose her love if you fail to purchase her all the things she wants.

This is one of the strange ways that the game tries to teach you about work/life balance. Along with needing to maintain a happy relationship, Wall Street Kid also asks you to participate in activities such as exercise, day trips, and shopping sprees in order to maintain your mental health. Failing to invest your time properly is as good as failing to invest your money properly, as both will lead to you ultimately failing.

That’s a lovely sentiment, but it’s contradicted by the fact that money presides over every single element of the game. Did you decide to go to the carnival today? You’re immediately confronted with the hours you lost that could have been spent playing the market. Did you fail to purchase the right gift for your girlfriend (whose full name, by the way, is “Prisila The Pricey Prima Donna”)? You’ve ruined your relationship. Fail to buy a house in month one, a yacht in month two, and a castle in month three? Hit the road, you absolute loser.

While I admit there is something tragically accurate about the idea of money interfering with many aspects of modern life, a guy telling me about the traps of greed while shouting from the top of a pile of money is a bit hard to hear properly Then again, I probably should be impressed he pulled himself to the top of that pile using nothing but his bootstraps and a large pile of money.

Also, I’m pretty sure that “Wall Street Kid” is a full-on stock scammer. Not only can you consult “Connie The Arrogant Advisor” (don’t get me started on this game’s names) for hot stock tips that often sound like a shining example of insider trading, but our “hero” is carrying a briefcase on the game’s cover that reads “Top Secret.” Is our man literally stealing classified info like the villains in Trading Places?

It all begs the question: “What is this guy going to do with $600 billion that he hasn’t been able to accomplish with a $500,000 loan?” He’s got a wife, a yacht, a home, a castle, and every commercial commodity you could imagine. What is the point of any of this?

The sad answer to that question may lie on the game’s cover which features the words “Use It or Lose It!” It’s the tragic slogan of a game that’s real message isn’t about security, happiness, or even a few of the finer things in life, but constantly moving money for the sake of the action well past the point when you’ve been able to consider what it is that you’d do with it even if you have it. It’s a truly fitting motto for a game that is so obsessed with moving the carrot every time you’re about to reach it that once you’ve caught and eaten the carrot, a mirage of it will continue to exist just outside of your reach.

Wall Street Kid probably won’t make you a stock market master, but this absolutely bizarre addition to the NES library does a fine job of showing the unbelievable greed and overwhelming odds that typically ensure that the ones who get the most out of it are the ones that had the most to start with. All the while, you’re meant to root for the man whose biggest problem in life is having to settle for the $500 puppy.

Somewhere, the Wall Street Kid is sitting in one of his castles with over $1 trillion in assets as he sharpens an ax, puts on some Talking Heads, and tells his soon to be cleaned off the carpet servants how much he misses the ’80s. For that alone, he deserves to be remembered as one of gaming’s greatest villains.