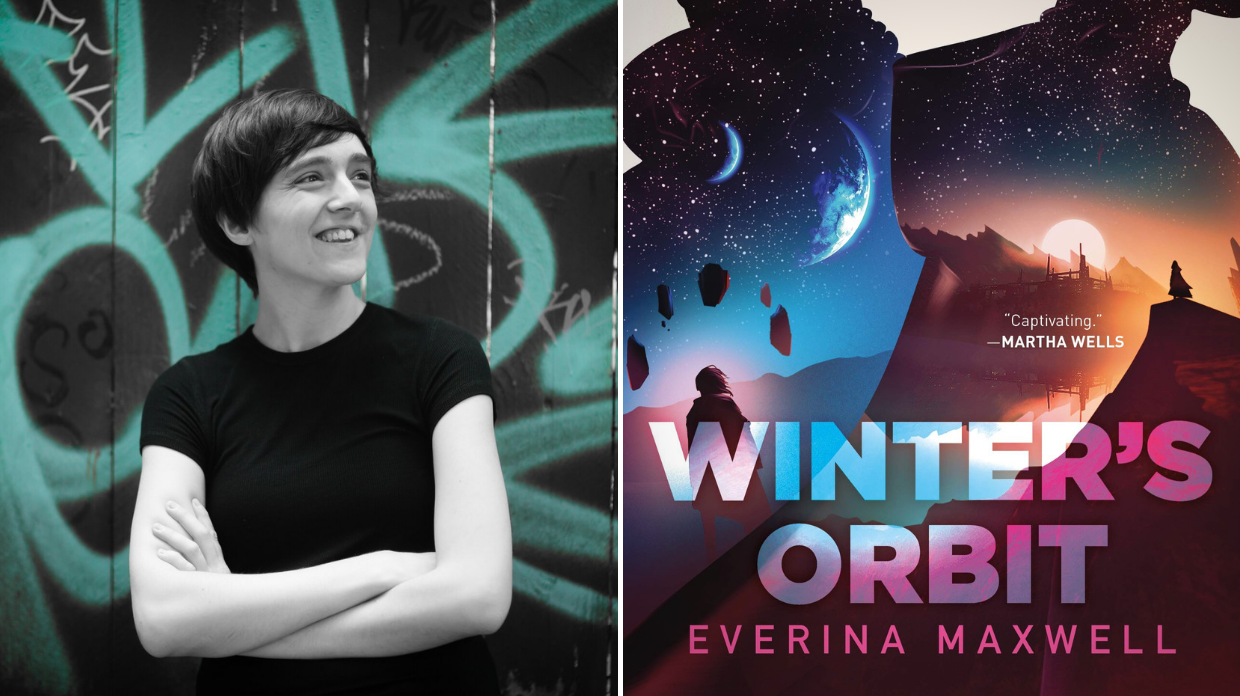 There have been some very public examples of works that began life as fanfiction (i.e. not-for-profit stories written in the already existing fictional worlds or pop culture, often by and for writers from communities underrepresented in commercial storytelling) only to later become published books— the most famous examples probably being E.L. James’ 50 Shades of Grey, Cassandra Clare’s City of Bones, or Anna Todd’s After. But not all works published on fanfiction websites are fanfiction. Fanfiction platforms, such as Archive of Our Own or Wattpad, also play host to “original” (not based on an existing canon) non-commercial fiction. While these original works are, by and large, less common than fic, they often have much in common with their transformative fandom neighbors.

Winter’s Orbit, a healing and action-packed queer romance space opera that hits bookshelves next week, began life as an original work on Archive of Our Own (AO3), where it gained an enthusiastic following. Now, British author Everina Maxwell, is hoping to find a broader, commercial audience for her story about two space princes in an arranged marriage on which the political stability of their solar system rests. The story of Winter’s Orbit path from original work on AO3 to published book is a fascinating one, and one that is emblematic of the increasingly candid impact the world of transformative fandom is having on the book industry and other spheres of the commercial entertainment world. We talked to Maxwell about her debut novel, what it was like to bring Winter’s Orbit from AO3 to Tor Books, and how the transformative fannish experience has impacted her writing.

Den of Geek: Where did the kernel for the story of Winter’s Orbit begin? Was it a character? A relationship? A setting? A theme?

Everina Maxwell: It all grew out of the first scenes: a good-natured prince is told to marry the widower of his cousin. It’s a political emergency. But his cousin and this diplomat had the perfect marriage, while the prince himself is a talkative disaster; how can he ever match up to the previous marriage? Was it as perfect as it looked? So I guess that’s a character, a relationship and a setting! I like to start from something that has an inbuilt tension. It means I’m anticipating scenes before I even properly plot them out.

Winter’s Orbit is told through the dual perspectives of the two main characters. Did you find it easier to write from Jainan or Kiem’s point-of-view?

Jainan—the diplomat—makes more sense to me; he’s introverted, anxious, and his thought processes flow logically from his basic assumptions about the world. On the other hand Prince Kiem is an absolute delight to write. It’s just fun to be in the head of someone who’s happy by nature and genuinely delighted to talk to anyone who crosses his path.

Winter’s Orbit is such a comforting book, but it also deals with some heavy issues, including domestic abuse. How did you go about balancing the hurt and the comfort of this story?

When it comes to fiction, I think the dark and the light are two sides of the same coin. Healing is possible; danger and trouble can pass. Though Winter’s Orbit is a “light” book, it’s definitely true that it contains heavy topics. To me, it’s reassuring on a very deep level that it’s possible to find happiness and joy even if life hasn’t been easy.

I do believe in content warnings to let people know if it’s a story will deal with specific upsetting topics, and I encourage anyone who wants details to check out the content warnings page (https://everinamaxwell.com/content-warnings).

Do you think romance and science fiction make good bedfellows?

They always have! I grew up reading writers like Bujold, who built up a universe where love stories were essential to the action plots and vice versa. I strongly believe books in every genre benefit from two people having unreasonably strong feelings about each other, and romance is just one subset of that.

Winter’s Orbit began life as an original work on Archive of Our Own. When and why did you start considering publishing it commercially and what did that process look like?

It was very long and meandering, since when I was writing it I didn’t have a long-term plan. At first I was just trading Kiem and Jainan snippets with a friend; later I posted them for more people to read, then when I had a whole story to share I put it on AO3. I still don’t know if that was technically the right place to put it, but it was the only writing website I was familiar with, I knew my way around it, and I’d read origfic on there before. The first draft was online for a couple of years. People very kindly read it and told their friends. I still have no idea how Tamara (my now-agent) found it, but she contacted me out of the blue and rewrote it with me, and then Ali Fisher at Tor picked it up and really helped me with the final rewrite. I wrote it five years ago now—I don’t know if that seems too long or too short, but it certainly doesn’t seem accurate.

How different is The Course of Honour from Winter’s Orbit?

The Course of Honour was laser-focused on Kiem and Jainan’s relationship. And don’t get me wrong, Winter’s Orbit very much is too, but working with a professional editor encouraged me to consider the implications of worldbuilding and plot events, and to build them out into a bigger picture. I knew some of this stuff from the beginning—I remember answering a comment years ago with some of the galaxy link explanations—but it wasn’t until the third major draft that it became part of the plot.

How did the decision to change the title come about and how did you settle on Winter’s Orbit?

It turns out The Course of Honour is already the title of a book! I’m bad at titles and my editor was really helpful on this one. I liked how it made the winter imagery more central.

What role has fanfiction played in your life as a reader and a writer, if it has?

I’ve both read and written fanfiction but as a very small fish in a very large pond—if you’re reading this and wondering what my AO3 handle is, you’ve almost certainly never come across it! Casual writing and shared-world creation with friends have brought me huge amounts of joy over the years, whether connected to a canon or not.

Fanfiction is such a broad category, loosely defined as non-commercial works based on existing stories, but I am super interested in some of the common narrative and stylistic traits that much of fic shares. How would you define Winter’s Orbit’s narrative and prose style and interests, and how much of that, if any, comes from the world of transformative fandom?

Winter’s Orbit’s primary concern is its two main characters. Where there was a choice between a revealing conversation about the characters and an action scene, the character work often won out. I think one thing that fannish experience gave me was a strong appreciation for character arcs and permission to unabashedly put them at the centre of a story.

This is a complicated question, since “fandom” includes so many people who are interested in so many different things! I will say that my experience has been based around stories with a laser focus on character development (including relationships) above everything else, and this focus produces some amazing works—though my narrow description there leaves out worldbuilding fans and so many others. Ultimately it’s a rich and creative community that has both its own tropes and room to experiment.

Do you have any plans to continue writing in this world and with these characters? (I would read so many more!) Either way, can you tell us what you are working on next?

I’m not totally ruling out revisiting these characters, though they’ve earned a bit of a rest for now! I definitely plan to continue in the Resolution universe. I’m currently working on a book set on a planet outside the Iskat Empire, starring two even bigger disasters than Kiem and Jainan (and an expansion of Remnant powers). I’m very excited for that.

And, finally, what stories, of any kind, have been bringing you joy recently?

There are so many good books coming up this year, which is lucky because generally it’s very hard to concentrate. On the queer SFF side, I’m very excited about The Unbroken by C. L. Clark, which is North African post-colonial fantasy, and She Who Became the Sun by Shelley Parker-Chan, which deals with the rise of a genderqueer emperor in fantasy China. I’ve read these two and they’re excellent. I’m waiting impatiently for Fireheart Tiger by Aliette de Bodard and The Jasmine Throne by Tasha Suri. Oh, and on the romance side, I really loved Division Bells, by Iona Datt Sharma, a beautiful queer workplace romance which is almost elegiac about public service. I’ll stop now—but it’s a good year for books!