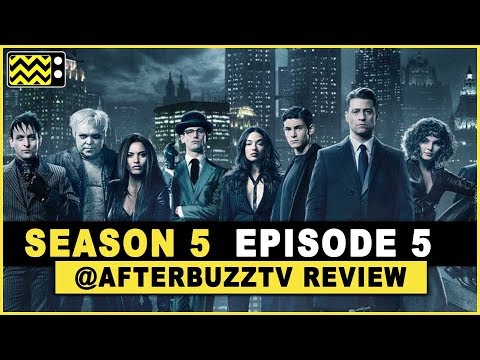 AfterBuzz
Share on Facebook
Share on Twitter
Share on Pinterest
Share on LinkedIn
Join Karla Beltran, Steve Kaufmann, and Zack Peter break down the newest episode of Gotham! Season 5 Episode 5 Pena Dura in which A military task force, led by Eduardo Dorrance is called in to provide relief to Gotham. Meanwhile, Nygma looks for answers from Penguin, who leads him back to Hugo Strange. Then, Bruce is concerned about Selina’s recent behavior.

And also some other stuff…Probably.

ABOUT GOTHAM:
Gotham is an American crime television series developed by Bruno Heller, based on characters published by DC Comicsand appearing in the Batman franchise, primarily those of James Gordon and Bruce Wayne. The series stars Ben McKenzieas the young Gordon, while Heller executive produces along with Danny Cannon, who also directed the pilot.

As originally conceived, the series would have served as a straightforward story of Gordon’s early days on the Gotham City Police Department. The idea evolved not only to include the Wayne character, but also to tell the origin stories of several Batman villains, including the Penguin, the Riddler, Catwoman, Poison Ivy, Two-Face, the Scarecrow, Mr. Freeze, Hugo Strange and the Joker.