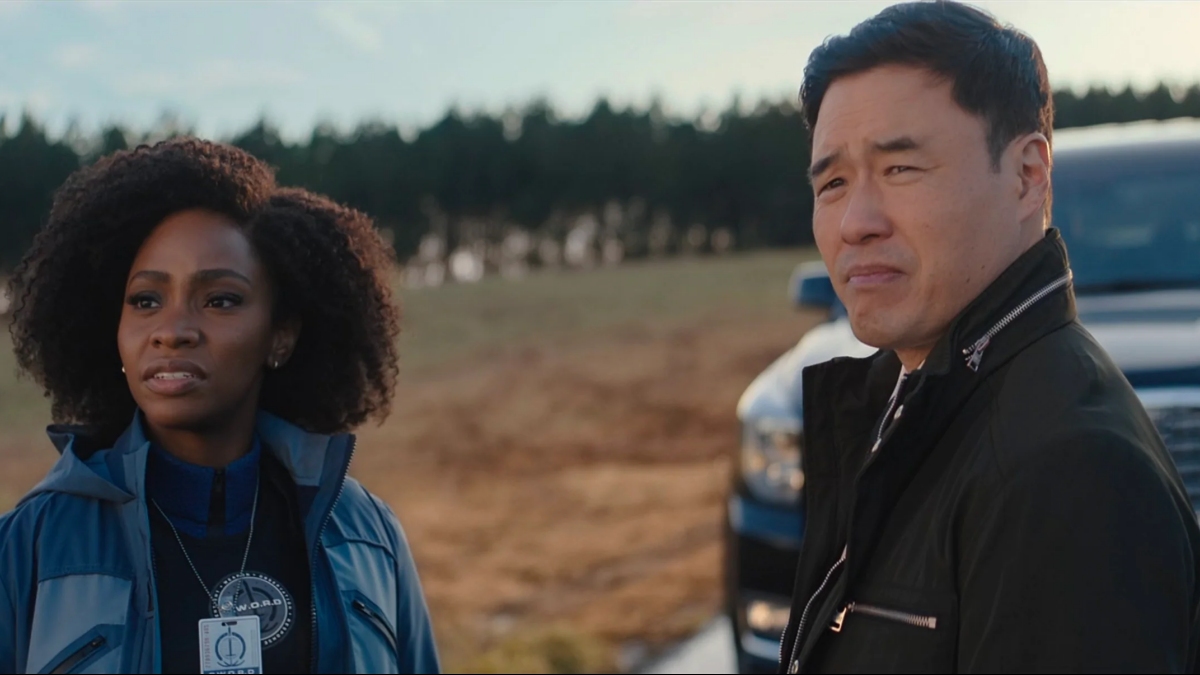 Now that WandaVision episode 4 has expanded a bit to show more of what’s going on, it really ties into what made the first phase of the Marvel Cinematic Universe work, but in a very surreal way. The first Avengers movie was about the culmination in connections and bringing together the top heroes that existed so far in continuity. Now that we’re four Avengers movies in and we’re taking our first step into the era of Marvel’s Disney+ TV shows, we have such an odd collection of characters from all over the MCU converging.

Really, it’s pretty wild. We have two Avengers who otherwise never had all that screentime. We have a supporting character from Captain Marvel who first appeared as a child now a central character all grown up. We have the comic relief from the first two Thor movies. Then there’s that FBI agent from Ant-Man and the Wasp, whose only role was to be a pestering doofus to the hero.

Yes, Agent James Woo (played by Randall Park), the guy who tried to make sure Scott Lang was making good on his house arrest, is trying to figure out what the hell is going on in Westview, New Jersey. That goofball from Ant-Man and the Wasp is the guy talking over Wanda Maximoff’s radio in episode 2 to try and figure out who is controlling her.

Dorky or not, Jimmy Woo has a long history with Marvel. In fact, he predates all the other characters on this show. He even predates Marvel itself!

He first appeared in Yellow Claw #1 from Atlas Comics, created by Al Feldstein and Joe Maneely, though Jack Kirby pretty much took over as of the second issue. The Yellow Claw was a Fu Manchu-type yellow peril villain and FBI Agent Jimmy Woo was the agent assigned to track him down. With Yellow Claw being one of those awful racist caricatures that the era was known for, Woo was seen as almost revolutionary in comparison. He was Asian, but not a walking joke based on his nationality.

Yellow Claw only lasted a mere four issues, but its status as a comic book footnote would ultimately help out Woo in the long run.

Woo was brought back in the late-60s as an agent of SHIELD. He spent the next many decades being a run-of-the-mill go-to SHIELD guy. Someone you would merely throw in a scene, even though the focus was on someone like Nick Fury or Dum Dum Dugan. Really, one of his more notable appearances was in the late-70s Marvel Godzilla comic. He admittedly didn’t do much, but he survived a few confrontations with the King of the Monsters and that’s awesome!

The late-70s also laid some important seeds for Woo’s future in an early issue of Marvel’s What If? series. The anthology comic was usually about Uatu the Watcher focusing on an alternate reality and seeing how things would have ended up if history had zigged instead of zagged. A world where Captain America wasn’t frozen, a world where Spider-Man prevented Uncle Ben’s death, etc.

The ninth issue, “What If the Avengers Had Fought Evil in the 1950s?” was written by Don Glut and drawn by Alan Kupperberg and Bill Black. As a framing device, the story was being watched by Avengers members Iron Man, Captain America, Thor, Vision, and Beast. Looking into the past of an alternate reality, Iron Man saw an adventure where a bunch of 1950s characters teamed up and called themselves the Avengers.

The team was made up of:

There were also appearances by Namora and Jann of the Jungle. Pretty sure one of the villains showed up in one of the obscure “Commie Smasher” Captain America issues.

Anyway, after the good guys won the day, President Eisenhower told them to disband. The way he saw it, the world wasn’t really ready for a ragtag super team of weirdos. Watching this, the mainstream Avengers noted their similarities to the members of this alternate lineup. Captain America and 3D Man were cut from the same cloth in terms of fighting style, Iron Man and Marvel Boy were both geniuses with cool gadgets, Thor and Venus were both gods fighting alongside mortals, Vision and Human Robot were both androids with heroic hearts, and Beast and Gorilla Man were both smartass talking furballs.

The Watcher appeared at the end to remind the reader something important: just because Iron Man saw this in an alternate reality doesn’t mean it didn’t happen in regular continuity. After all, who’s to know? It was a neat team-up that was quickly swept under the rug and didn’t have any lasting complications.

Other than a minor appearance in Avengers Forever, the What If? issue finally got the callback it was looking for in the mid-2000s. The team of Jeff Parker and Leonard Kirk did a miniseries called Agents of Atlas. The idea was that while they didn’t call themselves the Avengers, those 1950s heroes did indeed secretly team up back in the day.

For the most part, the characters were the same, but there were plenty of tweaks. Since their origins were tied to the 1950s, Jimmy Woo was aged up immensely for it to make sense, only to be de-aged through Marvel Boy’s technology. Marvel Boy himself was renamed the Uranian and they altered his backstory since one doesn’t really live a normal life on the surface of Uranus (tee-hee). Human Robot was referred to as M-11 and would rarely speak. 3D Man wasn’t part of the team, but they eventually brought in the hero Triathalon to fill in the role. As for Venus, she was retconned into being a guilt-ridden siren of the sea who for a time believed herself to be the goddess.

Most importantly, it gave us this panel.

Sadly, despite its high-quality and Marvel trying again and again, Agents of Atlas never truly caught on. It did last roughly as long as Guardians of the Galaxy did around the same time and we all know how successful that was once it became a movie. Come on, Marvel! Give us some cinematic Gorilla Man! You already know that people love wise-ass talking animals!

Marvel rested the concept for a few years until bringing it back as a new all-Asian superhero team led by Agent Woo. So Woo still has stuff going on.

Maybe WandaVision will be a stepping stone from learning close-up magic to actually being the leader of his own group of heroes. One day…