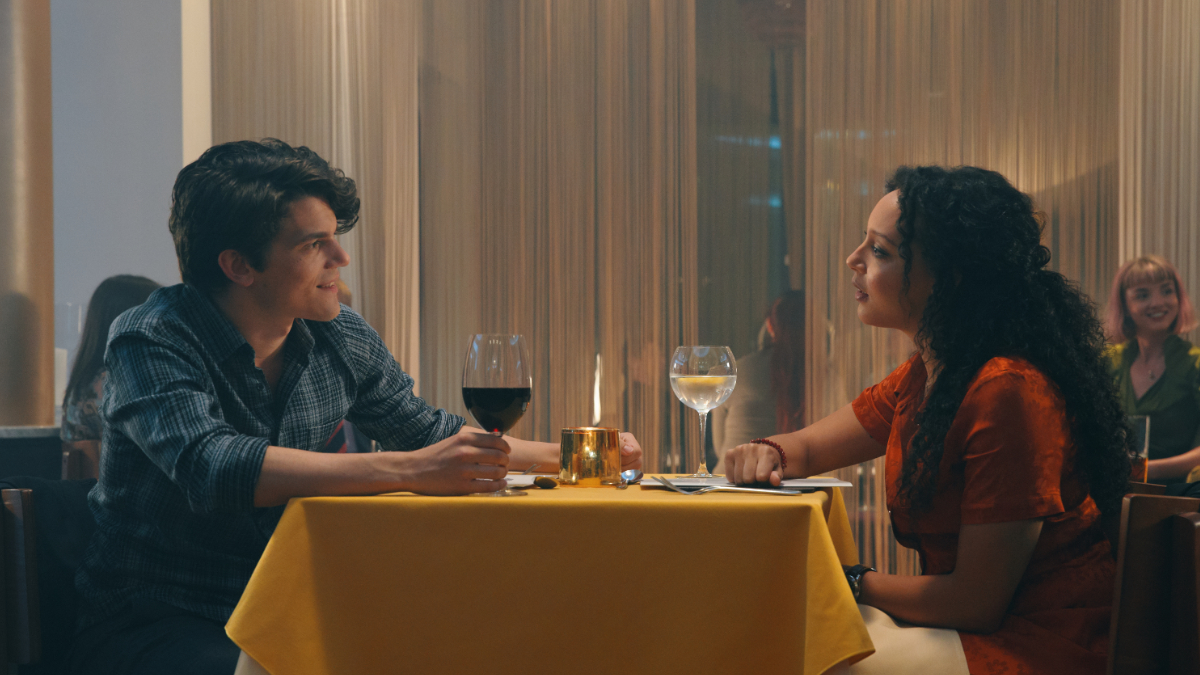 Warning: this A Discovery of Witches review contains spoilers

For a show about vampires, A Discovery of Witches is relatively light on blood and gore. Its undead creatures are civilised types, more likely to be found sipping a 1982 Latour than fang-deep in a carotid artery.

That all changed this week, as season two took a 21st century detour with a police thriller slant. A mystery vamp has been going to town on warm-bloods, and, hope Domenico and Gerbert, it could spell the end for the de Clermont dynasty.

It made a refreshing change to spend time in the here and now instead of the there and then. Modern clothes, modern speech, a modern-day hook up between a couple of hot young things… well, one hot young thing and one cold old thing doing a remarkable impression. (A stray thought: if Phoebe noticed the temperature of Marcus’ hands in the auction house lobby, later on in bed, did she not notice the temperature of… the rest of him?)

Marcus and Phoebe’s flirtation injected a vibe missing from this show since Matthew and Diana became old marrieds in fancy dress. There was humour, there was a spark, there was questionable dialogue (“I don’t bite”. You might not, can’t say the same about that line.) It was a big gulp of fresh air before we return to ye olde search for the book, and set up an ongoing mystery for the season.

The de Clermonts, we learn, have a secret. (But more a Hollywood secret, which almost everybody knows about and regularly discusses at the better class of party). Ysabeau’s bloodline contains the genetic illness ‘blood rage’, which gives vampires extremely bad table manners and leaves their victims looking like forked-through piles of minced beef and onion, like the one on this week’s mortuary slab. The mystery Oxford vamp is infected, which means they must be descended from Ysabeau’s line. As Domenico fails to recognise their scent, can we assume it’s not anyone we know?

There’s a pressing need to discover mystery vamp’s identity, because each new mangled corpse is a step closer to blowing the vampires’ cover among humans. You know – that carefully constructed cover that sees the de Clermonts living continuously in the same thousand-year-old castle and fooling everyone by cleverly changing a vowel in their surname every two-hundred years. Impenetrable.

Though, as Phoebe proved this week, perhaps that’s all the cover vampires need. Even when one tells a human what they really are, complete with fridge-blood and a handy pile of photos featuring their unchanging face throughout the centuries, they’re not believed.

To give Phoebe her due, I’d more readily accept Marcus as a trust fund millennial than a centuries-old supernatural creature. There’s something irrepressibly youngest-child about Edward Bluemel’s character, who bounces along with twenty-something vim, seeming carefree, decent and unencumbered by his past. A baggage-free vampire? Whatever next.

Marcus has been kept young by Matthew, and not only in the obvious way. By keeping the family’s inherited illness a secret, Marcus has been protected from a dangerous truth. Entrusted by Matthew to be the Grand Poobah of the Knights of Whatnot, protectors of the unprotected, you’d think Marcus would also be trusted with the knowledge of the dangerous illness carried in his blood. It just goes to show that no matter how many hundreds of years they’ve been alive, parents are never quite ready to see their kids as adults.

The Knights of Lazarus came under much discussion this episode, though we’re yet to see them in action. How many knights are there? What’s the official uniform? And exactly what kind of protection do they offer? When Sophie and Nathaniel’s baby is born, perhaps we’ll find out. Until we see something of them, it’s hard not to picture the impeccably tailored and enjoyably overdramatic Knox and Gerbert facing off against Monty Python’s Knights who say Ni. (If Marcus is a Douglas Adams fan, ten quid says he’s a Holy Grail guy too).

Finally, the episode took us inside Sept-Tours, a trip which turned out to be not quite worth the wait. There were no Joan Collins/Linda Evans-style fireworks between Ysabeau and the Aunts, only a frustrating plot thread about Em ploughing her own magical furrow and breaking a solemn promise to Sarah. Hecate, protect Em from her experiments. TV can’t afford to lose yet another loving lesbian relationship. Thanks to the missing Elizabethan miniatures, the Aunts know that Diana and Matthew made it back to the past, but that didn’t stop Em from trying to raise the dead.

Speaking of misbehaving witches, wherefore Satu? Come back you crazy Finn, you’re missed. Until next week.