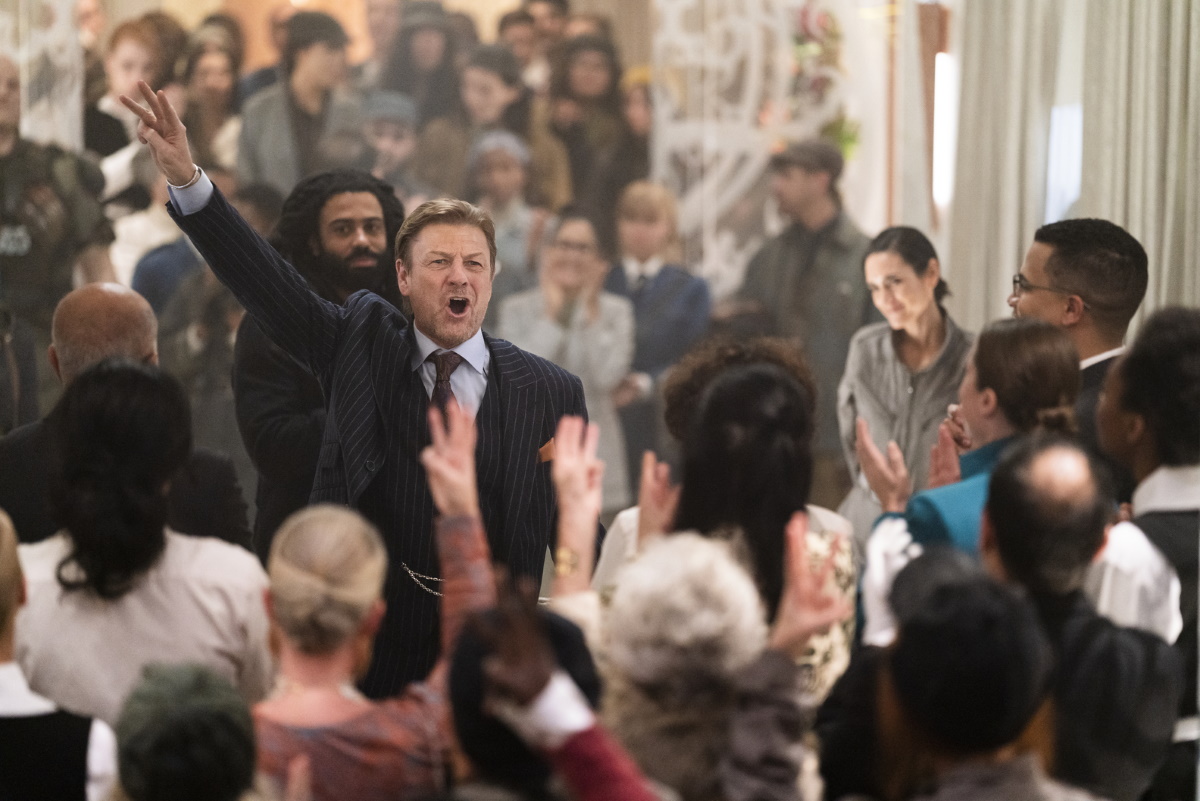 A show like Snowpiercer seems tailor-made for the winter. After all, it’s cold outside, so you might as well stay in. Sure, you’re probably still quarantined with your household after a long year, but at least you’re not stuck on a train. At least you’re not stuck on a train rattling around a frozen death world eating canned meat while waiting to become fertilizer (or canned meat yourself). As bad as things might be out here, at least it’s not Snowpiercer-bad these days; there are signs of hope everywhere, with vaccines in our world, and the recurring snowflakes seen every time the train is shown from outside.

Of course, in order to reclaim the world, Snowpiercer and the travelers along for the ride will have to survive Big Alice’s return, their own internal strife, and the machinations of the devious Mr. Wilford (Sean Bean, practically twirling a mustache). That’s making the bold assumption that Melanie’s hypothermia didn’t bring about hallucinations, and that the information found in her snow sample taken outside is accurate. In order to get any real information, they need weather equipment, and that’s the sort of thing that was stored on, you guessed it, Big Alice. The two trains will have to work together, one way or another.

Throughout the first season of Snowpiercer, Daveed Diggs’ Andre Layton was a fish out of water. He was the random tailie wandering into first class, making people uncomfortable and sticking his nose in where it wasn’t wanted to figure out the truth behind the murders in third. He was the train detective as much as he was the leader of a revolution, and while one job made the other possible, it was no less important.

Either way, it makes for a nice mirroring of the first season, albeit in a more contained fashion. Till has to figure out how maimed Lights (Miranda Edwards) and for what reason, while Layton wrestles with the bigger fish of diplomacy with Big Alice and Mr. Wilford. Both plots, particularly the slapdash way in which Layton and Roche (Mike O’Malley) force Till into taking the job, are satisfying. Layton is used to working in secret, to scheme against schemers as Wilford might say, so their back-and-forth at the meeting is very well done. Sean Bean gets to preen and make big statements for the public, and Daveed Diggs gets to wryly get jabs in and deflate the impact of the more egotistical Wilton with verbal barbs.

It’s a great use of both actors, particularly Sean Bean’s charm and Daveed Diggs’ comic timing. Both men get to show a little bit more life than Jennifer Connelly’s Melanie Cavill ever did, though the character seems a bit more free to be herself now that she’s no longer pretending to be Wilford in an attempt to keep the train running. That sort of stress would be enough to tamp down anyone’s nature, unless they’re a pot-smoking sociopath like Wilford or an idealist like Layton.

One of the clever things about Audrey Nealon’s solid script is that it’s clear Wilford is by no means a fool. He might have his moments, but he’s a vicious man with a capacity for revenge and a flair for the dramatic. Certainly, he might be have underestimated Layton at first, but he’s gotten a measure for the man, and Wilford clearly has friends on the inside (as shown by the mutilation of Lights’ hand into the Wilford W).

Ruth (Alison Wright) probably doesn’t have the capacity to hurt others herself; she’s a true believer in hospitality’s mission, but she was never the hand holding the freeze gun. This mutilation seems to be more the speed of LJ (Annalise Basso) and her new partner in crime, the disgraced former brakeman Oz (Sam Otto). Though they’re a bit too obvious to be used as Wilford cats paws, they’re a pretty useful distraction.

Wilford himself is a pretty useful distraction. Christoph Schrewe’s direction makes it pretty clear that Wilford is a potent demagogue figure; if the adoring crowds he waves to on his walk through Snowpiercer aren’t evidence enough, then true believer Kevin killing himself at Wilford’s request should push that point home pretty neatly. Till’s walk through the train is enough to set that scene; Snowpiercer had a change at the top, but everything else is still up in the air and danger is still around every corner. Snowpiercer was dangerous before the tail turned into Cold War Berlin; it’s no less dangerous now that there are no rules and nothing keeping First and Third away from each other.

Will the good news help? Or will it simply make those who have power, like Wilford, fight harder to keep it? Like Melanie’s snowflakes, it’s all up in the air. The first episode did a good job of capping off the stories of the first season, and “Smolder to Life” is the beginning of the second season in earnest. Like the ash piles of Melanie’s youth, it only takes a spark, and Wilford is playing with matches like an unsupervised toddler. Whether it’s Melanie or Layton at the head, Snowpiercer remains a powder keg waiting to blow, and it’s up to Layton to outmaneuver both Wilford and conspirators on his own train and save humanity.