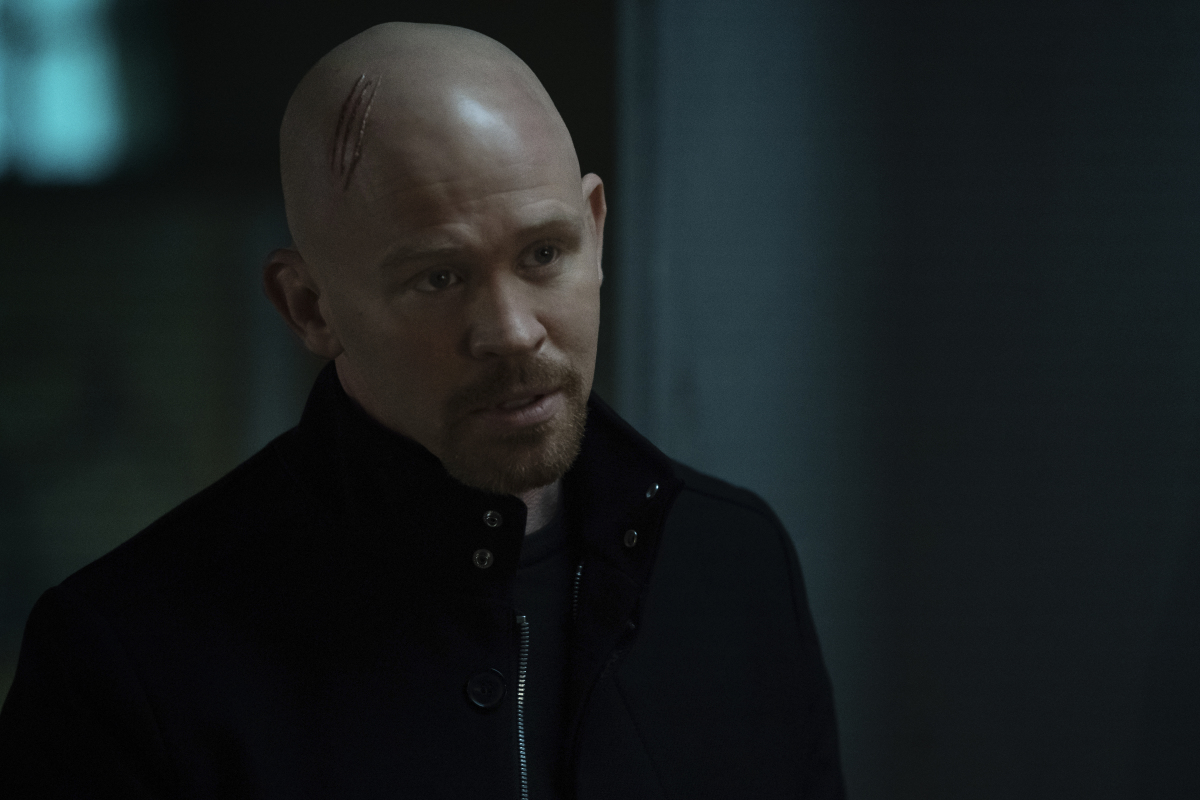 Classic Batman villain Victor Zsasz burst onto the scene in this week’s Batwoman with what is simultaneously the creepiest and most fun villain introduction on the series yet. Tricking his way into a hotel suite with a bottle of high end champagne, the notorious hitman took out a high roller and his mistress by order of the man’s wife, telling them so as he chased them around the hotel room and killed them, making sure the mistress knew Zsasz’s client splashed out more than her now-dead husband.

The scene is full of snappy dialogue, juxtaposing Zsasz’s charm with the brutal surety with which he does his job and the sickening creepiness of rearranging the bodies to look like they’re sleeping soundly in the hotel bed. It’s also the perfect introduction to the latest iteration of a character that Bat fans have loved for years, played here by Alex Morf, who spoke with Den of Geek about his performance.

“I think [episode director] Holly Dale did a great job of guiding us and directing us. It’s a great intro to sort of the combination of his lightness and playfulness and the ease with which he has at this point in his career after becoming a master at what he does,” Morf says. “And also, the abruptness of his violence and how quickly he can strike. It’s an exciting, unpredictable cocktail, really well-boiled down in that first scene.”

Morf is a longtime fan of all things Batman, citing Michael Keaton’s portrayal in the Tim Burton films as one of his favorites. He took the job because of the character, whom he knew from playing the Arkham Asylum video game and from Anthony Carrigan’s “brilliant” portrayal on Gotham, on which Morf guest-starred as gang leader Sykes in 2019.

“I was on Gotham during the last season. And in some ways, there was something that was a little bit less than satisfying about playing that part because in my head I made up all kinds of backstories and, you know, trajectories and stuff like that and the script had an endpoint. At that point, you know, they knew it was the last season. I never felt like I got to explore that character much from a personal standpoint.”

While it’s obvious to assume an actor from Iowa and a killer-for-hire character who tallies his murders on his skin have nothing in common, another reason Morf took the role was that, in Zsasz, he saw an opportunity to play a fun, juicy part that fit him pretty well. As Morf puts it: “It’s always a weird thing to feel that as an actor, but as much as you can sort of like find the places where any character sort of like sits in your body, it’s helpful.”

“We’re both independent contractors, you know,” Morf adds of his similarities with the character. “We’re hired for a specific field [for a job] that we’ve been doing for quite a while now. We take a lot of pride in what we do. We both like to have fun. We both enjoy life. We’re both curious about people. When I started thinking about it, there was quite a few things. And I was like yeah, I could be this guy, if he wasn’t a murderer.”

Victor has a noteworthy experience for any character in a superhero show: he interacts with Ryan both in the suit and out of it. Presumably he has no idea that they’re the same person, but it adds to their relationship dynamic nonetheless, even if that knowledge is one-sided.

“I think he likes people,” says Morf. “I also think he really values his privacy. And when he meets Ryan in that bar, I think at first he thinks it’s just somebody who’s trying to bug him and I don’t think he has any interest. And then, when he finds out that she dated Angelique – I think Victor has his ear to the ground, especially in criminal circles, and knows what’s going on.”

Victor also has something of a history with Ryan; he knows her ex, Angelique. This is the first we’re hearing about her, but next week’s episode, “Fair Skin, Blue Eyes,” seems like it will shed a bit more light on a woman from Ryan’s past who’s apparently intimidating enough to get Victor’s attention.

“The fact that [Ryan] was able to break someone’s heart so severely instantly makes him really curious, because I think Victor’s kind of obsessed with pain, and even emotional pain, not just cutting himself,” Morf says. “I think that he’s obsessed with the idea of finding somebody who’s capable of destroying him. And so it just makes him lean forward.”

While Victor doesn’t know that Ryan and Batwoman are the same person, he seems to be responding to the idea of a person who might be capable of destroying him in each set of interactions.

“When Victor’s paying attention to you I think he’s pretty perceptive. So, I think that same thing is true in the interaction with Batwoman. He’s instantly interested in her because I think he misses having an adversary and he’s a little nostalgic for the old days [before Batman disappeared] of having somebody capable of hurting him. And I think he sees potential in Batwoman.”

One of the best lines of the episode has to be Victor’s self-professed love of lesbian drama. Coupled with a certain effete affect throughout the episode and as part of the same pop culture that recently saw  Chris Messina and Ewan MacGregor dance around making their Zsasz and Black Mask sexually or romantically involved in Birds of Prey, it raises questions. Is Morf playing with Zsasz’s sexuality here?

“Definitely. I mean, not really like overtly, because I don’t think that that’s completely in the episode,” Morf says. “One of the things I think is so cool about this show, and makes me feel proud to be a part of it, is that it’s not afraid to lean into the complexities of sexuality and human nature.”

The action work this episode was especially good. Zsasz is known for his knife work, which some versions of the character do from afar, or only once they have their prey tied up, but here, Victor vaults over furniture, physically takes people on, and even fights with Batwoman. Morf has experience with hand-to-hand combat and was a wrestler for 21 years.

Morf says, “It was really fun, especially to get to spar with Javicia a little bit, she’s such a powerhouse. We really enjoyed getting to learn that choreography and lock horns a little bit.”

Batwoman has some unusual interactions with Zsasz – both in and out of the cowl. His observation that she doesn’t seem to be comfortable in her own skin (e.g the batsuit) leads her to realize that she needs to take ownership of her role, as demonstrated by changing up the suit and wig to fit her. It’s a great moment for Ryan’s growth as a hero, and it’s intriguing that the Batwoman writers made Zsasz the catalyst.

Morf says, “I would certainly not take credit for it, because I think Ryan’s the one who ultimately pulls that trigger and makes that decision and claims her own space.”

Still, he thinks it reflects something interesting about their relationship: “If they weren’t a villain and a hero, part of me thinks maybe they have some stuff in common, which is always I think a little scary for a hero too, to be seen by somebody who’s their adversary, you know, to be presented with something that maybe they weren’t expecting.”

There’s a great moment during the climactic fight when ever-resourceful Mary whacks Victor and manages to make a mark on his head. For a guy covered in scars of his own making, he doesn’t seem keen on the idea of someone else leaving one, and his chase with Mary is perhaps the most riled he gets in the episode.

“I like that moment too because you know anybody who’s anybody who has killed that many people, you know that there’s some serious rage and darkness underneath,” Morf says. “For a lot of that episode, he’s a pretty cool cucumber. And it’s nice to see some of that boil up.”

This episode made a point of introducing one of Zsasz’s traditional allies, Black Mask. While the two never interacted, that certainly hasn’t been ruled out.

“I hope that that happens in the future. But, I don’t know, I can’t. That’s something that I actually like, I don’t have that much information about yet so I can’t say too much about it but that would be really fun.”

While Ryan had a satisfying victory over Zsasz, we didn’t see what happened to him afterwards. Does that mean he’ll be back for more fashion tips and lesbian drama with a side of murder?

“The thing about Victor is, I think you never, I would never count him out. You know he’s, he’s a survivor, and you never know when he’s going to pop up.”