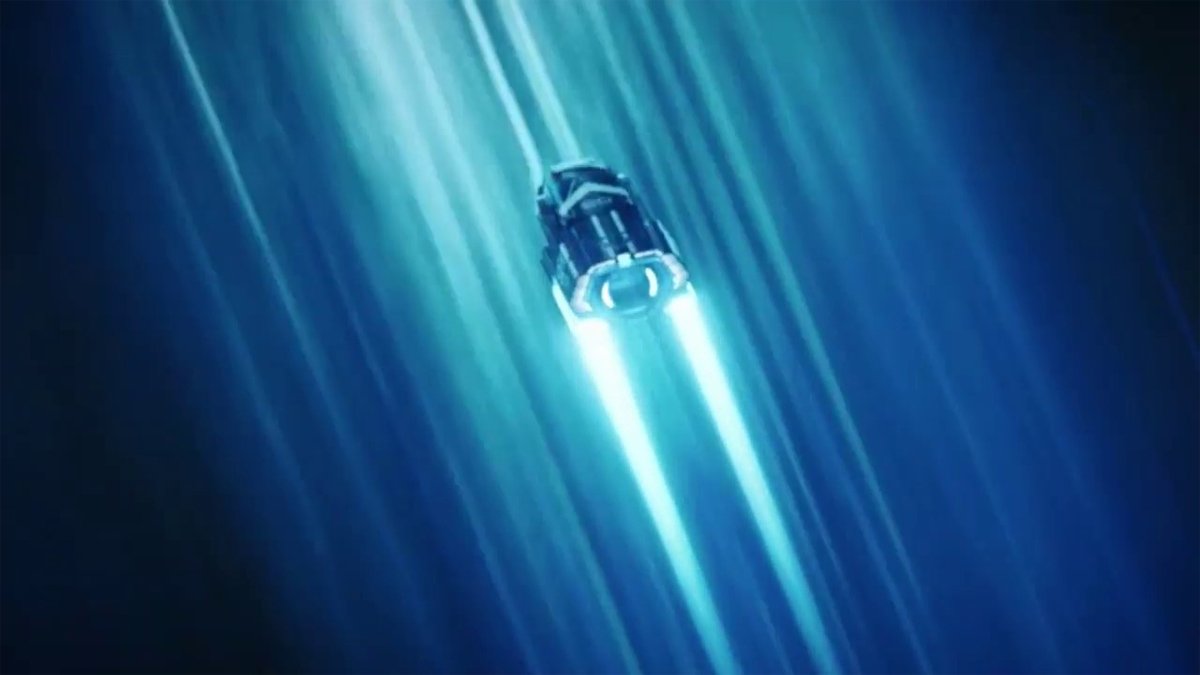 Last week saw the launch of an enormous resource for science fiction fans, the Historical Dictionary of Science Fiction by lexicographer Jesse Sheidlower. The site includes 1,800 entries going back to the dawn of the 20th century, the dictionary contains not only definitions but also earliest known uses, biographical information about the writers, and over 1,600 scans of the original pages where these words first appeared.

It’s a fascinating time-suck of a website which brings some real revelations about the history of everyday science fiction phrases such as ray gun, transmat, flying saucer, and droid (not Star Wars as it happens).

One factoid a number of people have flagged in the dictionary is the revelation that the phrase “Warp Drive” didn’t actually originate with Star Trek, but was first used in a story called ‘The Flight of the Starling’ in Amazing Stories in 1948.

In the Star Trek universe, Warp Drive is the favoured method of faster-than-light propulsion by basically every interstellar civilisation you’re likely to meet. The engine “warps” space around the ship, compressing it ahead of the vehicle and expanding it behind, so that while the ship itself doesn’t break the unbreakable light-speed barrier, it can traverse distances far more quickly than light speed would allow.

It’s an idea that bears an uncanny resemblance to a theory by Miguel Alcubierre proposed in 1994 and, while we lack the technology to put the theory into practice (not to mention the so-far-theoretical negative energy necessary for it to work), but is still probably our best shot at visiting other star systems with journey times of months and years rather than decades and centuries. Alcubierre has said that his theory was directly inspired by the phrase “warp drive” being used in Star Trek.

So the question is, did ‘The Flight of the Starling’ anticipate this theory over 40 years ahead of its time, and 18 years ahead of the Starship Enterprise? Or did it simply use a cool-sounding word that happened to be relevant to a theory someone would come up with decades later?

Fortunately, the Historical Dictionary of Science Fiction not only gives us the name and publication date of the story, but a link to scanned pages of the magazine as a whole, so you can read the story for yourself.

We’ve done just that, and while we’re sorry to report that no, it’s not almost 50  years ahead of its time, the reasons for that are far more interesting than a straight-forward ‘People in the past don’t science good’. Spoilers ahead.

The Flight of the Starling

“The atomic engines of ordinary space vessels attained only a small fraction of the inconceivable velocity which Alward claimed for the warp-drive of the Starling.”

There it is. As far as we know, the first sentence to ever describe a “warp-drive” as a propulsion system for a spacecraft.

‘The Flight of the Starling’ is the story of two test pilots trying out this new warp drive, which allows ships to travel close to the speed of light and finally open the door to interstellar travel.

The plot is straight forward – the Starling is launched on its first test-flight, they use the warp drive to accelerate to speeds close to the speed of light, then return to Earth to discover thousands of years have passed in their absence. They land, team up with some future humans, raid a supercomputer defended by some less friendly “degenerate” future humans, and discover how to put their spaceship into “negative space” so they travel back in time again. Oh and there’s a subplot where the nerdy scientist narrator and nasty bully jock space pilot are vying for the affections of the genius professor’s shy-yet-pretty niece.

It’s an adventure story with a Planet of the Apes–esque twist, and extremely of its time. The really meaty bit of the story comes here:

“Driven by atomic energy, the generators created a force as the generators of the past created electricity. In some respects the force was electricity, but it was of a higher energy order, containing inherent magnetic properties in a complete union of a kind only vaguely suggested by the term “electro-magnetic,” in which the two forces involved are more or less mutually exclusive, the one giving rise to the other. The force created in the immediate vicinity of the ship a warp in space — a moving warp, which could with fair accuracy be called a ripple in the fabric of space. The ship rode this moving warp or ripple as a surf board rides the moving crest of a wave. The intensity of the force controlled the speed of the warp up to a certain limit.”

So we have, from the off, the idea of propelling the ships through a “warp in space”, created here by powerful electromagnetism.

Professor Geraint F. Lewis is a Professor of Astrophysics at the Sydney Institute for Astronomy. Among the subjects he’s researched is a paper demonstrating that an Alcubierre-style warp drive would scoop up all the particles between its starting point and destination, then release them at enormous speed on arrival, with serious Death Star-like consequences. At our request, he’s also given ‘The Flight of the Starling’ a read.

“The notion of warping space to achieve high speeds is ahead of its time, but the details of what we know of (at least the theory) of warp drives is that electricity and magnetism aren’t going to provide the right kind of warping for travel,” Lewis tells us. “You need negative energy, the same kind of stuff as dark energy, but we have no way of knowing if we could ever mould such stuff into material that would power the warp drive.”

If we’re honest, it’s no great shock that a story written in the late 1940s isn’t 100% up to date with current theoretical physics, but ‘The Flight of the Starling’ is a story that gets things wrong in some really interesting ways.

First, let’s take a look at how the story describes the flight itself. Early on the narrator tells us:

“It would not be an easy flight, since for the greater part of the time Burdeen and I would be subjected to terrific pressures, which our special cushioning seats, with their tremendously powerfully absorbing springs, would alleviate but not entirely nullify.”

Later on, during the actual flight, he describes:

“The giant’s hand of acceleration was pushing me deep into the immensely thick padding of my chair.”

That “giant hand of acceleration” could have easily been a description from any astronaut that had experienced a take-off by rocket.

Compare it, for example, with this description by Mike Massimino, an engineer who took part in a space mission to repair the Hubble telescope: “You get up to three g’s for about two and a half minutes at the end and you feel like you weigh three times your body weight. It’s like you have a pile of bricks on your chest.”

The description is eerily similar considering ‘Starling’ was written thirteen years before a human would be launched into space. It’s also wrong.

As Professor Lewis points out, warp drives like the Alcubierre drive are inertialess.

“So no being pressed back into your seat,” Lewis tells us. “Motion of space is not bound to the same rules as motion in space.”

That catch, that the motion of space is not bound to the same rules as motion in space, are what actually break the story, from a science point of view. The central twist in the story comes when the astronauts realise why they’ve returned to Earth so many centuries after they left.

“I think I have the answer to that which puzzles you. It involves an ancient theory — the theory of relativity. The man to whom it is credited is no longer known.”

I straightened on the bench, electrified, a name ringing in my mind. The name was Einstein. It was all suddenly very clear to me. I knew what Julon was going to say even as he said it.”

Let’s just skip over the question of how a pair of physicists building an engine that works on the principle of warping spacetime managed to forget to take Einstein into account. Because the fact is, according to the Alcubierre model, they are right to do so. The warp drive doesn’t just mean no inertia.

“The other thing, that would ruin the story, is that warp drives have no time dilation, so when they get back to Earth after their first journey, the same time would have passed on the ship and home,” Lewis tells us.

In fact, virtually every inaccuracy in the story disappears if you replace “warp drive” with “just a really powerful rocket”. In fact, the biggest difference between the Starling’s warp drive and that of Alcubierre and the Enterprise is that the Starling can’t break the speed of light. Time and time again in the story it points out that the warp drive will allow the ship to travel close to the speed of light, but that nothing can surpass it.

In actual fact, a ship travelling within an Alcubierre bubble doesn’t really move at all – the space moves around it, doing away with most of the effects of relativity at extreme speeds.

Lewis points out, “You can actually ‘break’ the speed of light in a warp drive by sufficiently distorting space enough.”

It would in effect, be far more like the travelling-at-the-speed-of-plot starships we see flying around the Federation than the more mundane relativistic travel of the Starling.

“But given the book was written almost half a century before Alcubierre wrote his paper, it’s a good attempt,” says Lewis.

Before we wrap up, we just want to draw attention to one more interesting mistake the story makes, when it introduces some portable anti-gravity devices. The story reads:

“Slowly we floated down through increasing darkness, amid a silence so deep it was uncanny, the flying devices bearing us as easily as feathers. They functioned on a principle somewhat similar to that of the Starling, save that they warped gravity instead of space.”

Gravity, as Einstein tells us, is the effect of the curvature of spacetime around objects of mass. “Warping gravity” and “warping space” are the same thing.