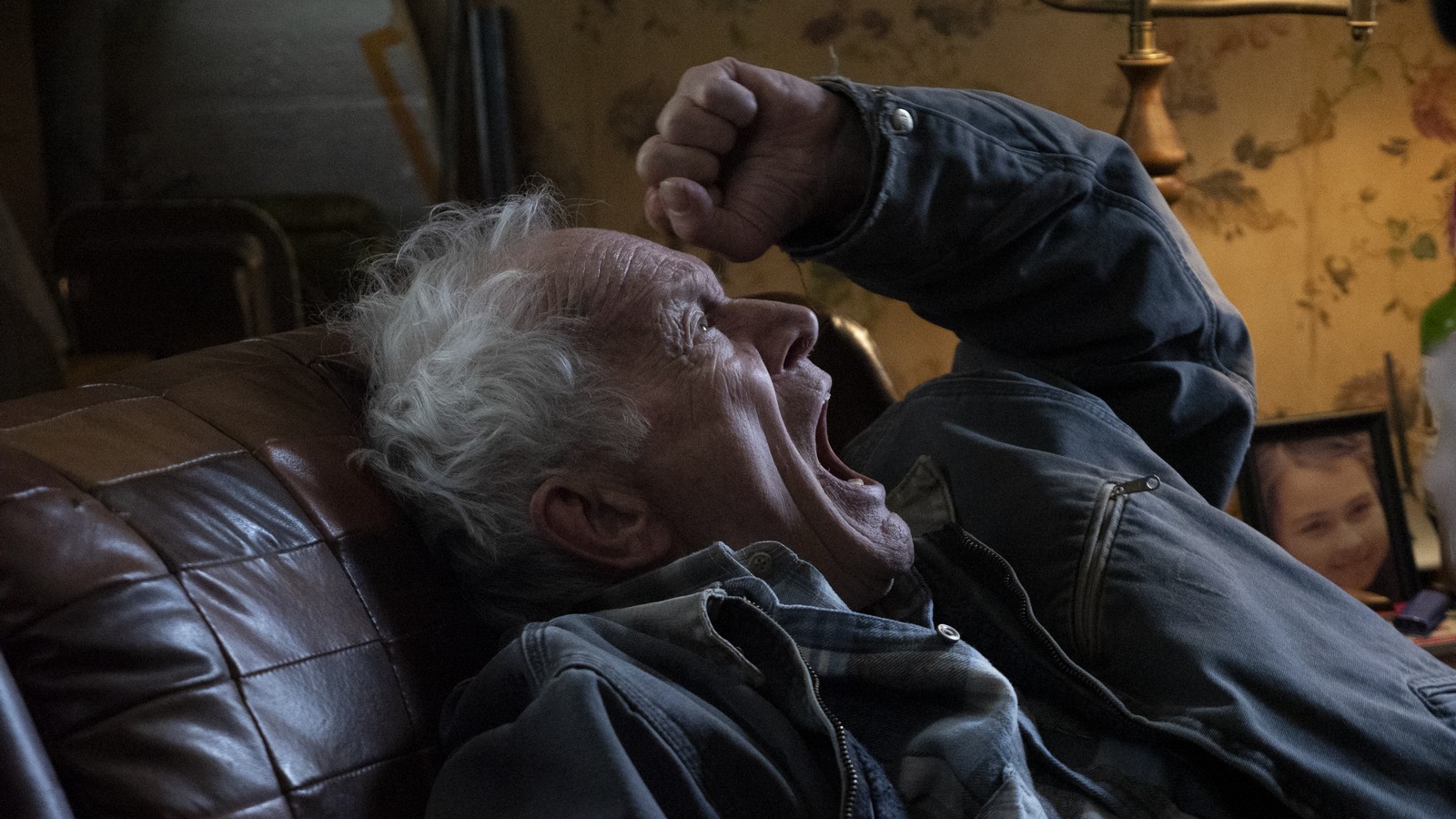 Lance Henriksen has been one of the screen’s most distinctive character actors and overall badasses for going on 50 years. A genuine working actor who always seems to be showing up in a film or TV show, the New York-born Henriksen’s early film career featured small roles in some of the most iconic films of the 1970s, including Dog Day Afternoon, Network and Close Encounters of the Third Kind. Even though his long and varied run on the big and small screen was just getting underway, he managed to work with directors like Sidney Lumet and Steven Spielberg.

He also didn’t have a clue at the time that those films would endure decades later as classics of their era.

“I had no idea,” he says while speaking to us on the phone about his latest film, Falling. “I was just grateful to have a job and do my best and try. It was a gift. Every job I’ve ever gotten, I feel it was a gift. I don’t make any bones about that. It’s just a lot of luck.”

Now at the age of 80, Henriksen is a statesman of cinema in Falling, Viggo Mortensen’s directorial debut. However, the older actor wasn’t always sure luck was going to come his come his way. His father was a merchant sailor who was away at sea most of the time. His mother, who worked as a dance instructor, a model, and a waitress, divorced Henriksen’s father when her son was just two and struggled to raise both Lance and his brother on her own. Stints in foster care and abuse at the hands of other family members followed, with Henriksen out of school after first grade and out of his home for good at 12. He didn’t learn to read until he was nearly 30 years old.

It was around that time that he began working in theater, first in set design and then eventually on the sets themselves as an actor. His first film appearance came in 1972, in the long-forgotten It Ain’t Easy for director (and future Star Trek: The Next Generation producer/writer) Maurice Hurley. Three years later, he was an FBI agent in Lumet’s Dog Day Afternoon, which got him a call from Spielberg, the red-hot young director of Jaws who was then prepping his alien contact epic, Close Encounters of the Third Kind.

In that film, Henriksen played one of the many scientists and technicians on hand for the arrival of the alien mothership and its crew.

“[Spielberg] was getting ready to shoot the mothership leaving, with all the little creatures and all the astronauts going up onto the machine,” the actor recalls now. “And I ran over and said, ‘Hey, listen, Steven, I’ve got an idea. What if I take my coat, throw it over one of these little creatures, and run into the Porta-Potties with it, so we’ve got proof, because this thing’s going to take off and disappear.’ And he looked at me and goes, ‘Lance, listen to me, that’s a different movie.’”

Following that mid-1970s run, which also included the 1978 horror sequel, Damien: Omen II, and the truly bonkers sci-fi cult film The Visitor, with John Huston and Glenn Ford, Henriksen wouldn’t see his next big break until 1982. That’s when a first-time director named James Cameron cast him in Piranha 2: The Spawning, which Cameron was shooting for exploitation producer Ovidio G. Assonitis.

“I like Jim,” says Henriksen of the man who would later go on to make game-changing, record-breaking blockbusters like Titanic and Avatar. “I met him on Piranha 2. Neither one of us liked that movie, but we did it. We had to do that movie. We weren’t supported very much by the producers…And then when the movie was done, we all went home and I remember they fired Jim the last day of shooting so that they could edit and control the movie.”

According to Henriksen, the producers of Piranha 2 took the film out of Cameron’s hands and presented their own edit to distributor Columbia Pictures, which rejected it.

Says Henriksen, “Jim took the same footage that they showed Columbia. He re-edited it and brought it back to [the studio]. And that’s the cut that released. It’s a great story. I hope it’s true.”

Cameron cast Henriksen in his next two movies, both of which turned into sci-fi/action classics: 1984’s The Terminator and 1986’s Aliens. It was in the latter film that Henriksen created the first of several iconic performances by playing the enigmatic and ultimately heroic android Bishop. Other 1980s standouts for Henriksen included Prince of the City, The Right Stuff, and Jagged Edge, while the latter half of that decade yielded lead roles in two horror cult classics, Pumpkinhead and Near Dark.

Although Henriksen continued to work steadily in movies throughout the 1990s, 2000s and 2010s, it was a TV show that yielded perhaps his most famous character after Bishop: ex-FBI profiler and serial killer hunter Frank Black in creator Chris Carter’s nightmarish thriller series Millennium. The series was Carter’s follow-up to The X-Files and it ran for three seasons and 67 episodes on Fox from 1996 to 1999.

“I think the thing that I admired the most was when I was offered the role, I didn’t right away know it was television,” says Henriksen, who also admits that the show’s oppressive nature and the tormented psyche of his character wore on him during its three-year run. “I got to a restaurant with Chris Carter and the director. I said, ‘Let me ask you something. This is so dark. A lot of serial killers. A lot of bad people. Where’s the light going to come from?’ And all Chris Carter said to me was, ‘The yellow house.’ And then I got it right away. It was about [Black’s] family and I agreed to do it.”

Henriksen adds, “Occasionally it sucked me in,” referring to Millennium’s relentlessly grim atmosphere. “But it was a tough show. It wasn’t an easy one. It was also kind of a groundbreaker at the time, I think.” Henriksen has been quoted as saying that it took him “a year” to get out of the head of Frank Black after the show was cancelled, and has often noted that he finds it difficult to detach himself from a character after the project has finished shooting.

When it came to Falling, Henriksen says he was actually leery at first of playing Willis Peterson, the conservative and homophobic father of a middle-aged gay man named John (Mortensen, who also wrote and scored the movie). Nearing the end of his life, perpetually angry and having pushed two wives and his children away from him, Willis is perhaps the most complex role of Henriksen’s career but one which he says was exhausting to play.

“I have to tell you the minute we were wrapped and we finished the movie, I said, ‘Viggo, I’m going to disappear for a while. I got to get myself back,’” Henriksen explains. “I was a little afraid to do it. I got so deep into some of it that I got a little afraid that I’m going to get a form of Alzheimer’s of some kind–I won’t be able to shake it. But I was able to shake it. But anyway, it was intense. It really was, the stakes were very high. And we had a short time to do it. We shot it in five weeks.”

Henriksen’s relationship with Mortensen–best known to genre fans as Aragorn in The Lord of the Rings–stretches back to the 2008 Western Appaloosa, in which both men starred alongside Ed Harris. “We both love Westerns and we all enjoyed it,” says Henriksen of his first collaboration with Mortensen. “All three of us: Ed loves Westerns. He knows how to ride, he knows how to do it. It was nice to meet Viggo. He’s as good a guy as I’ve ever met. I liked him right away, really good guy.”

Nevertheless, Henriksen–a graduate of the Actors Studio and a practitioner of method acting–still wasn’t sure he wanted to play Willis when Mortensen sent him the Falling script. “It scared me,” he admits. “He said, ‘Would you do it?’ I said, ‘Sure, I’m scared, but I’ll do it.’ And then we lost the original backing and it took two years to finally get new backing, and he said, ‘You still want to do it?’ And I went, ‘Yeah.’ And he goes, ‘That didn’t sound very enthusiastic, Lance.’ I said to him, ‘The truth is, I’m going to have to visit some real dark places from my youth, my childhood, all of that, and I’m nervous.’”

In Falling, John brings Willis home to Los Angeles with him to stay with his family, including husband Eric (Terry Chen) and their adopted daughter Monica (Gabby Velis) while they look for a new home for Willis closer to John and his sister Sarah (Laura Linney). But Willis is resolutely against leaving his rural farm in heartland America, determined to stick to his sheltered lifestyle even as the onset of dementia begins to blur the past and the present in his mind.

Despite his anxiety about delving into Willis’ tortured, embittered psyche, Henriksen now imparts that participating in the film became an instant highlight of his career. “It was the best experience I’ve ever had as an actor,” he says. “The support to do it and [Mortensen’s] appreciation level and all of those things were everything that I hoped for… I have nothing but gratitude. This is maybe the best role I’ve gotten in my lifetime. I really think that.”

Those are strong words coming from an actor who has appeared in many of the definitive films of the last five decades, but Falling may well feature some of the most emotionally raw work he’s done during his lifetime in the business. “I’m grateful to be an actor,” Lance Henriksen says with sincerity. “I’m an apprentice to every new subject. It’s been my education. I’m a lucky guy, I really am.”

Falling is out in theaters, on digital, and on demand now.