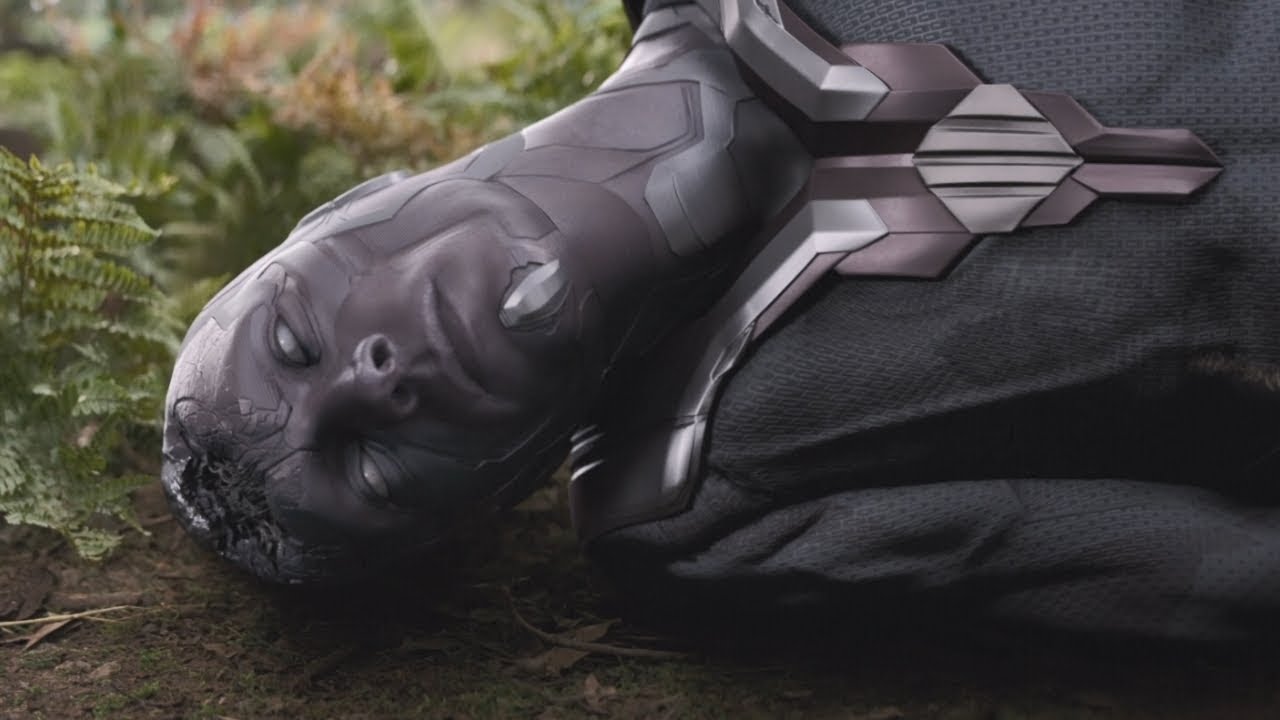 The Marvel Cinematic Universe isn’t particularly well-known for its jump scares. Though the studio’s suite of 23 films have adeptly blended genres at times, at the end of the day these are all still PG-13 action movies…not horror.

That all changed last week, however, when the studio’s first official television effort, WandaVision decided to spring a dead body on an unsuspecting audience. For one brief moment, Wanda Maximoff loses focus in maintaining her fabricated sitcom world. In that moment, the false image of her colorful android husband falls away and reveals the uncomfortable, terrifying truth underneath: The Vision is dead. Gray. Moldering. Empty. Dead.

We knew this already, of course, given the events of Avengers: Infinity War when Thanos ripped the life-giving Mind Stone from Vision’s head. We know what a dead Vision looks like – drab, lifeless, with a gaping mechanical hole where a brain once was. When we see his lifeless form in WandaVision though it’s somehow even more terrifying than before. For starters, the show springs it on us when we least expect it. But on an even deeper level than that, it is truly discomfiting to experience the contrast between the vibrant sitcom world in which he’s alive and the ashen real one in which he is very much not.

At least viewers could comfort themselves with the possibility that Vision’s dead body was merely another figment of Wanda’s imagination. It’s not like a Disney+ TV show would allow its heroine to become a grave robber and haul the corpse of her lover around like a grotesque marionette doll. Well about that…this week’s episode 5 reveals that that’s exactly what Wanda did. Despite The Vision’s living will stating he does not want to be reanimated, Wanda breaks into a SWORD facility and steals his mechanical bones.

Nothing ever truly ends in the world of comics. And even the most steadfast rules about whose death “sticks” are made to be broken (paging Bucky Barnes). It’s very much the same in the MCU as well (paging Bucky Barnes once again…and Loki and Gamora and Groot). Not even The Vision’s death from Infinity War took, as here he is reanimated once again.

Still, there’s something about the terrifying starkness of Vision’s true dead form that makes this all feel different. With this week’s reveal, and the events of the episode itself, Marvel has revealed that it’s ready to change its perspective on death. WandaVision is about a lot of things: sitcoms, trauma, Kathryn Hahn’s leg-warmers. What the show might be trying to communicate most powerfully, however, is just how difficult it is to accept the finality of death.

“On a Very Special Episode…” is very much WandaVision’s own very special episode. So much of what occurs within these 41 minutes (well, 36 before its typically hilariously long closing credits) revolve around the concept of death and Wanda’s inability to process it. The “A” plot deals with Wanda and Vision’s kids, Tommy and Billy, growing up to age 10 so that they are allowed to keep and raise their dog named Sparky.

Unfortunately, Wanda becomes distracted with her fight against SWORD and Sparky runs off into Agnes’s azalea bushes where he eats the toxic leaves and dies. Agnes is understandably upset and she wraps up little Sparky’s body before the kids can find it. When Billy and Tommy begin to cry, Wanda grabs their shoulders and tells them not to “age up” like they’ve done before.

“The urge to run from this feeling is powerful,” Wanda says.

And if anyone would know about running from the powerful feeling of grief, it’s Wanda Maximoff. Save for a brief time on the run on a globe-spanning adventure with Vision, Wanda’s entire existence in the MCU has been one of pain. Her story begins with her parents being blown up in front of her and then doesn’t get any cheerier from there.

Wanda watches her brother Pietro die in Sokovia. She then joins the Avengers only to accidentally kill dozens of people in Lagos while saving Steve Rogers. She joins the fight against Thanos and ends up having to kill Vision herself…before Thanos cruelly rewinds time just so he can kill him again in front of her.

Through all of these experiences, through all this death, the pain has just mounted and mounted and mounted. It’s no wonder that Wanda has done something as extreme as created her own sitcom world and bewitched a whole New Jersey town to go along with it. But this moment with Sparky is the first time we’re aware that she’s fully aware of her own pain amid all the death she’s experienced. And make no mistake: it’s all about death.

“It’s too sad. You can fix anything mom. Fix the dead,” Wanda’s children implore of her.

Billy and Tommy are likely a creation of Wanda’s own subconscious. This is her own subconscious  asking her…imploring her to fix the one thing she knows damn well she can’t fix.

“We can’t reverse death, no matter how sad it makes us. Some things are forever,” Wanda says.

And yet…Wanda has reversed death in her own little way. She’s hauling around the corpse of her lover and psychically jangling him around like a fish on a hook. At episode’s end, she brings another one of her loved ones back when Pietro (“recast” as Days of Future Past’s Evan Peters) knocks on the door of their home and launches right into a “cool uncle” routine. This entire sitcom endeavor from Wanda is all about doing the impossible: reverse death.

Adults are supposed to know better. They’re supposed to grow up and understand that death is a natural, if unfortunate part of life. For as another magic user once said “Do not pity the dead, Harry. Pity the living, and, above all those who live without love.” Wanda’s own fake children even respond to death with something that could be considered a comforting platitude to the rightly organized mind: “Family is forever.” Family is indeed forever. Family and legacy are what’s supposed to matter. That’s a nice thought but it ultimately means nothing to Wanda when up against the image of Vision and his pitiless, dead eyes.

As mentioned before, death is a constant companion in the Marvel Universe – so much so that the embodiment of Death was the object of comic Thanos’s infatuation, and his original motivation for deleting half the life in the universe. But Death as a personification or a character only muddles the real life pain it can leave in its shadowy wake. Death isn’t a lover, a reaper, or a companion. It’s death. It’s the end.

There is undoubtedly still time for Wanda to come to terms with the stark finality of it all. As this episode reveals, SWORD Agent Monica Rambeau is intent on helping her out, having recently experienced a death in the family as well. But Maria Rambeau is currently in the ground with a lovely headstone and some blooming flowers atop her. The images of death in Wanda’s world insist upon sticking around. There is no healing when you’re surrounded by corpses.

That’s a big lesson for Wanda and the MCU to take in. Thankfully it’s one they seem intent on learning.