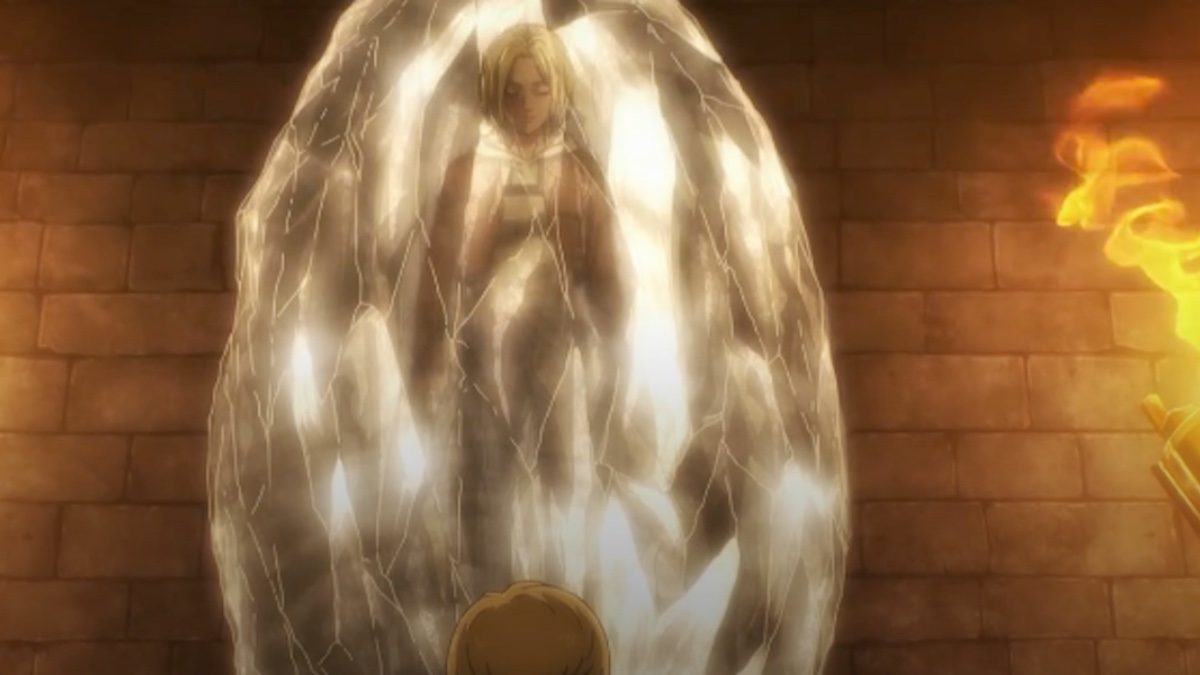 Attack on Titan’s final season has expertly played with the viewers’ expectations, but “Brave Volunteers” feels like the most atypical episode of what’s been an extremely unpredictable season.

On one level, an episode that’s largely set in the past and is almost entirely designed as an expository device shouldn’t be a very satisfying installment of Attack on Titan. The anime has done episodes like this before, but it actually feels appropriate for it to pump its breaks a little and take stock of everything that’s happened so far now that the season has passed the halfway point.

This may technically be one of the “least best” episodes of this season, but it still works a lot better than something like this should. “Brave Volunteers” shows confidence build up in multiple characters as they become optimistic about the future, but in reality this episode is a study about just how much these characters don’t know, which is a stark realization that goes double for the audience.

The final moments of Attack on Titan’s previous installment set up so many jarring twists and altered relationship dynamics. The audience is confused, much like Falco and Gabi are when they see Zeke working alongside the Eldians. It’s a major indication that the entire first half of this season has been a much more complicated plan than what’s initially been indicated and “Brave Volunteers” finally provides some helpful answers before the series takes another major turn towards its apocalyptic endgame.

Some people may lament how much of “Brave Volunteers” is spent looking back at the past. However, this choice is excusable because it narratively works much better than if this material played out in chronological order at the start of the season and the audience were clued in to Eren’s plan. The season is stronger by essentially making the audience an unofficial Marleyan. “Brave Volunteers” is full of answers, but it still feels like there’s a lot to this plan that’s being kept in the dark to everyone.

The crux of “Brave Volunteers” comes down to Eldia’s invasion of Paradis Island and the unlikely arrangement that they enter with Zeke and a determined soldier named Yelena. A tense parley takes place between these factions and the Eldian and Marleyans reluctantly decide to pool their resources together to take on the larger threat of Paradis and the Founding Titan. There’s a lot to digest as Attack on Titan breezes through its plan and there are some enlightening glimpses into strategy, like how Eren wants Armin to tap into Bertholdt’s memories as a way to learn of their enemy’s plan and gain the advantage over them. Everyone is still planning multiple moves ahead in this metaphorical match of monster chess.

The secret alliances between Zeke, Levi, Eren, and Yelena are major turning points, but the biggest twist in “Brave Volunteers” is reserved for its ending. It turns out that Armin’s captive audience through this engrossing story is none other than Annie Leonhart, which is a major revelation that throws more significant players into the final chapter of this war.

The flashback nature of “Brave Volunteers” thankfully gives the audience a little more time with Sasha. It’s very fulfilling to see her in her element again, but it also makes every moment with Sasha incredibly bittersweet considering where things end. Her funeral is a rough scene, but it’s also an important moment for everyone to catch their breath after moving non-stop for so many episodes and not allowing themselves the opportunity to grieve. The pain of Niccolo, a completely new character, is proof of how much Sasha made a difference to those around her. At least she got to taste lobster before she went out.

A lot of this episode is constructed around characters slowly letting down their guards to strangers, whether it’s intentional or otherwise. The twisted “welcome wagon” skit that Hange engages in with the soldiers on Paradis Island is treated like an affable icebreaker as these characters broach new territory. However, from the point of view of these strangers it’s a gesture that paralyzes them in fear; not unlike the way a soldier may tease a prisoner of war or how a predator plays with their food before consumption.

It’s another jarring reminder that this is a milestone event that’s depicted for the Eldian Warriors, but it’s also a momentous occasion for the people on the other side of this attack, yet for completely different and more harrowing reasons. Every episode from this season contains playful actions that are intentionally meant to be double-sided depending on from which side of this war they’re being considered.

The most dangerous example of this is present with Yelena, a ruthless and obsessed figure that’s determined for Eren to recognize his greatness. In the present it seems very likely that Eren has developed a God complex where he believes that everything that he does is justified and the necessary means to an end. Those kinds of feelings don’t just develop on their own and it wouldn’t be surprising if Yelena is the one that continually bolsters up Eren’s ego to the point that he’s beyond viewing himself as anything other than perfect. It’s a dangerous echo chamber of delusion for Eren. There’s already a very palpable sense of tension that accompanies everything that Yelena does.

Yelena proves that she’s already willing to kill for Eren, but it’s enlightening to hear her explain her reverence towards seeing Zeke’s Beast Titan for the first time. She reveres the monster as a God. Yelena displays a fascinating perspective towards Titans that hasn’t been examined in the past, but makes so much sense in regards to how lost and disillusioned individuals will sometimes praise weapons of destruction.

Yelena’s devotion to Eren also allows “Brave Volunteers” to dig deeper into where Eren’s head  is currently at and how much of his humanity he’s lost in the three years building up to the attack on Marley. They’re brief moments, but Eren appears to be getting numb towards death as he focuses more on the good that he’ll cause once all of this is over. He’s consumed over how the world views him and his kind as devils and he’s determined to either prove them right, or completely wipe them out so that there’s no one left to harbor these disparaging thoughts.

These concerns over Eren grow greater while he innocently trains alongside Armin and Mikasa. It’s comforting to see these three together, but there’s an unspoken animosity that’s formed. Even Armin laments how he feels like he has no idea who Eren is anymore. It’s seriously chilling when Eren calmly talks about his Rumbling plan while he fires off rounds at the range. He’s completely hollow in the moment and Armin and Mikasa can sense it.

Some powerful words that come out of Eren in this episode is how, “We can’t win if we don’t fight.” This philosophy may be true on some level, but what’s ultimately important is who is fighting whom, and over what. Eren’s bleak message radically contradicts what Willy Tybur preached during his final moments at the Liberio Festival: the only way that this war can be won and that peace can be achieved is if everyone works together. Eren has used his power to work together and build an army that intimidates the world into submission. He manages to take Tybur’s speech and weaponize it in a way that only further proves his point.

Attack on Titan’s future is definitely going to feature more individuals working together, but it seems like it will be under duress and through Eren’s increasingly tyrannical rule rather than a mutual appreciation to fix the world. Oddly, it’s Onyankopon’s words that “Everybody exists because somebody wanted us to exist” that are unintentionally profound and speak to how everyone should be looking for ways to come together to do more good, not evil.

“Brave Volunteers” is a dense and necessary episode that leaves Attack on Titan in an exciting position as serious dissent begins to crop up around Eren. However, now everyone is too deep into this plan to abandon ship. It leaves the Eldians in rewarding territory and even though they now have more power than ever before there are much more fundamental problems that begin to arise.

Eren is increasingly comfortable to embrace the devil role that the world has been all too eager to label them with rather than fight the narrative and prove that the only monsters here are the antiquated rules that the public has clung to in fear. The opening credits have been telling the audience since the very first episode of this season: You are the real enemy.