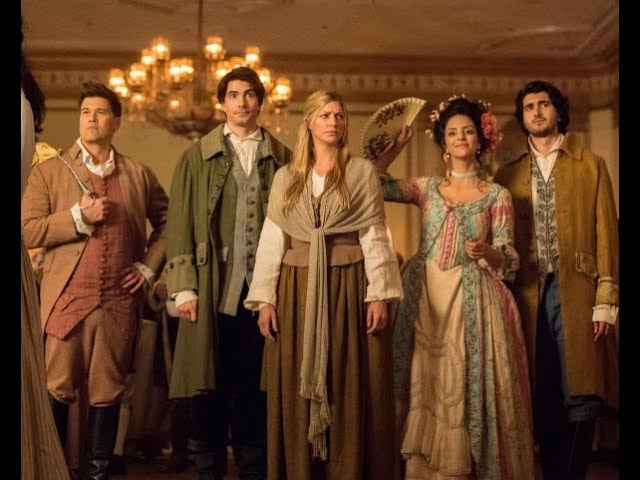 AfterBuzz
Share on Facebook
Share on Twitter
Share on Pinterest
Share on LinkedIn
While Sara is in Star City, Ava is in charge and trying to be the cool leader.  They head back to 1 France to deal with the encore of Marie Antionette who uses perfume to charm everyone around her to party until they die.   The Legends successfully extract her head and body and bring her above the Waverider. Zari goes against Ava’s orders to look at her future and finds out that in just a couple years her perfume will ruin people’s sense of smell and cost her all her followers.  She takes Marie’s perfume to use for herself at her perfume launch. When it accidentally gets spilled on the red carpet everyone becomes infatuated by Zari and chase after her. While Mick and Ray deal with a headless Marie, Ava, Behrad and Nate rescue Zari with a well timed plunge in a fountain to get rid of the perfume.

Meanwhile Constantine and Charlie deal with the ghost of Astra’s mother, Natalie and the truth about their relationship.  John was in love with Natalie but chose love over magic. When Natalie was killed by a drunk driver John tried to bring her back but the demon he was bargaining with took Astra in exchange for Natalie’s return.  Natalie tells John about the Loom of Fate and why Charlie was at John’s house. Charlie found the Loom and destroyed it and scattered the pieces across the multiverse. However, now she feels her past catching up with her Post Crisis.

Zari with her social status ruined by the fountain plunge eats a donut and recalls more of the old timeline.

Astra tries to change John’s future by moving his death by lung cancer up by 10 years to now.  And gets it done in exchange for a favor in hell. The episode ends with John dying in front of Charlie and Gary.