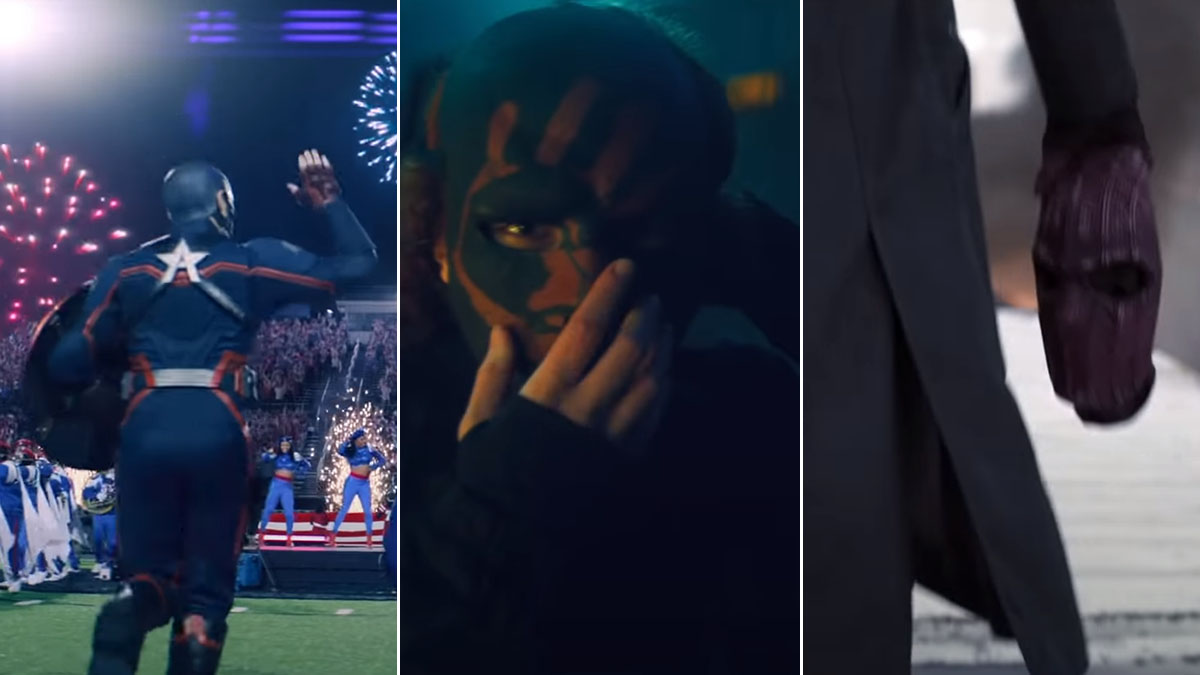 This article contains speculation that could lead to spoilers for The Falcon and the Winter Soldier and the wider MCU.

The Falcon and the Winter Soldier dropped a new trailer during the Super Bowl with some tantalizing new hints at the world Sam and Bucky are fighting in. And while we still don’t have a total grasp of the full scope of the story or what our heroes are up against in this post-Captain America world, we got glimpses of new characters, a new (possible) hate group, and a good look at a classic villain’s iconic ski mask.

But who the hell are all these people? Well, we know some for sure, and we have some interesting ideas on the others.

Here’s that trailer if you haven’t seen it yet.

Now, let’s break down who The Falcon and The Winter Soldier villains might be…

Daniel Bruhl is returning to the role he played in Captain America: Civil War for this TV series, and he’s finally getting a little more color than his bland, generic military bad guy look from that movie. He’s playing Helmut Zemo, the former Sokovian special forces soldier with a grudge against the Avengers growing from his family’s death during the battle with Ultron. You’ll remember that in Civil War, he tried to frame Bucky for T’Chaka’s death and tried to rip the Avengers apart from the inside by revealing Bucky’s role in the death of Tony Stark’s parents.

In the comics, Zemo is a top tier Captain America villain. There, Helmut is the latest in a long line of European aristocrats, and super duper racist. Helmut’s father, Heinrich, died in battle with Captain America, and Helmut blamed Cap (it was really Heinrich’s incompetence that got him killed, but Helmut’s an aristocrat, nothing’s ever their fault). So the latest Zemo sought his revenge.

He has worked with just about every villain in the Marvel Universe over his career, either through allying with them, through shared service in the Masters of Evil (where Zemo masterminded one of the best Avengers stories of all time, “Under Siege”), or as part of his fake superhero team, the Thunderbolts. Comics Zemo is best recognized by his outfits: as Zemo, a rockin purple ski mask and gold crown; or as Citizen V, a bright purple body suit with American flag shoulder pads, a shiny V shaped mask, and a sword. Bruhl will probably not be hopping in his Citizen V outfit here, but we definitely see the ski mask in the latest trailer.

They’re not the deepest cut, but they’re still a little ridiculous: the Underground Liberated Totally Integrated Mobile Army To Unite Mankind, or U.L.T.I.M.A.T.U.M., makes their first on screen appearance in the trailer. They are the troops throwing on the masks with the painted hand on the face.

In the comics, ULTIMATUM is a terrorist group founded by Cap foil Flag Smasher. They, and their founder, are dedicated to the elimination of all nationalism and national pride around the globe. Cap conceded that Flag Smasher might kind of have a point early in their rivalry, but Smasher was extremely fanatical about his antinationalism and fought Cap regardless. Until he discovered the source of ULTIMATUM’s funding: the Red Skull, through several shell corporations. When he realized this, he teamed up with Cap to foil his own plan and ran off.

It’s fairly easy to see how ULTIMATUM and Flag Smasher might fit into this story – just sub in Zemo for Red Skull and it makes the same kind of sense. Except…

The woman with red hair putting on the ULTIMATUM mask bears a faint resemblance to a pedigreed Marvel villain: Red Skull’s daughter, Sin.

Sinthia Schmidt was born to (and practically discarded by) Johann Schmidt during the war. She was raised by one of Skull’s followers to be every bit as hateful as her father, and she came out even worse. She started her villain career as Mother Superior, a nun themed villain who trained other young girls to be horrific racists. She would later enter into a romantic relationship with Crossbones, the jacked up and very disturbed lead henchman for the Red Skull. And then one time she got a hammer from the Norse god of fear and turned into a 10 foot tall monster, but we don’t really talk about Fear Itself here.

Wyatt Russell is playing John Walker, known to Marvel fans as the U.S. Agent. It’s perhaps a little less likely that Russell is purely a villain in this series, but he does have a complicated history. Notably, when he first came on the scene he was very much a villain, in his guise as the ultra-nationalist Super Patriot. Expect the MCU version of John Walker to give the character plenty of nuance, and don’t be the least bit surprised if he sticks around in some fashion, whether as an anti-hero or something more.