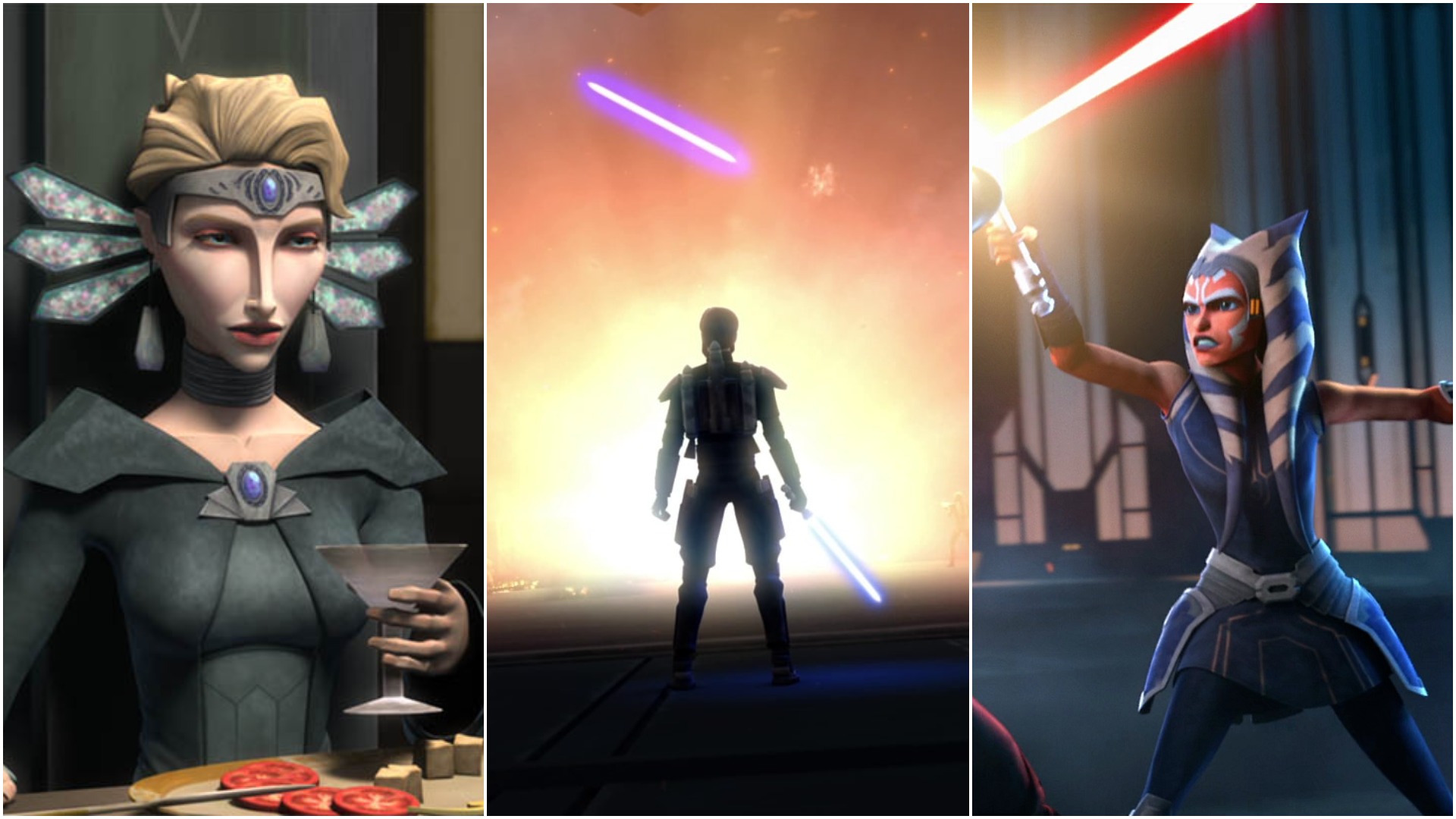 Din Djarin reluctantly found himself thrust in the middle of Mandalorian politics in season two of the hit live-action show. The bounty hunter just wanted to bring Grogu to a Jedi who could teach him to use the Force, but that journey also led him to Bo-Katan Kryze and Boba Fett, two Mandalorians who operate completely outside the strict traditions of Din’s own clan, the Children of the Watch. For the first time in his life, Din’s seeing all the different angles and factions of the society to which he belongs.

If all of the intrigue surrounding Mandalore went over your head while watching the second season, there’s a very easy way to catch up. After all, much of the Mandalorian history teased in season 2 was first detailed in The Clone Wars animated series, and watching just a short selection of episodes provides a lot of context for what’s happening in the live-action series. While The Clone Wars doesn’t explain everything about what we’ve seen in The Mandalorian so far, it does give you Bo-Katan’s backstory, a rundown of Mandalore’s many cultures and factions, a deeper dive into the race’s relationship with the Jedi, and an introduction to the Darksaber.

Here are The Clone Wars episodes and arcs you need watch to get up to speed on Mandalorian history before season 3 of the live-action series (as well as The Book of Boba Fett):

Remember when Bo-Katan called Din Djarin’s clan “Children of the Watch?” What about when Din argued with a Mandalorian named Paz Vizsla in season one episode “The Sin?” Well, the significance of both the clan name and the Vizsla surnname are hinted at, if not fully explained, in the first Mandalore episode of The Clone Wars.

This episode marked a soft reboot for Mandalorian lore even before the pre-Disney Legends timeline was declared non-canon. Far from the armored warriors we were used to at the time, the Mandalorians introduced in this episode are a pacifistic, largely homogeneous society led by Duchess Satine Kryze, Bo-Katan’s sister. Not all Mandalorians are happy with this new status quo, though.

A violent rebel faction called Death Watch seeks to bring back Mandalore’s warlike past. This is the same group that would one day rescue a young Din during the Clone Wars, which explains why Din and his clan follow ancient warrior traditions as opposed to the more modern beliefs of Bo-Katan’s group.

This is largely a bridge between the two other episodes in this arc when it comes to new Mandalore facts, but it does reveal some important elements about the political situation on the planet during the war.

An assassination attempt reveals that Death Watch is in league with both a corrupt Republic senator and the Separatists. Palpatine’s hands are everywhere, even on Mandalore. While that probably is no longer true at the time of The Mandalorian, we do know the wheels of Palpatine’s plans are still spinning between Return of the Jedi and The Force Awakens, including during the time period when the Disney+ series takes place. It’s possible we’ll learn more about what the Imperial remnant wants with an occupied Mandalore in season 3.

This episode also emphasizes how different Satine’s regime is compared to other eras of Mandalorian history, as she’s forced to make hard decisions in order to protect her government’s pacifist ideals. Bo-Katan, Koska Reeves, and Boba Fett are far from the first Mandalorians to fight over what being a Mando actually means.

Death Watch reveals themselves in a big way in this episode. If Din is meant to be a member of a group derived from these guys, the faction has changed a lot over the generations.

In “Duchess of Mandalore,” the political situation on Mandalore gets more complicated as the prime minister worries about public perception of Death Watch. If the Republic comes in to put a stop to the brewing civil war, more Mandalorians could side with Death Watch out of the belief that they’re true countrymen are fighting against the Republic oppressors.

Although she doesn’t appear in this episode, this is the environment in which Bo-Katan formed her beliefs and opinions about how the planet Mandalore should operate and be governed. This moment in Clone Wars history really shapes the character.

Rather notorious for its obscure “poisoned tea” storyline, “Corruption” is nevertheless an important link in the chain of understanding the recent history of Mandalore. Featuring both Satine and Padmé Amidala, the episode is a close look at the price of victory.

Despite the planet’s belligerent past, Mandalore manages to remain neutral in the Republic versus Separatist war, but it still controls a powerful sector valuable to both sides, which makes the planet a big prize for either side. This is one of the reasons the planet is ultimately doomed to fall in the war.

This episode also clearly shows how different Satine’s ideas are from those held by more traditional Mandalorians. When Bo-Katan expresses surprise that Din Djarin won’t take his helmet off in front of others, she is not only comparing him to extremists like Death Watch (who didn’t actually have the strict helmet rules) but to Satine’s efforts to bend the majority toward pacifistic homogeneity.

Another character from The Mandalorian takes the stage: Ahsoka Tano. A continuation of “Corruption,” “The Academy” shows what life is like for children growing up in this era on Mandalore. It also sets the stage for conflict later.

The Jedi are not actually enemies of Satine’s Mandalorians during this time period. The idea of Jedi and Mandalorians as ancient enemies comes from ancient history, but was probably reinforced by the events of the fall of the Republic. As you’ll see by the end of The Clone Wars, the Jedi play a direct role in the Empire’s occupation of Mandalore.

The Jedi at this point in the Clone Wars unknowingly represent a corrupting influence of their own, spreading Republic ideology while Palpatine orchestrates from the shadows. Another political shake-up here further destabilizes Satine’s reign.

Bo-Katan takes the stage at last in her first appearance on the show. In “A Friend in Need,” we see how Death Watch has been slowly growing more powerful and more zealous while Satine and the Republic try to hold the New Mandalorian pacifist culture together.

This episode gives fans a closer look at who Death Watch were and why Bo-Katan chose to work with them to topple her sister’s government. In her attempts to reclaim Mandalore on The Mandalorian, she’s drawing on decades of the planet changing hands, a cycle of violence she helped spark in the first place. At some point, she’ll need to reckon with her past, but first she needs to get the planet back.

Another treat for fans of The Mandalorian: Bo-Katan and Ahsoka meet here, the start of a decades-long history that Din hilariously has no idea about. Bo-Katan matter-of-factly pointing Din to Ahsoka is pretty funny.

You will need some extra context before jumping into one of the most important Mandalorian stories in the Star Wars canon: a resurgent Maul and his brother Savage Opress have taken control of Death Watch, gaining a powerful army with which to execute their plan against the Jedi. During this arc, Maul takes the Darksaber from Pre Vizsla by force, declaring, “I claim this sword and my rightful place as leader” in the kind of violent transfer of power Bo-Katan later believes she needs to evoke to take the Darksaber from Din.

This action-packed arc marks a major turning point in the life of Bo-Katan and Mandalore itself, and you’ll get to see that all the way through in “Eminence,” “Shades of Reason,” and “The Lawless.”

Some of the very best storytelling in The Clone Wars came at the end of the series. By the time she leads a Republic force to free Mandalore from Maul, Ahsoka has left the Jedi Order and the dark events of Revenge of the Sith are happening in the background. “The Night of a Thousand Tears” Moff Gideon witnessed also takes place around this time, although it hasn’t yet been seen on screen.

The Siege of Mandalore arc (“Old Friends Not Forgotten,” “The Phantom Apprentice,” “Shattered” and “Victory and Death”) shows how Maul encourages all-out war on the planet, Bo-Katan switches sides and asks the Jedi for help, and the Republic takes over Mandalore to stop the conflict just as it becomes the Empire.

Along with being some of the best tragedy and pulp fun Star Wars has to offer, this arc both details Order 66’s effect on Mandalore and Ahsoka. It also shows how much of it was orchestrated by Palpatine. The character who drives that home is Maul, who all along knew the Sith were eventually planning to use galactic in-fighting as part of their scheme to rise to power. It’s not surprising that the dark effects of these events are still being felt decades later on The Mandalorian.