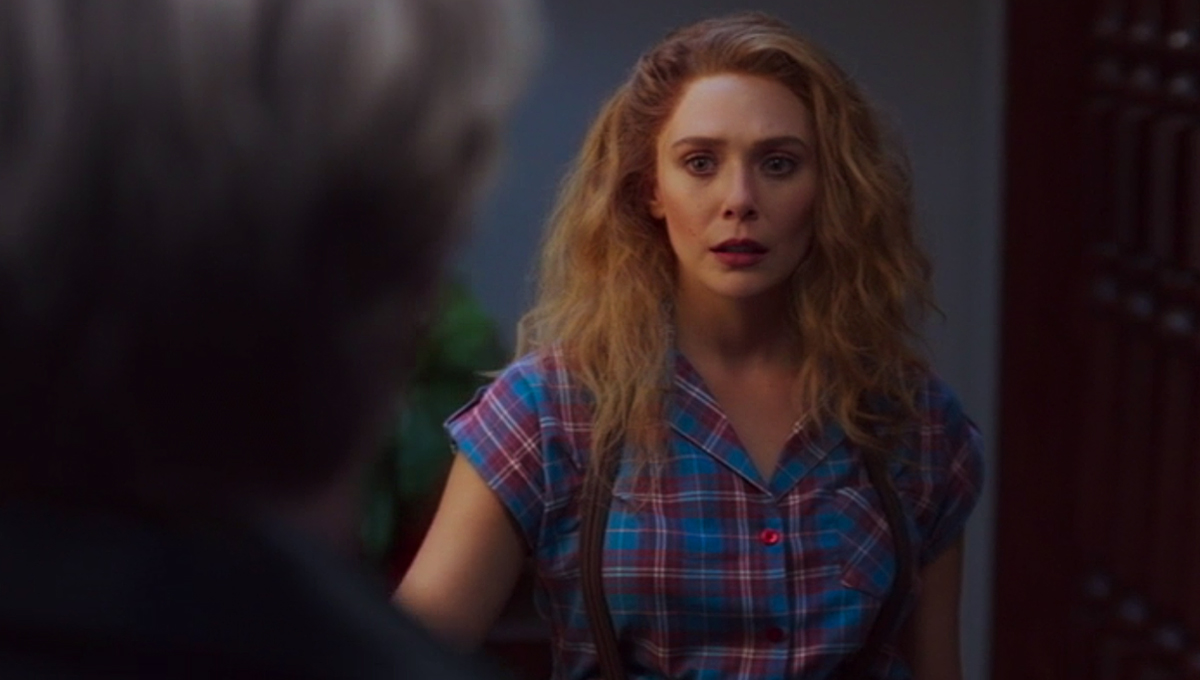 The vexing vicissitudes of WandaVision accomplished what was once unthinkable in the Marvel Cinematic Universe when Wanda’s long-deceased twin brother, Pietro Maximoff a.k.a. Quicksilver, appeared on her pseudo-sitcom doorstep with a franchise-altering twist, since it was Evan Peters’s quirky version of the speedster—from Fox’s X-Men movies—in lieu of the homegrown version played by Aaron Taylor-Johnson. Thusly, with one whooshing streak, the MCU might have installed the missing mutant half of its comic book ties. Yet, the change came with a plot-based explanation passable enough to make one wonder if it canonizes the MCU’s previous casting swaps.

While the implications that could result from Fox-grown X-Men characters getting grandfathered into the Marvel Studios-produced MCU are potent (and Deadpool-prominent), the understated narrative here is that the scene in question from WandaVision Episode 5, “On a Very Special Episode,” provided a monumentally meta moment from Kat Dennings’s Darcy Lewis, who blurted outloud the aforementioned question that we as the audience—who are watching the show’s SWORD audience watch the show within a show—were all asking ourselves about the recasting of Pietro. In doing so, she provided the MCU the first canonical acknowledgement of one of its recastings; a moment that could bear implications—of a retroactive variety—it is own right.

Elizabeth Olsen’s Wanda Maximoff, who first made impact in the MCU—by way of an introduction in Captain America: The Winter Soldier’s mid-credits teaser a year earlier—in 2015’s Avengers: Age of Ultron, was introduced alongside twin brother Pietro as young Sokovian HYDRA operatives who were manipulated into being experimented on by Wolfgang von Strucker with Loki’s scepter—specifically the Mind Stone it housed—which bestowed Wanda telekinesis and telepathic manipulation and Pietro super-speed. That backstory, however, was a workaround from the pre-Disney-acquisition movie rights to their traditional status as mutants who debuted in the pages of X-Men, a Marvel property whose film rights were held by Fox in a dynamic that limited how the MCU could portray those characters, and even forbade usage of the very term, “mutant.”

Therein lies the surreal nature of Pietro’s arrival on the series, since Peters’ version is not only a member of the heretofore MCU-forbidden species, but is—as he learned in 2016’s X-Men: Apocalypse—the son of an intrinsically-X-men character in Magneto. Yet, we’re still not quite privy to the nature of Wanda’s bizarre sitcom fiefdom, only with a vague scientific explanation that she’s controlling CMBR (Cosmic Background Radiation) to manipulate reality within the confines of the Westview anomaly. Consequently, while this newcomer clearly looks like the Pietro from the Fox movies, his new existence—akin to rapidly-growing twin sons Tommy and Billy—connects to this proverbial matrix. Yet, Wanda didn’t simply conjure the Pietro she knew (Taylor-Johnson’s Age of Ultron version), and was genuinely surprised by him, which seems to indicate that she’s losing control of the phenomenon, and may have unwittingly yanked X-Men Pietro from the multiverse, a concept that could figure prominently when she appears in upcoming movie sequel Doctor Strange in the Multiverse of Madness. Moreover, the fact that Darcy—who was monitoring the scene from outside the anomaly—actually understood that this wasn’t MCU Pietro might just indicate that the reality-altering effects of the event are being contained within Westview… at least for now.

Consequently, by the time WandaVision reaches the inevitable moment in which Westview—Wanda’s reverse Faraday Cage of sorts—collapses, the barrier containing her hex-powered quantum alterations would, theoretically, no longer protect the outside world from its distributive effects on the timeline. Thus, in a manner akin to Marvel Comics’ House of M storyline, Wanda could not only end up reshaping the reality of the present, but the past as well; an event that could (emphasis on “could,”) eventually be used to canonically reconcile the various aesthetically unpleasing inconsistencies we’ve seen across the MCU, most notably the instances in which major characters were recast. As we saw with DC’s Crisis on Infinite Earths (both the comic storyline and the CW television event), changes to the ever-fragile timeline often leads to the creation of people who are, for all intents and purposes, are the same person, but are physically different, perhaps due to timeline variables connected to their conception. Therefore, just as the title indicates, this initially-unassuming Disney+ television vehicle might just end up providing an invaluable plot-driven explanation for the MCU’s recastings!

Of course, the conventional industry move of recasting characters—a practice long-associated with soap operas—is hardly a new concept to the MCU, and even goes back to 2008 launcher Iron Man, in which Terrence Howard played James Rhodes (complete with an auspicious War Machine teaser moment), until the specter of studio politics and star-power-centric wage disputes led to an acrimonious exit. He was abruptly recast for 2010’s Iron Man 2 with Don Cheadle, who has been fielding the part ever since across the MCU’s lucratively groundbreaking moments, and will apparently do so again with an appearance on March-scheduled series The Falcon and the Winter Soldier. Moreover, the MCU’s 2008 sophomore effort, The Incredible Hulk, saw its A-list headliner, Edward Norton, recast with Mark Ruffalo for 2012 megamovie The Avengers, and, like Cheadle, he has reaped the wanton benefits with successful reprisals ever since.

Hugo Weaving also put in a spectacular villain performance as the Red Skull in 2011’s Captain America: The First Avenger, but eventually soured on Marvel, leading to an uncannily evocative Red Skull performance by Ross Marquand in 2018’s Avengers: Infinity War. The list goes on with the original Thor’s Fandral, Josh Dallas, who would be recast in the 2013 sequel by (eventual Shazam star) Zachary Levi, and—in a recent development—Emma Fuhrmann saw her Avengers: Endgame role as a teenage Cassie Lang (minor as it may have been,) slip away, with Kathryn Newton having been cast as Cassie for 2022-scheduled sequel Ant-Man and the Wasp: Quantumania. One could even point to the MCU’s ultimate big bad, Thanos, as a tangential example, since he was first played by Damion Poitier (sans lines), seen in The Avengers’ mid-credits scene, only to have Josh Brolin take over the role two years later, starting with the mid-credits scene of 2014’s Guardians of the Galaxy, which subsequently yielded iconic results.

Accordingly, while the reality-altered WandaVision originally seemed like a bizarre, artfully-indulgent way to launch Phase Four of the MCU, it might just end up being the perfect vehicle to not only neatly reconcile the canonical contradictions that have existed (the recastings), but also handle the array of unfathomable game-changers on the horizon now that the X-Men (and Fantastic Four) side of the Marvel Comics mythos is on a collision course with the once-insular 13-year-old Marvel Studios multimedia franchise.

WandaVision, which is now past the halfway mark of its 9-episode run, continues premiering new episodes Fridays on Disney+.