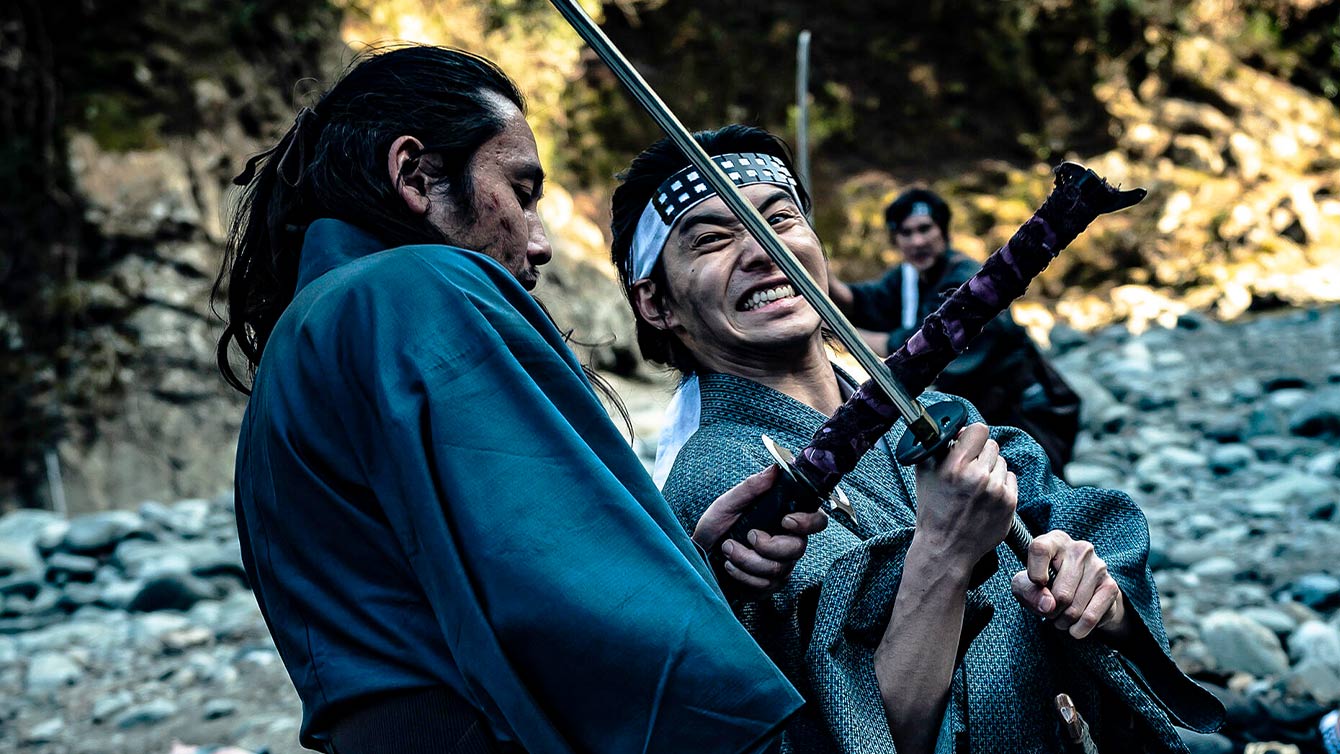 When it comes to action choreography, any long take sequence that lasts more than a few minutes is an achievement. Stunts and fights are risky. They can even be deadly. The longer the scene, the more chances of an accident. But a 77-minute one-er? That’s just crazy.

Talented filmmakers strut their stuff because the technical skill behind a good one-er demands next-level directorial and choreographic mastery. Setting up a long take scene is exponentially more challenging than a normal scene with cuts. For example, the short one-er that opens Lindsay Vonn’s new Amazon Prime reality game show series The Pack only runs a few minutes and is split by a cut in the middle, but it took 26 hours to prepare, film, and strike the sequence. Plus they had to shut down the 110 Freeway to film it.

The extensive long takes in Alejandro González Iñárritu’s Birdman and Sam Mendes’ 1917 have won international acclaim, Oscars, and other notable awards. Asian cinema has also been delivering some impressive one-ers. Standing out among the rest is rising director Bi Gan, who blew his entire budget for his second film Kaili Blues just to create a complex 42-minute long-take sequence. He topped that with a convoluted 59-minute one-er in his last film, Long Day’s Journey Into the Night, in 3D no less. It was such a remarkable achievement in filmmaking that it was recognized by Cannes.

Making the Cut Before Someone Gets Hurt

Action one-ers are the most challenging because so much can go wrong in fight choreography. There’s no room for error. Even with regular action sequences with plenty of safety edits, stunt people can get injured, even killed. This makes action one-ers shorter, but far more intense, especially from a technical standpoint. Although there is a place for good wire-fu, martial arts fans have the highest admiration for fight scenes grounded in reality so when actors can pull off long complicated fight scenes, it’s a testament to pure skill.

Recent Hollywood action movies have embraced long take fights with films like the Keanu Reeves John Wick films. That franchise is directed by Chad Stahelski whose background is in stunt work. Director Ryan Coogler delivered some gripping long-take scenes with the Casino fight in Black Panther and Adonis’ first fight in Creed.

These recent one-ers stand on the shoulder of past ones, so cherished by action fans that some have their own nicknames. John Woo’s Hard Boiled included a 3+ minute single-tracking take known as the “hospital scene.” It’s a wild piece of Woo’s signature balletic gunplay that is off-the-rails ballistic and explosive. And that film was shot in 1992, long before CGI allowed such destruction to be faked. According to film lore, the scene was originally meant to be 5+ minutes but the crew couldn’t sustain it.

Chan Park-wook’s Oldboy included a 3+ minute brutal “hallway fight” that allegedly took 17 takes over 3 days to capture. It’s an incredible piece of ultraviolence that gave new meaning to hammer usage. It’s even more impressive considering that actor Choi Min-sik didn’t come from a martial arts or stunt background. He learned his fighting skills specifically for that film. Oldboy was also recognized by Cannes for its daring filmmaking.

Tony Jaa’s legendary 4+ minute staircase fight in Tom-Yum-Goong (a.k.a. The Protector) took a month to prepare. According to Jaa, they got it in 8 takes, but they could only attempt 2 takes per day because it was so complicated. Jaa also claims they would’ve gone longer but were hampered by the how much film their camera would hold. Today’s digital recording allows one-ers to go much longer than in the days of film. In 1948, Alfred Hitchcock’s groundbreaking long-take film Rope! was limited to one-ers under 10 minutes because that was the maximum length of film in his camera magazines back then. Digital filmmaking has no such constraints and today’s directors are exploiting this.

Crazy Samurai: 400 vs. 1 is a fictional story about Japan’s most famous sword saint – or Kensei – Miyamoto Musashi (1585-1645 CE). The original Japanese title is Kyo Musashi (Kyo means “crazy”) and an alternate anglicized title is Crazy Samurai Musashi. However, beyond the name, this is not any sort of biopic of Musashi. The real Musashi was undefeated in 61 duels, and although that falls far short of 400, that’s the most documented victories of any swordsman in Japanese history.

Musashi’s first duel was against Arima Kihei. Musashi accepted a public challenge from Kihei and beat him to death with a bo staff. That was when Musashi was only 13. Musashi went on to write one of the most venerated treatises on swordsmanship of all, The Book of Five Rings.

However, if you’re looking for Musashi’s history, Crazy Samurai: 400 vs. 1 isn’t the film for you. This film is about fight choreography. Crazy Samurai: 400 vs. 1 clocks in at 92 minutes total running time. Subtract that 77-minute fight scene and that only leaves 15 minutes for story development. The premise is established within the first 8 minutes.

Musashi (Tak Sakaguchi) has killed Seijuro Yoshioka, and the Yoshioka clan wants revenge. Anticipating Musashi to answer a challenge, the clan lays a trap. The new head of the clan is a prepubescent boy, Matashichiro Yoshioka (Kousei Kimura), and the clan sets him up to challenge Musashi to regain the clan’s honor. But it’s a ruse to ambush Musashi at a dueling field with 100 of their students and 300 mercenaries. A white moth flutters by. In Asian culture, white moths are messengers of death (some claim this underpins the Kaiju monster Mothra). Then Musashi enters and the sword swinging craziness begins. That’s all we get for story development.

Anyone familiar with Musashi’s real history recognizes that Crazy Samurai: 400 vs. 1 is loosely based upon his battle with the Yoshioka clan. In a series of duels, Musashi defeated the Yoshioka brothers, Seijuro and Denshichiro. The clan did use Matashichiro as bait to lure Musashi into a trap. A retinue of followers lay in wait to ambush Musashi, but there weren’t 400 of them. Musashi arrived late, launched a surprise attack, beheaded Matashichiro, and then fought his way out.

The battle against the Yoshioka clan occurred when Musashi was turning 20 and allegedly inspired him to invent his signature two-sword method of fighting known as Nitenichi (Two Heavens are One). Within the 77-minute fight, Sakaguchi does demonstrate a few instances of double sword play, however the bulk is single sword work. Two swords are twice as heavy as wielding one, so this was surely a strategy to conserve Sakaguchi’s energy so he could go the distance.

Beyond that, Crazy Samurai: 400 vs. 1 offers a few more Musashi Easter eggs. Most of the battle consists of hordes of hapless swordsmen rushing Musashi only to get cut down in a few strokes but there are some more notable opponents plucked from Musashi legend. Separating the horde of ambushers are a few distinguished fighters who declare themselves to Musashi before engaging him one-on-one.

His first duelist is Nanpo Yoichibei, who is mentioned as part of the Yoshioka clan in Eiji Yoshikawa’s timeless novelization Musashi.  Shishido Baiken (Akihiko Sai) is his second challenger and he fights with a kamagusari (sickle and chain). There are stories about Musashi facing a kamagusari wielding fighter named Shishido, but they aren’t verifiable. Ueda Rhohei (Kazuto Nakamura) is a fictional character from Vagabond, a popular manga based on Musashi by Takehiko Inoue.

Tak Sakaguchi often just goes by TAK (and yes, that’s in all caps). This is how he is credited in Crazy Samurai: 400 vs. 1. TAK claims to have been an underground street fighter until he was discovered by firebrand director Ryuhei Kitamura. Kitamura cast him in his debut role as Prisoner KSC2-303 in the zombie Yakuza cult classic Versus in 2000. Since then, TAK has worked in nearly 50 action films in roles ranging from actor, director, writer and of course, fight choreographer. Beyond several collaborations with Kitamura, he has also worked with film maverick Sion Sono. The concept for Crazy Samurai: 400 vs. 1 came from Sono. Sono and TAK planned a project together called Kenkichi, which was to feature a long one-er, but the film was never made.

Crazy Samurai: 400 vs. 1 is directed by Yuji Shimomura, who like Stahelski, has a background as an action director or fight choreographer. In 2019, Shimomura and TAK partnered for manga-based actioner Kingdom. They filmed Crazy Samurai: 400 vs. 1 nine years ago. It was completed two years later, but it languished in storage until last year. Albatros, an independent distributor, showed last August in Japan, but given the pandemic, it was only presented on 50 screens. The film performed poorly at the box office and received mixed reviews. Critics who were unimpressed by fight choreography panned it and rightly so. There’s not much here beyond a marathon fight scene.

Despite its shortcomings, any genuine fan of fight choreography must bow down to what TAK and Shimomura have achieved. Within the first five minutes of shooting, TAK took a hit that broke some of his fingers. In later filming mishaps, he also broke some ribs and some back teeth. Despite his injuries, he managed to fight through it all, cutting through a ridiculous number of assailants, and his pain and exhaustion is palpable.

Remarkably, there are very few moments where a digital stitch might have been inserted. A common trick with one-ers is to pan across something static like a wall. That can hide a cut in the action. There aren’t very many of these – a few walls and a shot of a dead body – but for most of the 77 minutes, moving actors are in frame.

The fight choreography is simple, practical, and somewhat repetitive. It’s choreographed for the long haul. TAK’s Musashi usually adopts variations of hasso or waki stances which place his sword on the right side of his body. It’s an invitation for his attackers to come at him on his left side to which he responds with a lot of spanking parries. He deploys many ripostes repeatedly – a standard cut to the head or belly, a cut to the leg, a common move from Kendo where the right hand releases its grip to lengthen a strike with using the left hand. There are several scenes where about half a dozen swordsmen charge Musashi one by one, each to be cut across the gut in succession.

This is not the sort of flowery swashbuckling flourishes shown in most sword fights. To endure for that long, TAK relies on techniques that are simpler and, in many ways, more real. If an uninitiated viewer doesn’t grasp the tremendous staying power of TAK’s performance, they will leave unimpressed. To martial arts practitioners, TAK’s use of feints and his control of distance are superb. And anyone who has worked out for an hour straight will be humbled by TAK’s stamina.

After half an hour, Musashi takes his first water break. Bamboo thermoses are stashed throughout an abandoned village where much of the fight takes place, along with snacks and fresh swords. How those got there is never explained in the film, but it makes perfect sense from a choreographic standpoint. TAK had to pace himself to make it through. The rest of the fight is choreographed so TAK gets a water break every five minutes or so.

Crazy Samurai: 400 vs. 1 isn’t a film for everyone. As a film, its storytelling is sorely lacking. However, for genuine connoisseurs of action cinema and fight choreography, it is a masterpiece.