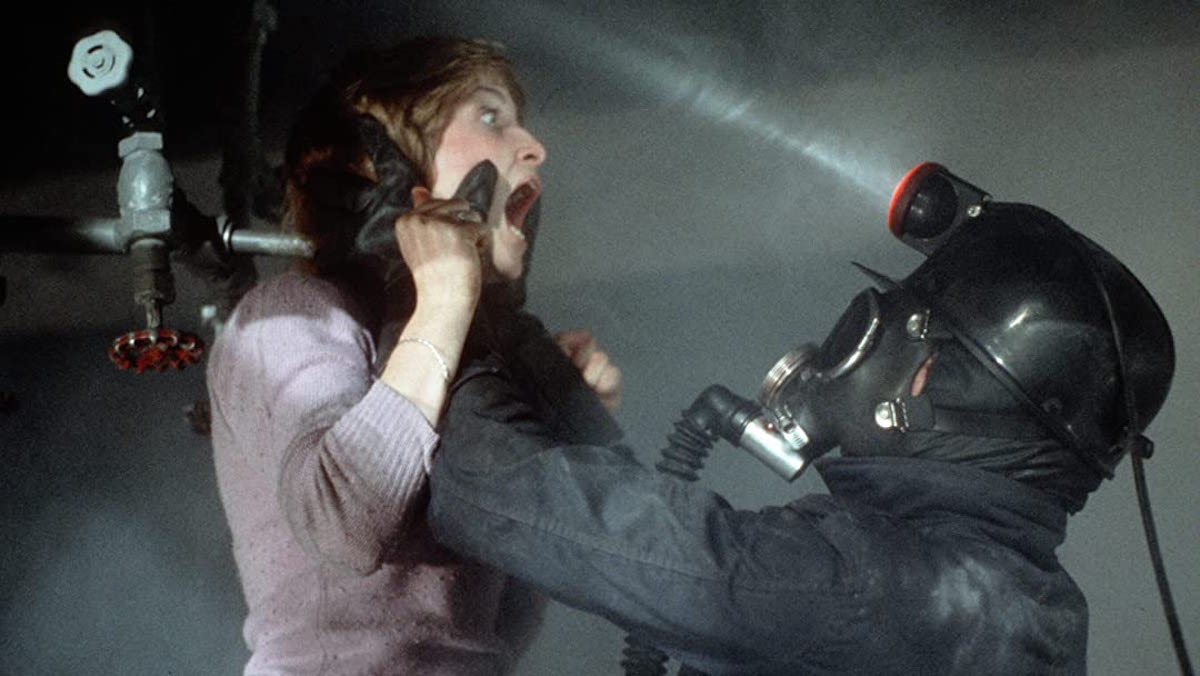 Just when you thought slasher movies couldn’t get any lower, My Bloody Valentine dug a mineshaft. A deep pit in the caverns of taste. Date movie? My Bloody Valentine was the antidote to Hallmark cards. The main suitor didn’t wear his heart on his sleeve; he bled it out with every candy in the box. Hence why critics weren’t so sweet on the slasher flick when it first came out in 1981, labeling it excessive and derivative.

Nevertheless, the movie has amassed a cult following, and did indeed add subtle innovations to the genre. Is the ‘80s horror offering the low-point of slashploitation or were the reviewers merely suffering overkill fatigue? Quentin Tarantino claims this is his favorite slasher flick, which could be used as an argument for either side.

My Bloody Valentine is celebrating 40 years right now, which is apt for the movie’s plot. According to the inner logic of the film, its small Canadian mining community, Valentine Bluffs, is due for another homicidal rampage in 2021. Indeed, the town apparently throws a Valentine’s Day ball every 20 years. And each time they throw one, the dance card gets drenched in blood.

In George Mihalka’s film, the last time the town threw a Valentine’s Day dance in the ‘60s, so many people left work early there was a horrible mining accident. There was only one survivor, Harry Warden (Peter Cowper), and he survived on a strict diet of his fellow miners. Once you’ve tasted the flesh of your coworkers, it’s tough to settle for the breakfast special at the local greasy spoon. So he is obligated to go on a killing spree.

And he is not a picky killer. Here is a movie murderer who doesn’t limit his victims to cheerleaders, lovers’ lane parkers, or hitchhikers. He kills old ladies, middle aged foremen, young hot dog aficionados, and amateur plumbers. He doesn’t care! He may not even know he’s doing it, because he spends half the movie in a miner’s helmet with the light off.

My Bloody Valentine hit theaters during the first wave of slasher films, and helped build the archetypes while borrowing from its predecessors. The first-person camera shots from the killer’s POV come from John Carpenter’s 1978 classic Halloween. But the film resembled Friday the 13th so much that the mining assailant could have been a copycat killer making due with tools from work. The slasher is masked, and the killings defy laws of physics, as well as homicide ordinances. To make sure no one misses the point of its derivativeness, the Valentine’s Day of My Bloody Valentine falls on a Saturday the 14th.

Slasher flicks are like any other procedural, as the Scream franchise brilliantly exploited. The movies were made on small budgets but packed theaters and sold popcorn, often twice because unexpected jump scares were designed to send kernels flying. Paramount Pictures picked up My Bloody Valentine hoping to capitalize on the success of Friday the 13th, which pulled in $15 million. My Bloody Valentine barely sold two million tickets in North America. It didn’t make enough to warrant a franchise.

It looked like slasher films reached a saturation point in 1981. After the assassination of John Lennon,film companies faced pressure to tone down the gore. The MPAA demanded heavy cuts to My Bloody Valentine, as well as that year’s The Prowler and The Burning, which had special effects by Friday the 13th‘s Tom Savini, and contained the feature film debuts of Holly Hunter and Jason Alexander. It was also the first film produced by Bob and Harvey Weinstein.

The MPAA ordered trims to every death sequence in My Bloody Valentine before considering it for an R-rating. Even after cutting the film to match the requirements, the MPAA returned an X-rating and demanded further cuts, ultimately resulting in the loss of nine minutes of violence. The film suffered doubly, because besides eviscerating the work of legendary makeup effects designer Tom Burman, whose techniques were trailblazing at the time, many of the gorier scenes were transitional to other action, leaving viewers unintentionally disoriented.

Hungarian-born Canadian filmmaker Mihalka’s previous movie was Pick-up Summer, a Canuxploitation teen sex comedy. My Bloody Valentine followed the Canadian horror tradition brilliantly set by Bob Clark’s Black Christmas (1974). One of the first slasher films, it is more terrifying than gory, with tension rising in waves. It came out the same year as The Texas Chain Saw Massacre, which was the most commercially successful horror film since The Exorcist. As a genre entry, My Bloody Valentine didn’t plumb new lows. Maniacs have been seeking revenge since The Terror (1928), and slashers have been elementary in homicidal detective stories. The killer in the 1944 Sherlock Holmes film, The Scarlet Claw, used a five-pronged garden weeder.

Some of the killings in My Bloody Valentine are incredibly innovative. The slasher uses mining tools, shovels, pickaxes, nail-guns, and laundromat dryers. The shower scene dissembles Alfred Hitchcock’s most famous sequence from Psycho from the inside out. My Bloody Valentine also introduces hotdogs as a lethal weapon, inspiring future films April Fool’s Day and Friday the 13th Part 2 with relish. The late ‘70s/early ‘80s aesthetic works well, because the gas masks and boots are totally punk, and yet campy and scary.

My Bloody Valentine veers from slasher tropes by skipping sex scenes, except for one case of mistaken identity. It also includes a love triangle subplot between main characters Sarah (Lori Hallier), Axel (Neil Affleck), and T.J. (Paul Kelman). Axel takes it hard. You might say it tears his heart out to learn his ex-girlfriend is dating his long-lost best friend. Having no sex and nudity is strange for a Valentine’s Day massacre movie, but the virgin survives. So My Bloody Valentine really is a romance.

Another distinction of the film is the choice of characters. Most slasher films star teenagers or people in their early 20s. The victims in My Bloody Valentine aren’t teen scream queens; they’re young working-class adults. These are miners, not minors. In some alternative universe the film could be a parable for how young working stiffs get hacked apart by the growing pressures of adulthood.

They’re also a little tougher than the usual slasher movie victims, having hoisted sledgehammers a third of the day for most of their lives. Mabel, played by Patricia Hamilton, and Becoming Sylvia’s Helene Udy ground the film in the community. The small town setting is as stifling as the caves, though we should feel it as a close-knit and intimate community where everyone knows their neighbor. Small towns hide big secrets.

Valentine Bluffs isn’t above a little political and criminal cover-up. Killer Harry was committed to Eastfield Sanitarium under a court order, but there are no records of him on file at the institution. The security at the facility is as lax as its documentation, and the murderer gets out on the first anniversary of the mining disaster. He was captured alive after his killing spree and sent back to the institution. As the new party is being planned, as far as anyone knows, Harry is in a coma. When a cop says he must have woken up, it sounds like he got the idea from Monty Python.

But then the premise is a set-up to a recurring gag where the payoff always kills. Overlooking the Atlantic Ocean, Valentine Bluffs is a peaceful place. It has to be, almost everyone in town works at the same job, and everyone is familiar with dangerous tools. We do get a little bit of unintentional humor from the wild prophet bartender, who warns the town about the curse of crazy Harry Warden like he’s John the Baptist himself. We don’t get his head on a silver platter, though. The bartender serves himself up as a prank which foretells the killer’s second coming.

The mining disaster happened while a lot of the crew was decorating for the 1960 Valentine’s Day party. The first victims of the initial killing spree were the guys who didn’t take their work seriously: the two supervisors, whom Warden blamed for the explosion. And as far as the town slasher is concerned, the village doesn’t deserve another Valentine’s Day celebration. There’s work to be done.

The 1980 Valentine’s Day party seems like it’s taking place after enough time has passed. But once again, it’s the work ethic that comes under attack. The authorities began to get warnings to call it off. The requests couldn’t be sweeter, they come as candy-coated carnage. And the longer it takes to get the party started, the more heart-filled boxes with “roses are red” poems get delivered to the mayor and police chief.

When they finally call off the party, they don’t tell the partiers, who move the location of the dance from the town hall to the mines. After all that, about only 15 people show up to boogie down. A party in a coal mine is still a dance to the Harry Wardens of the world.

The mine setting is unique. It’s not a cabin in the woods, even though producers John Dunning and Andre Link would go on to produce Meatballs. It’s not a college campus, a setting which can be traced all the way back to George Archainbaud’s Thirteen Women (1932) and had continued through Prom Night (1980) and Graduation Day (1981) by the time My Bloody Valentine came out. Most of the film takes place in the daylight, and the contradiction is effectively jarring, rendering the constrained landscape even more claustrophobic. The mines are a presence, the tunnels provide endless possibilities.

The film doesn’t begin with the backstory. It is revealed as the story plays out, much like the ending was hidden from the cast during shooting, even though the identity of the killer is obvious by about the halfway point. My Bloody Valentine opens in the thick of things, and steadily sinks deeper into the muck.

The film may not make you shiver with fright, but it should make you squirm. With its over-the-top murders and underground aesthetic, it will never be Hitchcock’s Psycho. But as a slasher quickie, it is far from the worst of the shoddy exploitation horror favorites of the genre.

It’s a film  that delivers on all the promises of its genre: thrills, kills, and blood spills. It may not be the best introduction to sociopathic cinema, but it wasn’t even close to the worst of that year’s entries. The critics who disavowed it were suffering from overkill fatigue. Slashers were relatively new and still treated as a film fad.

The genre is still evolving, and occasionally dropping deliciously horrific treats. In every box of chocolates, there are a few pieces which don’t delight instantly. As an edible arrangement, My Bloody Valentine is a bittersweet gift idea, but it will set hearts aflutter.