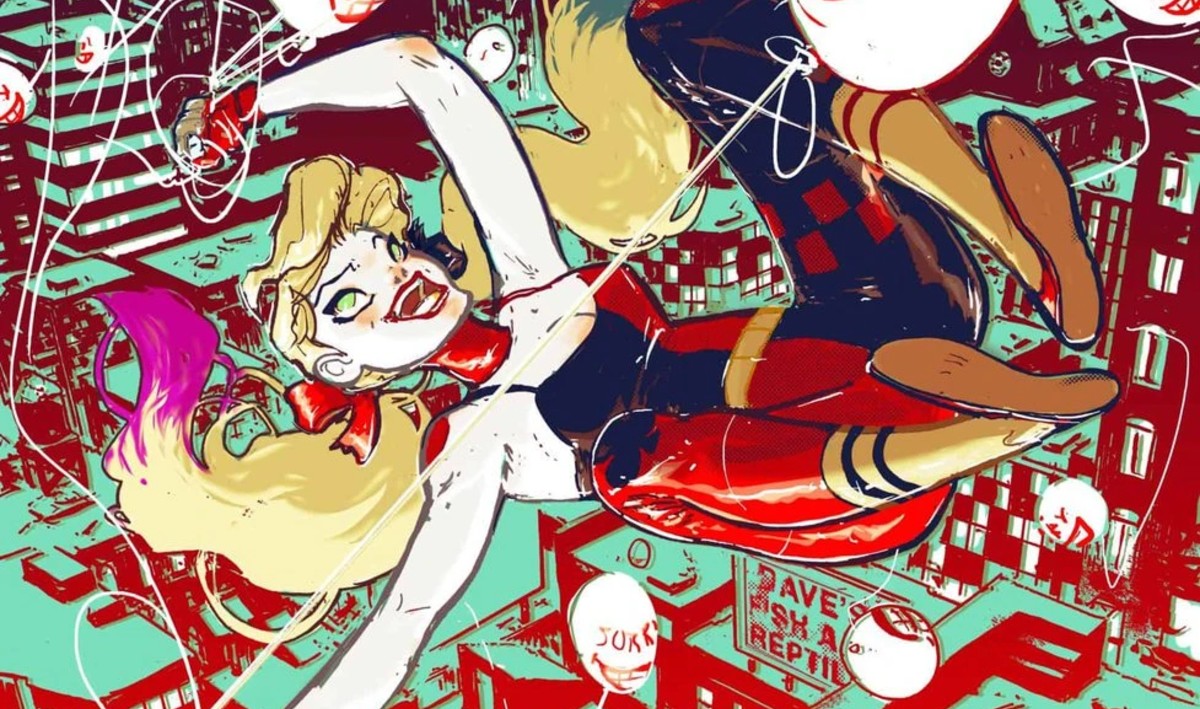 Harley Quinn is ready to make amends. After decades demolishing Gotham and decimating its citizens alongside the Joker, she’s seeking forgiveness. That’s where we find the anti-hero in Future State. The two-issue event ends this week and sets up a new status quo for the Maid of Mayhem. Den of Geek chatted to Harley writer Stephanie Phillips about Future State, Infinite Frontier, and how Silence of the Lambs influenced some of the best moments in Harley’s recent crime-fighting adventures.

Future State: Harley Quinn introduced us to a Gotham where heroes are outlawed and a militarized police force known as the Magistrate rules supreme. Within this world Harley is a woman imprisoned, literally. That is until Jonathan Crane asks for her help to catch the criminals of the city. It’s a recognizable setup, one that Phillips took directly from a classic movie.

“It was funny,” Phillips laughs. “We initially knew we wanted a Clarice. And then we were like ‘I think Jonathan Crane should be Clarice.’ I don’t think I ever expected to hear Jonathan Crane’s name used that way.”

Phillips does a great job making the setup both funny and worthwhile. And it establishes one of the most important things that the writer wanted to convey. “I really wanted to see Harley’s intelligence played up. I think one of the best ways I could think of to approach that was to give her someone really intelligent to play with to show that she’s not just outsmarting a bunch of random henchmen. She’s outsmarting somebody that academically speaking is almost her equal. We see Crane’s ego getting in the way and I think that’s a really cool element to Harley is that she’s able to read the room, she’s able to be patient.”

The dynamic between Crane and Quinn is at the heart of Future State: Harley Quinn. Witty, full of character, and perfectly paced, the dialogue showcases Phillips prowess, as does the in-depth thought process that led her to it. “I wanted their verbal dynamic to be a lot like physical sparring. When I trained as a fighter, there’s a lot of my fight style that’s based on patience. That is not my normal go-to because I just want to get in the ring and punch somebody. But the style I trained in is very much you reading the enemy and using that against them. And I wanted to show that Harley can do that in a very intelligent way. So I tried to make their dialogue very much like they’re in the ring doing that dance, whether they’re actually throwing punches or not.”

Of course, just like Hannibal before her, it’s Harley who ends up besting her Clarice. And it all comes down to her smarts. “Harley is using everything that Crane gives her against him, using that to gain her freedom. I thought that was a lot of fun to write that way with Harley because we see her solving her problems a lot with a mallet or a baseball bat which, of course, I love. And as you saw in issue two getting to finally write the line with Harley where she says ‘Now let’s smash some stuff.’ But I think it’s about having that balance with Harley.”

With the final issue of Future State: Harley Quinn out now, we leave the Clown Princess of Crime at the top of her game, having bested the boys of Gotham once again. But her story is far from over. In the Harley Quinn ongoing, we’ll see just how she got to Future State. “We’re going to see the start up of the Magistrate and the build up to Future State,” Phillips teases. “It’s fun to play with that and build up a little bit more of the humor into the ongoing. She’s definitely silly and witty, but I want to show that Harley’s humor is very deliberate and can be used in so many ways to help her read the situation and get a feel for it, based on how people are reacting to her. If you can find that weakness in your enemy–even if it comes about through making so many annoying jokes at them that they finally crack–that’s still Harley being able to push those buttons in a fun way.”

Jumping between timelines might seem a little confusing, but if you see Future State as an in medias res beginning to DC’s upcoming Infinite Frontier era, then it makes perfect sense. That said, if this all sounds very disconnected from the DC books you’ve been reading, don’t despair because Phillips was keen to explain how her Harley ongoing with Riley Rossmo connects with some of your faves.

“At the end of Joker War, Harley really takes this stance of ‘Batman has never been able to kill the Joker, I can pull the trigger, I can change this.’ And I think that sets Harley on a path,” Phillips says. “Earlier on, Punchline cuts her throat. So we have this trauma of ‘I came back to Gotham, I tried to do something positive, and it went sideways.’ But through what she tried to do to Joker, there’s a little redemption there in the eyes of Batman. So I’d say this is the most positive relationship we’ve seen between them in a while. And Harley is taking that as the momentum that she needed to say ‘If I’m coming back to Gotham, I want to do it the right way.’”

But Harley’s vision of the “right way” doesn’t necessarily bode that well for Gotham. “One of the things I love about Harley is sometimes she might say this is the right way to do the thing and the rest of us are like no!!” Phillips says. “But in her mind it makes sense. I love that she justifies it and of course her heart is in the right place. But I think that’s the fun of writing a character like this, she wants to move forward. But because it’s Harley, we’ll probably see a few steps back. She is not perfect by any stretch of the imagination, but she’s trying to be better. And I think that’s what makes her one of the most relatable characters in the DC Universe.”

While both Future State and the new Harley Quinn ongoing show a new more heroic side of Harley, she’s still the same wild child that we know and love. “Even with the kind of hero’s journey that we might be taking her on in the ongoing, I still like that there’s a very independent side to Harley. It might explore what it means for Harley to even be near the Bat Family, but she’s not really a part of it. There’s still this element of Harley standing on her own. So when I thought about where Harley is in Future State years from now, she’s very much like ‘I’m not really on anybody’s team.’ She doesn’t really agree with what Black Mask is doing. She obviously doesn’t agree with what the Magistrate is doing. So she’s like ‘You’re both idiots. I walk my own path.’ And I just think that’s Harley’s perfect message.”