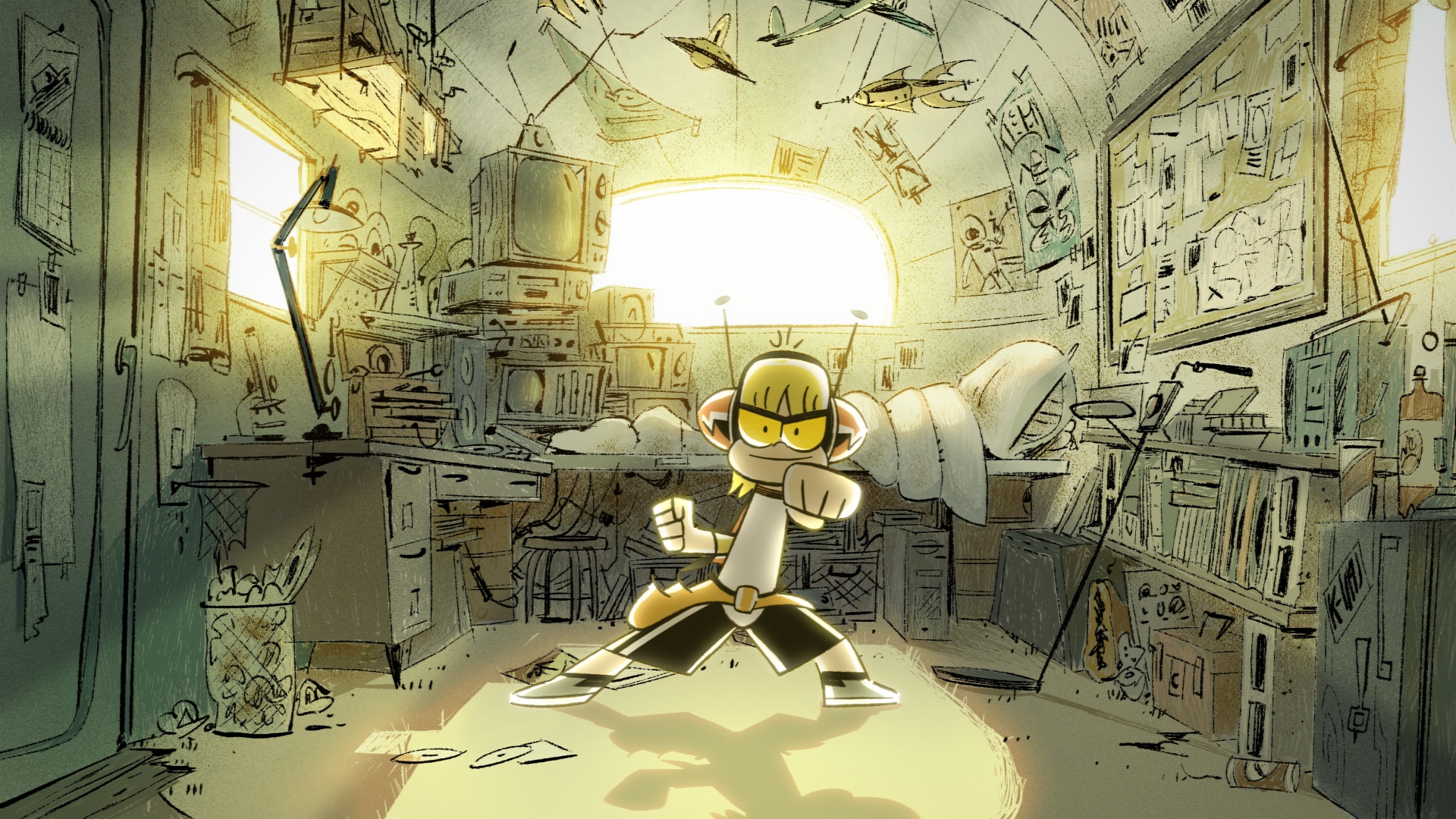 This feature contains some spoilers for Netflix’s Kid Cosmic.

After exploring the stretches of space, wonder, and imagination in shows like Foster’s Home for Imaginary Friends and Wander Over Yonder, Craig McCracken returns to the realm of superheroes with Kid Cosmic, a more direct, comic book-esque take on the genre than his first smash hit show, The Powerpuff Girls.

The show stars Kid, a young boy who finds a set of superpowered stones, and from there, all heck breaks loose. In the midst of fighting waves upon waves of aliens and creatures from other worlds, however, is an earnest, realistic story about a boy dealing with grief, and the small town that unites behind him through it all.

Den of Geek got a chance to chat with Craig over email about the show, about what it means to be a superhero, and how Netflix allowed for Kid Cosmic to explore that in a more mature, “all ages” way that’s arguably beyond the scope of most animated kids shows.

Den of Geek: Kid Cosmic is about a kid who is so engaged in comic books that when a set of super-powered stones literally lands at his feet, he wants to be a real superhero, arguably at some pretty significant costs and risk. What influenced you to come up with this specific premise? How do you view this, and the serial, thematic nature of it, against the immense number of superhero based media in the world today?

Craig McCracken: I was inspired by the supreme confidence that kids have at that age. I, like a lot of kids, dreamt of being a superhero when I was young, and in my fantasies I was always amazing and really good at it. I had that same confidence with my drawing when I was young. I drew all the time, I studied every cartoon and comic I could get my hands on, and I had the passion to do the job. I couldn’t understand why I had to grow up and go to art school before I could have that career, I was ready for the job at 12!

The answer was that I wasn’t good enough yet, I had way more to learn (still do!). So I took that personal childhood experience with my drawing and applied it to superpowers instead. The thing that I feel sets Kid Cosmic apart from other hero-based media is that it’s focused less on epic hero mythologies and more on the smaller human stories. In writing the series we always reminded ourselves it’s about the people not the powers.

Style wise, the show is heavily indebted to the classic comic book/serial look. The framing and storyboarding; the uses of fonts in the credits; the nifty end cards with the characters on fake comic books. One thing I’ve noticed, specifically, is that the movements at points were jumpy, as if frames were missing. Was that a conscious choice? Do you think that adds to the look and feel you’re going for?

A lot of the choices that we made in Kid were based on the fact that these are real people in the real world, they aren’t cartoon characters. So with the animation we avoided overly smooth and flowy actions or lots of squash and stretch, things that you associate with “cartoons.”  If an action felt natural on 3s or 4s we kept it.

New Mexico as a setting is an inspired choice. There’s something freeing about its wide expanse of desert, but also terrifying in its (from a kids’ perspective) unexplored nothingness. How do you think the setting reflects the themes?

It’s not specifically New Mexico but sort of a generic rural southwest desert vibe. It could be New Mexico, it could be California, it could be Arizona, basically it’s a remote enough place where a spaceship could crash and not a lot of people would know about it. The other thing that is nice about the desert is that it forces you to tell a story about the characters because there is no surrounding environment for the characters to get distracted by, it’s a flat empty stage to play in. It’s also alone in the middle of nowhere, sort of like Earth is in the greater universe.

This is, relatively speaking, darker than most kids animated shows. It has pretty brutal alien deaths, and while they’re dispatched in unique ways (colorful blood, “de-rezzing” out of existence), they’re still a bit more intense then what’s usually out there. How was Netflix in responding to this? Do you feel there may be a kind of commentary here on how sensitized kids may be to the kind of violence they witness in superhero comics and films?

Again that’s the reality creeping in, even though there is fantastic stuff happening, Kid Cosmic doesn’t take place in a fantasy world. Danger exists, the stakes are high. This just increases Kid’s struggle and makes it more real. At the beginning, Netflix said this isn’t specifically a “kid’s show” it’s an all ages show that can be watched by young viewers, families, animation fans, anybody. So from their perspective, anything that you might see in a big summer superhero movie was fair game.

I want to talk about the Kid himself, who, to be blunt, is a lot to handle in the first few episodes. The approach seems to be that the Kid needs to learn a lesson about humility and what it means to be a “true hero.” But I’m also fascinated by his tragic backstory. It’s portrayed vaguely, but hints at his motivation. Do you feel that keeping the specifics of what happened to the Kid at arms’ length works to prop up the theme?

I wanted to tell a story about a real kid and kids at that age aren’t perfect. They make mistakes, they may be a bit intense or selfish and are hard to deal with sometimes. It’s part of growing up and maturing. Often heroes for young viewers are portrayed as aspirational. They always do and say the right things. I wanted Kid to be more realistic and relatable.

As far as his backstory goes, my father passed away when I was 7 so what motivates Kid to want to be a hero is very close to me. We felt he should have a more sincere motivation in wanting to be a hero other than it would be fun and cool. It had to come from a real place and losing his parents and wanting to stop bad things from happening felt more true. Keeping that part of the story at arms’ length was a way to keep the overall tone of the season balanced. Even though Kid carries this real and heavy weight around with him, we didn’t want it to drag down the overall fun and energetic tone of the series.

Stuck Chuck is portrayed as the Kid’s conscious – specifically, his self-doubt, his frustrations, his lies. Can you go into more about the conception of this character?

Frank Angones, who I did early Kid development with, and I are both huge Buckaroo Banzai fans and we were talking about a scene that got cut out where after the Lectroid ship was destroyed Buckaroo found some random Red Lectroids left behind who forgot to get on the ship. We thought the idea of having to deal with random aliens was hilarious. So we applied that to Stuck Chuck, and what started out as a joke turned into an absolutely essential character. Chuck is not only a constant threat to Kid’s life but he is a constant threat to his confidence. He’s like an anti-Jiminy Cricket and is one of my favorite characters in the show.

Later in the season, there’s a big twist in who the real villains are, and in the process, the depiction of superheroic antics are pushed up to a ridiculous degree. It almost feels like a winking satire of the whole “Space Force” thing. Was that intentional? Do you think there’s a tension that exists between the depiction of superheroes and their connection, however tenuous, to a military aggressiveness that merits more discussion?

I get asked that a lot, but I came up with Earth Force Enforcement Force long before Space Force. Aggressiveness is the right word. As a fan of superheros I’m tired of being told dark stories about heroes more focused on fighting and winning wars than actually helping the innocent victims of those conflicts.  I miss good guys that are actually “good guys.”

The ending, to keep things vague, is a pretty sudden transition from the initial premise. If granted a season 2, what other themes would you explore? Do you think you’ll be able to keep a solid grasp on the true nature of superheroics, if you place them in a new setting where over-the-top superheroics would be necessary?

We want to explore other ideas of what it really means to be a hero. If season 1 was “heroes help” what other aspects are essential to be a hero? So we plan on exploring that idea but through the experience of some of the other characters. Namely how does a teenage waitress from Earth suddenly lead a team of regular people to save the universe? Again it’s about the people, not the powers.