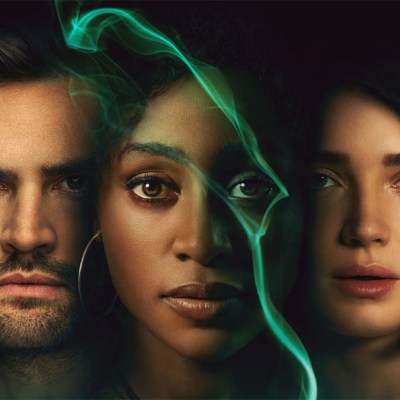 Warning: contains major spoilers for the Behind Her Eyes finale

Behind Her Eyes is the perfect duplicity-hinting title for a series that conceals what it is until the very end. The name works both for the psychological adultery thriller that this Netflix adaptation presents as, and for the supernatural story it’s really telling.

Because what’s behind her eyes, in this instance, is him. She is beautiful, wealthy Scottish heiress Adele, played by The Luminaries’ Eve Hewson. He is working class, Glaswegian heroin addict Rob, played by Game of Thrones’ Robert Aramayo. They meet as teenagers at rehab after the death of Adele’s parents, and realise that they share the ability for their souls to leave their bodies while they sleep and ‘travel’ to other places to spy on other people’s lives.

‘I love this place, I’d stay forever if I could’

Rob, who identifies as gay, isn’t content just to be a voyeur; he wants a permanent change. Obsessed with Adele for her looks, wealth and adoring fiancé David (Beecham House’s Tom Bateman), Rob manipulates her into using their power to swap bodies, then kills her and takes over her identity. He leaves his life behind to live hers, and is prepared to do anything to keep hold of it.

That includes pulling the same trick a decade later. David and Rob-as-Adele move to London for the latest in a string of fresh starts, and David starts an affair with his secretary Louise (Kiss Me First’s Simona Brown). David has been unhappy in the marriage for years, but won’t leave for fear of being implicated in the death of ‘Rob’, which he helped to cover up. Rob-as-Adele uses his astral projection power to spy on the affair from the start, and forms a plan.

As luck would have it, Louise also shares the rare soul-travelling power, which enables Rob to stage Adele’s suicide, swap bodies with Louise, and re-marry David posing as her newly stolen identity. Now in the body of another woman he’s tricked and killed, conscience-free Rob ends the series with everything he ever wanted: a new life, David, and through marriage, Adele’s money.

‘Nothing about that life I want back’

It’s a malevolent ending made all the more cruel by the existence of Louise’s seven-year-old son Adam, who knows instantly that there’s something very different about his mother after Rob takes over her body. The story ends with two women murdered, a man deceived for years about who he’s married to and having sex with, and a child’s mother replaced by the person who killed her – all so that one person can greedily live a life they coveted.

It’s a surprising ending, not just for its audacious supernatural twist, but also because of how unusually out of touch it feels with modern sensibilities. However inadvertent, the conclusions it seems to reach about gay male sexuality, trans identities and the working class threat to the wealthy all feel centuries out of date. Granted, Behind Her Eyes is a supernatural fantasy/pulp thriller, not a documentary or manifesto, but its story choices reinforce harmful myths with real-world consequences.

The idea, for instance, that gay men routinely sexually predate on heterosexual men and deceive them into sex is a corrosive one. The Gay Panic Defence has historically been used to exonerate perpetrators of violent, homophobic attacks, and the work of dismantling the myths that shore it up is ongoing. Even in a pulpy, fictional fantasy setting, showing a gay man tricking his duped heterosexual partner into sex feels… unhelpful.

Rob’s deception is made possible by a gender-transitioning body swap, a plot point impossible not to view in terms of trans identities in 2021 (or in 2017 when the book on which the show is based was published). At no point does Behind Her Eyes suggest that pre-swap Rob is a trans woman; he’s a gay man who coveted Adele’s life. Showing a character changing their birth gender for self-serving reasons of greed and personal gratification plays into the worst tabloid scaremongering. Rob’s villainy strengthens transphobic narratives about deception and misrepresentation.

One of the biggest surprises in this show’s sensational twist ending is its almost Victorian fear of the working class, largely represented by Rob. From Ebenezer Scrooge to Mr Burns, it’s practically a consensus in fiction that rich people are life’s baddies. Outside of 19th century pamphlets, villains tend to be taken from the one percent and heroes from the plucky underclass. At the very least, working class villains are granted a Joker-style revenge motive, a traumatic catalyst for why they want to eat the rich. Not here.

Rob (not just any member of the working class, but – as an impoverished heroin addict with a troubled background from a Glaswegian tenement – a full bingo card of poverty cliche) has no revenge to take against blameless Adele. She doesn’t patronise him or use her wealth to humiliate him. He simply sees what she has, wants it and takes it. It’s greed, and the body-theft a supernatural metaphor for the threat that the wealthy have historically perceived as coming from the ‘parasitic’ poor.

The same paranoia is seen in the show’s plot thread about farm boy David having been suspected of starting the fire that killed Adele’s parents. And again in the scene where Rob-as-Adele tries to buy heroin from an Islington estate and is immediately attacked by a gang. Even in working class Louise’s affair with her now-rich boss, it’s the same pattern: the poor take from the rich.

‘You kind of have this fairy tale life’

Rob’s obsession with wealth blinkers him to reality. He myopically sees Adele and David’s life only as a flawless fairy tale, callously dismissing Adele’s loneliness and the traumatic deaths of her parents. When Adele first teaches him the ability to quell his nightmares and control his dreams – a gift for which he is supremely ungrateful – Rob conjures up a manor house, a cravat and a butler. Upon his arrival at Adele’s estate, he immediately goes into an exaggerated role play as the lord of the manor. Wealth, status and being loved are his obsessions.

Later, in London, Rob-as-Adele’s fixation on beauty and appearances see him dressing almost entirely in white (the colour of the rehab uniform in which he first met, and idolised, Adele) and spending his life maintaining her athletic body and magazine-spread house.

Rob’s priorities are, to say the least, warped. He’s so desperate to escape his lonely working class roots that he does unthinkable things, behaving with brutal selfishness and a total lack of conscience. In Adele’s body, he manipulates Louise and David’s patient Anthony into falsely believing that David is a coercive, violent abuser, giving substance to yet another unhelpful real-world narrative about victims spitefully concocting false accusations. That all makes sense though – he’s the villain.

All episodes of Behind Her Eyes are available to stream now on Netflix.