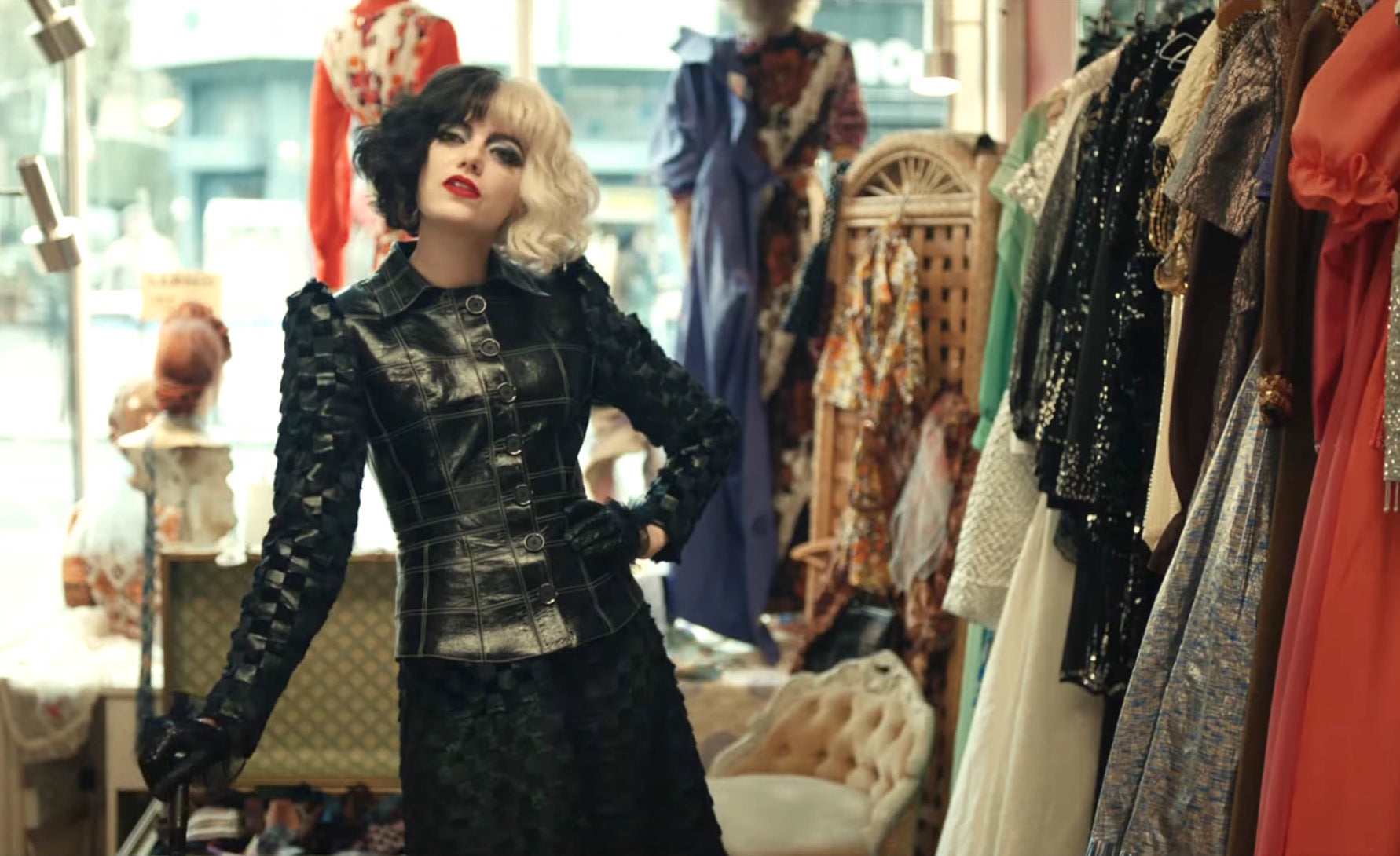 Clearly this isn’t your parents’ Cruella De Vil. This isn’t even your Cruella De Vil. However, there is something fiendishly charming about seeing Emma Stone charge into a ballroom and light her black and white dress on fire, revealing a chic red number beneath that would do Scarlett O’Hara proud. If fashion is a statement, Cruella is here to say the villain has just arrived!

Yet one can’t help but shake the certainty that by the time we actually learn the plot of Disney’s Cruella reimagining, Cruella will be in anything but black and white, or fiery red. Rather Cruella is obviously posturing to take a sideways approach to an old classic. But then again, that increasingly feels like the only direction these Hollywood redos know: the sympathetic origin story for an iconic villain.

To be clear, we’ve only gotten a glimpse of Stone as the new Cruella, and she looks absolutely fabulous in a black leather coat and cane, purring, “I’m only getting started, darling.” There’s a wildness about this interpretation befitting our current era where Harley Quinn is the hero of her own story, and Wade Wilson now leads a Disney franchise. Nevertheless, when I watch Cruella on the edge of tears in the trailer, barking defiantly that she is CRUELLA—and seemingly embracing an unfair reputation that other characters may be placing on her—a nagging question persists in the back of my head: Do we really need a sympathetic Cruella De Vil?

The trend of supervillains getting intellectual property-expanding sob stories is nothing new, be it at Disney or anywhere else in Hollywood. Maybe 25 years ago when folks liked their villains big and outlandish—think Glenn Close in Disney’s previous live-action remake of 101 Dalmatians—it was novel to see the antagonist become a tragic protagonist. But like everything else with modern blockbusters, that all changed a long, long time ago with something called Star Wars.

Back in 1977 when the original Star Wars movie was released, many audience members left the theater giddy about the world George Lucas created. In a galaxy far, far away, every pop fantasy of the mid-20th century—Wizards! Knights! Princesses! Samurai! World War II ace pilots!—was thrown into a massive cauldron that seamlessly blended these elements.

Luke Skywalker’s galaxy felt like a real place of exotic, lived-in locales, all of which captured that dirt-under-the-fingertips, tactile quality so rarely seen in fantasy stories. Sure the characters might be archetypes, but they came with histories which gave their fantasy space battles human density. Old Ben Kenobi fought in the Clone Wars with Luke’s father Anakin, who was “a gifted pilot.” But what exactly was a clone war? And why was there more than one of them? Also, what did a Jedi’s “more civilized age” look like for Luke’s papa?

For more than 20 years, no one knew the answer to those questions, which made them all the more intriguing, and the “lore” of this fantasy evermore mythic. Then came Star Wars: Episode I – The Phantom Menace, the first modern blockbuster prequel devoted to filling in the gaps left by a beloved classic’s mysteries. That movie’s problems are numerous, but at its core the most persistent, lingering issue may still be the reveal that Darth Vader was once a blonde haired little boy with the emotional range of Beaver Cleaver. Of course everyone knew in the abstract sense Vader was once a child… but did they ever really want to see it?

Additionally, did anyone really want to learn Anakin Skywalker’s reason for turning to the Dark Side is because of a bratty streak that followed him into adulthood? Probably not.

Nonetheless, all three Star Wars prequels made massive amounts of money and rather than becoming cautionary tales of what happens when you attempt to explain away all the mysteries of a beloved character, they were the first steps toward a modern staple of media regurgitation where seemingly every mug, pug, and thug would get their own sympathetic redo.

Since then, we’ve learned on screen that Spider-Man’s arch-nemesis Venom, is really a well-intentioned bloke caught in a bad romance (with his alien space buddy), Batman’s arch-nemesis the Joker is really just a Travis Bickle clone with mommy issues, and Maleficent, the reigning empress of badassery in the Disney Villain canon, was really just a woman scorned by Sleeping Beauty’s toxic father. Even Hannibal Lecter became a victim in Hannibal Rising, and the Wicked Witch of the West starred in the most popular Broadway musical of all time… where it turns out she was the hero in a conspiracy with the Scarecrow to pull one over on Dorothy.

To be clear, some of these spinoffs and reimaginings work quite well. Even if I personally am a bit chagrined at Todd Phillips’ Joker being nominated for Best Picture, Joaquin Phoenix’s sad sack killer clown created the space for a riveting performance that reminded mainstream audiences that movies can still be for adults. In another comic book movie, Magneto’s heartbreaking backstory in the Holocaust was expanded in 2011’s X-Men: First Class, which made an already relatively complex supervillain just that much more compelling in Michael Fassbender’s hands.

Overall, however, this approach has left something to be desired. And to get back to Cruella, her remix as a misunderstood tragic heroine appears to owe most of all to Maleficent. In 2014, Disney made a killing when they cast movie star Angelina Jolie as their very best big bad, a character so evil in 1959’s Sleeping Beauty that she was willing to knockoff a princess simply because no one sent her a party invite. That’s cold. And it’s wickedly entertaining. Hence why Maleficent scared and captivated generations of children.

Some characters are just too good at being bad.

The marketing of Maleficent leaned into this with a melancholic cover of Sleeping Beauty’s Tchaikovsky-inspired theme song, “Once Upon a Dream.” Now in a minor key, the new version sung by Lana Del Rey promised a scarier, more menacing version of the story, which was then confirmed by Jolie’s wonderfully devilish laugh. The big bad was finally going to have her day at the ball.

But when the movie actually came out, we learned that Maleficent was an enchanted fairy who’d been wronged. In the end, she didn’t hate Elle Fanning’s Princess Aurora. In fact, she loved the little royal and tried to save her from the curse she herself cast in a fit of justified anger. Ultimately, the sorceress adopts Aurora as the daughter she never had after disposing of her now abusive father. That’s certainly an interpretation. I guess.

It also proved massively successful in the short term, opening at a staggering $175.5 million in its opening weekend worldwide, and grossing $758 million total. Those numbers also exclude merchandising and home video revenues. If you want to know why we’re getting the punk rock Cruella, look no further.

However, did a lot of folks really like Maleficent? It made all the money in the world based on that devious marketing campaign that promised a shocking tell-all about Disney’s closest approximation to Lucifer, but by the time a sequel limped into theater five years later, relatively few seemed to still care about the misunderstood, freedom fighting warrior fairy Jolie played. Maleficent: Mistress of Evil ostensibly continued the good fight but flopped at the box office with a cume of $491.7 million, barely more than half of what its predecessor made. (Don’t cry for Disney though, as Avengers: Endgame, Star Wars: The Rise of Skywalker, and remakes of Aladdin and The Lion King in the same year made Maleficent 2 look like a clerical error.)

What this whole sputtering franchise reminds us though is that some characters are better left bad, and the mystique of the unknown is an end unto itself. While I enjoyed Phoenix’s take on the Joker, there is little argument the character was even scarier with a PG-13 rating when he manifested out of thin air, like Beelzebub, in The Dark Knight. Or to take a step away from just villains, was Han Solo really any cooler when you learned how he got his name in Solo: A Star Wars Story? Or could you have gone your whole life without knowing thanks to The Hobbit movies that Gandalf and Galadriel were kind of, sort of, just maybe friends with benefits?

The allure of Cruella De Vil is right there in her name: She’s a cruel devil. How could she not be when her entire ambition in Disney’s classic 101 Dalmatians is to skin puppies for their fur coats? Finding out she used to fight the power before hoarding it may make a lot of money, but it doesn’t make her necessarily more compelling.