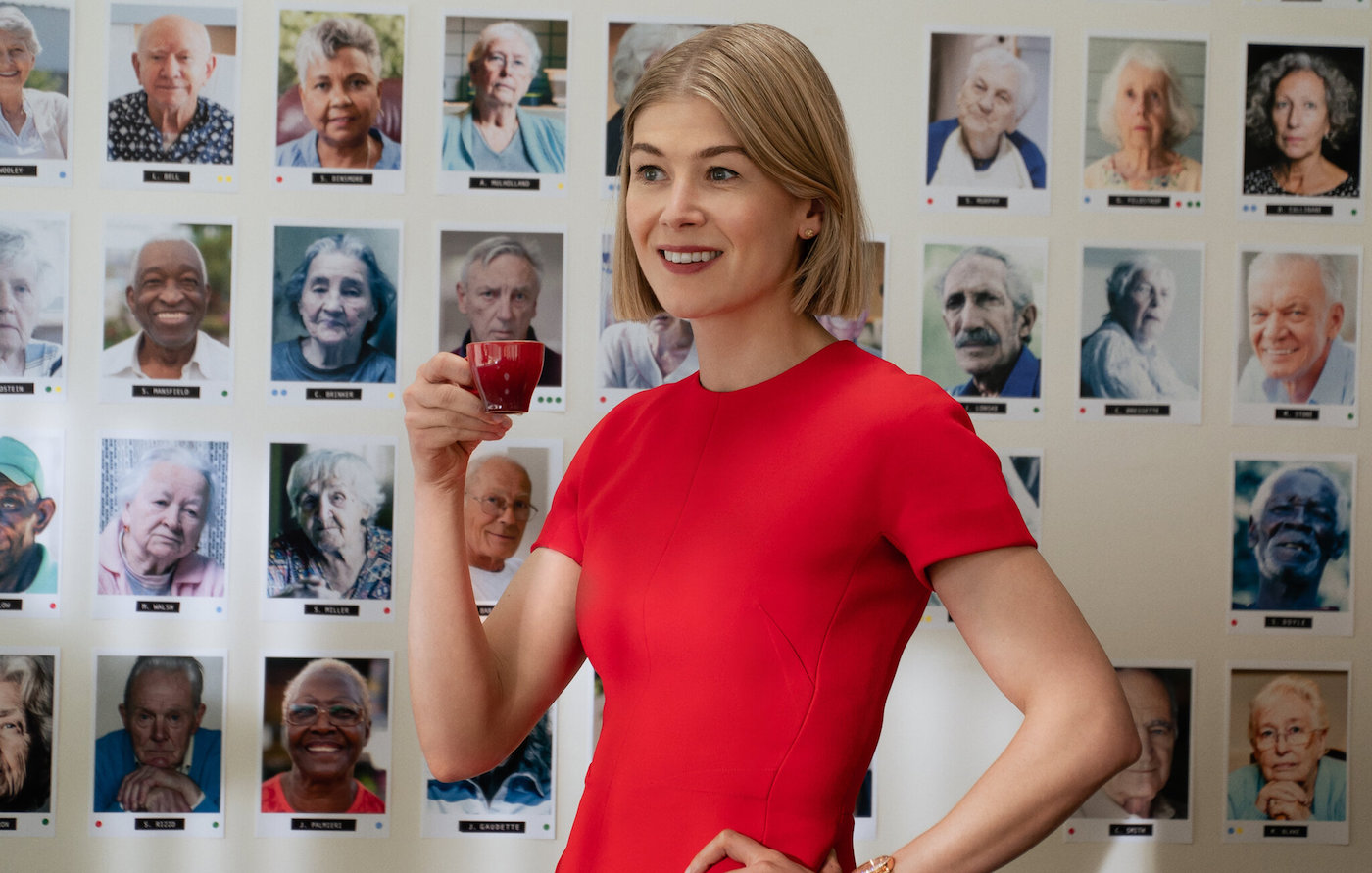 This article contains I Care a Lot spoilers. You can read our spoiler-free review here.

How odd that in the span of a couple days it seems like everyone is debating the virtues of professional guardianships and what it means to become a legal conservator. Only a week ago, Hulu and The New York Times debuted its social media lightning rod of a documentary, Framing Britney Spears, and now barely more than seven days later, Netflix is debuting J Blakeson’s I Care a Lot, a baroque comedy (or tragedy?) in which Rosamund Pike plays a professional legal guardian who cares. She cares a lot. Just not about her wards.

As becomes queasily apparent early on in I Care a Lot, the things that keep Pike’s Marla Grayson up at night are not the dozens of wards she has a legal responsibility toward, nor necessarily the employees in her company. Rather it’s her clients’ bank accounts where Marla’s interests lie; and she uses them to bill herself hourly rates and underwrites any expenses she incurs while raiding their homes for valuables.

Within the movie’s first 15 minutes, we even see Grayson’s nightmarish con in a nutshell when she has a little old lady named Jennier (Dianne Wiest) declared incompetent because of dementia. Marla shows up on Jennifer’s doorstep with the cops and a court order to lock Jennifer away forever in a nursing home, even though Wiest’s senior has never even seen the inside of a courtroom.

Can something this scandalous and awful actually happen in America? The short answer is yes.

“These stories were horrifying and not uncommon,” Blakeson told The Moveable Fest last September. “So I fell down a bit of a rabbit hole in reading about these various stories happening in various places and thought there was something almost Kafkaesque about somebody knocking on your door and just taking you away for a reason you didn’t think was valid.”

And as has become increasingly publicized in recent weeks, once you get in the system of guardianships/conservatorships, it’s very hard to get out.

Guardianships of course play a pivotal role in modern society. As a legal responsibility created to protect those deemed vulnerable due to a diminished capacity that’s left them “incapacitated” or “incompetent,” guardianship is usually taken up by family members or professionals (mostly lawyers) who agree to manage a vulnerable party’s assets, caring for their estate and possibly their day-to-day person and body. This means a guardian is in charge of their wards’ assets and finances, what doctors they see, what medications they take, where they live, and potentially who they interact with and how they lead their daily lives. One woman in this situation told The New York Times, “It’s worse than incarceration. At least in prison you have rights.”

It’s an arrangement most often used to protect elderly people who cannot care for themselves, but problems can occur when one must decide how to determine someone is “incapacitated” or “incompetent,” and whether a ward needs a guardian in perpetuity. Additionally, just how vulnerable is the position of being a professional guardian itself vulnerable to profit motive?

Most legal guardianships or conservatorships are not egregiously corrupt like Marla Grayson’s racket in I Care a Lot, and many professional guardians will note how difficult it is to manage the affairs of low income individuals who need daily assistance—or how professional guardians are required to step in by the courts when the children of elderly parents enter lawsuits against each other.

However, the details are frustratingly hard to track. The National Center for State Courts estimates the number of people in guardianships is between one and three million in the U.S., but it’s impossible to accurately measure when legal records of guardianships are often sealed and there is no standardized recordkeeping; The Times reported guardianship records are kept separately by each of New York’s individual 62 counties, with no standardized reporting on state or even city totals; and a Government Accountability Office report from 2010 revealed that “we could not locate a single Web site, federal agency, state or local entity, or any other organization that compiles comprehensive information on the issue.”

Rather state by state, and case by case, courts appear to be left to their own devices on how to handle situations—and also uncomfortably relying on what amounts to an honor system regarding professional guardians. As per The Times, the state of New York requires any aspiring professional guardian to only complete a one-day certification course, and according to the aforementioned GAO report, courts require no background checks for aspiring legal guardians. Instead they trust applicants to disclose any previous criminal convictions or recent bankruptcies.

This can create a recipe for abuse and cases as extreme as Pike’s wolfish Marla Grayson showing up at your door with a court order. Famously in New York, Judge John Phillips built a real estate empire in Brooklyn worth $20 million during the 1980s and ‘90s, which included movie theaters that became neighborhood landmarks. Yet after he was diagnosed with dementia and considered incompetent in the early 2000s, he went through a series of legal guardians and somehow was “left to freeze to death in 2008” in a facility unlicensed to treat dementia. While he declined, his guardians had been selling off theaters and various other assets to the tune of millions of dollars.

More recently, and more reminiscent of Marla Grayson, is the case of April Parks, a former Nevada legal guardian who pled guilty in 2018 to six felony charges, including two counts of elder exploitation. The full extent of her abuse, however, was laid bare in 2017 by Rachel Aviv’s harrowing reporting in The New Yorker’s “How the Elderly Lose Their Rights.”

In that piece, Aviv chronicled how Parks amassed more than 400 wards for her guardianship business over 12 years in the state of Nevada—and how each of her wards lost “nearly all of their civil rights.” This is primarily highlighted through the experiences of Rudy and Rennie North, a couple in their 70s who on a fateful Friday morning were greeted at their front door by April Parks and three unnamed associates. Parks was the owner of a company called A Private Professional Guardian—a fact she was so proud about she had her license plate read “CRTGRDN” (court guardian)—and she arrived that day with an order from the Clark County Family Court, which demanded the Norths be removed from their homes immediately.

Unbeknownst to the Norths, Parks had filed an emergency ex-parte petition in the court, which allowed her to claim the Norths posed a “substantial risk for mismanagement of medications, financial loss, and physical harm” without their presence in the court. Indeed, they weren’t even notified the hearing was happening. Parks told the court the elderly couple was at risk due to a rapid decline caused by dementia, as based on a letter from a physician’s assistant Rennie had seen once. Rudy and Rennie had never undergone a single cognitive assessment when the court agreed Parks should move the pair into a nursing home.

It was more than three days before the Norths’ adult daughter Julie Belsche even discovered where they were, with her parents’ home being left empty, causing the daughter to tell her husband she thought “someone kidnapped my parents.”

As soon as the Norths were gone, Parks went through their house with the owner of a company called Caring Transitions, which specialized in estate sales of the assets and belongings of relocated seniors. Raiding the couple’s closets and drawers, in search of paperwork and valuables, had become routine for Parks. Within a month, Parks hired Even Tide Life Transitions to sell off most of the belongings, including two Renoir lithographs valued at $38,000.

The Norths’ case was not unique. As their daughter Julie and The New Yorker eventually unraveled, Parks had wards in nursing homes throughout the county, including 10 in the one that the Norths were relocated to. Many of these seniors were declared in need of legal guardianship in hearings that lasted less than two minutes. Prosecutor Jaclyn O’Malley would later piece together for a grand jury that Parks allegedly built a network of “hospital social workers and medical staff” who helped generate client leads for Parks’ company. In one instance in 2010, the state’s attorney said Parks was “cold-calling” rehabilitation centers in search of a 79-year-old woman who had nearly $700,000 in the bank and no children.

But all of this was unspooled after years of hardship for the Norths. As per the American Bar Association, guardianship is generally “permanent, leaving no way out… until death do us part,’” and the Norths seemed to face that truth when they couldn’t even hire a lawyer to argue their case.

Their daughter also reported they were “overmedicated to the point where they weren’t really there” in their nursing home.

All these seeming horrors were committed by a sophisticated engine of care that makes I Care a Lot’s Marla Grayson appear like small potatoes. Yet the legal authority of professional guardians is so protected under the cloud of sealed documents that it wasn’t stories of glassy-eyed medication or the lack of due process that actually brought Parks down. The narrowly defined felonies she pled guilty to involved perjury under oath and double dealing in her accounting—like charging her wards $100 each for the hour it took to deliver unsolicited Christmas “gifts” of cheap socks purchased from the nearby department store.

It got Parks a sentence of 16 to 40 years in prison. Still, the most egregious cases are far from the only ones to care about, and in reality there isn’t a Peter Dinklage there to bargain for each senior who may think they don’t need a professional guardian.