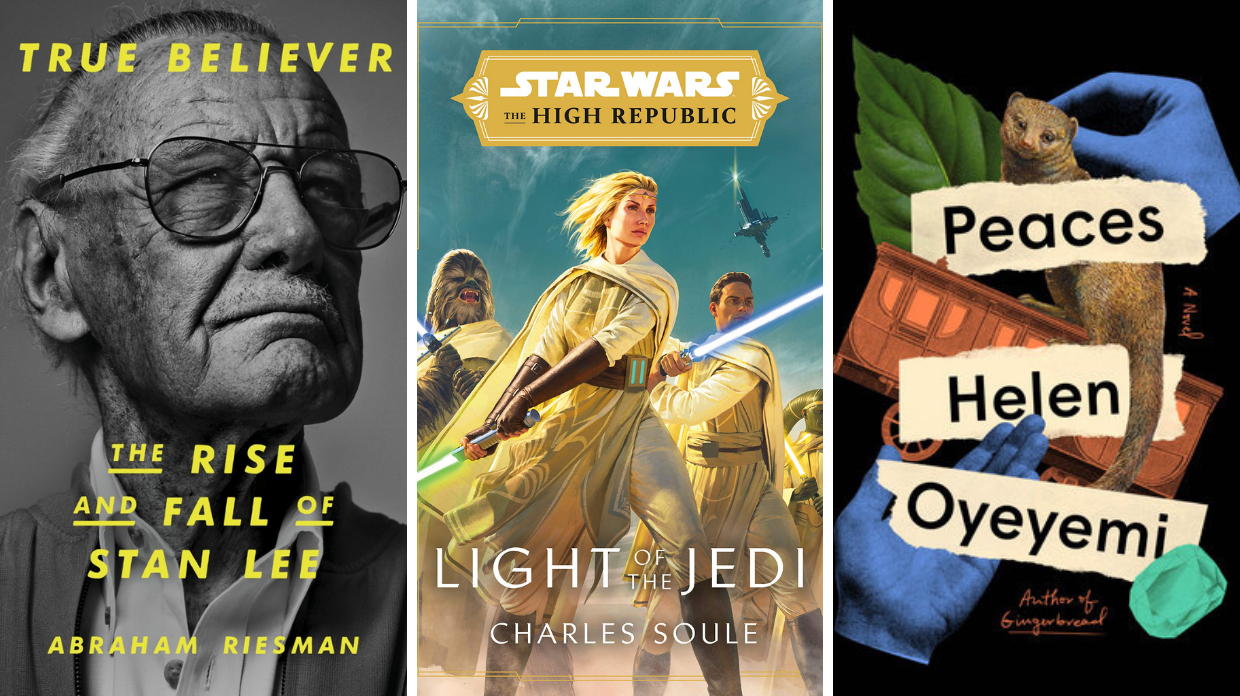 Spring has not yet sprung, but we’re getting ready for it. Between the new fiction coming from long-established speculative fiction masters to the debut books coming from some exciting new voices on the scene, there’s lots to look forward to if you are a love of science fiction and fantasy. In anticipation, we’ve compiled a list of the new books we’re most looking forward to in spring 2021…

True Believer: The Rise and Fall of Stan Lee by Abraham Riesman
Publisher: Crown
Out now

The sequel to Martine’s Hugo-winning astropolitical space opera A Memory Called Empire expands its scope to a reckoning between empires, as the conquering Teixcalaanli negotiate with an encroaching inhuman threat. Between the two interstellar powers are independent ambassador Mahit Dzmare and Teixcalaan cultural liaison Three Seagrass—along with plenty of new characters—who will need more than poetry to save Teixcalaan’s legacy.

Klara and the Sun by Kazuo Ishiguro
Publisher: Knopf
March 2

Ishiguro’s first novel since his Nobel Prize returns to a dystopian near-future reminiscent of Never Let Me Go. But instead of clones, it’s a solar-powered Artificial Friend who longs for the joy of a human owner, only to be transplanted into a grieving family. As Klara realizes her intended purpose, she proves her heart is far stronger than any human’s.

Electric Literature editor-in-chief Zimmerman wryly, intellectually, personably analyzes a dozen mythical she-monsters including Medusa, Harpies. and the Sphinx. Unpacking why female ambition, hunger, and rage often become grotesque, Zimmerman bestows heroic qualities of courage and fortitude onto these women, connecting to modern feminism’s pitfalls and triumphs. A must-read for “mythology stans” but also for those who fear women’s power.

All aboard for a fabulistic journey from the author of Gingerbread: When newlyweds Otto and Xavier (and pet mongoose) are gifted a non-honeymoon on former tea-smuggling train The Lucky Day, they embark on an extraordinary journey. From impossible compartments containing art galleries and bazaars, to a many-named stranger who knows every passenger, this is a ride like no other.

Elsa Park is an experimental physicist stationed at the South Pole to study “ghost particles,” yet also to outrun her immigrant family’s generational trauma. But when her childhood imaginary friend appears at the end of the world, Elsa must confront the specter of mental illness, as inevitable and unalterable as the Korean folklore her now-catatonic mother used to tell her.

Son of the Storm by Suyi Davies Okungbowa
Publisher: Orbit Books
May 11

Nigerian author Okungbowa’s epic fantasy series, inspired by pre-colonial West African empires, invites readers to the flourishing city of Bassa. Scholar Danso enjoys privilege and security, so long as he obeys strict familial and political obligations. But upon encountering the skin-changing warrior Lilong—a woman who shouldn’t exist—they journey to the Nameless Islands and beyond the borders of Bassai lore itself.

What spring reads are on your list? Let us know in the comments below.