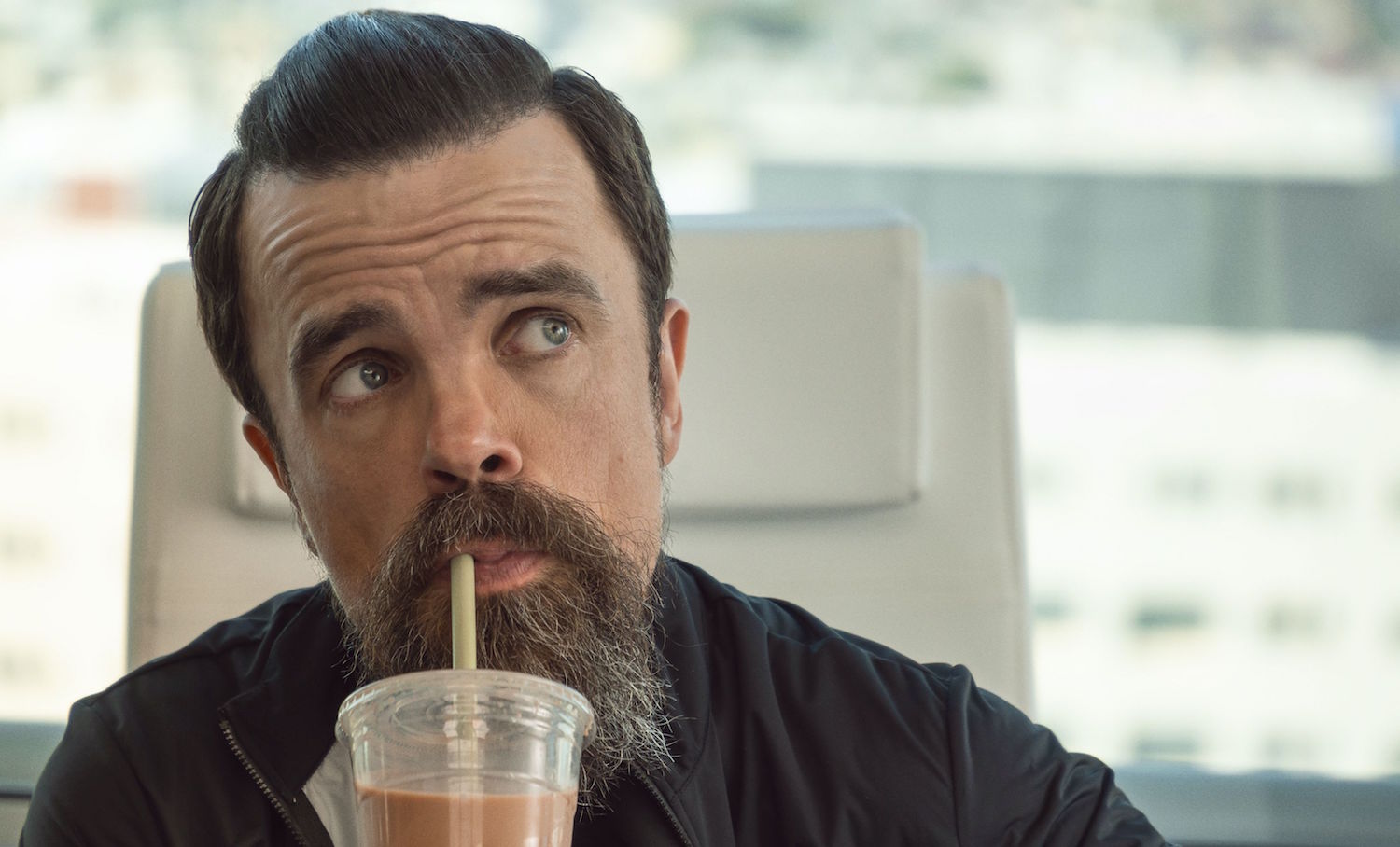 This article contains I Care a Lot spoilers.

J Blakeson’s I Care a Lot is one of very few films where everyone in it is a villain. In the lead role, Rosamund Pike ushers in a new amoral high mark as conservator con artist Marla Grayson. Peter Dinklage meanwhile mines the standard Hollywood heavy role for an unexpected haul of gangster gravitas. And with his turn as Roman Lunyov, the former black sheep of the Lannister family in Game of Thrones joins the likes of Robert De Niro, Marlon Brando, Wesley Snipes, and Humphrey Bogart as memorable cinema crime bosses.

However, this isn’t Dinklage’s first turn in a mob movie. He got his button in Find Me Guilty (2006). The film was based on the true story of Lucchese crime family soldier Jackie DiNorscio, played by Vin Diesel, and the longest mafia trial in American history. The movie was co-written and directed by Sidney Lumet, who not only helmed such crime classics as Dog Day Afternoon and Q&A, but was one of the original Dead End kids when the proto-gangster social drama was still on Broadway. Dinklage didn’t play a mobster in Find Me Guilty. He played a lawyer.

Dinklage’s Lunyov Family isn’t strictly going up against law enforcement in I Care a Lot. Rather Pike’s Marla Grayson and her partner in crime (and life), Fran (Eiza González), are court-appointed guardians from hell, and they represent a rival outfit. They are also operating a lucrative racket.

This guardianship gang war could be seen as similar to the scenarios which happened when Italian, Jewish, and Irish mobs moved in on the Harlem and Chicago numbers games in the 1920s and ’30s. Or how Michael Corleone’s first order of business as head of family in The Godfather was to take over the casinos in Las Vegas. Like Don Vito Corleone before her, Marla’s also got judges, such as the sympathetic Judge Lomax (Isiah Whitlock Jr.), in her pocket. Eldercare racketeering dominance is also comparable to the prohibition fights of The St. Valentine’s Day Massacre, and the body count is just as high. The take is just as sweet.

Edward G. Robinson set the standard for cinematic mob rule as “Rico” Bandello in Little Caesar (1931). Dinklage’s Roman Lunyov, by contrast, is more of a Czar. He heads a family in the Russian mafia and purports himself like a descendant of the Romanov dynasty. But he’s got Cossack in him. It’s in his DNA and cascading down his chin like the tail of a cavalry horse.

On Game of Thrones, Dinklage’s Tyrion Lannister was part of an insidious dynasty whose roots intertwined with every twig of the ruling class. The modern Russian mob, on screen and off, can boast even more branches.

Netflix’s World’s Most Wanted dedicated an episode to Semion Mogilevich, the reputed head of the Russian mob (aka Bratva). While Moglievich is allegedly tied to arms dealing, international trading scams, and countless murders, the cops in the documentary series compare him to the Keyser Söze character from The Usual Suspects. He’s a respected, low-key businessman who likes to smoke. He lives in a mansion next to the head of the Communist Party in Russia. His activities aren’t merely state-sanctioned, they are apparently encouraged.

Dinklage’s Roman is all these things, even as his identity is actually more elaborately guarded than Söze’s, and his tastes run toward elitist’s treats.

But then Russian mobsters are always ruthless on screen. These are the guys who killed Denzel Washington’s seemingly indestructible narco cop Alonzo Harris in Training Day (2001). You never prepare for that. When the “Three Wise Men” who always have your back tell you to skip town, you know you’re dealing with folks in a rough trade. On Netflix’s Orange Is the New Black, Galina “Red” Reznikova (Kate Mulgrew) would rather go to jail for keeping bodies on ice than say she was keeping them fresh for the Russian mafia in Queens.

Dinklage’s big bad leans into this mythic image of Russian mobsters, with Roman appearing cut from the same cloth as the New Jersey-based operators who could make even Tony Soprano take pause in The Sopranos. Albeit if Dinklage’s character ever actually visited the tough guys in the Garden State, he would probably need to rethink his man-bun. After all, Tony Soprano couldn’t even get away with shorts.

When James Cagney had fist fights in his early films, he was always matched with a bruiser twice his size because the studios thought no one in the audience would accept him being remotely challenged otherwise. Dinklage also doesn’t display a traditionally imposing physical presence. But he is no lightweight. His own thugs cower at the very thought of a cross word. In the Lunyov family, it’s best to bring a gun to a food fight.

Roman’s personal attorney almost wets his briefs when he screws up. That’s because Roman is as unpredictable as Cagney’s Cody Jarrett, the gang leader in White Heat, Cagney’s most psychopathic role. Dinklage’s introduction as Roman shows him asking how many mules died on the last drug run. He calculates them coldly, as part of business, with the sociopathology of a Chief Executive Officer. But his biggest similarity can be found in oedipal complexities. Like Cody Jarrett, Roman Lunyov loves his mother.

We don’t know much about Jennifer Peterson, the nice old lady played by Dianne Wiest. She’s got money, a nice house, no living relatives, and a doctor who will exaggerate dementia symptoms in court for a stock payoff.  On the surface Peterson seems to be a competent business woman who retired after a successful career. Now under the less than sensitive care at the Berkshire Oaks Senior Living facility, we realize her chosen field was career criminal. After all, any of these sweet old ladies could have had criminally scandalous youths.

When Marla finally asks her ward who she is, all Jennifer has to say is “I’m the worst mistake you’ll ever make.” We learn she has more than one son in the Russian mob. She could be a post-Glasnostic Ma Barker from the Prohibition era. Barker’s fictional approximation in White Heat, Ma Jarrett (Margaret De Wolfe Wycherly) tells her son she can take care of herself. And while Jennifer may have been declared legally unable to do just that in I Care a Lot, she is quite adept at a choke hold, eschewing the standard garrote assassination for her own elbow.

Marla doesn’t romanticize her mother, calling her a psychopath and offering her up as the collateral damage of closing costs. Her single-minded opportunism is more sociopathic than Pike’s Amy Dunne in David Fincher’s adaptation of Gone Girl. She employs a cutthroat logic that’s in the same territories as bad-mannered comedies, but with the ruthlessness of the shark in Jaws.

Roman’s black-on-black dress code ensembles, by contrast, broadcast a desire for stylish power games. Marla is not interested in gangster chic; she prefers classy monochromatic suits so brightly focused they attract moths like flames. Her crew is all business as usual. Dr. Amos (Alicia Witt) is the fixer. She picks the “cherries,” elderly cash cows who can be milked in the retirement home. Sam Rice (Damian Young) is the monster at the center of the center. Everyone’s got a soulless nature except Eiza González’s Fran, who is also the only one to see the wisdom of getting the fuck out of there.

Dinklage is fearsome in one of the scariest screen gangsters in recent years. This guy can dispatch troublesome community angels easier than a creamy éclair pastry–and he loves those treats. He even takes a last loving bite of a chocolate-covered, custard-filled house specialty before he tosses it onto the cold concrete of an underground parking garage.

When he ends negotiations with Marla, his only caveat is to make it look “organic.” Georgia Lyman, who is only credited as “the Assassin,” is I Care a Lot’s Luca Brasi, sharing duties with a few “heavies.” The film’s Fredo is Alexi Ignatyev, played by Nicholas Logan as if he’s always waiting for another shoe to drop. Even Ms. Peterson laughs and calls him an idiot. She laughs a lot, and it’s not just the steady drugs she’s being forcibly and legally dosed with, it’s the glee of power.

Roman’s power lies in his legal team, and the Lunyov family’s Tom Hagen is Dean Ericson (Chris Messina). One thing you have to admit with the Russian mob is they do appreciate innovation and sophistication. Ericson can’t help but be impressed by Marla’s scam. His lowball offer of $150,000 is an insult, but an understandable one. His veiled threats are as subtle as his suits are ostentatious.

“If you can’t convince a woman to do what you want,” she says, appraising the fine print under the mouthpiece’s exploratory offer, “then you call her a bitch and threaten to kill her.” Marla pays it forward by calling the Lunyov matriarch far worse and threatening extreme discomfort, which she promises will last until the day she dies. As restrained as her venom may be, Marla is a proud femme fatale. Though also a stereotypical “ice queen” villainess, and heartless materialist. We’re almost sorry to feel bad for Marla when she is tied to a chair during last minute negotiations.

Director Blakeson, who made the science fiction action movie The 5th Wave and the noir thriller The Disappearance of Alice Creed, sets up I Care a Lot like a horror movie.

“There’s no such thing as good people,” Marla Grayson says at the start of the film. The opening is exquisitely unsettling as Jennifer is guided through a process of enforced institutionalization, followed by her house being emptied, painted, placed on the market, and sold. The plot thickens as keys are traced to a safety deposit box containing millions of dollars’ worth of diamonds, which officially don’t exist. Most gangster films aren’t driven by this kind of mystery, but Roman is a new kind of gangster. Though cheap, dead drug-mules are an unnecessary expense, the Lunyov family want to make a difference in the world.

Blakeson wanted to highlight all-too true stories of elder abuse and the perils of court-appointed conservators which could even bring The #FreeBritney movement calling. But he captures the allure of the anti-hero and the all-American dream of a corner on the market. Roman Lunyov has one final thing in common with Michael Corleone, and many of the traditional gangsters: He wants to earn money legitimately. This is not to be confused with wanting to go legit.

Those of us who root for the “bad guys” will find a wealth of insidious characters, and a very original caper, at the heart of I Care a Lot. Peter Dinklage’s Roman Lunyev may go against type, with his eastern bloc nobility stunted by the limits of black comedy. But as a movie mob boss, he is Street Regal.

I Care a Lot can be streamed on Netflix.