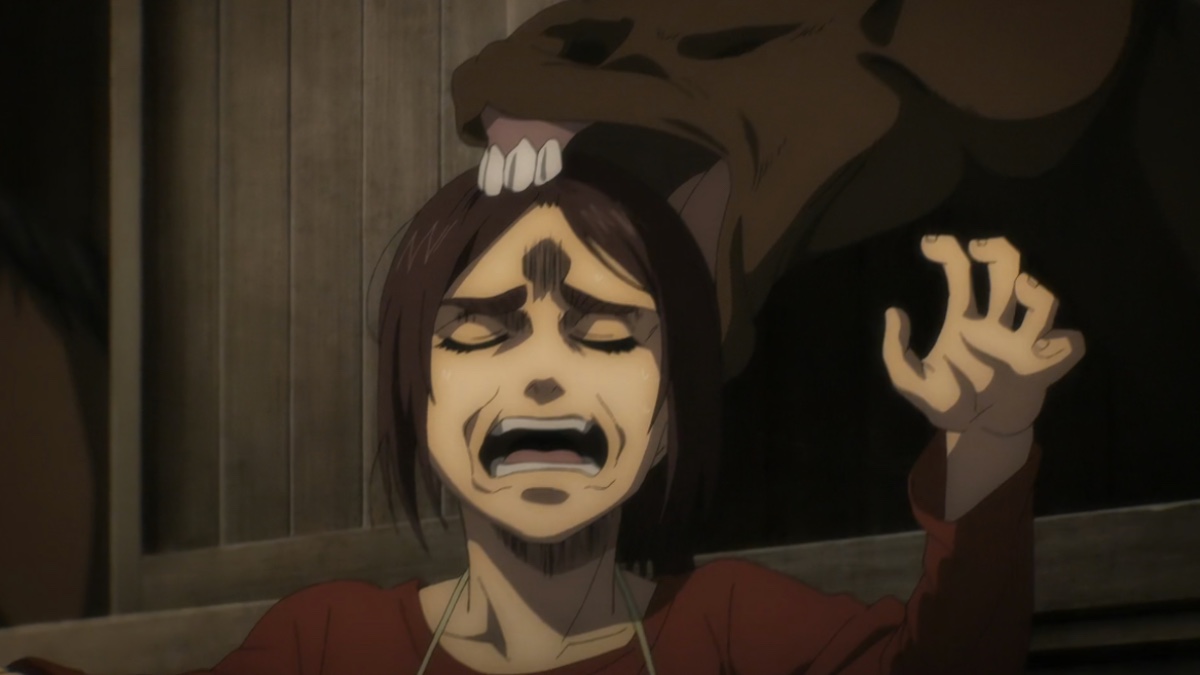 “We can’t believe in anyone…”

On its surface, the titular “counterfeits” in this Attack on Titan episode are “Mia” and “Ben,” the aliases that Gabi and Falco build for themselves while they evade Eldian capture. However, on a deeper level, Gabi and Falco’s very people and cause are counterfeits. The whole operation is a fake. The only people in this episode that are completely honest and open are Kaya and the other Eldians that Gabi and Falco encounter. This is a world that’s full of so much deception that incredible beasts can masquerade as humans and other characters frequently lose themselves in the lies and double crosses that they pull. It’s therefore telling that the only authentic people in “Counterfeit” are the alleged monsters that Gabi and Falco have been trained to destroy.

“Counterfeit” features Gabi and Falco on the run as they trek back towards Marley. The duo experiences a more human side of the so-called Eldian devils when a kind family gives them shelter and shows them hospitality. This final season of Attack on Titan has found several ways to play with the idea that these characters don’t know the full story and that the role of villain has become fluid depending on what narrative is currently being serviced. Ever since Gabi assassinated Sasha she’s been on a very different path than Falco, but the two have still been each other’s support system in a world that makes increasingly less sense to them. The two are pulled further apart when Falco feels sympathy towards Kaya and shares the news that he learned from Eren and Reiner over Marley’s initial attack on Eldia.

Falco recognizes that there’s a human that’s in front of them, whereas Gabi tries to put up more barriers so it’s easy to preserve her view that the Eldians are monsters. She can’t allow the fire that’s been fueling her aggression to go out. It’s also just fascinating how Falco, Gabi, and Kaya all trade the fragments of information that they’ve been fed and how this is able to coalesce together and give them an accurate representation of what’s going on. Falco and Kaya can accept this flawed reality, but Gabi is now too far gone to stray from the path that she’s on.

Of course, another twisted level to all of this is that the Eldians who open their home and their hearts to Gabi and Falco are actually Sasha’s parents. This isn’t a detail that’s necessarily obvious, nor is it one that Gabi and Falco learn. This means that Attack on Titan doesn’t go full The Last House on the Left or A Clockwork Orange on these houseguests, but it adds another layer to the complexity of all of this. A nation’s ideals don’t speak for every person that lives there and it’s the perfect microcosm for how neither Eldia or Marley are bad, but there are just some bad people that come from these places. The Blouse family can run a selfless orphanage for lost children while other Eldians can scream about rebellion and threaten the government. The one thing that is common between everyone is that these people want something to believe in, but that desire is manifesting in more dangerous and unhealthy ways.

An interesting turn in “Counterfeit” is that most episodes of this nature function as a way to open up a stubborn character’s eyes. Kaya shows Gabi kindness right up until the episode’s final moments, but she doesn’t seem changed at all from the experience. It actually seems likely that Gabi could murder Kaya after she helps them get back home. “Counterfeit” doesn’t operate as the cliché turning point for Gabi’s character and it instead only horrifies Falco over his friend’s loss of innocence. It’s the same stark realization that Armin and Mikasa are currently working through with Eren and it finds another parallel between these two figures.

Eren doubles down on his dangerous compulsions and Gabi does the same as she attempts to break free of her assigned role. “Counterfeit” lingers on the fact that she likely kills the prison guard that looks after her and she’s ready to turn to murder as a solution with increasingly less provocation. Gabi’s ready to rewrite history, just like Eren, and it’s fascinating to see how Attack on Titan continues to juxtapose these narratives.

Every episode makes Eren a little more terrifying and unforgivable. There used to be a degree of empathy that accompanied Gabi and her mission, but her rage to hold the innocent responsible for the sins of their ancestors is shockingly similar to Eren’s perspective.It’s incredibly satisfying to see these two contrasting wild cards get closer to collision. At this point every moment with Gabi generates just as much electricity as the scenes with Eren. And Gabi’s still just a regular girl and hasn’t even inherited a Titan yet.

The biggest detriment to “Counterfeit” is how it remains so singularly focused on Gabi and Falco’s excursion. There are teases towards the bigger problems with Eldia and how Reiner is ready to rush into war as a surprise maneuver, even though they’re woefully underpowered and have no idea of just how deep Zeke’s plan with Eren runs. However, “Counterfeit” is another recent Attack on Titan entry that slows down its narrative and allows the material to breathe. This isn’t a bad thing, but the humanizing subject matter in this episode is something that the anime has looked at many times before. It seems like this season could move through more material at once, but with only five episodes left it’s beginning to look like Attack on Titan has another plan in store.

With the tempo that’s been established it seems impossible for these 16 episodes to cover the entire manga. What’s a lot more likely is that a ten-episode “Final Season: Part Two” will be announced, or at the least a movie or two that wraps up the material. This is purely speculation, but it’s comforting that these episodes feel anything but rushed or that important nuance is being sacrificed to cover more content. It’s just that in the case of “Counterfeit” the episode does feel a little sparse, even if it’s thematically rich.

“Counterfeit” feels like the eye of the storm in Attack on Titan’s final season. A temporary calm allows this episode to explore some satisfying material that puts Gabi, Falco, and their respective transformations in the spotlight. It’s an entry that’s bookended with conflict and it’s clear that more tragedy is ahead. “Counterfeit” isn’t the most thrilling episode as a result, but the decisions that Falco and Gabi make here are going to inform their trajectories for the rest of the season. This was their opportunity to pull themselves out of the quicksand, but now they’re sinking even deeper and they don’t even notice.