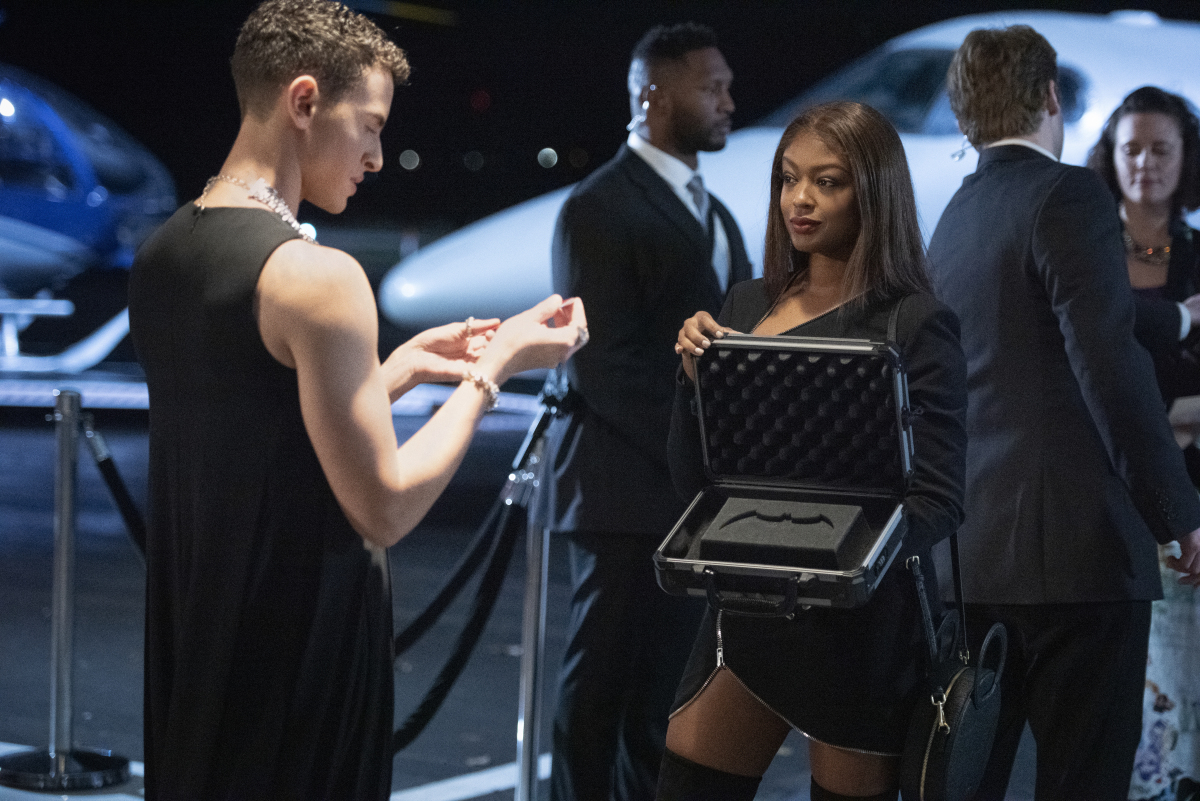 There is such a thing as doing too much, and Batwoman is on the cusp. The last two episodes have introduced two new characters, Angelique and Ocean, each with pre-existing relationships—and baggage. There are also no less than three independent, parallel searches for Kate Kane, which… *sighs*  Fine.

Angelique is Ryan’s ex-girlfriend that she caught the drug change for—a story that has some plot wobbliness. In the season premiere, Ryan said she was framed. In this episode, she says she willingly took Angelique’s drugs (to keep them from her) and was caught with them after she reacted negatively to street harassment by some Crows. While the Crows may have been on some bullshit, accosting her without cause, using “framed” to describe this interaction is, well… a stretch. I hope it’s a retcon and not Ryan’s actual interpretation of events. People are framed and people are unfairly harassed, and there is overlap, but these aren’t the same thing. Nevertheless, Angelique is back in Ryan’s life, but the circumstances that separated them might not have changed as much as Ryan believes. This romance will likely test Ryan’s commitment to Batwoman, and if the past is anything to go on, Ryan may falter.

Then there’s Ocean, Safiyah’s brother, who she sent Alice to kill. Last episode, when Alice saw a photo of Ocean, she had a flashback of him on Coryana. When she catches up to him, she doesn’t immediately kill him, and when he captures her, he has a similar flashback of her. They don’t know each other, but they clearly do. Now Alice’s attention is split between doing whatever needs to be done to find Kate, and uncovering the truth about her missing time on Coryana with Ocean. I both love a redemption arc and believe some people should just get to be bad. I think the desire to humanize and ultimately save villains is even stronger when the villain is a woman, so I am wary of how this new or rekindled romantic relationship with Ocean might be used to redeem Alice. That said, I want her to be less pressed about Kate and am happy for her to fixate on something or someone new.

There is one central mystery, which several subplots center around: what happened to Kate Kane? And another, smaller, but potentially more impactful one: what is the Kryptonite doing to Ryan? Last season, the Kryptonite shard was treated like a lethal weapon that could pierce the Batsuit and mortally wound its wearer. And it seems to be doing just that, albeit very slowly and painfully. What this means for Ryan is not yet known, but it’s clear there is something looming. And it could potentially be life-altering.

When it comes to Kate though, pretty much everything else is about her. The Crows and Alice are both taking Safiyah’s word on Kate’s wellbeing and pursuing different leads to find her. Sophie is desperate to bring back the love of her life. Alice is on the hunt for Ocean. Jacob is using The Crows’ vast resources and manpower to find Coryana, and a Jack Napier —Joker— painting seems to be the key. The overlap in interests for the Bat Team and the Crows  means Batwoman accepts a temporary alliance to infiltrate an illicit art exhibit and retrieve the painting. Of course, this is an uneasy alliance with distrust on both sides, and nothing good can come of it.

The Crows are private cops (I’m still not entirely sure how they work) and Gotham sees them like any other corrupt, law enforcing body. ACAB — All Crows Are Bastards. This episode doesn’t just say that, it also shows us one of the many ways that corruption manifests. When Wolf Spider (a known thief, one presumes) steals the Napier painting from The Collective’s exhibit, the Crows that chase him down ram him with their SUV, retrieve the painting, and leave them for dead on an isolated tarmac. If not for Batwoman already being in pursuit, they likely wouldn’t have been found before succumbing to their injuries. Ryan didn’t want to work with the Crows because of her own experiences with their corruption, and now that divide is even greater. The Crows and Batwoman will eventually come to a head, and it will be brutal.

Batwoman is not pulling back on any of its “wokeness” and it doesn’t feel disingenuous that social themes like racism, classism, and distrust in government and law enforcement are being explored. Season one did have rogue Crows operating illegally in Gotham—the same ones who murdered Lucius Fox—but they were treated like outliers and their positions and power weren’t fully interrogated. This season is taking that further, removing the degrees of separation between the Bad Actors and the Crows. This episode reminds us that even the “good” cops are still complacent and still working within a corrupt system. Sophie may have fired the Crows responsible for Wolf Spider, but it doesn’t address the root of the problem.

At the beginning of the season, I asked what Batwoman being Black might mean for her relationship with the Crows and I love that this is being explored. Ryan has her own personal history with the Crows, and it’s coupled with the Crows’ public mistreatment of Batwoman. There are levels to this relationship, and it’s all heightened when the entire city of Gotham is watching the conflict play out. I am enjoying the writing around this.

Batwoman is doing a solid job of managing its characters and weaving their individual stories together in meaningful ways, but that could easily get unwieldy. Right now, things make sense—as much as things can make sense in a comic book world— but any additional characters and subplots threaten to muddle things. The writers have to keep a firm grip on the plot, or it’ll be beyond control or comprehension. I have confidence in them, and in the show.

A relationship I am happy to see developing is the one between Ryan and Luke. Luke has valid reasons for not wanting to replace Kate, but his standoffishness has been frustrating to watch. I’m glad there is a sense of trust and camaraderie forming between them.

If Kate Kane doesn’t return [see: if Ruby Rose does not make a cameo] I’m going to feel manipulated. There were several opportunities to put Kate to rest, yet the show insists on keeping her alive in the hearts and minds of the characters and the audience. If that isn’t leading up to a definitive goodbye to Kate—and Rose— it’s going to be a goddamn bitch of an unsatisfactory situation.