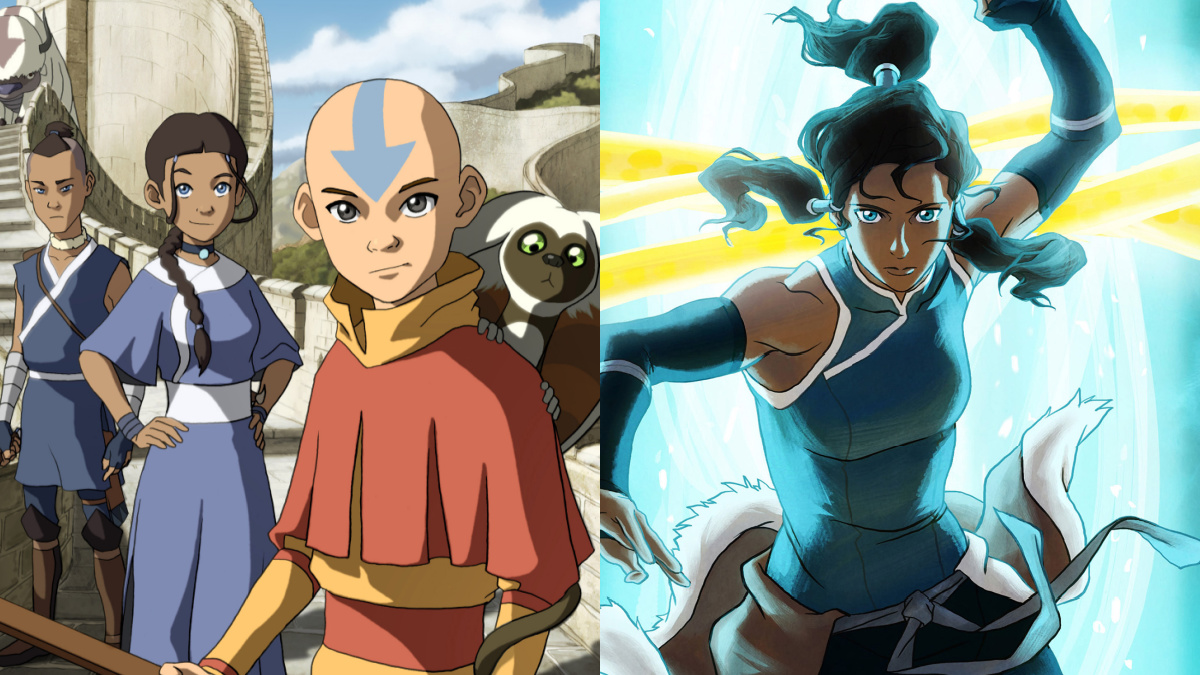 If you’re an Avatar: The Last Airbender and The Legend of Korra fan, the long wait is over. Ever since Korra went off the air in 2014 there hasn’t been a new Avatar series on our screens. We’ve gotten comics and books (which have been fantastic) but a return to the screen was always hoped for. The live-action Netflix series is still in the works but after the departure of original ATLA creators Michael DiMartino and Bryan Konietzko fans haven’t been as excited for it.

Now that excitement has somewhere to go. It has been announced that the newly formed Avatar Studios will “create original content spanning animated series and movies based on the beloved world of Avatar: The Last Airbender and The Legend of Korra.” Not only that, but we may also be getting short-form content and spin-offs!

The first project set to go into production this year is “an animated theatrical film” and it seems like the primary distribution for these projects will be Paramount+ (though they may also run on other Viacom channels) and even theaters.

This is a lot to take in. Obviously not all of these might come to fruition but with Paramount needing shows/movies and ATLA/Korra proving to be very popular on Netflix, fans can have high hopes we’ll get to see a lot more from the ATLA world.

So what could we be getting? All we know for sure is that a movie will be going into production but we don’t know what it’ll be about, nor do we know what any of these other possible series could cover. However, there are some areas of the ATLA world that are ready to be explored so we’re going to go over the ones that would be perfect for the new Avatar Studios.

In 2012 Dark Horse Comics began publishing Avatar: The Last Airbender comics which continued where the original series left off. They not only filled in the gaps between ATLA and Korra but delved deeper into the world, filled out backstories, and even answered the biggest question left dangling at the end of the series: What happened to Zuko’s mom?

Any of these stories would make fine films or miniseries, but the most obvious one to adapt would be the arc about Zuko’s mom. Many new viewers of the series aren’t aware of the comic and it would be a great chance to tell such a critical part of ATLA’s story on screen.

Without question the absolute scariest part of the ATLA universe, Koh is an ancient spirit who has the ability to steal any face of any being who shows any emotion to him. Aang memorably faced him down and barely escaped with his face, and he’s been mentioned in various other ATLA stories since then. Still, this creature is largely a mystery and a film delving more into him would provide an excellent big screen villain. After all, he did tell Aang they’d meet again. (This technically did happen in an online game but much of Koh’s appearance in that game has been lost to the sands of Internet time.)

We don’t have to learn or even see his entire backstory (some mystery is good) but getting the opportunity to see more of him is one that’s too good to pass up. Aang doesn’t even have to be the one who faces him! Koh’s line of “we’ll meet again” could apply to any Avatar. Korra could encounter him or even a future Avatar!

The Furthur (Queer) Adventures of Korra and Asami

The Legend of Korra famously ended with Korra and Asami walking into the spirit portal holding hands and it was later confirmed that they were a couple. We’ve gotten a chance to see some of this in the Korra comics (which if adapted would make great movies or miniseries’) but getting a full series that lets Korra and Asam explore the Avatar world and take on new challenges? That would not only just be a great show on its own (especially after those last two INCREDIBLE seasons we got on TV) but it’d be a chance to let Korra and Asami’s queerness be seen on screen.

Queer representation is still far too low, especially in animation, and getting to see queer characters in such a high profile franchise would do a world of good. We don’t even need them to be around the same age as they were in the show. Let’s get the 40-year-old queer and married adventures of these two!

While of course the easy options for any new Avatar media is just to tell more stories about characters we already know, Avatar Studios has the chance to continue the story well beyond what we saw in ATLA or Korra. Remember how The Legend of Korra jumped 70 years into the future after ATLA and the technology of the world was comparable to the 1920’s? Imagine if we jumped to a world that more or less matches the 1970’s? Or hell, go further! Imagine if it’s more of a sci-fi fantasy mix and we get SPACE AVATAR. Yeah, bending asteroids and using air bubbles to breathe in space.

It’d be a gamble but new Avatar mediums shouldn’t just be banking on nostalgia. It needs to move forward to ensure it’s future and a new generation of kids (or teens, whoever the show is marketed to) deserves an Avatar series to call their own.

Nostalgia is still powerful though and a no brainer would be getting the adult adventures of Aang, Katara, Sokka, Toph, Suki, Zuko, and the rest. We briefly saw flashbacks of them as adults in Korra and there’s that famous photo of them all grown up that was released when Korra was airing so why not do an adventure set during that time?

See how the changing world impacted their friendships, what it was like as technology so quickly advanced. Aang trying to be a father and not being all that successful (which we wrote about here and how it enriched his character.) His attempts to preserve air nomad culture. Toph’s lack of a relationship with the father of her children and the further formation of the metal benders. There’s just so much room to explore!

The Rise of Kyoshi Adaption

Released in 2019, The Rise of Kyoshi (and it’s sequel novel, The Shadow of Kyoshi) chronicled the life of, who else, Avatar Kyoshi. It’s a gripping tale that follows her training as the Avatar while on the run and attempting to get revenge for the death of a loved one. Its story would be perfect for two or three films and also, like the further adventures of Korra, would be an excellent chance to see another queer character in the ATLA universe. Kyoshi was established as being attracted to men and women in the Korra graphic novels and the Kyoshi novels ran with it.

Adapting books into movies is still a common practice in Hollywood so this isn’t a huge stretch. The story is already there, let’s just get it on screen!

Multiple times throughout ATLA and Korra we got to see the long line of Avatars that stretched back before Aang. Some we got to learn about but most were nameless… but what if we got to learn more? Any of these past Avatars could sustain a movie, mini-series, or show on their own but that’s a tall order for such a long line of characters. Instead, imagine an anthology series where every half hour episode could focus on one of those past Avatars. We’d learn a little about their life, see them in action, and get more pieces of the overall Avatar world. This doesn’t even have to be limited to past Avatars. You could jump forward in the future. See the Avatars after Korra, the start of a whole new line!

While these could all be done in the trademark Avatar art style and handled by the original creators, imagine if this took a more Heavy Metal or Animatrix approach? Each episode could be helmed by a different creator and animation team, all contributing their unique takes on the Avatar world in different visual styles. You could of course get famous directors, writers, actors, etc. if you wanted but more worthwhile would be making this a launching pad for new talent. Get people who are just starting out in the industry (especially diverse talent, since Avatar and Korra drew so much from different cultures) and use this as a platform to launch them to fame. With that you also get a new pool of experience to draw from and that diversity would allow all kinds of different and unique stories to be created in the ATLA universe by the people the show has depicted.

The series could even be used as a testing ground for new series, movies, etc. If one episode really hits it out of the park with fans and critics, it could be spun off into its own longer story. With such a rich history and devoted fan following, Avatar Studios could leverage the brand to do something really special that would not only give us more of the ATLA world but develop new underrepresented voices in the business.

The Return of the Super Deformed Shorts

The moment I read that one of the options on the table for Avatar Studios was “short-form content” my mind instantly remembered the adorable shorts featuring the ATLA characters that were included on the DVD’s. These were short parodies of the series featuring chibi style versions of the cast. They were hilarious, zany, and we need more of them! Give us Korra shorts too!

Things We Can’t Even Think Of

The possibilities of stories in the ATLA universe are limitless. The ideas above are only the most obvious. The stories Avatar Studios make don’t all have to involve the Avatar or even benders. They don’t have to all follow the format of the TV series’. We could get action shows, sure, but what about a soap opera? A legal drama? A space opera! Something totally off the wall that defies genre.

Anything is possible and we hope Avatar Studios will let their imaginations run wild. Whatever is made, we’re excited.